How Many Breweries in San Diego? September 2019 Edition 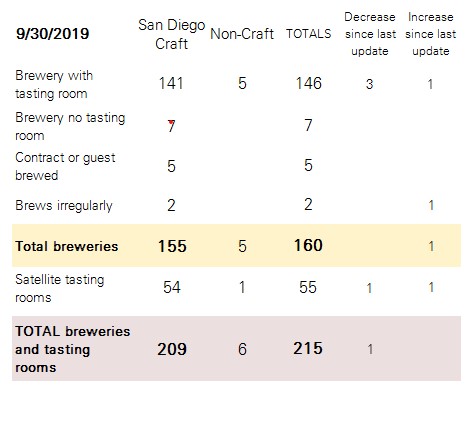 For context, a net -1 change is a decrease of 0.46% of locations. We are in the era when closures should inspire a shrug instead of worry about the state of the industry.

Mike Hess’s original brewery in Miramar has been functioning as just a tasting room for a couple of years—various plans to install a new brewing system there fell through. They sold one system that had been delivered there but not installed to AleSmith, where it is now the small batch system. But in a move negotiated with ABC to keep the Type 23 (brewery) license at Miramar, Hess will now brew regularly again there. The location therefore moves from the tasting room category (-1) to the brewery with tasting room category (+1).

After their sixth anniversary party on September 28, 2Kids Brewing closed down (-1). Their landlord was unwilling to negotiate a reasonable lease renewal and so they decided they couldn’t afford to keep operating.

Mason Ale Works Oceanside closed in early September (-1). The company will open another Urge Common House in Temecula. The whiskey bank concept wasn’t working in Oceanside, and the brewing system there was redundant after an increase of brewing capacity at the main San Marcos brewery. (The ownership group, 3 Local Brothers, also closed Brothers Provisions in Rancho Bernardo and The Barrel Room in Carmel Valley, though the neighboring tasting room for Mason Aleworks will remain open.) Restaurants close all the time, so I read this not as a failing business but as a robust one that is refocusing on opportunities that are going to take them farther.

West Coaster reported in August that Embarcadero Brewing had closed their tasting room to focus on brewing for distribution. Now they report that Embarcadero is seeking a new location because a new building owner has jacked up the rent. The news item is a bit obscure but seems to suggest that the brewing system has already been removed from the building. Does this mean they are on hiatus? It isn’t clear. Their social media channels have had no posts since Sept. 5, but there is nothing there about closing, not even closing the tasting room—in fact their website still posts tasting room opening hours. Until I hear more info, I’ll move Embarcadero to the “brews irregularly” category.

West Coaster had a nicely detailed piece about a new Lost Abbey tasting room opening in the San Elijo village, an region within San Marcos. If you have never been there, it is a gorgeous area and totally worth the trip. If all goes to plan (but does it ever?), the 12-tap tasting room will open in November. There is also another Lost Abbey tasting room in planning for East Village (a neighborhood of downtown San Diego), though the opening timeline is not clear.

TapRoom Beer Company, owned by the excellent craft beer bar in Pacific Beach, has been taking out full page ads in West Coaster for their new brewery and tasting room “coming soon to North Park” for what seems like a couple of years. Finally, in the September 2019 issue, I noticed that they have added some specificity to “soon”: Look for that location to open in “fall 2019”.

This one was announced in West Coaster in July, but I was traveling and missed it. Hopnonymous Brewing has moved into Council’s old Kearny Mesa facility and will contract-brew house beers for bars and restaurants. A Facebook post on 9/25 confirms they are on track for a fall 2019 opening.

Booze Brothers announced two new venues coming soonish (a scoop for the Beer Night in San Diego podcast). The first is a special event space, rather than a regular tasting room, in downtown Vista. Some events will be open to the public, but that spot will only be open for events. Plus, they are opening a tasting room in Oceanside. Construction on both properties just started, so I’m guessing a spring 2020 opening for both.

“Soon” might be a bit of an overstatement in this case, but West Coaster reports that Fenton will open their fourth brewery igniter concept, this one a two-brewery location in Oceanside. I have mixed feelings about this. On the one hand, I’m glad some additional folks will have a low cost of entry, and Fenton wouldn’t make this move unless they though there was a market opportunity. On the other hand, Fenton has structured the leases at brewery igniters in a way that has made it very difficult for breweries to save enough to move out (the supposed point of these venues): the production capacity maximum is too close to the break even point given overhead costs.

In total, I am now aware of 22 breweries and 19 tasting rooms in planning (up three since last month). By my best guess, four breweries and three tasting rooms will come to fruition in the remaining three months of 2019, with several more in early 2020.

The brewery at the Harrah’s in “Funner, CA” (Valley Center) has been re-branded as Rincon Reservation Road Brewery. I guess they decided “SR 76 Beerworks” wasn’t obscure enough.

I’ve removed Epic Wings N Things Escondido from the “Breweries in Planning” list. There has been no news about this plan for a year, and repeated attempts to get info from them have turned up no responses.