Review number 200! Council Brewing’s second brewery and tasting room has been open in Santee for not quite half a year now. It is a pleasant, relaxed spot to pick up some great #localbeer #craftbeer #sdbeer.

This is my 200th review on BeerMaverick.com! Not bad for 25 months, if my liver does say so itself.

[Note added 12/18/18: Council Brewing closed down on 12/15/18. Neither the Santee nor the Kearny Mesa locations are in existence any more. Many San Diego beer lovers were broken-hearted to see such a good brewery close shop.]

Council purchased this Santee location earlier in 2018 after Finest Made Ales (which I liked a lot and was sad to see disappear) put itself up for sale. Besides the additional production capacity they wanted for their continued growth, the location provides a second tasting room for this successful and well-regarded family-run brewery. They do a wide variety of beers very well, but they are best and most distinctively known for the sour beers they age at their Magic Factory, a storage space near their original Kearny Mesa brewery. According to their website, the Santee location only makes “clean,” not aged beers.

The tasting room in Santee hasn’t changed a great deal since the change of ownership. The color scheme is slightly different (browns instead of greys, if my memory is right) and the butcher’s display cases are gone (they were relics of Finest Made Ale’s past as Butcher’s Brewing, a name derived from the fact that it was originally going to be a food-beer concept). What hasn’t changed is the short bar with six seats—a bit strangely, it faces the end wall instead of the row of taps as is more common. You can order from the bar or at the cash register and then choose your seat. There are about a dozen four-top tables arrayed in two spaces, and a longer wooden table that seats six or eight, so it feels like there is plenty of room. You can see the brewing system through a glass door. There are a couple of TVs for sports; thankfully they don’t dominate the space. While there is no real food, you can order some cheese and cured meats with Ritz crackers. It is a pleasant though not fancy room; it feels a little bit more like a cafeteria than a bar, which is admittedly a step or two up from a lot of brewery tasting rooms. 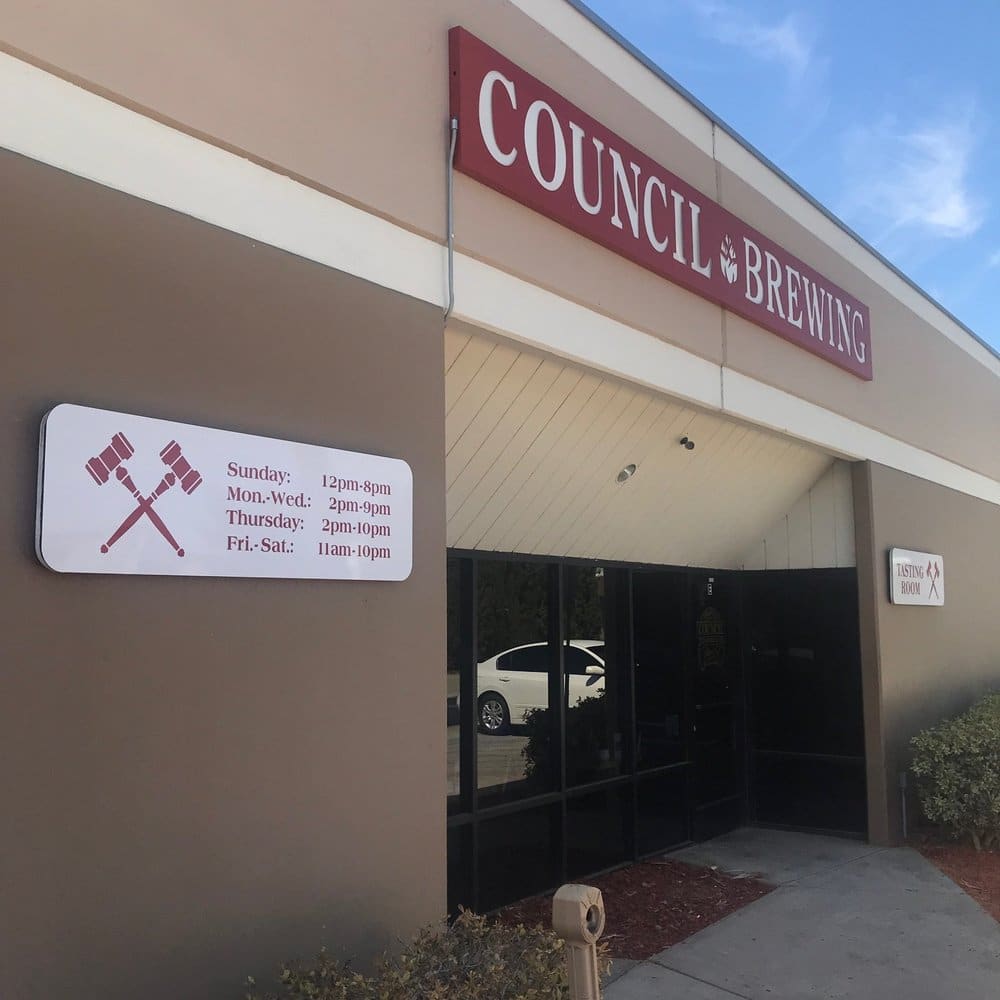 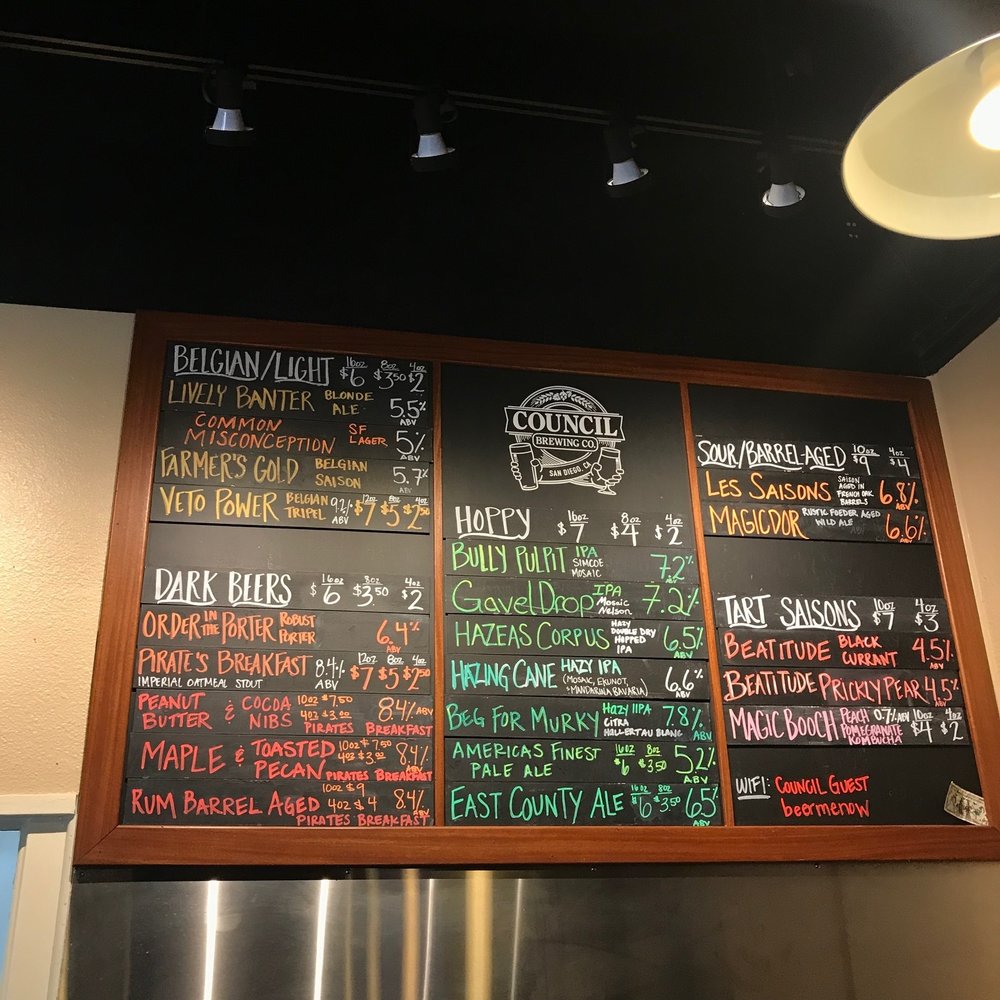 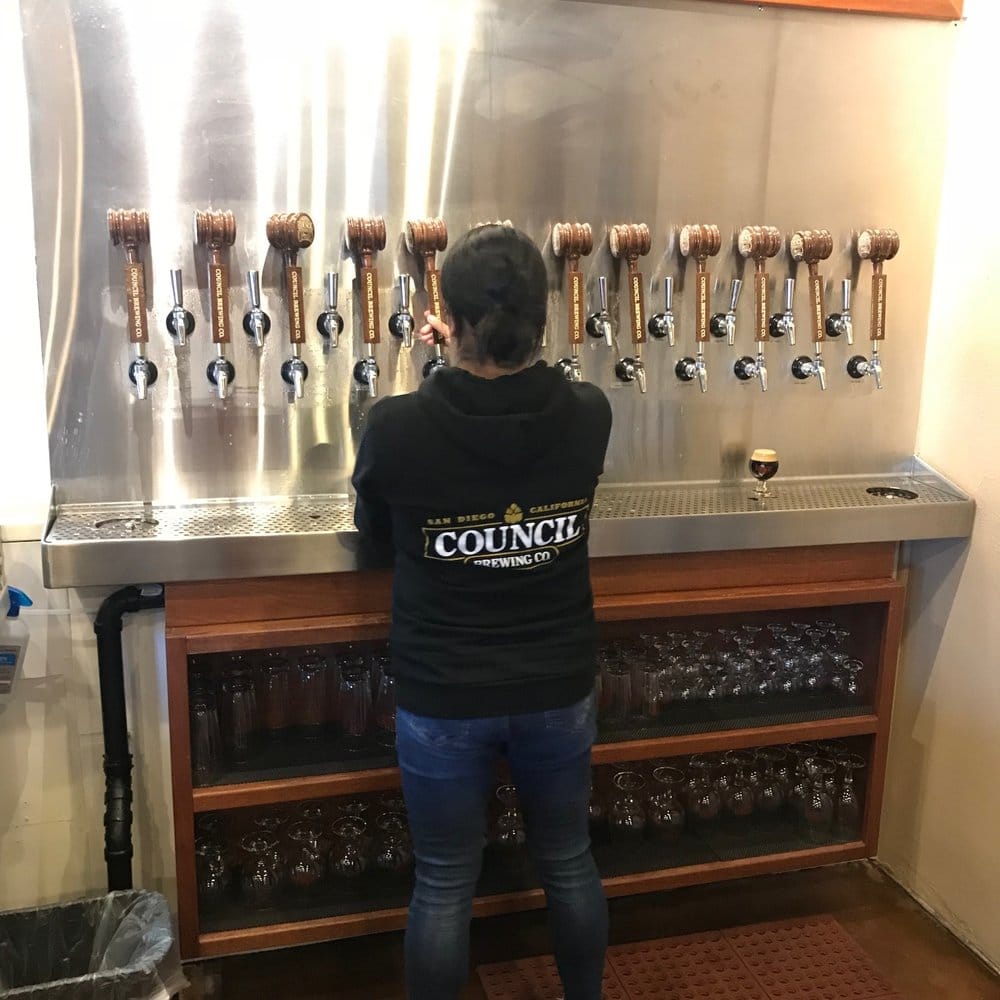 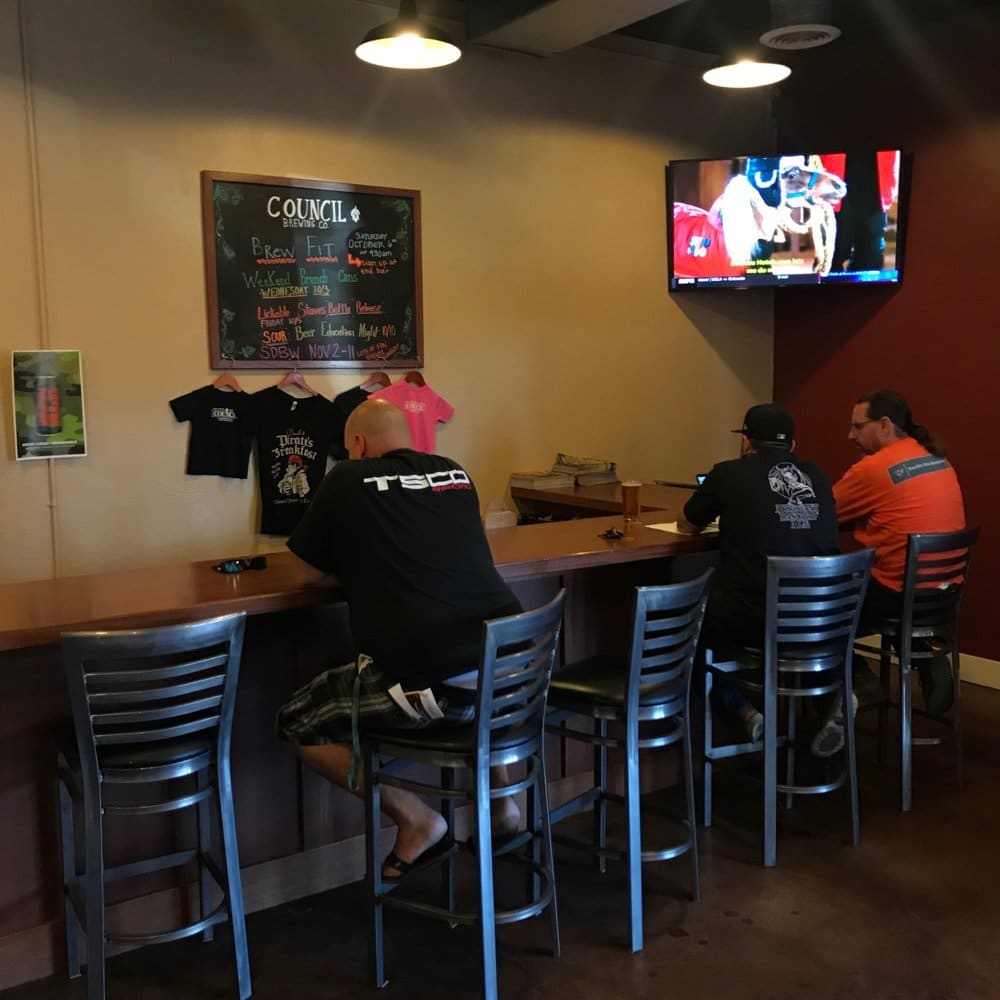 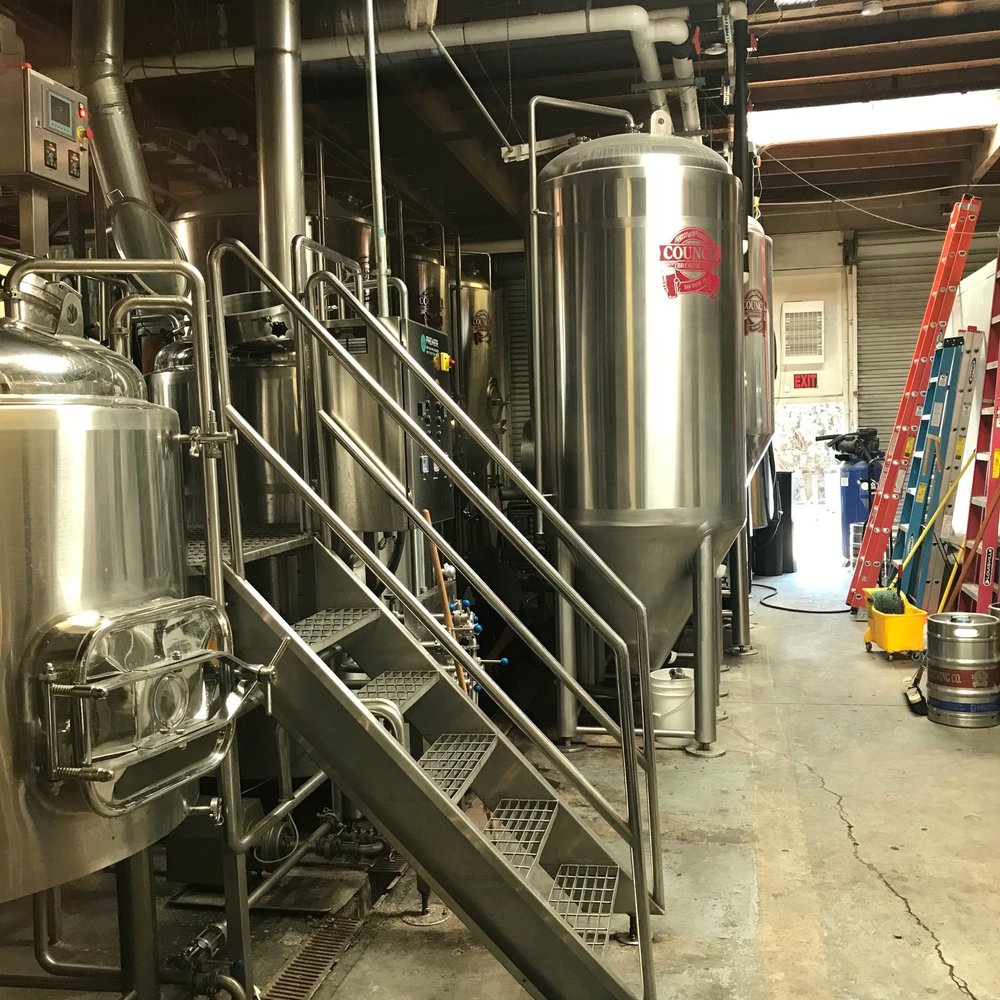 They were pouring 23 beers on my visit. That is a large number, but it is probably only half as many as you’ll find at the original Kearney Mesa brewery. There was a large section of IPAs (including hazies) and hoppy pale ales, and surprisingly only five sour/aged beers (just three from their famous Beatitude fruited saison series). I was extremely happy to see that the special selection of porters and stouts they had put on for last week’s Talk Like a Pirate Day was still available. Those five beers made up my flight. All of them were the same very dark brown, almost black color, with a nice layer of tan head that persisted to the end.

Order in the Porter (Robust Porter, 6.4% ABV) Flavorful, light to medium body (less body than I expected in a robust porter), a clean finish with a slight lingering roasty bitterness. I get an impression of coconut though that isn’t an ingredient so far as I am aware. This beer reminds me of Second Chance Tabula Rasa, though this is a little less robust tasting. I could certainly drink several of these.  3.75/5

Pirate’s Breakfast (Imperial Coffee Stout, 8.4% ABV). As I said the first time I tried this almost two years ago, if this is what pirates have for breakfast, I want to be a pirate. Although I rated it 0.25 lower this time, it is still delicious. Smooth with a light bite from the higher ABV, there’s a background sweetness and a fig note. The deep roast malts are delicious. I really like that the coffee flavor does not overpower in this beer; it does lend a slight sourness but that does not detract from the overall impression. In fact, it is very well balanced all around for an imperial coffee stout. It has a comparatively light body for a stout, and it is not as creamy as many oatmeal stouts. That could be batch-to-batch variability, I’m not sure.  4/5

Pirate’s Breakfast with Maple Syrup and Toasted Pecan (Imperial Coffee Stout, 8.4% ABV). I thought I would like this more than I did. Hard to say why, there’s nothing wrong with it. The sweetness doesn’t taste maple though, and the pecan flavor doesn’t come through–I get just a kind of generic nuttiness, and more in mouthfeel than flavor. Maybe this is one of those beers whose flavor changes quickly as it sits in the keg, because some other folks on Untappd rated it a lot higher (Untappd average as of this writing, 4.11/5)   3.5/5

Pirate’s Breakfast aged in Cutwater Spirits Rum Barrels (RBA Imperial Coffee Stout, 8.4% ABV). Local craft rum and local craft beer! It is a good concept but I prefer the base version. This is boozier but with plenty of flavor. Sweet, hot, raisin, maybe a little oxidized. I am guessing that the ABV listed on the menu for this one is wrong–the beer certainly picked up a lot of rum/alcohol flavor, so I bet the ABV is higher than the base beer.  3.5/5

When I visited Council Santee early on a Friday afternoon, there were already about ten people hanging out. Regulars told me it really fills up after work on a Friday. I can see how this would make a fun end-of-week hangout. The service was excellent and so is the beer, and together with a relaxed, comfortable tasting room, that’s a winning recipe.