How Many Breweries in San Diego? September 2018 Update 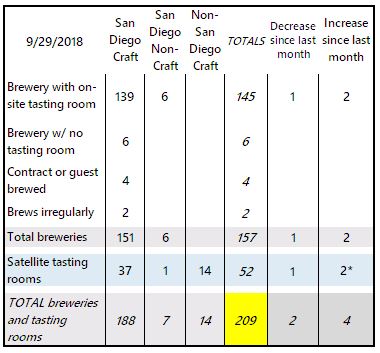 Monkey Paw Brewing was closed down suddenly at the end of August. Coronado Brewing bought Monkey Paw in summer 2017, but it seems conflict with the former owner (who still owns South Park Brewing and Hamilton’s Pub) in addition to other business pressures caused Coronado to rethink their decision and they put Monkey Paw up for sale earlier this year. I’m sure there is plenty we don’t know, but the upshot is that this iconic SD beer brand is no more. Officially, Coronado made the move to focus on their core brand, plus their SouthNorte offshoot.

The ChuckAlek Biergarten tasting room in North Park closed at the beginning of September. Their brewery in Ramona closed in July, so this was inevitable. It is a lovely outdoor venue, so hopefully someone else can make something of it.

Not an opening but an addition to the list: For some reason I hadn’t included Tiger!Tiger! as a tasting room for Automatic Brewing.

Creative Creature Brewing is set to soft open in El Cajon on the first Friday of October 2018.

Helia Brewing (originally planned as White Fence Brewing) has announced they will open in Vista in the first week of October. I’m concerned about brand confusion with the already-established Helix Brewing in La Mesa.

Speaking of Helix Brewing, they just had a second set of tanks delivered for their expansion into the space next door. Look for big things to come soon, including a barrel-aged sour beer program.

Mike Hess published a video on Instagram revealing their in-progress Imperial Beach tasting room for the first time. It is going to be cool! Beer, tacos and a patio just steps from the beach. Look for it to open near the end of this year.

Double Peak Brewing is planning to open in San Marcos. Though they are new to the list, they are well along with construction and their brewing system has been delivered. Waiting to hear a planned opening date but my guess is early 2019.