Stone Brewing at the Airport

If you are flying into or out of Terminal 2 at San Diego International Airport and you want a craft beer, Stone has you covered! #sdbeer #craftbeer #sandiegocraftbeer #localbeer

This is a location I’ve been meaning to get to for quite a while, but I just haven’t had a flight out of Terminal 2 until last weekend. And what a reason for a visit to Terminal 2 it was: My prize trip to The Great American Beer Festival in Denver for winning the 2018 BrewDog Beer Blogger Geek award! My girlfriend, Sarah, wasn’t able to come this time, so my good buddy Rob (Instagram’s @sdbeertour) joined me. I’ll be writing about the GABF experience soon, including an amazing beer pairing lunch for all the BrewDog winners at Briar Common. (Sarah is definitely coming with me next summer for the trip to Brussels I got for winning the America’s Biggest Beer Geek award in the same BrewDog competition!)

After you clear security (or before you get to baggage claim on your inbound flight!), you’ll find the Stone location in the central lobby area of Terminal 2 of the San Diego International Airport, where there are several other shops and services. They are open 6am to 10pm, so if you need a pre-/post-flight drink, this is definitely the place to get it. They offer a full bar and good food in addition to having 24 taps, including guest taps from other local craft breweries. The selection isn’t as extensive or as special as you would find at the nearby Stone World Bistro & Gardens in Liberty Station (or even at one of the Stone locations downtown, on Kettner or next to Petco Park). But the solid standards you know and love are here, as well as a few of the newer offerings aimed at larger markets. 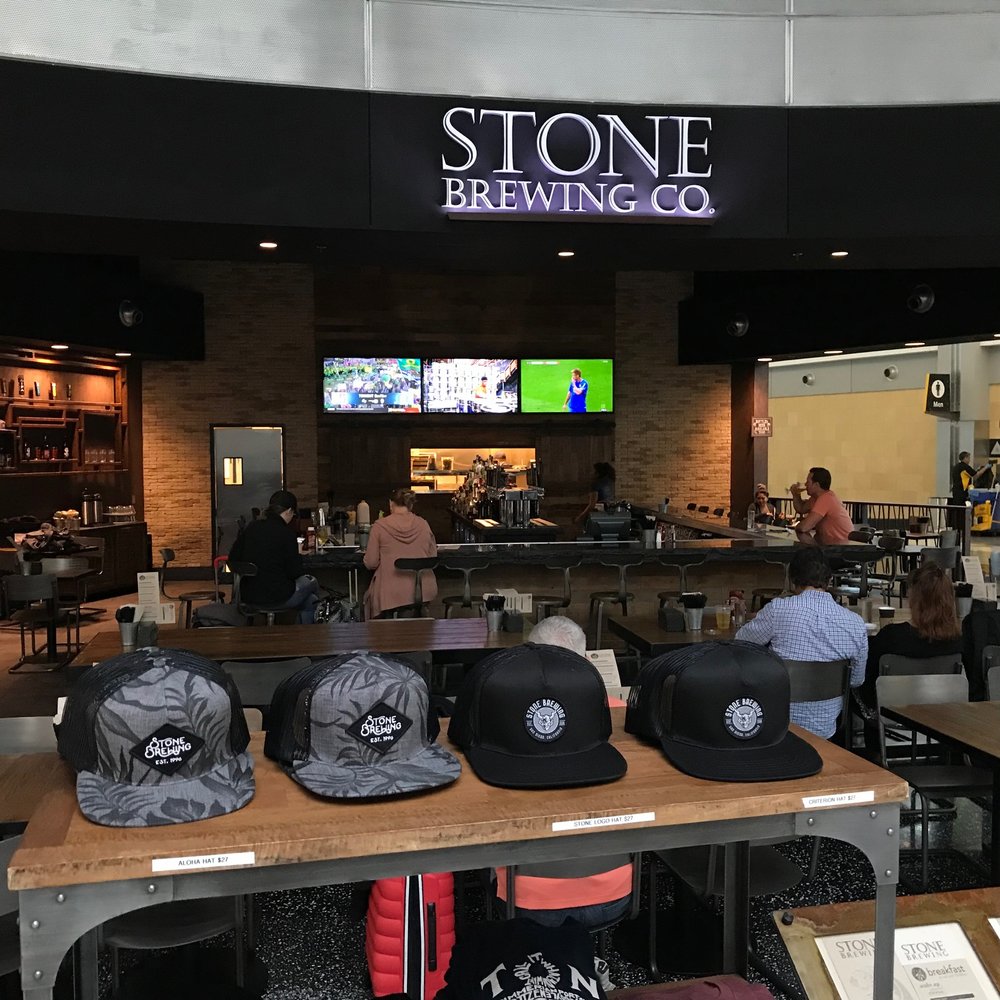 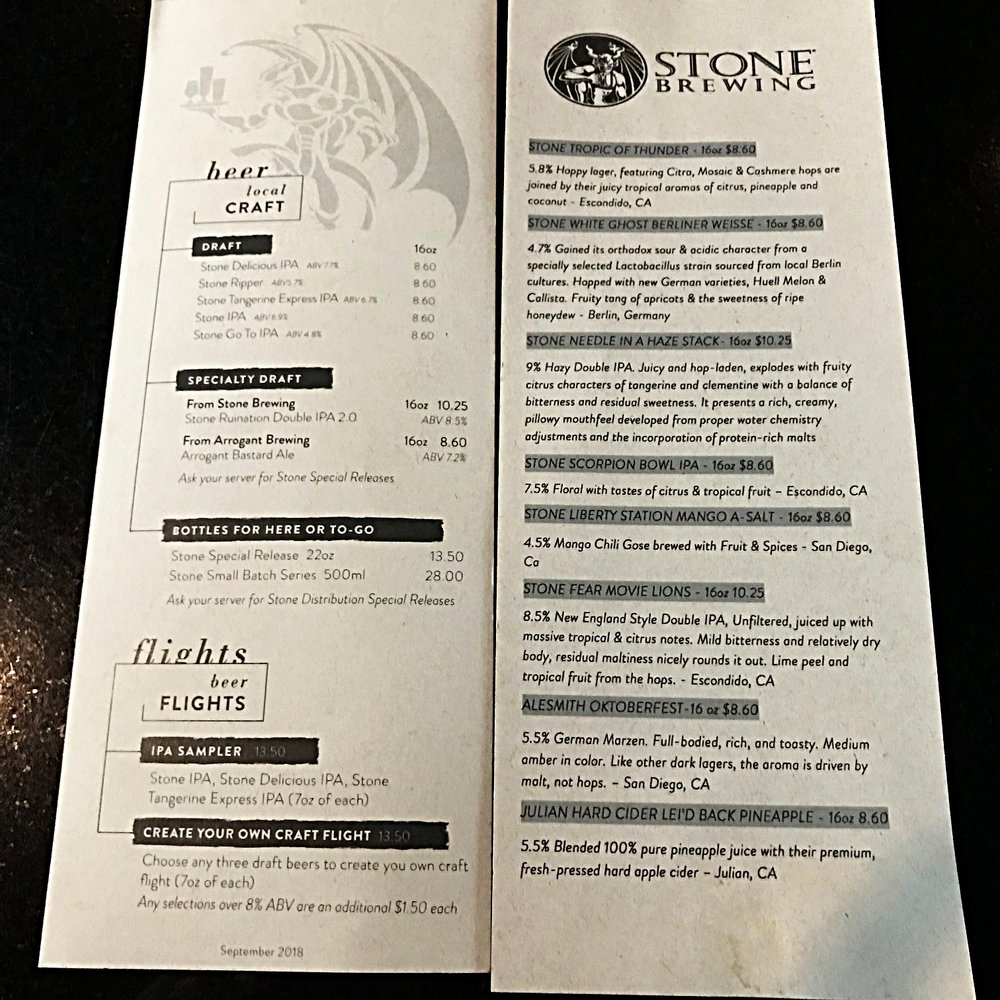 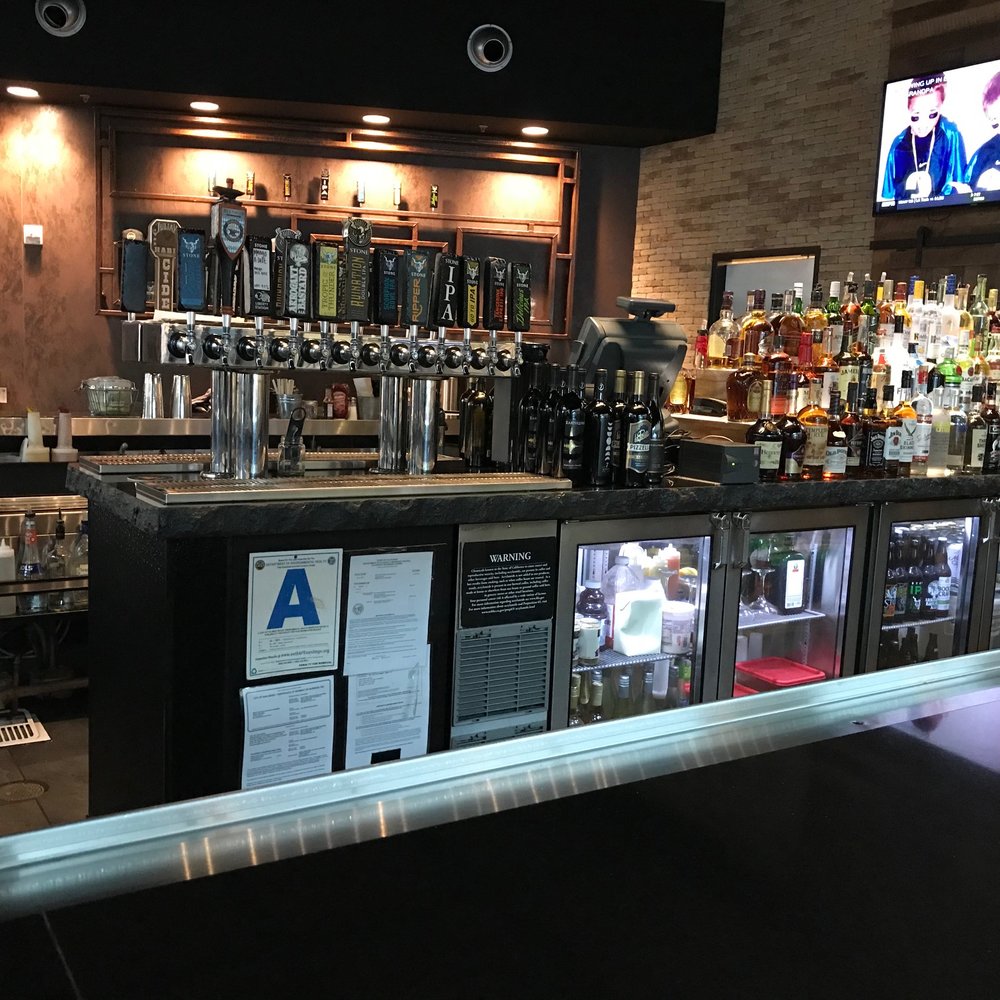 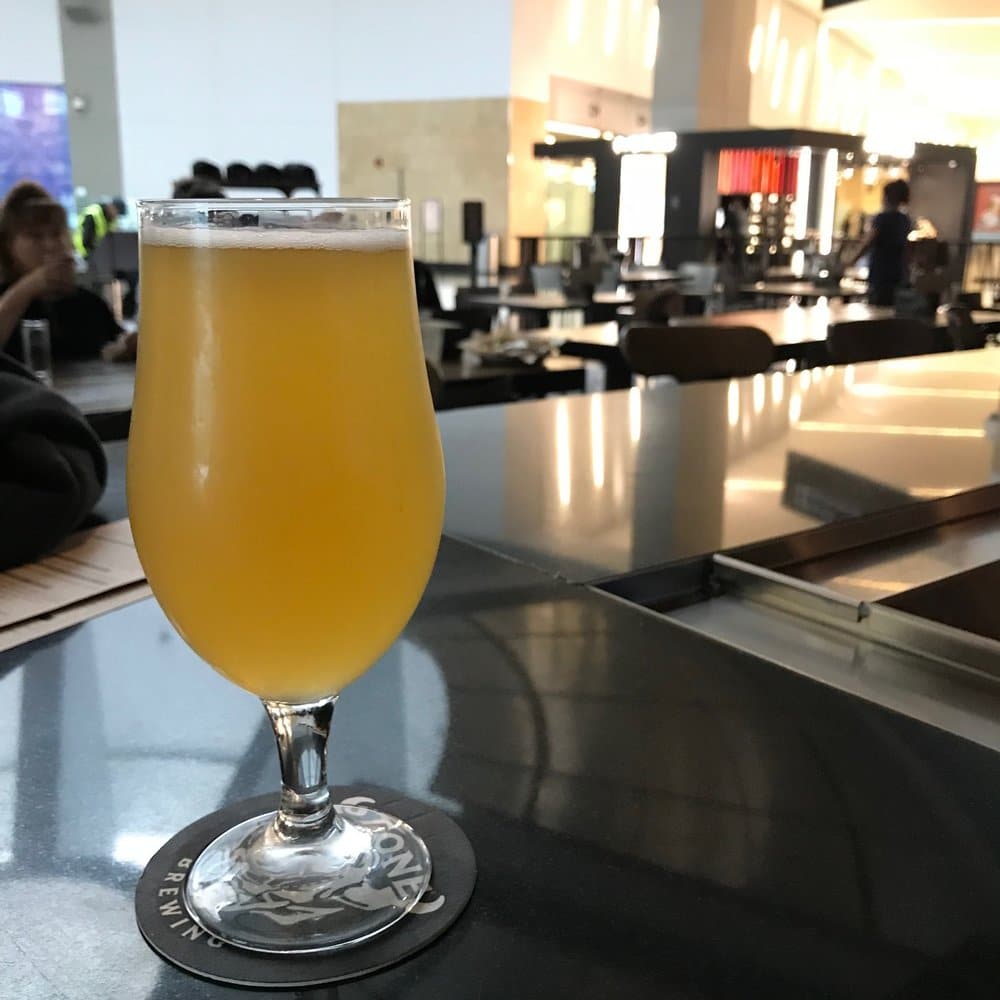 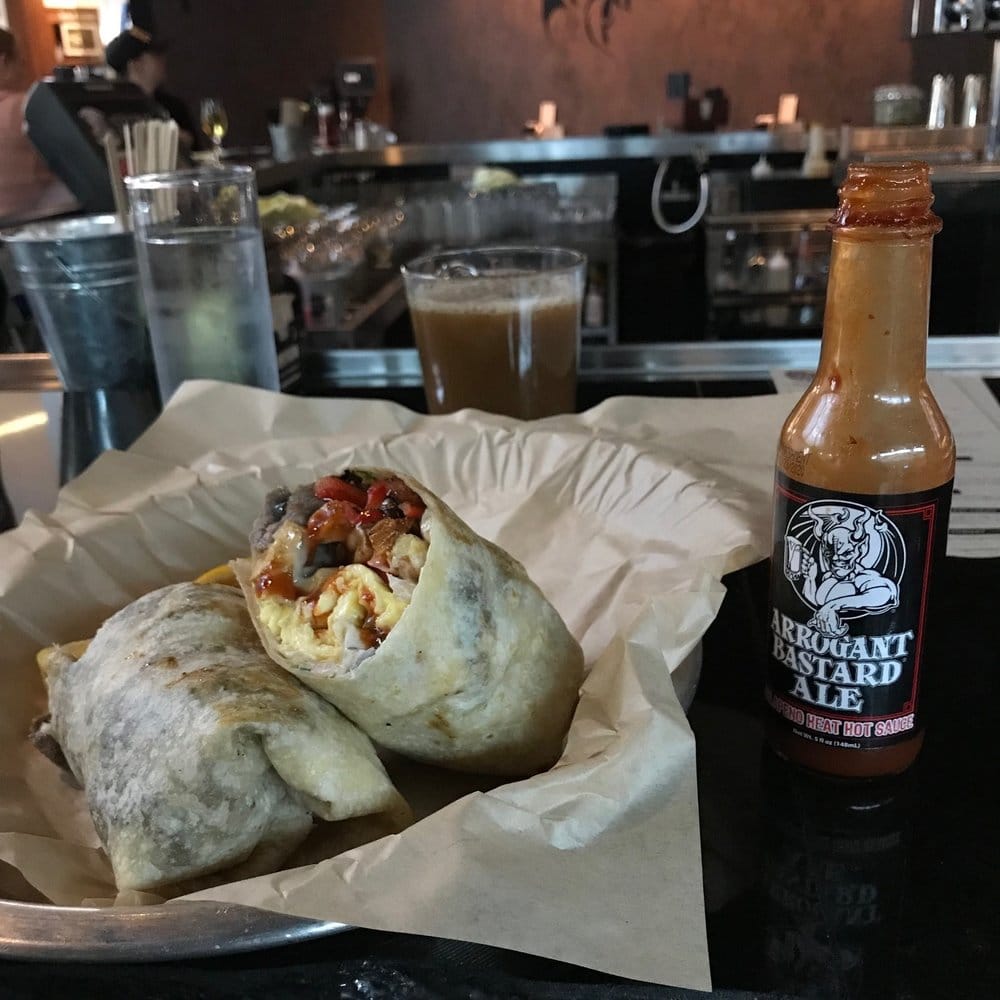 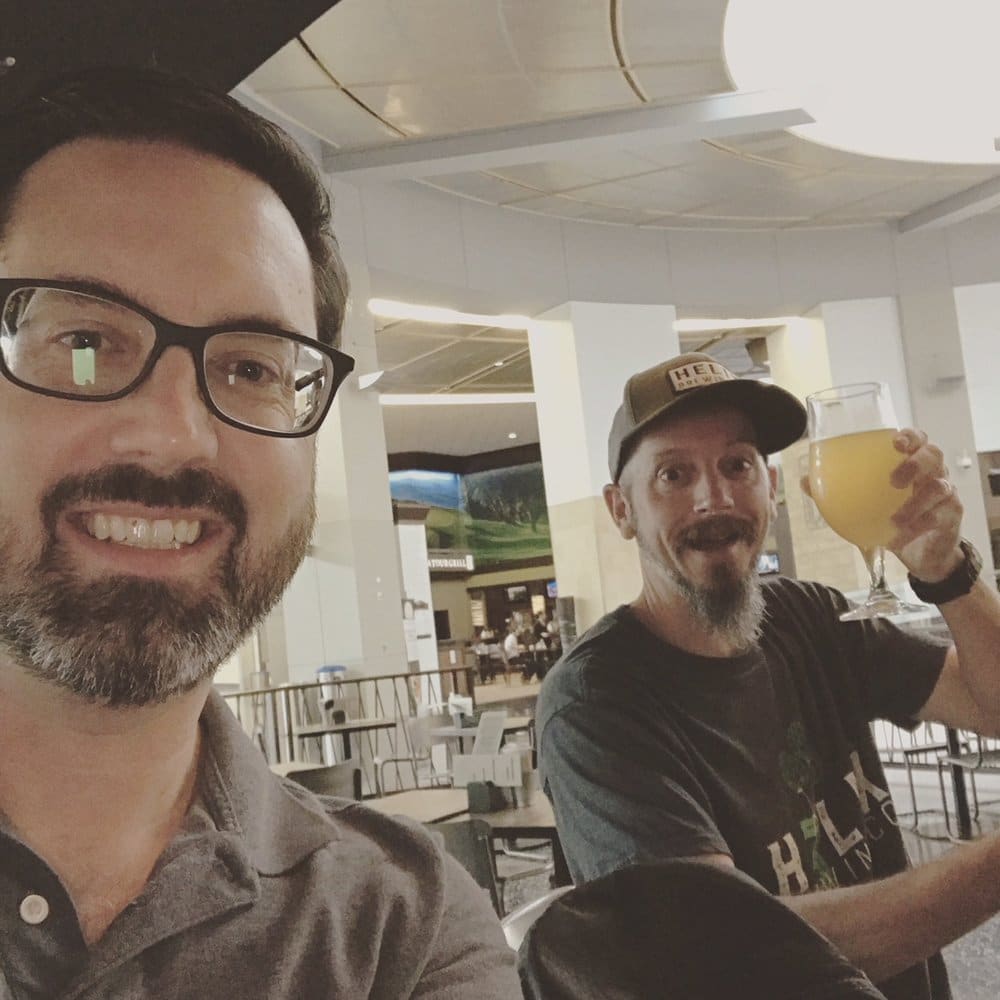 The décor is relaxed and sophisticated, there are lots of seats at the bar and a whole slew of small tables. I can imagine this place is packed during most of the day. We were there at 7:00am, though, and there were only a few people. Both of the breakfasts we ordered we very good (I had a steak burrito, Rob had a breakfast skillet) and the food came out quickly. Service was good, though it was hard to track down the bartender to pay the bill because someone went on break and that meant the bartender was out on the floor taking orders and delivering food. That’s just ordinary stuff that happens in a restaurant, so it isn’t a complaint.

If you are on a beer tour of San Diego, is this a place you must include? I would say no. While it is perfectly nice, there is nothing special or unusual about it. If you happen to be in the airport for a trip in or out of San Diego, should you stop here? Yes, definitely. If you just want to include one Stone location on your beer tour, I recommend the very impressive World Bistro & Gardens in Escondido, or the Stone Company Store in Oceanside.