[Note added 1/4/18: At the end of December 2017, Kuracali announced by social media post that it was closing the location reviewed below. There is an implication in the message they sent that they will reopen under a new concept in a new location, but plans are vague.]

Through a weird set of liquor laws, this tiny place has two bars. Actually, one bar split down the middle. Go in one side and you can have craft beer made on site. Go in the other side and you can have sake brewed right here, too. If you want to sample both, you have to leave your first seat and go through two doors and around to the other side of the bar. The same bartender serves both, so it is a quirky little thing.

“Quirky little thing” might be the most apt description of this whole place, in fact. The set up is one of the smallest I’ve seen, with just three or four seats on each side of the bar, and only a few tap handles. There is minimal design (as opposed to minimalist design)–a bit strange in a place which aims to nod to Japanese traditions, but this is clearly not a large-budget operation. There is, fortunately, an umbrella that blocks the late afternoon sun that would otherwise stream into this storage-locker like space. The umbrella creates mood and some pretty good photo ops, if you are into beertography. Or saketography, though I don’t think that hashtag has taken off yet. 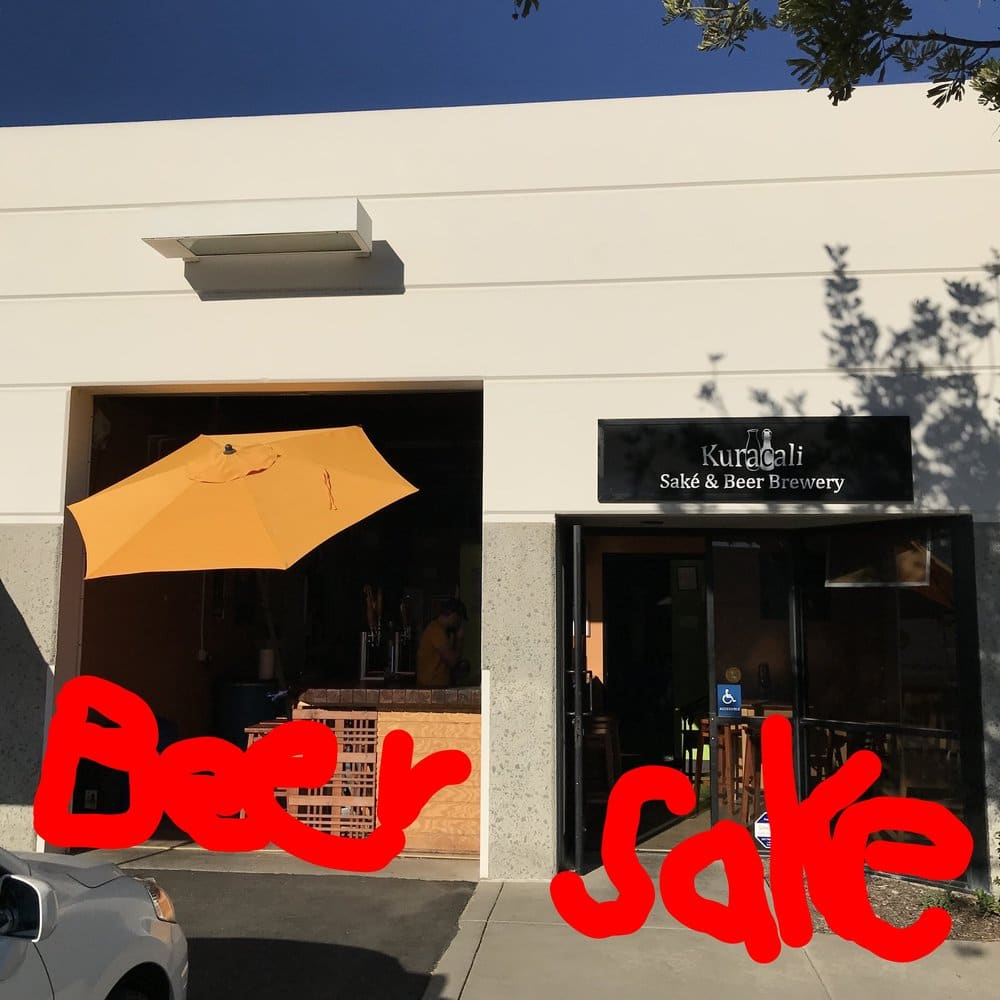 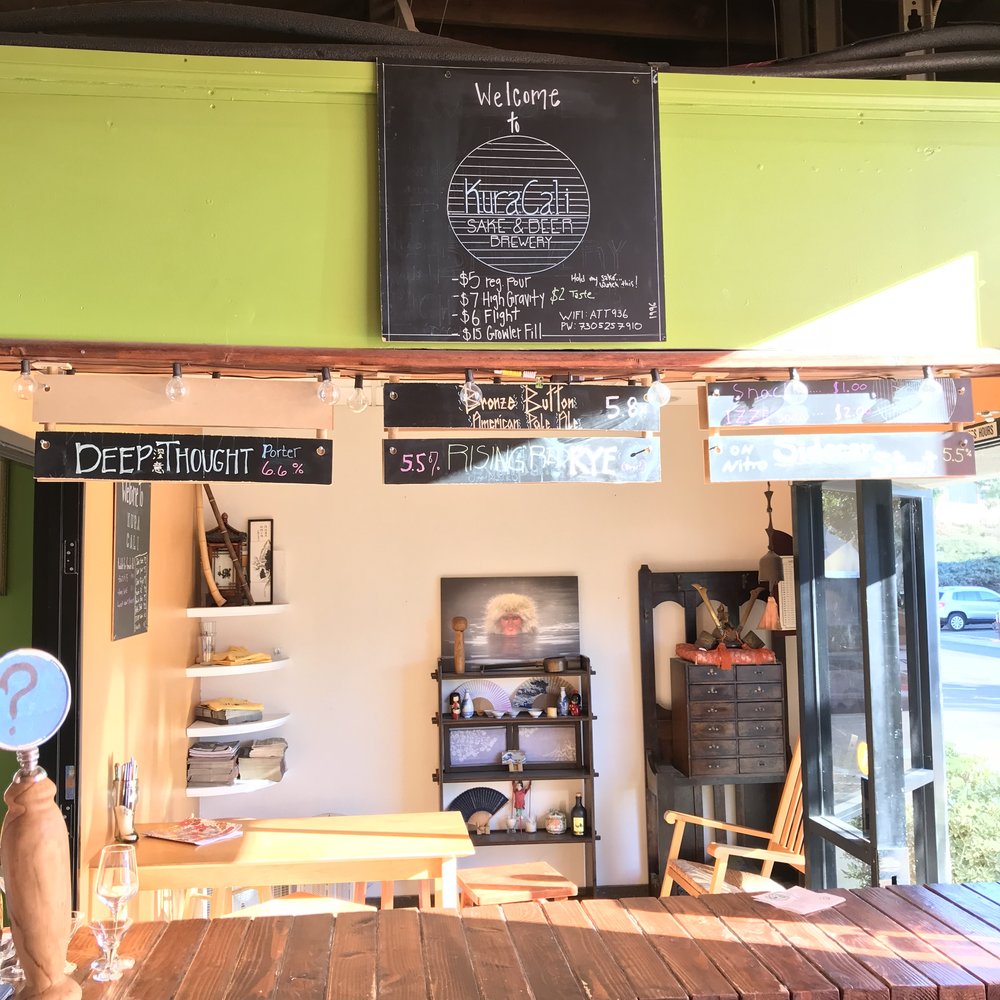 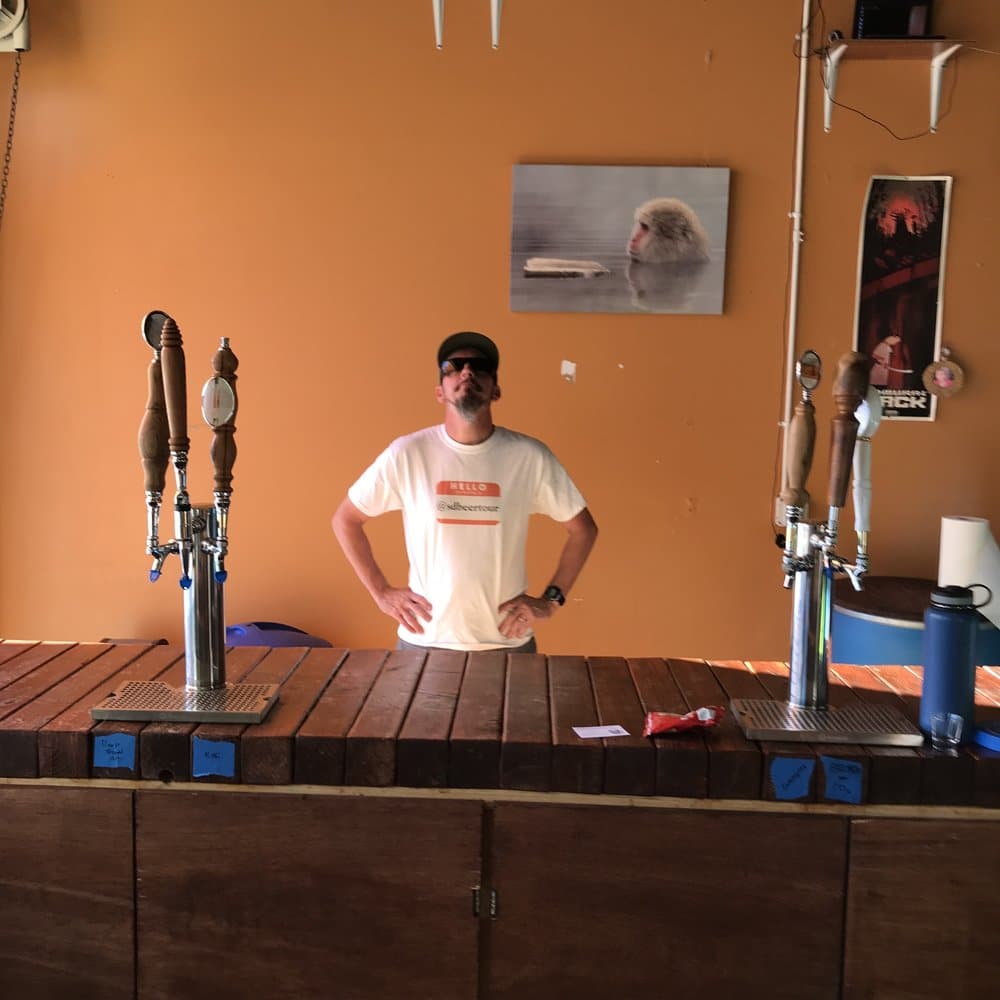 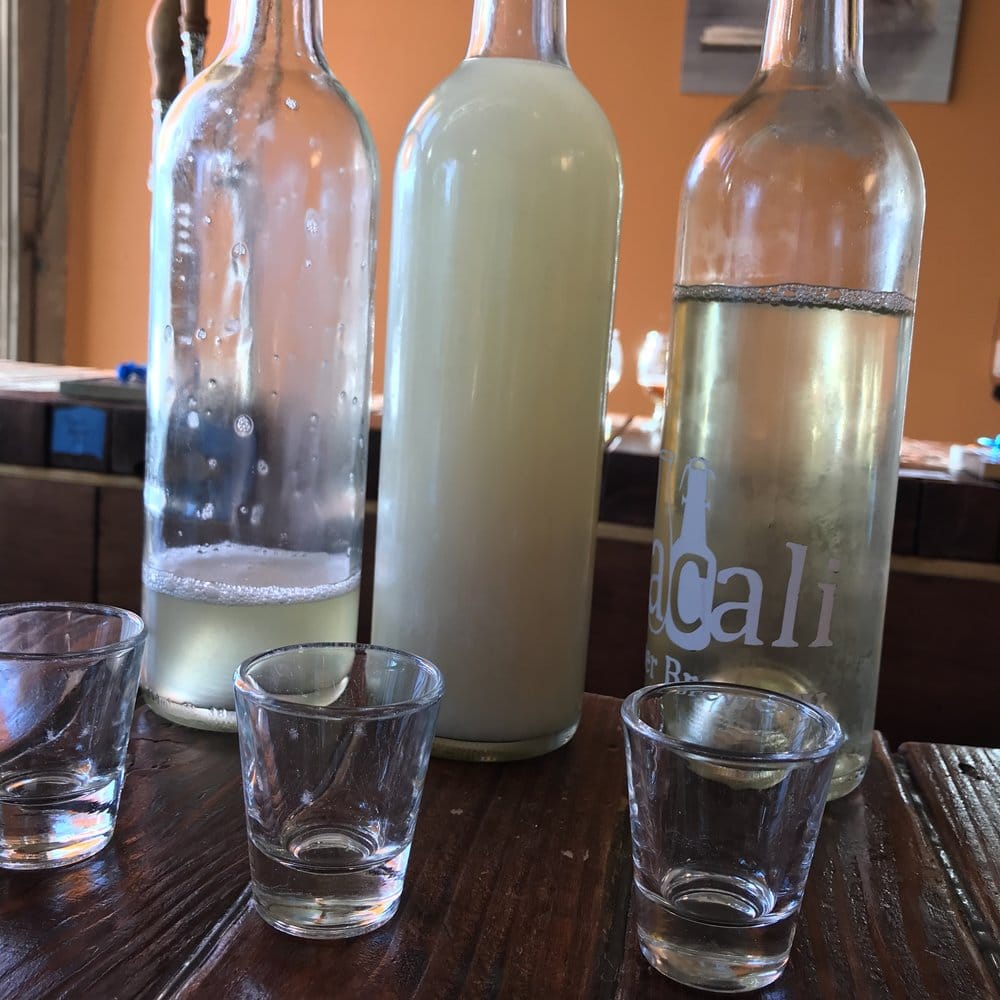 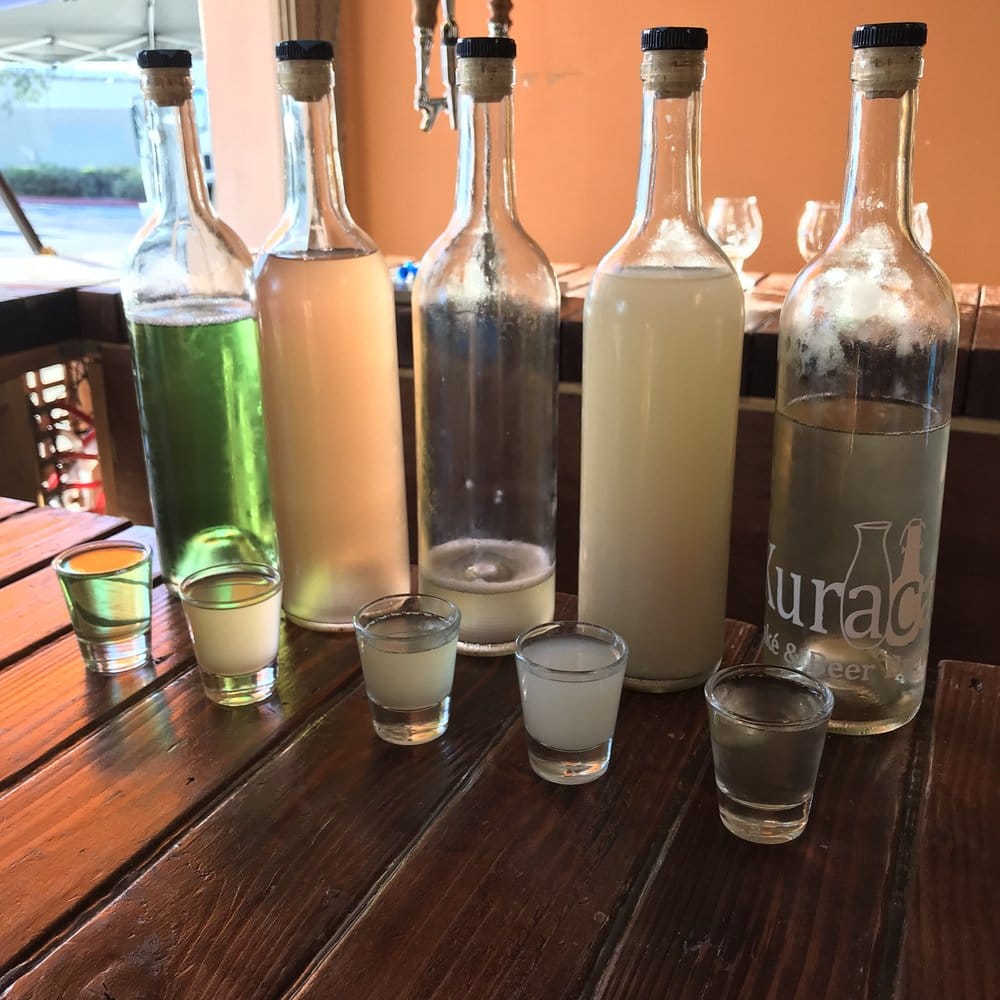 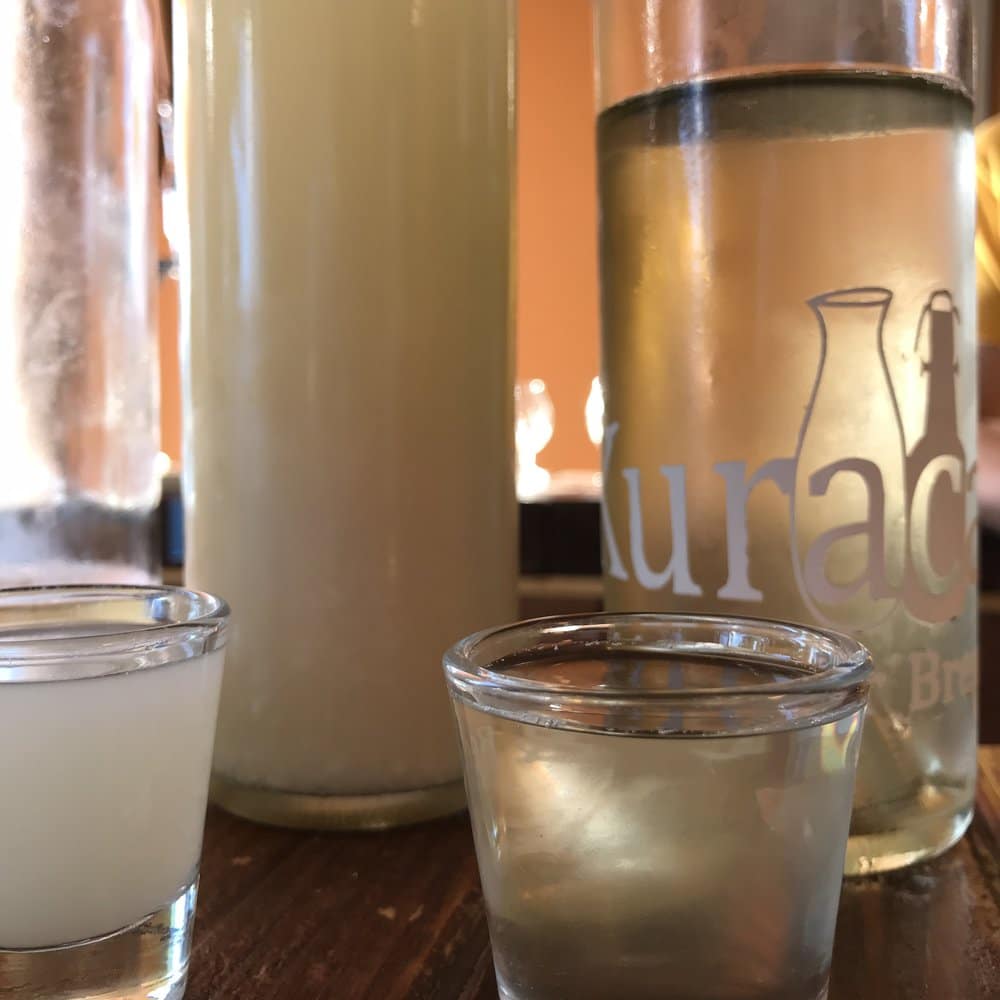 As we shared first a flight of beer and then a flight of sake (thanks again, IG’s @sdbeertour!), our thoughts were along the same lines. This isn’t so much a brewery as someone’s expensive hobby. That was really driven home to me when the bartender told us that they have no regulars (they used to have one, apparently) and the folks who work in the neighboring businesses don’t come in. They are open only 13 hours per week (Friday afternoons and  Saturdays)–I just don’t see how they can possibly be paying the rent, let alone wages.

Our bartender is also the brewer, having taken over most of those duties from the owner. He is quite proud of his sake. I haven’t had sake since college (and I don’t remember much from that night except that I didn’t like it very much), so I’m not a competent judge of its quality. We did enjoy several of the sakes we sampled, though, and it was fun to talk with the brewer about how he makes it. They have a remarkable variety of sakes, including flavored and traditional brews.

Kuracali plans a renovation soon that will increase their sake brewing capacity at the expense of beer brewing capacity. From the point of view of focusing on what you are good at, that makes sense to me. Of the four beers we tried (that was everything that was available on the day of our visit), the highest rating I gave was 3/5. Drinkable, but I wouldn’t seek it out.  There’s no way they can compete on beer in beer-dense North County, but sake is enough of a niche that they can stand out for that.