It feels like déjà vu all over again…I’ve been here before, when it was SpecHops! That company went out of business at the end of 2017 (see my posts on Craft Beer Closures). The location and impressive brewing system were purchased by Beach Grease Beer Co. in spring 2018. Beach Grease was originally aiming to be closer to the coast, as befitting their surfing-and-old-cars theme, but this deal was too good to pass up.

Whereas SpecHops had a military theme, Beach Grease has redecorated with surf boards and several modded antique cars. The greys and greens of SpecHops have been mostly replaced by black with white and blue accents, leaving a more modern and cleaner feel. All of that is just in the surfaces though; I didn’t see any big structural renovations, except the addition of a wall devoted to merchandise. 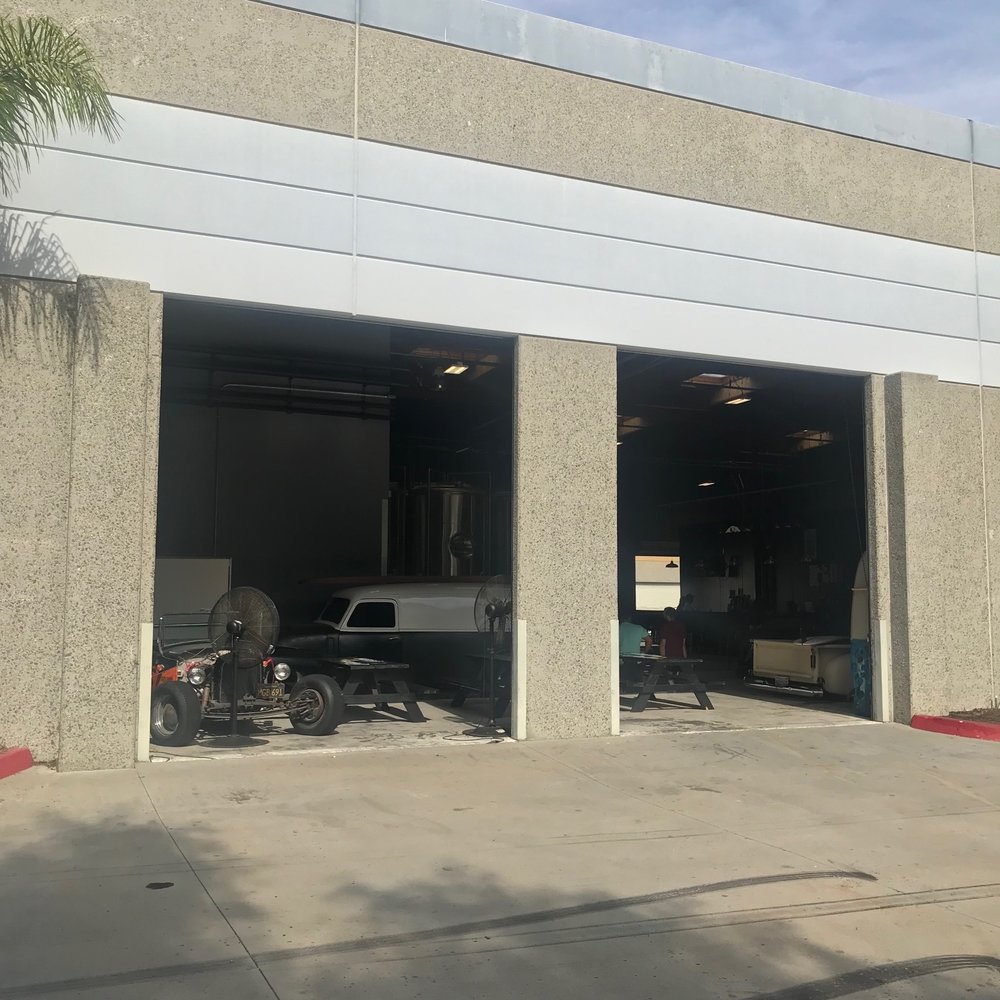 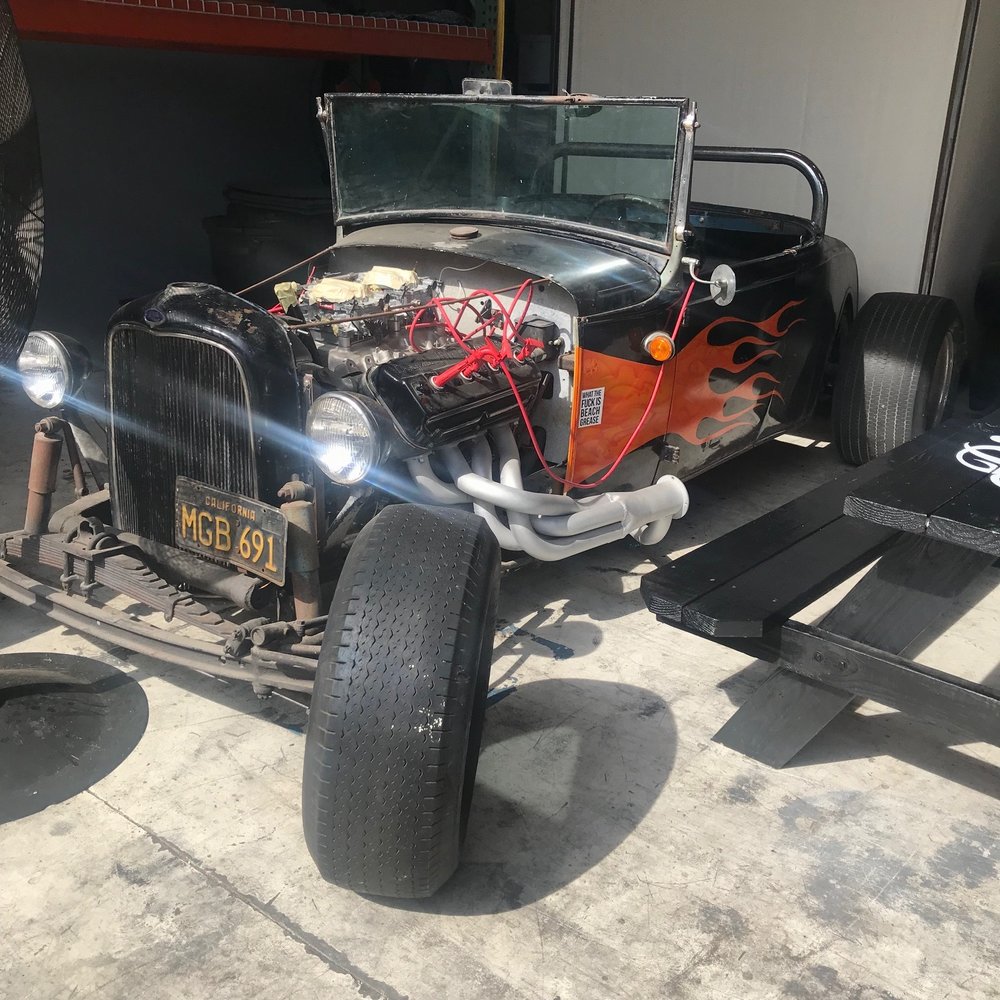 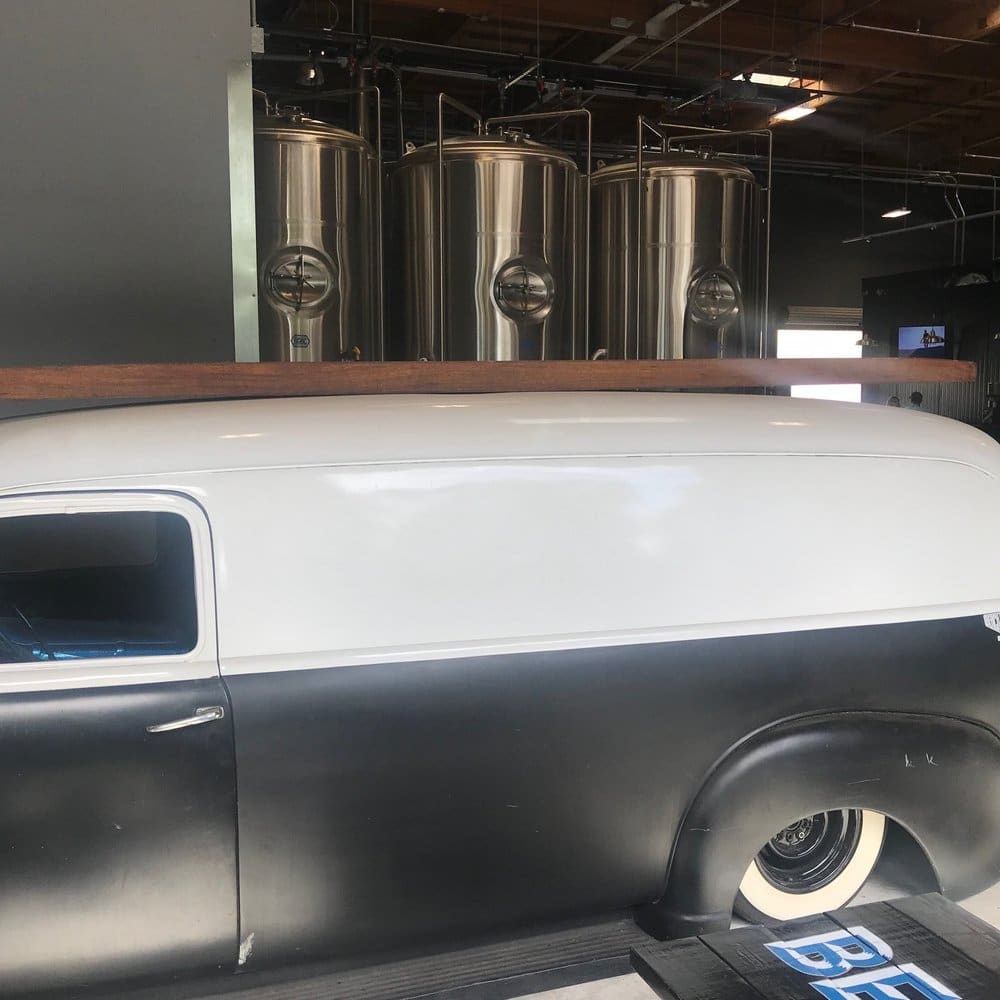 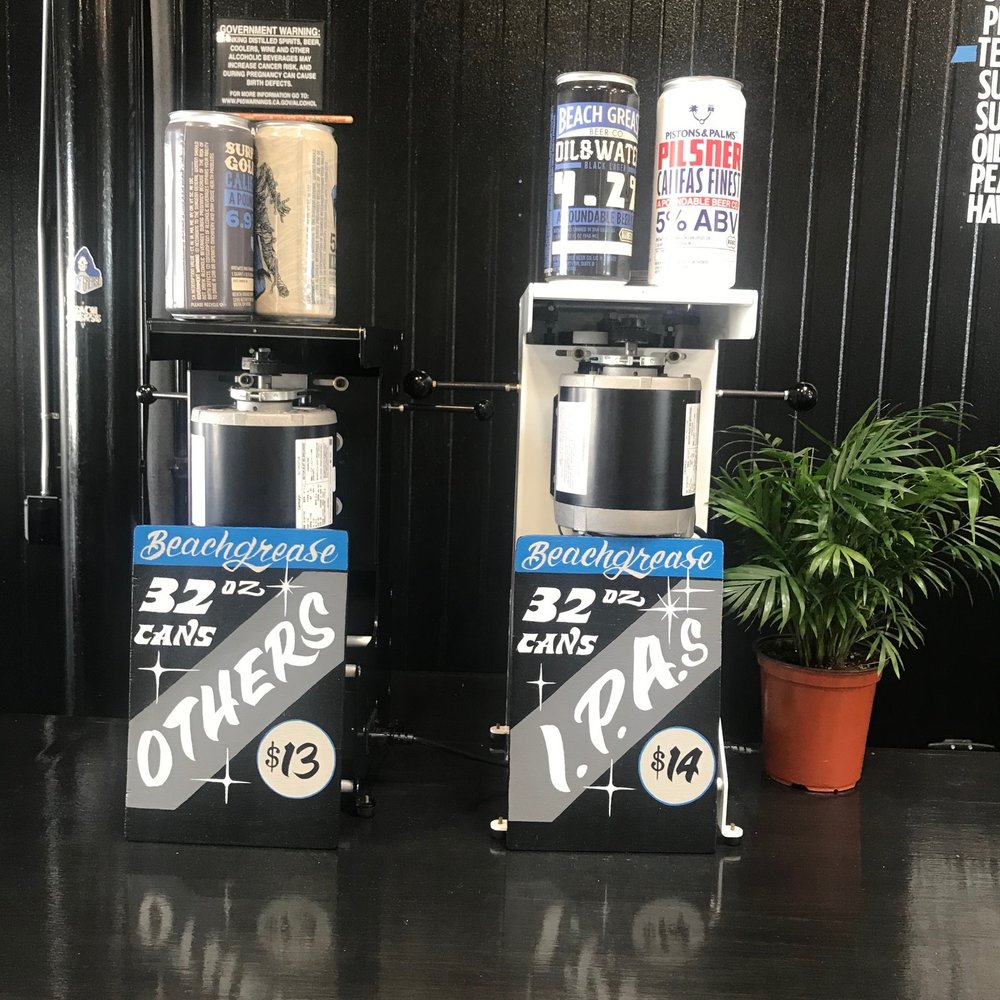 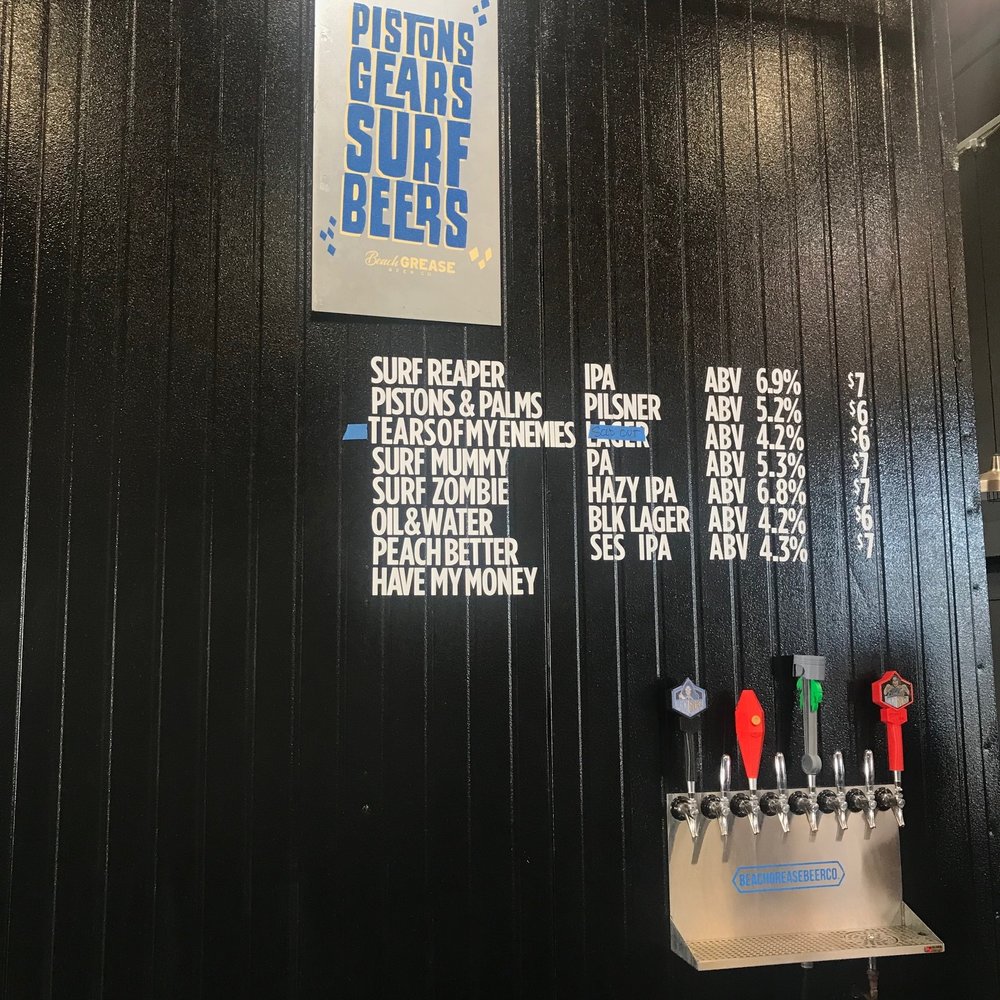 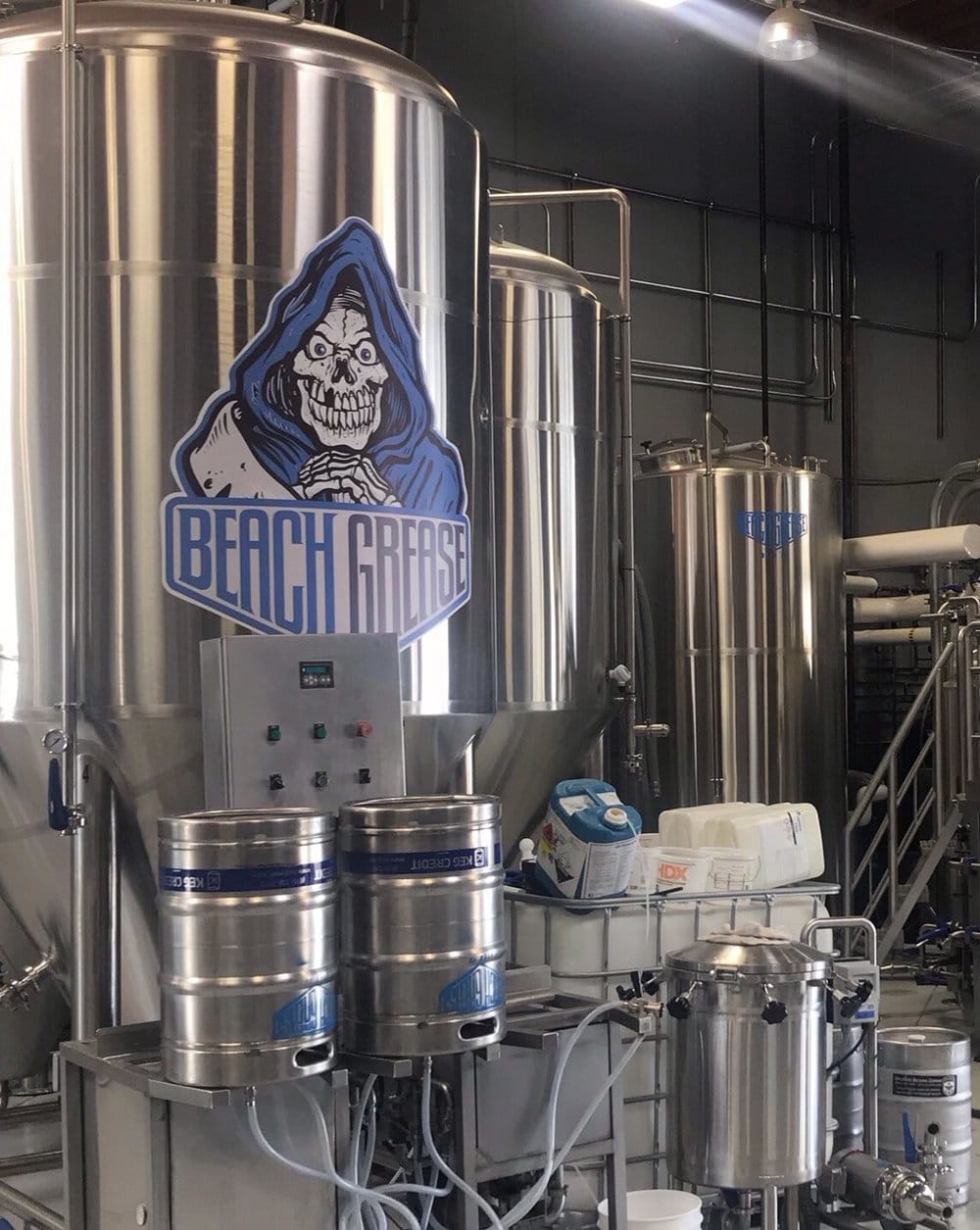 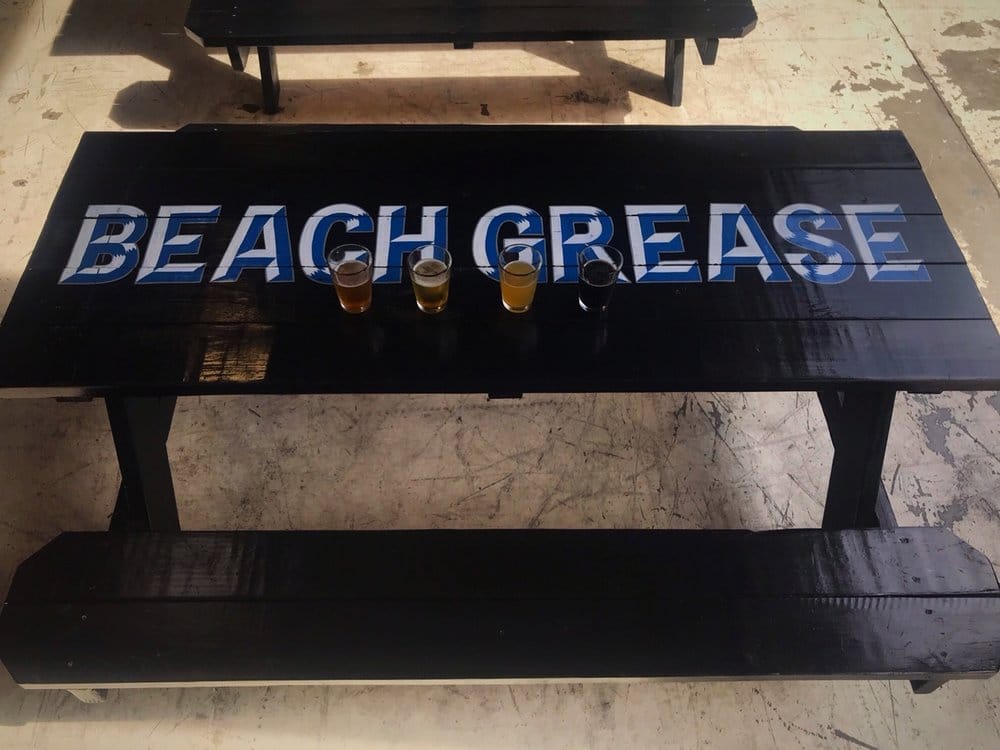 The silver tanks still gleam in the center of the operation, now adorned with a death’s head surfer they call the Surf Reaper. Black-painted picnic tables near the open roll-up doors, stools along the drink rail surrounding the tanks, and the long bar make up the three seating areas. Industrial-sized fans helps with temperature control. In most respects, it is a typical tasting room in an industrial setting. Now that I’ve been to 201 breweries and tasting rooms in San Diego (not to mention dozens elsewhere), I’m getting a little tired of that particular aesthetic, but I guess that isn’t Beach Grease’s fault.

I had heard that Beach Grease had only a few beers on their menu, but there were more than I was expecting. They had eight beers listed on; one (a lager) was out and one was not yet on. Of the six pouring, there were three IPAs (west coast, session and hazy), a pale ale, a pilsner and a black lager.

Piston’s & Palms (Pilsner, 5% ABV). I’m not a huge fan of pilsner but this one is pretty good. It is heavily hopped, so it isn’t like a typical pilsner. Clear straw in color, light maltiness, an almost fruity flavor, a medium/creamy mouthfeel and a soft and persistent head.  3.25/5

Oil & Water (Black Lager, 4.2% ABV). A nice example of the style. Roasty malts come through with a hint of chocolate and ash and a slight sourness. Not very different from a light porter really.  3.5/5

So, overall, I would describe the beer as decent-to-good, though the range of styles is pretty narrow. The west coast IPA is quite good, really. The question is, why should you go to this industrial tasting room rather than any of the others, or why should you come here instead of going to one of the many breweries in Vista that make notably better beer? Well, maybe you resonate with the theme. Small breweries deserve a shot to grow and evolve, and need your business to get there; supporting local breweries seems like a good thing. And maybe you’ll discover a beer you really like. That’s one of the joys of exploring craft beer, there isn’t a single beer that is “best” for everyone.