How many breweries in San Diego? January 2019 edition 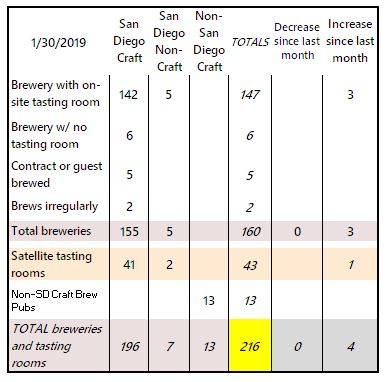 The January 2019 update on #breweries #brewery and #tastingrooms #tastingroom locations in #SanDiego. SD is now home to 160 breweries (+3 compared to December) and 43 tasting rooms (+1) as of the end of January 2019.

As of January 30, 2019, San Diego County is home to 155 craft breweries (+3 compared to December), 5 non-craft breweries (no change), 43 tasting rooms (+1), which makes it 203 SD beer locations in total (+4 since December). Overall, counting all locations (including SD and non-SD, craft and non-craft), there are currently 216 beer locations in the county (+4). There were no deletions from THE LIST in January 2019.

My 2018 “The Year in San Diego Beer” was quite a popular post, boosting my traffic on this site to an all-time high. Thanks to everyone who is interested in these things. It is good to know there are people who appreciate the work I’m doing. Crunching data can be a lonely, thankless task.

Little Miss Brewing’s East Village tasting room appears to be in a soft-open phase as of early January 2019.

Not beer, but AleSmith opened a cheese factory on their brewery campus.

The Bell Marker has closed their original restaurant operation. The brewery still remains, and a new kitchen will now be co-located there, named Owl Drug Co. after the original occupants of the building back in the day.

The kitchen at Attitude Brewing is finally open and they will host a grand opening party on Feb. 1.

Eppig Brewing, founded in 2017 in the North Park Brewery Igniter, has just signed a lease on a new property in Vista that they plan to open as their new brewery and tasting room by the end of 2019. It is a large space with room for future expansion, and they will immediate increase their capacity to 3500 bbl per year.

Kilowatt Brewing, based in Kearny Mesa with an Ocean Beach tasting room, will be opening an additional tasting room in Oceanside, just around the corner from Breakwater Brewing. They expect to serve their first customers there in summer 2019.

I’m not sure if it was the government shutdown or something else, but it looks like Guadalupe Brewery will not meet their goal of opening their tasting room in downtown Vista in January 2019. Hopefully that means it will be open very soon.

Intergalactic Brewing, which went out of business at the end of July 2018, posted a cryptic message to social media near the end of January with a link to a countdown timer that says “News Coming.” So, look for an announcement from them at noon on February 2. Reopening, perhaps?

A year or more ago I saw a press announcement about “North 40”, a multi-vendor food and beverage destination to be constructed next to the Carlsbad flower fields. Second Chance and AleSmith were announced as planning to install tasting rooms there. I received word in mid-January 2019 that the North 40 project is no longer in the works for Second Chance, and I presume the same is true for AleSmith. I’ve removed those two from the locations in planning list. Let me know if you know something different.