How Many Breweries in San Diego? November 2019 Edition 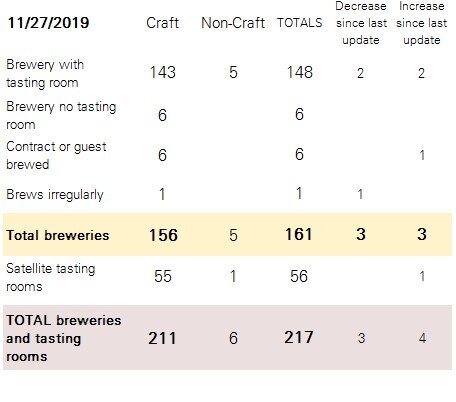 Lost Abbey’s new satellite tasting room (their second after The Confessional in Cardiff) opened in the lovely San Elijo Hills Towncenter (technically part of San Marcos) on November 1, 2019. Be excited: this one will be a great spot in a great area. They are also finalizing a lease on a tasting room in downtown San Diego’s East Village, probably to open in about nine months. (+1 tasting room)

On Nov. 8, 2019, Dogleg Brewing soft-opened next door to the new Eppig location in Vista, just down the block from Helia Brewing. That will make a nice little brewery crawl. (+1 brewery with tasting room)

I’ve seen several posts to a Facebook group by Hopnonymous Brewing that indicate they are actively brewing. There was no announcement of their official opening, but that makes sense given their business model, which is to brew house brands for restaurants and bars on the down-low. (+1 contract brewery)

Mike Hess Brewing will open a tasting room at Seaport Village (co-located with City Tacos, as in the successful Imperial Beach location). My guess on this one is mid-2020.

Unpaid taxes were just the straw that broke the camel’s back in the case of Barrel Harbor Brewing in Vista. They’ve been in financial trouble for quite a while, largely stemming from an ill-advised partnership with a gaming store in Miramar, according to the owner’s social media posts. He’s badly underwater, and now that he has been closed down until he pays his back taxes, there is no way to earn money to pay those taxes. Which means that it is possible that this brewery will reopen, but very unlikely. (-1 brewery with tasting room)

After closing the tasting room and later removing their brewing system, now their Facebook page notes Embarcadero Brewing as “permanently closed.” It isn’t clear if they will reopen elsewhere. But for now, they are off the list. (-1 brews irregularly)

Barrio Logan’s Alta Brewing has decided to close as of the end of November 2019. West Coaster’s article about it cites challenges after the failure of the original partnership and a lack of capital as the reasons. (-1 brewery with tasting room)

Going soon: Eppig Brewing’s North Park brewery will cease operations on December 1. They are now only brewing at the new Vista brewery. The tasting room on the water in Point Loma is still going strong, too. (Anticipate -1 brewery in December’s update but remember it is a swap with the +1 for the Vista location in October, and a major upgrade.)

Coming soon: Puesto Cerveceria in Mission Valley is on track to open very soon according to a conversation I had with head brewer, Doug Hasker, a month or so ago. Tap Room Beer Co.’s North Park location is getting closer, though they are still reluctant to give an opening date estimate. Those are the last two that I’m aware of that could open before the end of 2019. But my “In Planning” list includes 24 breweries and 20 tasting rooms, so 2020 could be quite a busy year. You’ll see more details in my 2019 in Review post at the end of December.