How Many Breweries in San Diego? July 2018 Update 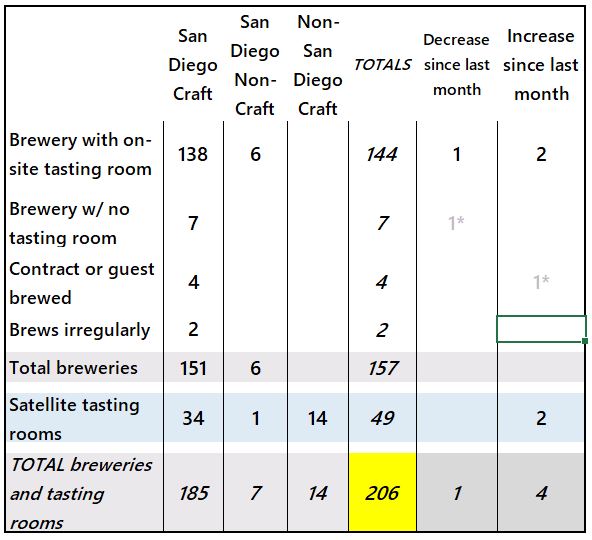 Alta Brewing ceased operations in June due to a partner dispute. It reopened in late July. It could be disputed whether this counts as a “closing” since I would guess the corporation wasn’t dissolved, etc., but since they released announcements to the effect that they were closing, I’ll count it.

Julian Beer Co. (finally!) had their (re-)opening on July 4. (Note the slight name change from their previous incarnation that closed in 2016.)

After a long wait due to permitting obstacles, Benchmark Brewing’s Bay Park tasting room soft-opened on Friday, July 13. I am super-confident that this spot will be a huge hit, not least because their “beer flavored beer” is excellent. It is located at 4112 Napier Street: as of this writing the location is so new that map apps don’t know about it yet.

The third Amplified Ale Works location (after the original brewery in Pacific Beach and the Brewery Ignitor location in Miramar), a tasting room with food, is now open downtown, at 14th and Island.

According to a West Coaster article, Helm’s Brewing will be rebranding as Two Roots Brewing and will be switching focus to brew non-alcoholic marijuana-infused beers sold in cans. I assume it will only be available through pot dispensaries. I do not know what will happen with the Ocean Beach tasting room as a result–maybe they will still serve Helm’s beer there?

ChuckAlek Independent Brewers in Ramona is closing at the end of July. Their North Park Biergarten tasting room will close at the beginning of September. I doubt anyone will buy the Ramona location, but someone with beer chops and money should snap up the North Park location.

Attitude Brewing is anticipating opening in the first week of August. The signs are that Duck Foot and Mikkeller are very close to opening their tasting rooms in East Village and LIttle Italy respectively, too.

Not quite closings, but not opening either

The Coronado Brewing Co. Imperial Beach Bikeway project seems to be dead. Their would-have-been-neighbors Trident Coffee told me that they learned in early July that the space will be up for sale. That’s a real shame. It is an awesome location in an awesome setting.

There are no signs of life for Barrel Rescue Brewing. It has had no Facebook activity since 2017, and its website returns a 404 Not Found error. I’m removing it from my “in planning” list until I hear something else. As reported in West Coaster, they were due to open in March, then close in June (due to their building being sold). Unsurprisingly, that bad plan didn’t happen. There’s no news anywhere I can find to indicate that they will open anywhere else any time soon.

The former Depot Springs in La Mesa that closed mid-construction has been purchased by a local restaurant group and after an additional projected $2 million in construction will open at the end of 2019 as Draft Republic Brewing.