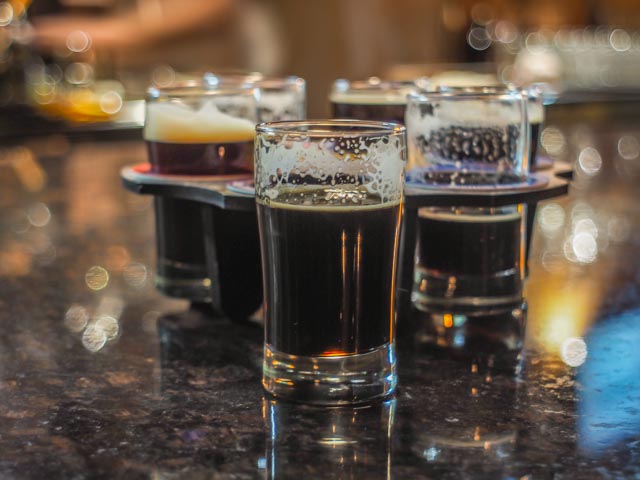 Some people love Dos Desperados Brewery in San Marcos. I didn’t have a great experience there. #craftbeer #sandiego

I came to Dos Desperados after stopping at the nearby Rip Current location. Maybe it was the relative superiority of Rip Current’s offerings (they were GABF 2015 Small Brewery of the Year, after all), but I ended up unimpressed with Dos Desperados. It may well appeal to you, but it wasn’t my mug of beer, so to speak.

Service was decent, but there were two groups of regulars at the bar and they got all the bartender’s attention–the usual and admittedly very human service flaw I see at locations that don’t draw new people very often. Unfortunately, on my visit at least, the regulars weren’t the sort of people I would want to spend time with. Classic bro/toxic masculinity BS. I’m not kidding: There was very nearly a fist fight between a regular and an off-duty bartender, something I have never seen at a craft brewery.

On a different day, maybe the service/clientele issues would have been different. Don’t let my experience on those fronts keep you away.

However, the beer wasn’t up to San Diego standards, in my opinion. I got off on the wrong foot with this:

Doppelbock-coconut (Doppelbock with coconut flavor, 6.5% ABV). I quote from my Untappd entry: “No no no. Tastes like suntan oil and bile.” This beer has the distinction of being the lowest rated beer of the nearly 1000 I have checked in on Untappd. Maybe my pour was especially bad or maybe it is just me, because the other 8 raters on Untappd who gave a rating seemed to like it quite a bit.  0.75/5

In comparison the next two beers I tried were a big improvement, but still nothing to write home about.

Not all was lost, at least:

Sultry Stout (Oatmeal Stout, no ABV). Hope restored. Not great, but decent. The cinnamon is nice.  3.5/5

When I have a negative reaction to a place, I always try to check and see if I’m “off” in some way. On Yelp, this place has fans. On 78 reviews, the average is 4.5 stars. There is polarization, though: plenty of 2s and 3s, with complaints about service and beer quality being the most common negative themes. Similar on Google Reviews. People who love it really like the owners, and some people seem to love the beer. Differences in tastes are partly what makes this whole craft beer thing so interesting.  Beer Advocate’s average rating for the brewery is 3.44/5 (or “okay” on their scale). On Untappd, the brewery averages 3.57/5. So I guess my reaction is not completely out of line. If there weren’t 180+ beer breweries and tasting rooms in San Diego, I might go back to give it a second try.