Home Brewing Co. is doubly good: The best home brewing shop in the country, and an excellent place to taste some award-winning #localbeer #craftbeer #sdbeer #sandiegocraftbeer.

I had such a good experience here when I first visited, way back in December 2016, that I could only imagine that it would be a great experience this time, too. I was not disappointed. I visited at the end of May but haven’t had a chance to post this write up until now. It turns out to be good timing, though, since now my post can include a mention of the fact that The Homebrewer (where Home Brewing is based) was awarded Homebrew Shop of the Year at the recent 2018 Annual Homebrew Competition. Congratulations, too, to the members of San Diego’s QUAFF (Quality Ales and Fermentation Fraternity) for winning Homebrew Club of the Year for the third year in a row. San Diego really does have something special when it comes to beer.

The occasion of my visit to Home was a special can release, a collaboration with Lemon Jesse, Instagram’s @thesherbertpervert, a swell guy known around the San Diego craft beer scene in part because of his work behind the bar (recently, at Eppig) and for his truly off-the-wall graphic design sensibilities. Lately his nearly-daily Instagram stories about the weird crap he finds in the belly of the AMC he also works at has been the best thing in my feed. (Yes, perhaps I do need to follow some more people.) My photographic portrait of Jesse taken at this event might be my favorite photo ever. 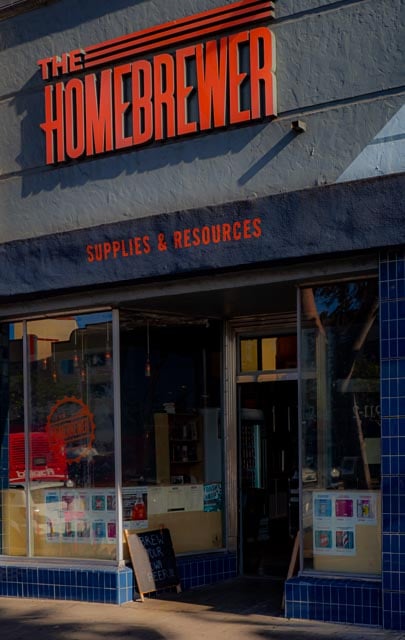 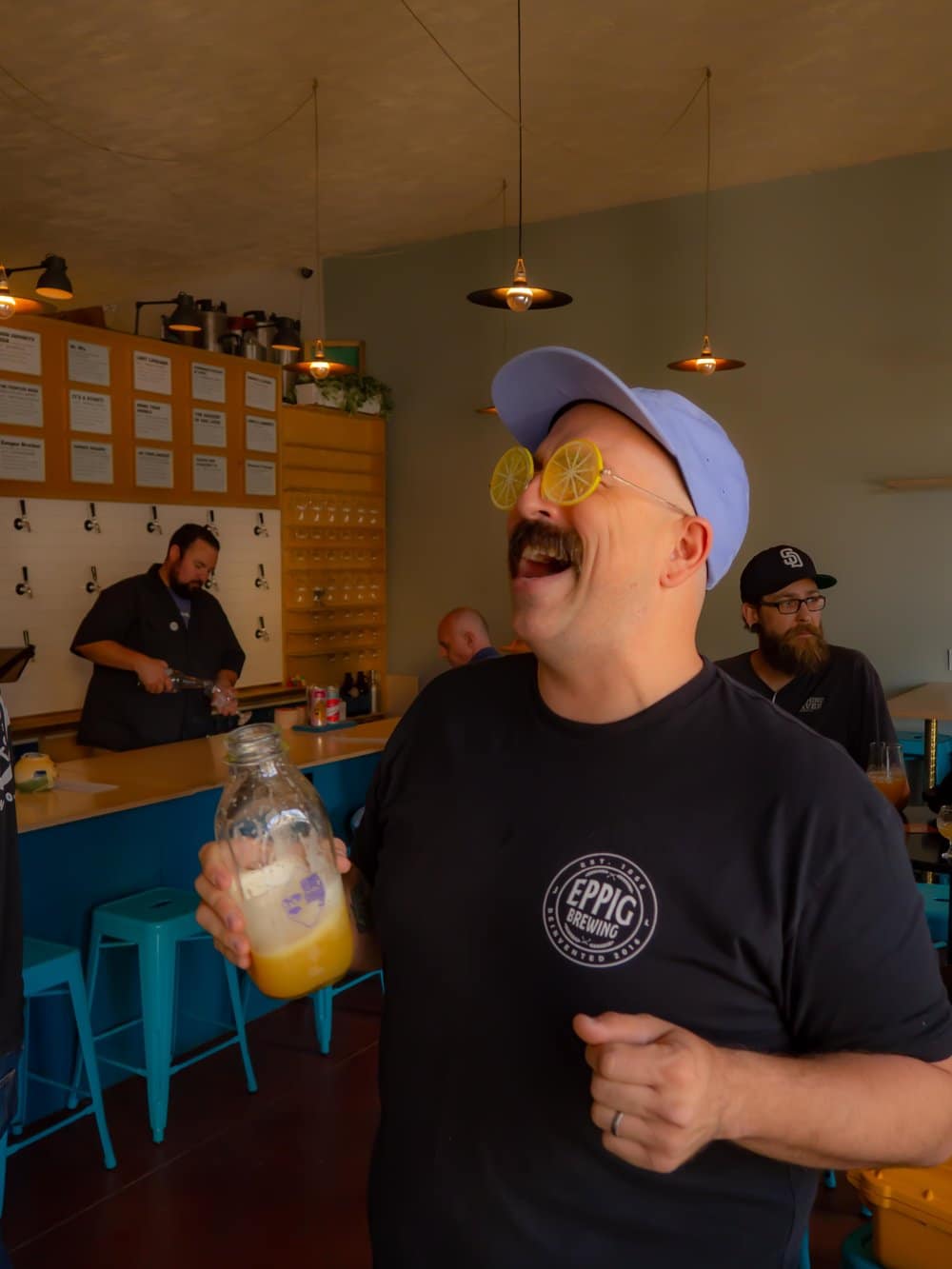 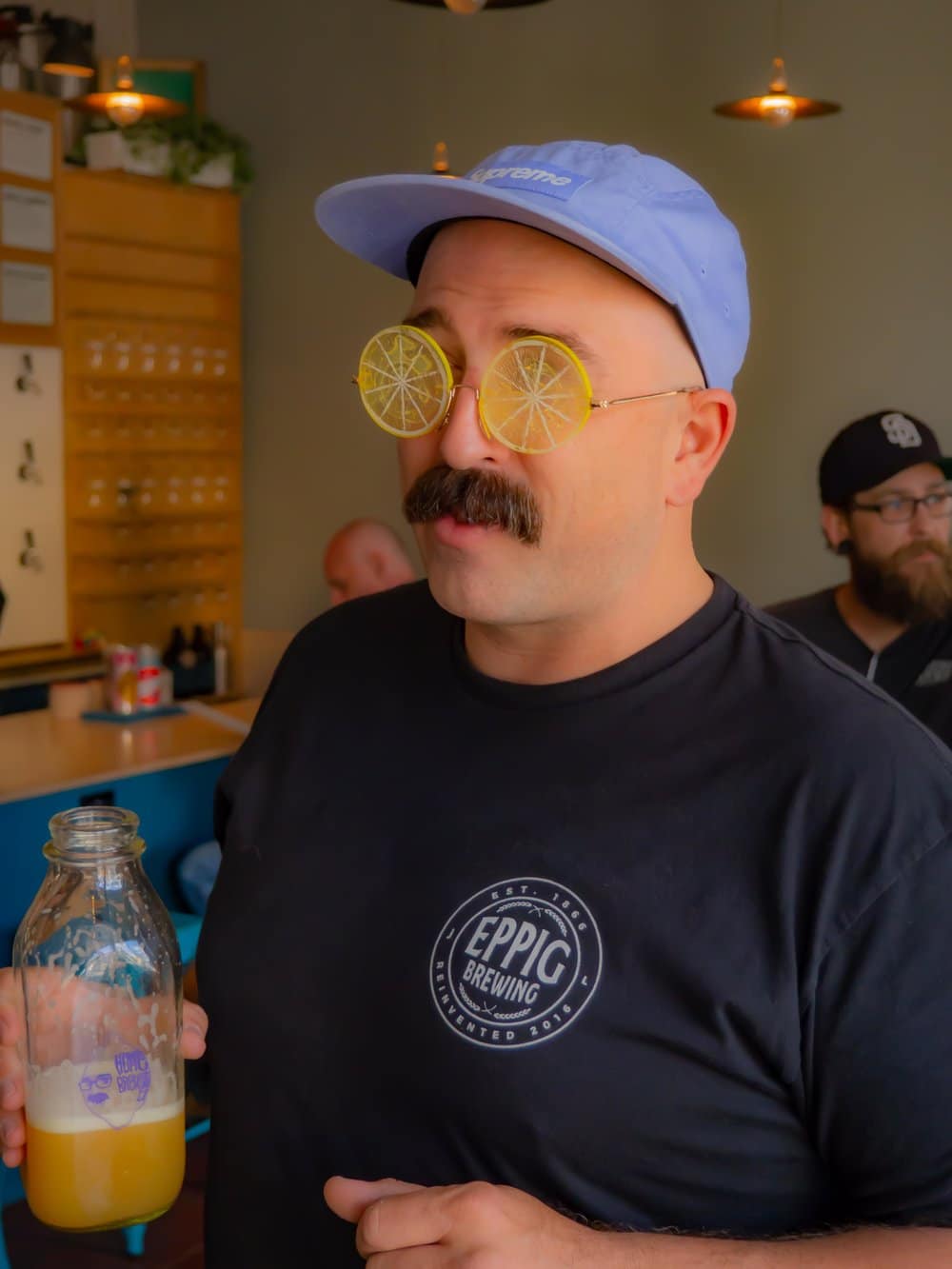 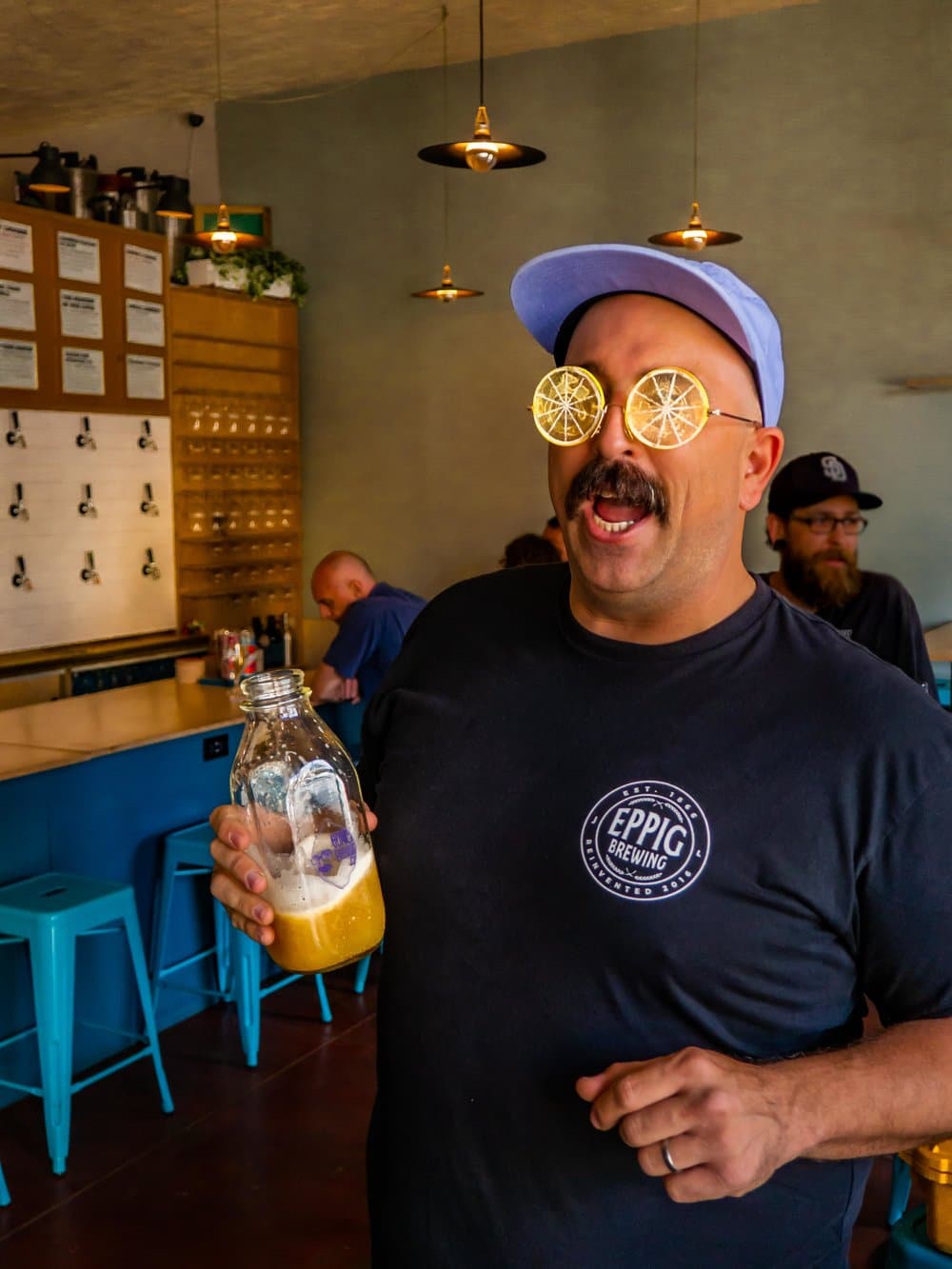 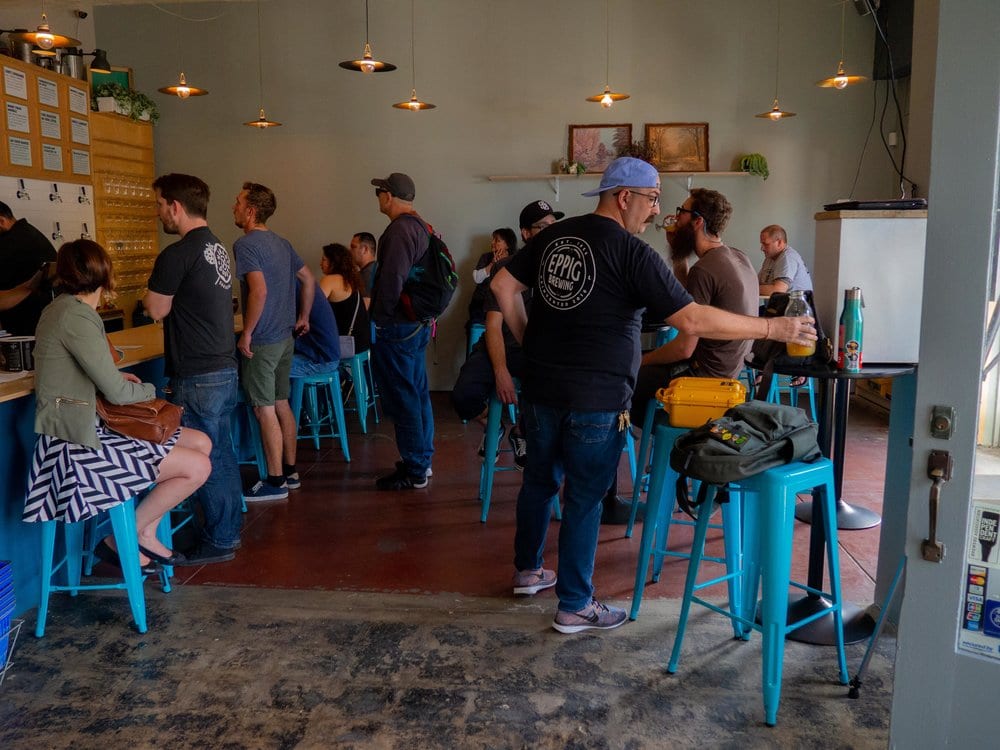 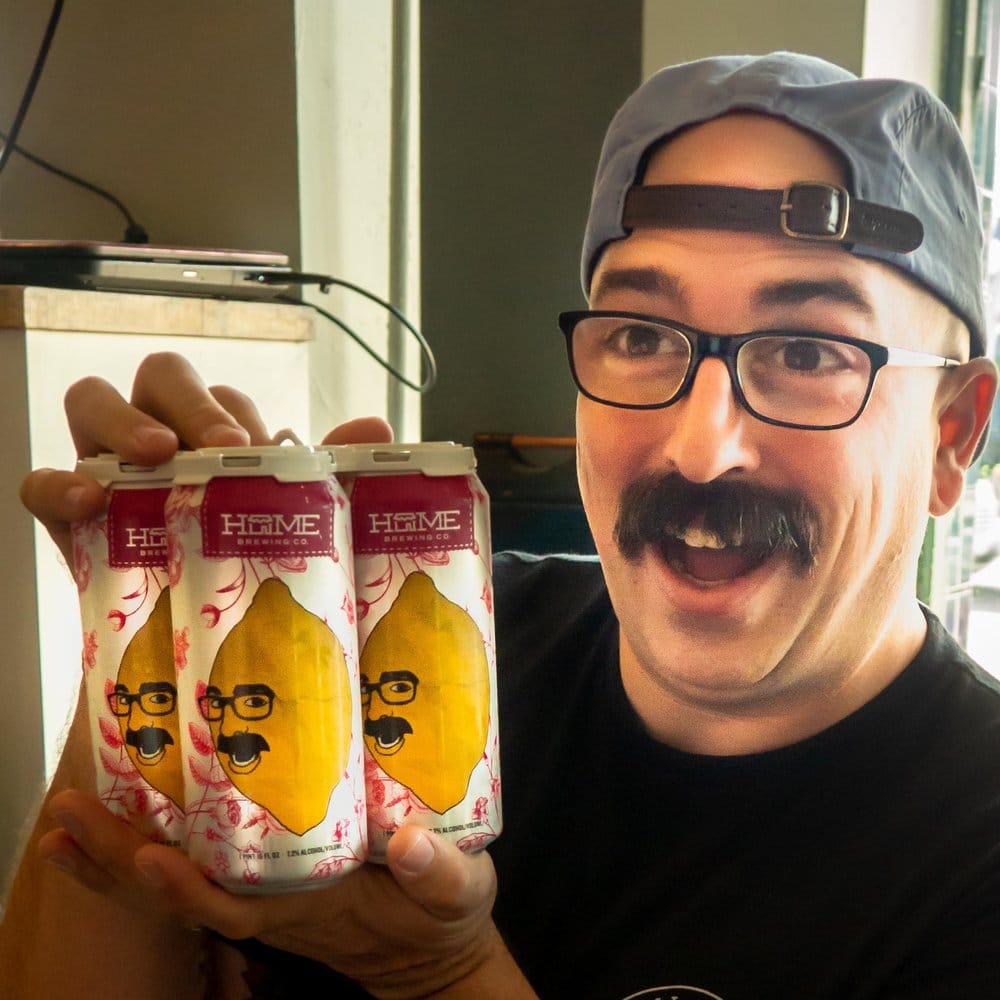 The can release was for a beer called, appropriately, The Sherbert Pervert, a lactose-loaded hazy IPA with a citrus creaminess that reminded me of a slightly bitter Creamsicle. In case you were wondering, yes, that is a good thing. At the same time as the can release, Jesse was selling branded milk bottle-shaped beer glasses to raise money for a dog rescue organization. The event was a big hit: Jesse and George (Home’s owner) bring in great people, so the vibe was excellent.

I also sampled a few of Home Brewing’s regular offerings poured on tap in the tasting room. Home started out as a homebrew shop, then expanded to include a tasting room to offer samples of the kinds of things they can help a homebrewer make, and then they built out the tasting room even farther. George, the owner, teaches in the Business of Craft Brewing certificate program at SDSU and he is a very skillful brewer. His knowledgeable head brewer is doing great work, too, having just medaled THREE TIMES at the San Diego International Beer Competition. As expected given these bona fides, all the Home beer I tried was very good.

The tasting room renovation looks good. It is an open, comfy space that integrates well with the homebrew shop. You can even sample a beer while you walk around and browse the shelves for homebrewing inspiration. Plans are afoot to put a patio out front, which will be a great addition.

I wish I lived closer to North Park; if I did, I’d go Home more often.