How Many Breweries in San Diego? June 2019 Edition 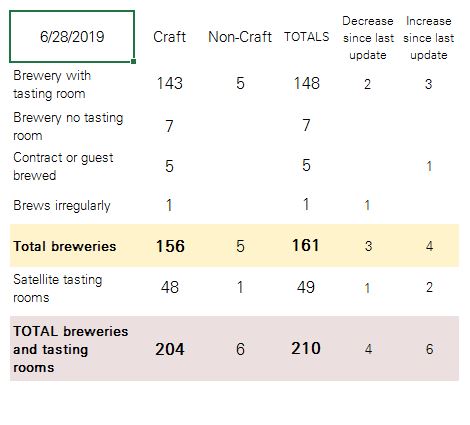 June 2019 was an active month. One brewery closed, one tasting room closed, two breweries opened, and one tasting room opened. One brewery changed categories, from “brews irregularly” to “brewery with tasting room.” One correction: I had removed Acoustic Ales from the list because I had heard they were no longer guest brewing at Latchkey, but that turned out to be wrong. I also needed to move Carlsbad Brewing Company, who will brew Acoustic, to the tasting room category since they are not yet brewing. That brings the totals to: 161 breweries (+1 net) and 49 tasting rooms (+1 net), for a grand total of 210 locations (+2 net). Plus, there are the 13 “Non-San Diego Craft Brew Pubs” run by Oggi’s and BJ’s, but I have removed those from my charts as of this month.

Several new projects were announced this month. I am aware of 19 breweries and 21 tasting rooms currently in planning or construction. I judge that about 27 of those projects have at least a good chance of opening before the end of 2019.

By the way, for the year so far, San Diego is up a net of seven locations: There have been thirteen openings and six closings year-to-date. That’s a net of 3.4% growth in six months.

The LIST of breweries and tasting rooms is now a sortable spreadsheet, continuously updated throughout the month.

It was sad but not entirely unexpected, given the troubles they experienced a few months ago, when Benchmark Brewing announced on social media that they had officially ceased operations at 3 pm on June 9, 2019. This means their Grantville brewery and Bay Park tasting room are both closed (-1 and -1 from The List). It is a great loss. I will miss their “beer flavored beer”, especially the Brown Ale and the Oatmeal Stout. If any brewery deserved to thrive—such nice people making such great beer—it was Matt and Rachel at Benchmark. But I know that they will go on to do more great things in the beer industry. Matt, after all, was the head brewer at AleSmith when they won the 2008 Small Brewery and Brewer of the Year, and since then he has racked up a slew of his own medals at Benchmark, including for Oatmeal Stout, one of the best examples of its kind that you could find.

Stave & Nail Brewing Co. focuses on mixed-fermentation sours. They barrel-age wort from next door at Rip Current Brewing in San Marcos. According to a social media post they are also making some hard kombucha. The grand opening was held on the weekend of May 31. The plan, as I understand it, is for them to be open one weekend a month. But as I write, the tasting room page does not say when the next opening date will be. They ran out of beer on their first day and weren’t able to open for the Sunday of that first weekend, so it looks like they have some fans.

Original 40, named for the forty acres that first composed North Park, is a restaurant and brewery concept in, you guessed it, North Park. They went to a lot of trouble with the interior design, menu, etc., so I expect good things. Opened in early June after a brief soft-opening period.

The new tasting room/brewpub for Bolt Brewing and Spirits announced via social media that they are already operating in their second La Mesa location as of the first week of June, 2019.

West Coaster has a nice pre-opening announcement for San Marcos’s My Yard Live, which will open to the public on July 1.

Little Miss Brewing announced a little while ago that they were planning new tasting rooms in La Mesa and one other locale that went unnamed. We have now learned, through a liquor license posting in a store window, that the mystery location is in Escondido.

Last month I added Dogleg Brewing to the In Planning list. This month, Instagram shows they are already making lots of progress on their tasting room build-out. But IG also had a post from a Patreon crowdfunding event, and they have been regularly posting to get more crowd-funding. I’m wondering if they have the capital to get open.

National City will get its second brewery when Hannegan’s House Beer Co. & Creamery opens in fall 2019. Yep, ice cream and beer. Fun for the whole family!

Plan 9 Ale House, which I visited recently, has moved categories from “brews irregularly” to “brewery with tasting room.” They have hired extra help in the brew house and are now offering several of their beers all the time.

The Gordon Biersch tasting room in Mission Valley will be closing in mid-July after 20 years. The San Diego beer community is mourning this loss. It looks like it isn’t just a local issue though: Gordan Biersch owners CraftWorks have been closing other GB restaurants around the country since 2018 (San Jose, Atlanta, D.C., and more).

On a more positive note, San Diego-based restaurant chain Puesto will open Puesto Mexican Artisan Kitchen and Bar in the former-Gordon Biersch Mission Valley location, and they will start their own brewery there, Puesto Cerveceria. Even better news is that Doug Hasker, the head brewer at Gordon Biersch and world famous as an expert in brewing lager-style beers, has been hired to be head brewer for the new company. As usual, West Coaster has all the deets.

Helm’s Brewing is officially no more—it was purchased by a cannibis-focused venture calling itself Two Roots Brewing way back in 2018. They closed the tasting room at the Kearny Mesa brewery, where they now brew and dealcoholize beer for shipping to Nevada were THC derivatives are added to it. They still make (good) regular beer, too, though, which they have been selling at the Helm’s Ocean Beach tasting room. That tasting room has now been officially rebranded, too, to Two Roots. I recently visited and did this review.

Burning Beard is going to add a kitchen around the end of the year in their El Cajon home base.