How Many Breweries in San Diego? January 2018 Update 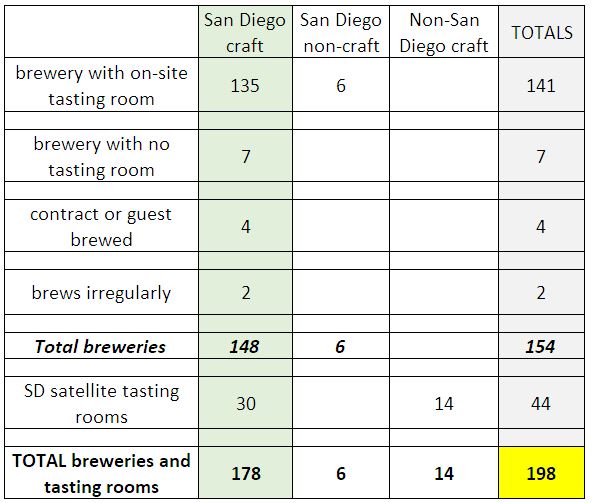 The race to 150 is still on! With four closings and three openings since my last update, there are currently 148 craft breweries (154 including non-craft breweries) and 198 San Diego beer locations in total (one less than last month). #sdbeer #craftbeer #sandiego #craftbreweries

Here is The List of all the breweries and tasting rooms in San Diego County.

Shortly after I posted my review of Kuracali Beer and Sake Brewery in December 2017, they closed their doors for good. It was not unexpected: The bartender on our visit told us of a planned renovation. It isn’t clear whether or not they will actually reopen, though that seems to be the owner’s hope.

The end of 2017 saw several more closings: Oceanside Ale Works, La Jolla Brewing, and SpecHops Brewing. OAW later announced that after the dissolution of that partnership completes, the active partner plans to reopen in the same space under a new name.

OAW was the longest-running brewery in Oceanside (six years), and SpecHops had been open just a year. Do the places that have closed recently have anything in common? Being undercapitalized and serving merely-average beer. And, by coincidence, being non-members of the San Diego Brewers Guild. The latter point is likely an effect rather than a cause: They were probably too cash poor to pay dues, and being cash poor was probably what led them to shut down. It is worth noting, though, that 16.2% of San Diego craft breweries are not members of the San Diego Brewers Guild.

Four breweries closing in a bunch gives a bad impression, but it is only 2% of operating breweries in San Diego County, and that’s in a year that saw 17 net new breweries, an increase of 13% over 2016’s final total. Add to that data point the fact that two breweries opened in January: The Bell Marker Brewery and Restaurant and KO Underground Brewery and Restaurant, both located downtown.

Benchmark Brewing has made significant progress on a tasting room build out in Bay Park, but according to messages I exchanged with the owner online, it may not happen after all: the city (not the ABC) has so far not granted a permit and the carrying costs are too high to keep waiting. That’s a damn shame. Benchmark’s beer should be everywhere.  The City of Ocean Beach similarly killed Little Miss Brewing’s nearly-finished tasting room a few months ago as well. The system needs to change so that small business owners don’t lose tens of thousands of dollars by having to build out on a gamble. Permitting and licensing authorities should either approve or disapprove them beforehand. It strikes me that the current way of handling these things smacks of Puritanism–which is a little out of fashion in most of American life at the moment.

San Diego Brewing Co. has recently announced that they will be vacating their Brewery Ignitor space in North Park and opening a new brewpub location soon. This is exactly the stated purpose of the Brewery Ignitor: It is a place for breweries to do proof of concept and then move on to new facilities. It is good to see it work in this instance, after last year’s failure of Wiseguy Brewing in the north county Brewery Ignitor. This also likely means a new brewery will soon be moving in next door to Pariah and Eppig.

Although breweries keep opening in San Diego, the pace seems to have slowed in recent months. Perhaps this is merely a seasonal fluctuation (more breweries open in summer, I think). In fact, closings have been outpacing openings since November, though only slightly. The total is down two since November, and up five overall since July. I expect two or three additional openings in the next month or so; so far, I have no information about any pending closings (besides the location swap for San Diego Brewing North Park), but closings are usually announced at the last moment so we’ll see how things go.