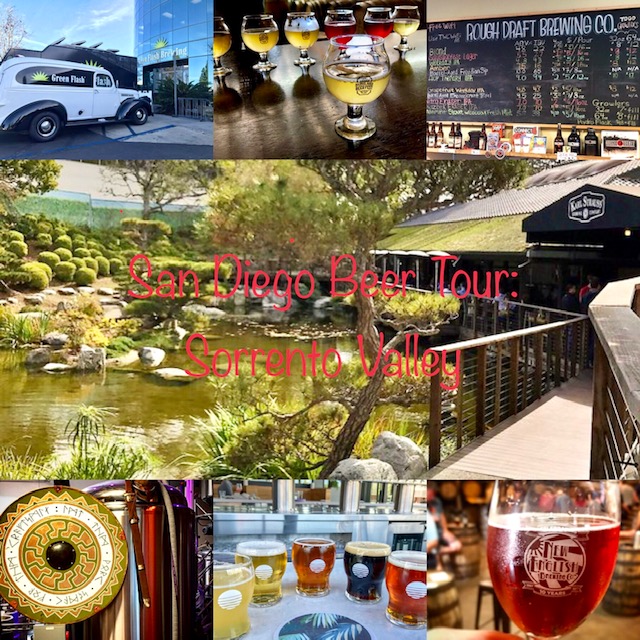 There are seven very good craft breweries in Sorrento Valley. It deserves to be better known as a beer destination. #sdbeer #beertour #pubcrawl #craftbeer #SanDiego #beercation

Miramar’s second-cousin hasn’t gotten the attention it deserves. But now that the outstanding Gravity Heights brewery and restaurant has opened there, Sorrento Valley might have enough “gravity” to attract the attention it really deserves.

There are technically six breweries and tasting rooms in Sorrento Valley, but I’m going to make it seven for the purpose of this beer tour: New English Brewing is officially in the Torrey Preserve neighborhood, but no one ever uses that term and NEB is on Sorrento Valley Road just a mile and a half from the nearest Sorrento Valley beer location. You can get to all seven locations in about an 8-mile trip. This area is definitely not walk-able.

West to East, here are the locations:

Green Flash Brewing, and an update

My recommendation for a “top three” tour would be New English, California Wild Ales, and Gravity Heights. New English has the best beer, California Wild Ales has the most interesting beer, and Gravity Heights is the best overall venue in the area. That’s assuming you have been to or will go to another Karl Strauss location another time—Karl Strauss was the Great American Beer Festival’s Mid-Size Brewery of the year in 2016, and completely deserves the accolade. Their Sorrento Valley location is tucked away in a quiet garden with a large koi pond. I should add that if you have an affinity for or nostalgia for Green Flash, that is also a very good stop. Karl, Gravity Heights, GF and Rough Draft all have kitchens; New English and the others often have food trucks. There isn’t a bad option in the bunch. Don’t sleep on the Bottlecraft craft beer tasting room and bottle shop nearby, either: It sells excellent beer and has a wonderful patio.