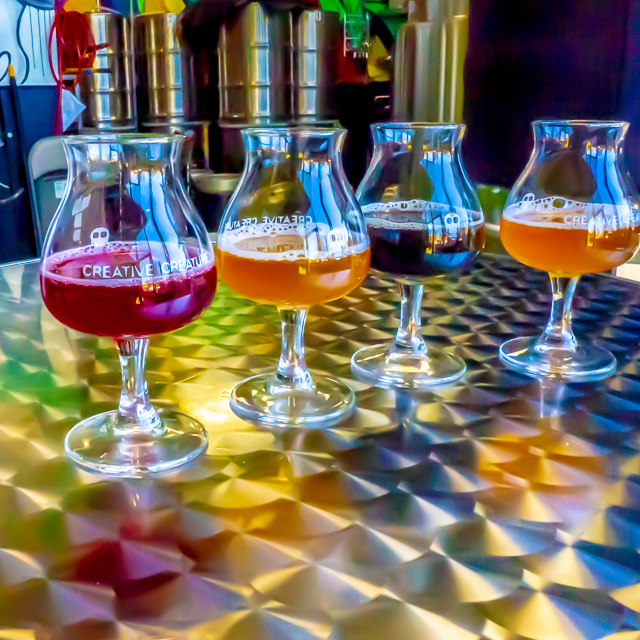 Just a few months old at the time I visited, Creative Creature Brewing has a small though nice set up. They join a fairly crowded craft beer landscape in La Mesa/El Cajon/Santee.

I dropped by Creative Creature at the end of October, but I’m just getting around to writing it up now. That’s partly because of an illness, partly because of being busy at work, but also partly because I just wasn’t that excited about my visit. To be clear, there was nothing negative about it. The staff were friendly, helpful and welcoming; the interior is well-finished and has some nice artistic touches; there is a pleasant patio; I like their glassware. The beer was decent, though as you might expect from a still-new brewery, not quite up to typical San Diego standards yet. I didn’t detect any flaws or off-flavors, but none of the four beers I tried were ones I would eagerly drink again. Your mileage may vary, which is part of what’s exciting about craft beer–everyone likes different things. In this case, I expect, more time on the brew system will enable them to dial in their recipes.

The location has some disadvantages, including being very small. The inside is mostly taken up by the tanks and the counter. There’s no bar seating and only a few other seats inside. The patio, while nice, is very narrow: it only has a few stools along a thin beer rail plus two small tables–even though there is only seating for about a dozen people, it ends up feeling cramped. Not a place to bring a large group of friends, that’s for sure. They are directly attached to URBN Pizza (they occupy the space that used to be URBN’s own brewery), but you can’t carry the beer through to the restaurant for licensing reasons. URBN Pizza doesn’t sell their beer either but I hope that changes [update 11/22/18: A reader reports that URBN did have two Creative Creature beers on tap when they visited more recently than me]: the guys at CC should get something for all the times they politely tell people who come looking for the pizza place how to get into the restaurant. [Related update: I wonder if URBN and CC couldn’t create a relationship like Resident Brewing has inside The Local restaurant.] 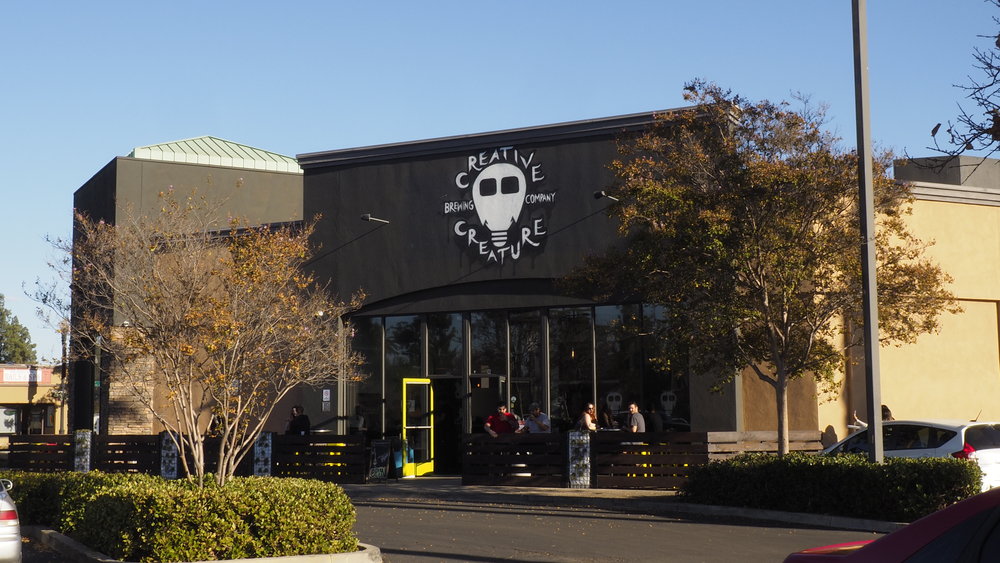 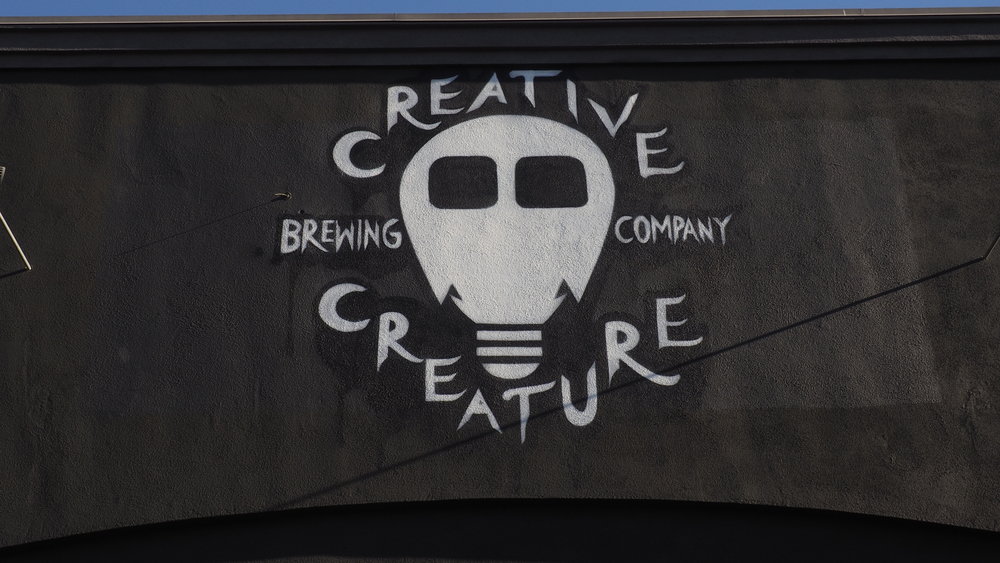 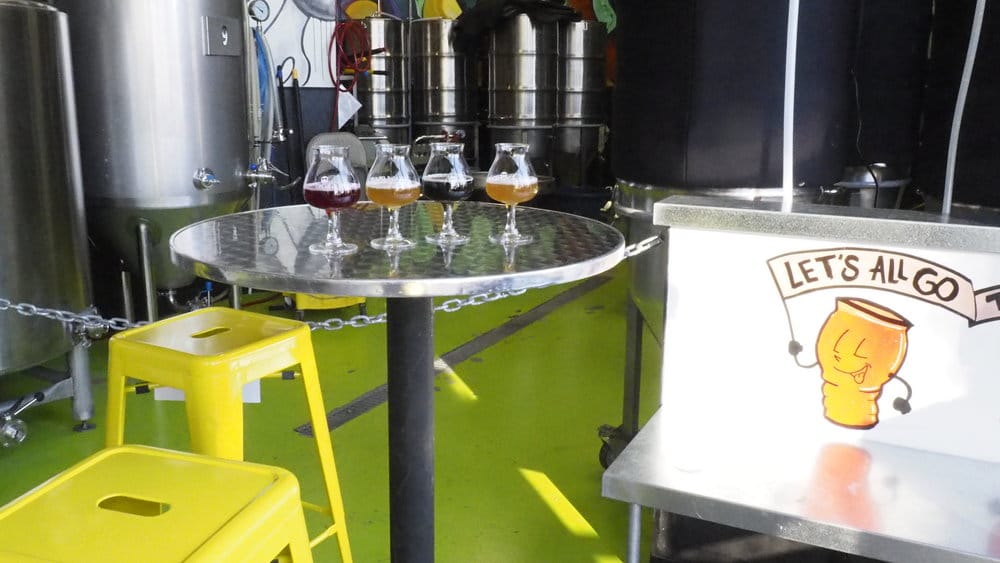 The upsides are easy parking, later hours than many breweries (3-10pm Thursday through Saturday, plus 12-5pm on Sunday) and being in a high-traffic area in the El Cajon village. Their graphic designer and social media person do a great job. They seem to have a strong following on social media. A fan base like that is always a good sign for a brewery’s future.

Cranbiscus (Berliner Weisse with cranberry and hibiscus, % ABV). This has a lovely bright ruby color, an almost nonexistent pink head, an aroma of red berries and rhubarb, and maybe a hint of cherry. The flavor is mostly just tartness with a bit of berry/cranberry. There’s something I can’t quite place on the finish–it’s a bit like graham cracker, perhaps? Since I’m not a huge kettle sour fan this doesn’t do it for me, but others seem to like it. 3.25/5

Tamarindo (Berliner Weisse with tamarind, % ABV). Sweet and tart, light with a medium mouthfeel. It has a light straw color with a thin white head ringing the glass. It is a bit cloying on the finish. 3.5/5

Cucuy Stout (Stout with coffee, 10.5% ABV). Coffee and spicy biscuit on the nose, coffee acidity and a light roasty flavor. Very dark, thin tan head. I would dial back the coffee and increase the malt. 3.25/5

It could be argued that the La Mesa/El Cajon/Santee area is underserved with respect to craft breweries, in which case there is room in the market for Creative Creature. They do have plenty of competition in another sense, though, with Burning Beard, BNS, Council, Groundswell, Helix, Pacific Islander, Bolt, and Fourpenny House (plus an Oggi’s and a BJ’s) all within about a four-and-a-half mile drive. To fit in with those heavy-hitters, Creative Creature will need to up its game over time.