How many breweries in San Diego? November 2018 update 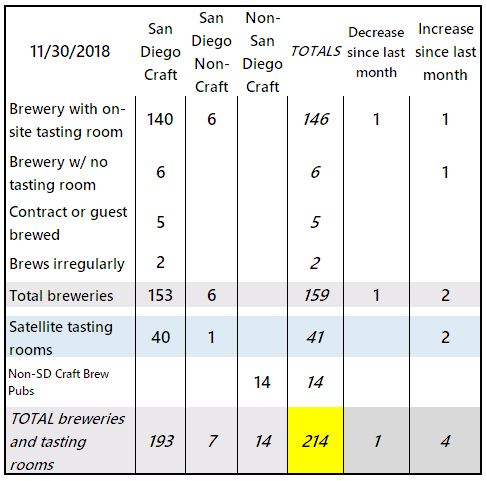 There are now TWO HUNDRED San Diego breweries and tasting rooms (including six non-craft breweries and one non-craft tasting room). Add to that the 14 non-San Diego craft brewpubs and…well, that’s a lot of beer. The net increase since last month is three, and the coming six weeks should see at least four new spots open.

I have removed several “in planning” breweries from my list since there is no indication anywhere that they are still live projects; let me know if you have other information (College Landing, Degenerate Brewing, Knox Corners, Legatus, Theiving Magpie). Although information online is contradictory, that fact itself plus the difficulty of obtaining information at all leads me to believe that KO Underground Brewery (which no one seems to have heard of anyway) ceased operating earlier this fall.

Hodad’s is a small local burger restaurant chain. They have entered the brewing space now, too. (Ketch Brewing is a similar kind of venture, a brewery owned by the local seafood restaurant chain, Brigantine.) Hodad’s Serra Mesa brewery is now in operation. There is no tasting room at the brewery, though, so the only place to get their beer is at the restaurants in Ocean Beach and Downtown. That is an addition of one brewery and two tasting rooms in one fell swoop. When baseball season starts up again, you’ll also find Hodad’s beer at their Petco Park concession stands.

Melvin Brewing’s East Village brewpub soft-opened in mid-November. This article from SD City Beat is relevant to your decision whether to give this Wyoming-based company your business. I had originally thought this to be just a tasting room but it turns out they will be brewing on-site, too.

Ebullition Brew Works of Vista will open a tasting room in Bressi Ranch, quite close to the Pizza Port production brewery and near the Culver, Burgeon, Rouleur, Papa Marce, Gaudalupe breweries.

Harland Brewing, founded by several of the people who started and then sold Saint Archer, is gearing up. Their website says “coming winter 2018”; I just saw an Instagram post indicating that their beer is for sale at some San Diego bars already, but it isn’t clear to me if their own brewery is up and running or whether they have guest brewed somewhere. Their website gives an address that is quite close to Newtopia Cider and the Scripps Ranch locaiton of Ballast Point. They have an extremely well-produced video on their site that tells the life-story-so-far one of their owners. It is about growing up in Oakland, turning pro skateboarder and riding Harleys. There isn’t a single beer or a mention of beer in the 12 minute video, so I’m guessing Harland is going to be a lifestyle brand, like Saint Archer.

It looks like several spots will open before or just after the New Year.

Double Peak Brewing in San Marcos is brewing and told me via Messenger that they are hoping for a soft opening around mid-December.

13 Point Brewing in Lemon Grove is brewing and says they’ll open as soon as they have a emough beer that meets their high quality standards.

Kairoa Brewing in University Heights has announced a January 15 target date for opening.

Gravity Heights in Sorrento Mesa had a job fair at the end of November and plans to open January 2019.