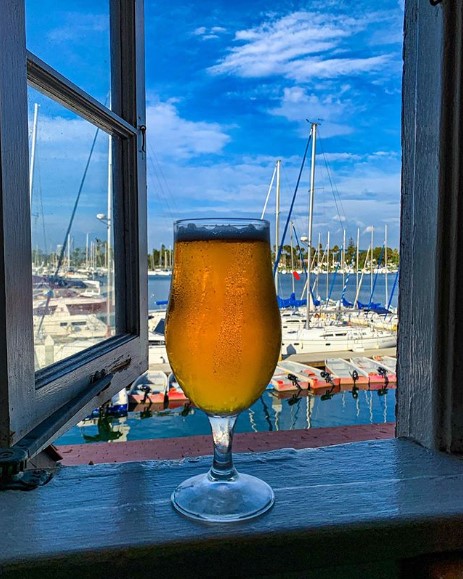 The three High Spot Beer Co. beers are contract brewed as Bluewater Grill’s house beer brand. They succeed in what they are trying to be.

Who the heck is High Spot Beer Co.?

This brewery will be a mystery to even most of the biggest beer nerds in San Diego.

Turns out, it isn’t really a brewery (hence the confusion): It is a house beer that is contract brewed (by Mission Brewery, according to what I was able to pry out of a bartender) for the seafood chain, Bluewater Grill.

You can expect to see more house beer brands in the near future in San Diego, once Hoponymous Brewing opens their doors later this year (in the former Council Brewing space in Kearny Mesa). Their business plan is explicitly to contract brew house brands and not say who they are brewing for. It should be pretty easy to tell, though, once new house brands start popping up at restaurants!

I visited the Bluewater Grill on Glorietta Bay, across from the Hotel Del Coronado and in front of the Coronado Yacht Club. It is a lovely setting. I highly recommend the upstairs bar. There is plenty of seating on both floors plus a patio. The middle-high end service was executed well: professional but still friendly and engaging.

There are three High Spot beers. The brand name, by the way, refers to fishing spots off the Californian coast where the ocean floor is shallower than typical for that distance from the shore, and the individual beer names pick out map locations.

These ratings and descriptions might seem damning in their faint praise, but in fact I think these beers are perfect for what they are supposed to be. They are for a wide audience of mostly non-expert beer drinkers who make an impulse buy because they like the feel of the restaurant. The beers are not supposed to be the focus when you are drinking them, just a pleasant, non-distracting accompaniment to friends and food. They are supposed to be refreshing and palate cleansing while eating seafood. Frankly, mission (Mission?) accomplished.

There are eight Bluewater Grills in California and one in Arizona. Coronado and Carlsbad are the two in SD County.