How many Breweries in San Diego? June 2018 update 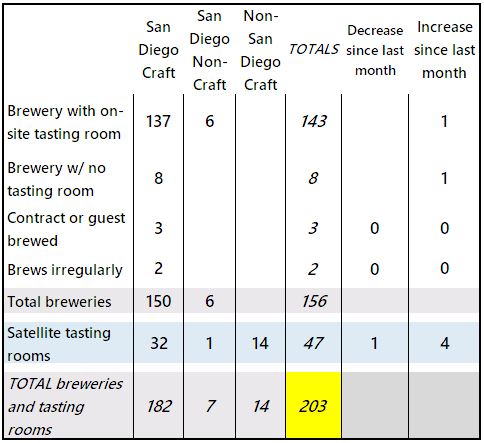 Monthly update on #SanDiego #craftbeer #sdbeer. Five openings since the beginning of May 2018; no closures. There are now 150 craft breweries in San Diego County, 6 non-craft breweries & 47 tasting rooms/brew pubs for total of 203.

Forgive me, reader, for I have sinned: it has been seven weeks since my last “monthly”  brewery update.

Here is the latest version of The List of every brewery, brew pub, and tasting room in San Diego County.

Bear Roots Brewing Co. has opened their second location, in downtown Vista. There are now four breweries there, in a very small area. Not only is the brewery density high, the quality level is high. Downtown Vista would make a great visit for a brewery tour. Gaudalupe is due to open their tasting room there later this summer, as well.

Council Brewing has opened their second location in Santee, in the spot that was formerly Finest Made Ales (which was formerly Butcher Brewing, and before that the spot was occupied by Twisted Manzanita, which moved on to the facility that is now owned by Groundswell). This marks the 180th San Diego-based craft beer location, and the 200th beer location in the county.

Mason Ale Works Tasting Room and Kitchen opened in Carmel Valley on May 29. This is the third Mason Ale Works location, the first that does not brew on site. The food program looks awesome, the location is beautiful, and they are right next the second Barrel Room (wine bar). Here’s my first look.

The Saint Archer tasting room in Leucadia is finally open.

Cerveza Xteca (which is the name of the only beer produced by SD Craft Beverage Co., as far as I can tell) was announced today just before I was about to publish this post. It appears to no have no tasting room and their website has next to no information on it in addition to being very difficult to use.

Golden State Brewing, based in Santa Clara, had a tasting room behind Voltaire Beach House in Ocean Beach. I’m not sure when it closed (the most recent Yelp review was about a year ago) but they are definitely not open anymore. All the remaining non-San Diego craft tasting rooms are BJ’s and Oggi’s–at least until Melvin opens downtown (currently projected for the end of 2018). It isn’t new, but I finally got around to adding the Oggi’s Pizza Express at SDSU to the list, so there is a net no change to the numbers in this category for this update.

To my knowledge, there have been no brewery or tasting room closings in the last two months. Maybe it is a summer reprieve, but more likely we are just back on track.

Amplified Aleworks has announced a new restaurant/tasting room in East Village that should open this summer. Duck Foot‘s East Village restaurant and tasting room is projected to open in June. Coronado Brewing has put Monkey Paw Pub & Brewery up for sale so they can refocus on their core business. East Village is becoming yet another craft beer hot spot in San Diego.

On June 9, Julian Beer Co., which has been shut down for renovations for a long time, made a post to Facebook that said, “So close you can almost taste it.” They were originally planning to reopen last summer. West Coaster just announced that the opening is planned for July 4, with a grand opening celebration later this sumemr.

Attitude Brewing is set to open in Barrio Logan in July.

There are currently 25 breweries in planning, and 11 tasting rooms in planning. My current guess is that 18 of those places will open before the end of 2018.