This well-designed tasting room in the graduate student housing complex at UCSD has an awesome patio and even a pool. Maybe I should go back to school…

External signage is non-existent, so this place is a bit hard to find. But that’s because it is really designed for insiders, the UCSD graduate students who live in the adjacent student housing. That said, non-students are entirely welcome.

There is some free one-hour parking (strictly enforced, apparently) outside the lobby to the building, but the parking structure next door may be a better bet. Use the more northerly entrance to the University City side of UCSD’s campus, Miramar St (the western extension of Executive Drive as it crosses Regents Road). From other parts of campus you can also take the UCSD shuttle which stops right here as well, saving the hassle of driving and parking.

Whichever way you arrive, once you do get there, walk around into the courtyard of the apartment buildings and you’ll see the tasting room in between the lobby and the pool.

It is a gorgeous venue. The Grad Pub at my alma matter was nothing like this. Concrete, glass and wood combine in that contemporary aesthetic that is so popular these days. It obviously feels new (the housing complex just opened in September 2017), but at the same time comfortable. The patio is modern and hip with plenty of seating, and you can even take your beer to the pool and hot tub if you let them put it in a plastic cup for you. The interior design is polished. There are a few long low tables inside, next to the small bar. In addition, you can take your beer into the lobby of the building immediately next door, where you’ll also find a ping pong table for your amusement. It would be a good venue for a large reception or meeting. Restrooms are near the pool, so you have to leave the tasting room to get to them. 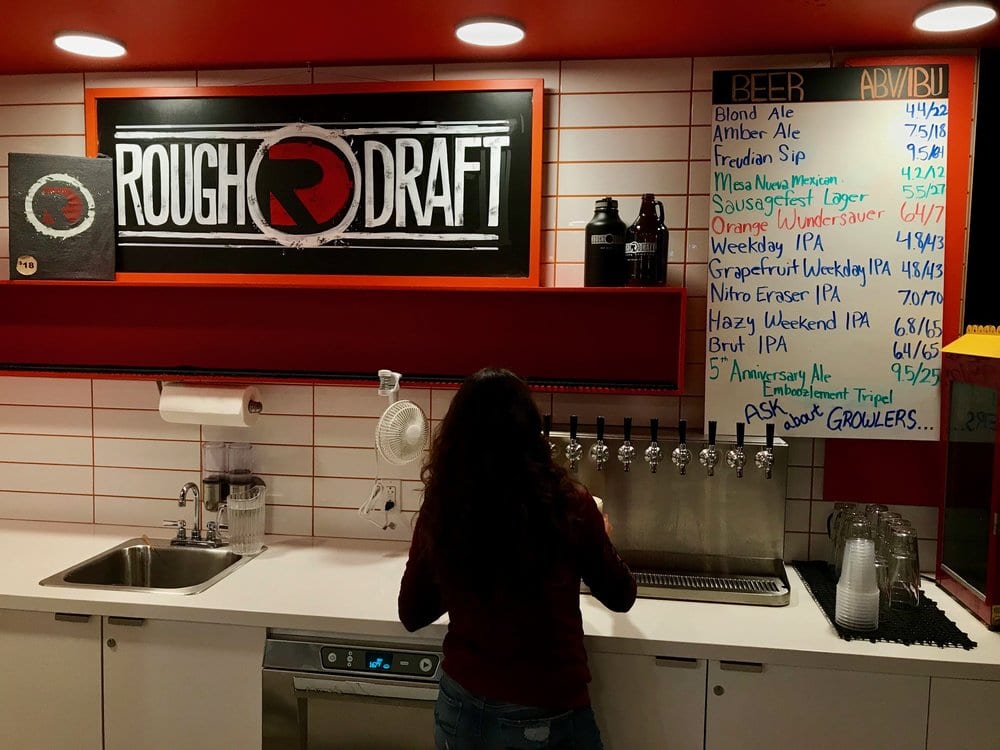 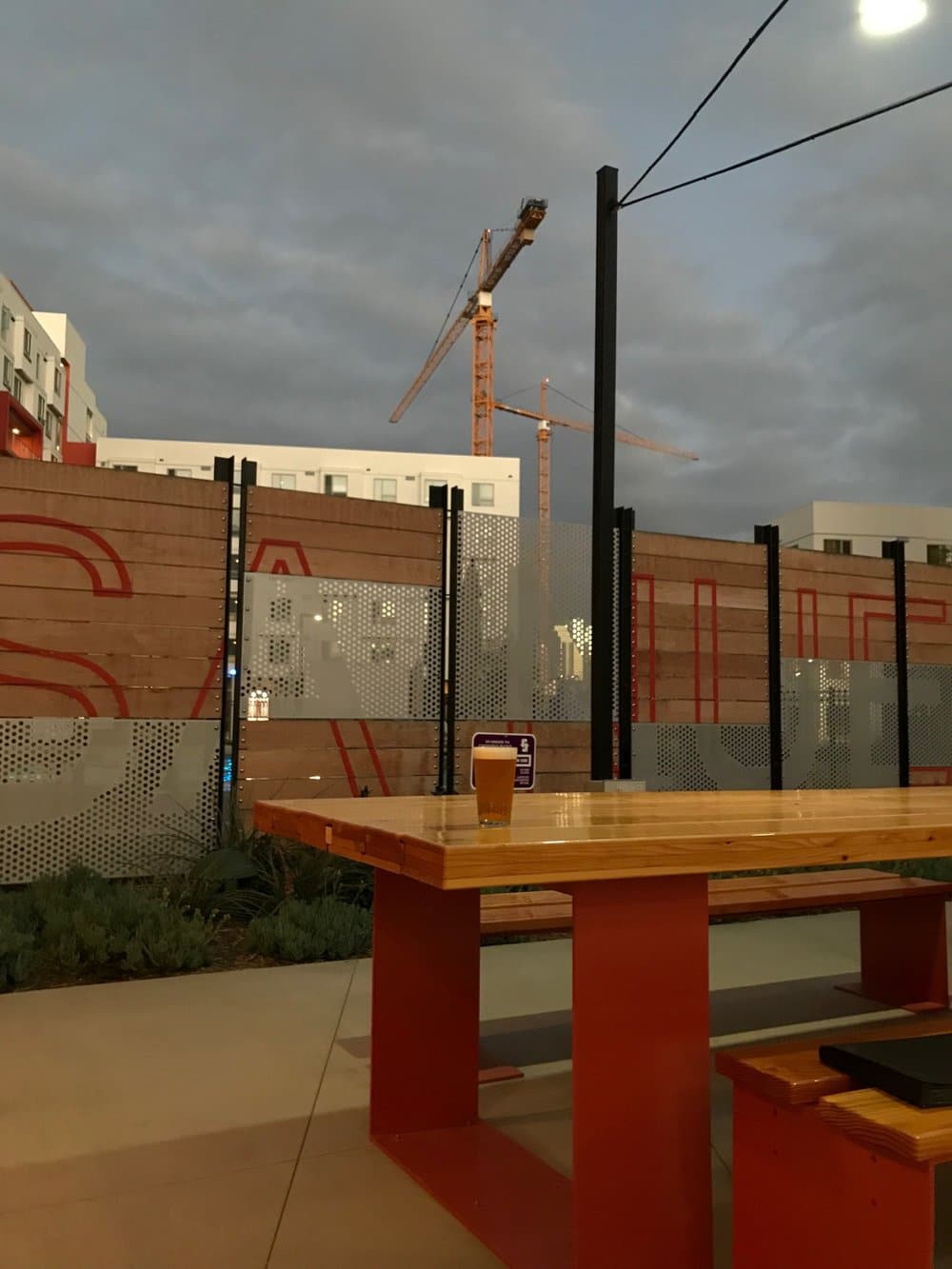 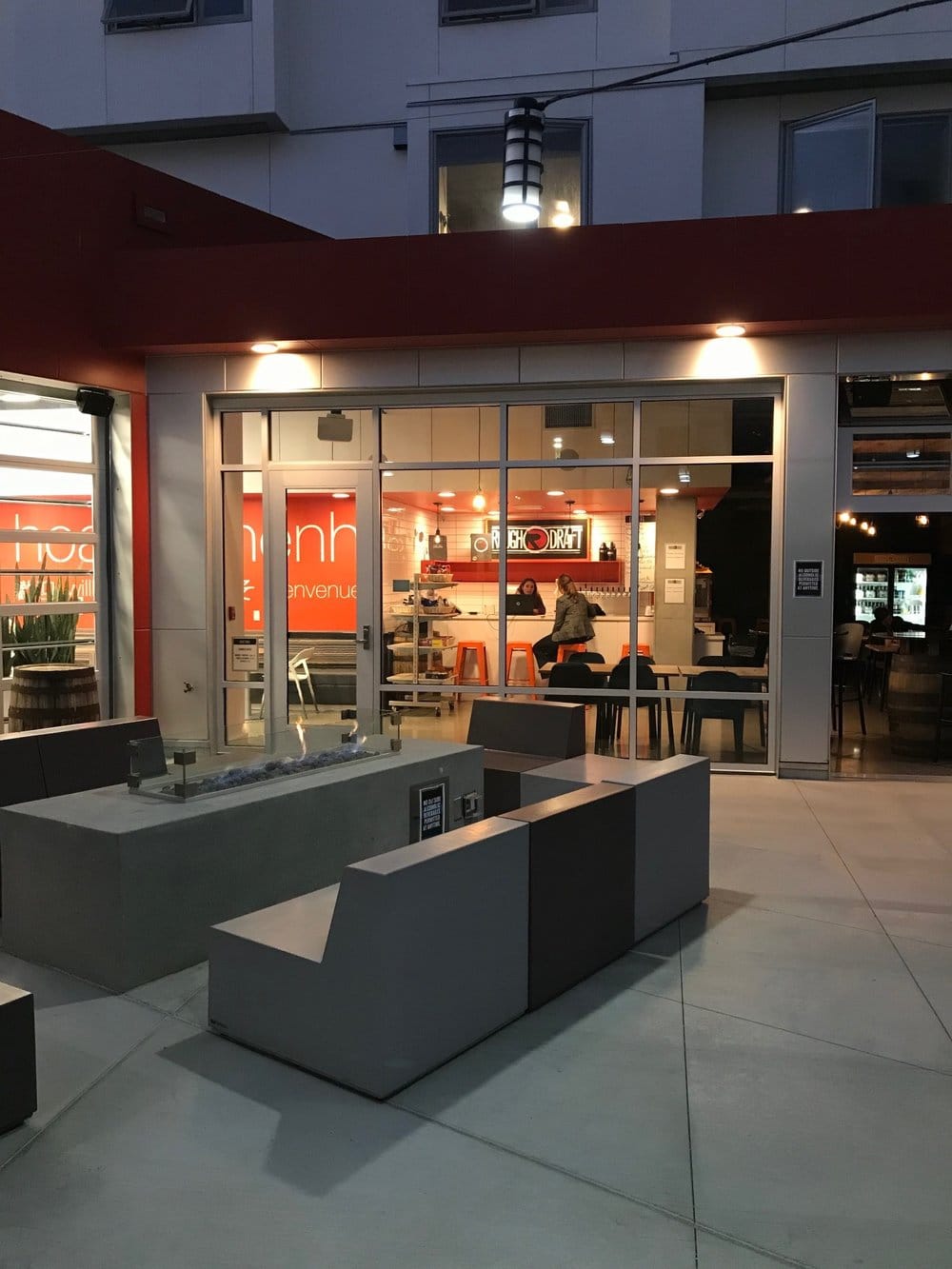 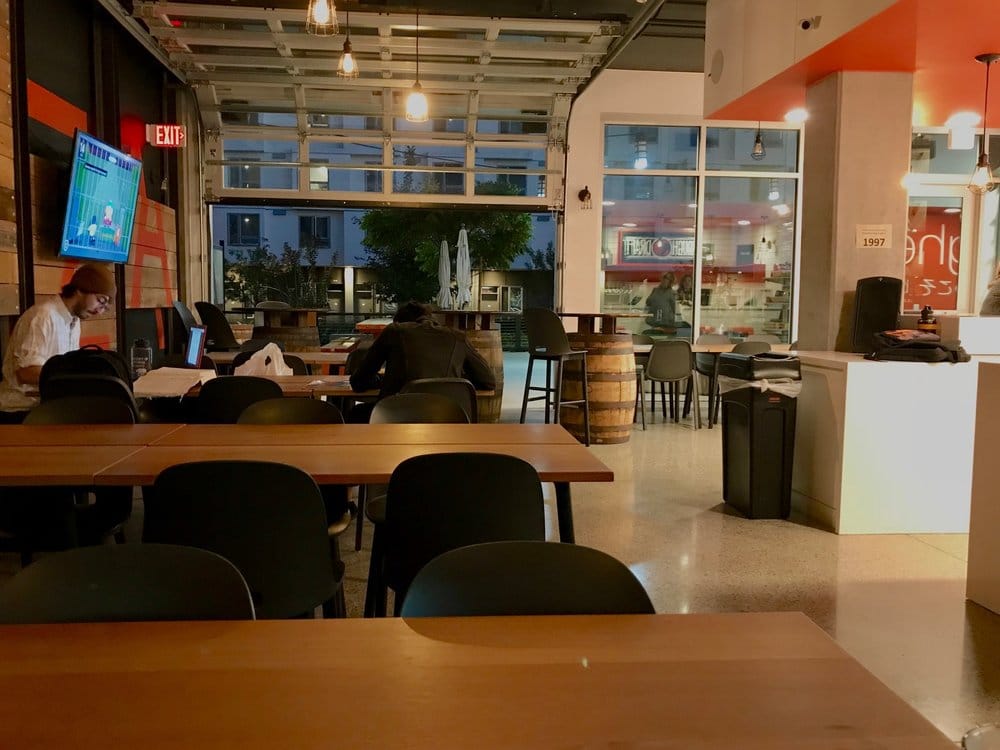 Students come here to study, to blow off steam after studying and, of course, to procrastinate from studying. I’ve heard the Thursday night trivia is popular and very competitive, as you would expect for UCSD grad students.

The beer menu seems to be a little less extensive than the main location (just twelve taps). Also unlike the original location, there is no kitchen on site. Service was good, though I had the feeling the bartender wasn’t used to serving people like me who are almost twice her age. They offer full pours, growlers to go and tasters, but there is no flight tray so plan accordingly. There are only a few seats at the bar.

The owner of Rough Draft is a graduate of UCSD who has maintained close ties to the university. He is super nice, and a great fit for this kind of project because of his love for the school and his affinity for graduate students. He makes an effort to get to know his customers, even challenging them to ping pong games.

Since graduate students tend to work late and/or to be night owls, the operating hours are good, open later than you typically find in San Diego tasting rooms: 11pm most nights, midnight on Fridays and Saturdays, and 9pm on Sundays. That comes with delayed opening times, though: 5:30pm most days, 5pm on Fridays and Saturdays. (Speaking from my time as a grad student, shifting to a 4pm opening might be good on Thursdays and Fridays!)

The first time I visited the UCSD Rough Draft tasting room was ten months ago, when the owner invited a friend of mine, who invited me, so on that visit my beer was free. But I would gladly pay for it: the beer is very good. Since it was a social occasion I didn’t log any of my beers in January, but I tried three things and liked them all, especially a porter I had at the end. I also didn’t take enough photos, so I realized I had to come back again. For some reason that took me nearly a year–which is especially strange since this tasting room is less than a mile from where I live. I think part of my delay was because Regents Pizzeria is on my way from home to Rough Draft UCSD, and Regents is one of my favorite places for craft beer–every time I thought about coming in this direction I went to Regents instead. Also, I tend to drink in the afternoon instead of the evening.

In any case, on my second visit the bartender told me her favorite is Eraser IPA (7% ABV), so I went with that. I had it about two years ago at PB Ale House and thought it was about a 3.5/5. This time I rated it slightly lower. That could be due to my much greater experience after two years of doing this blog, my learned dislike of earthy hops, or variations in the recipe over two years. But I think it is mainly because it was on nitro and nitro kills a lot of aromatics.

An earthy bitterness dominates even on nitro. The beer displays a nice cascade on pouring and there is a good and very persistent head as a result of the nitro, but even with nitro the mouthfeel felt thin. I picked up a tiny bit of piney/tropical on the palate but mostly there is no ‘there’ there. 3.25/5

Here’s something funny: This was going to be the last location on my brewery quest. When I arranged with my friend to visit in January of 2018, it was my 179th visit and the last brewery and tasting room in the county that I needed to get to. Then, the weekend before we went, two new breweries opened. The trend has only accelerated, it seems. I have just completed my 204th brewery/tasting room visit, and there are five more places on the list now that I need to get to. Which means San Diego has seen 30 new breweries and tasting rooms open in the last ten months. What a time to be a local craft beer lover! Drink up, San Diego.