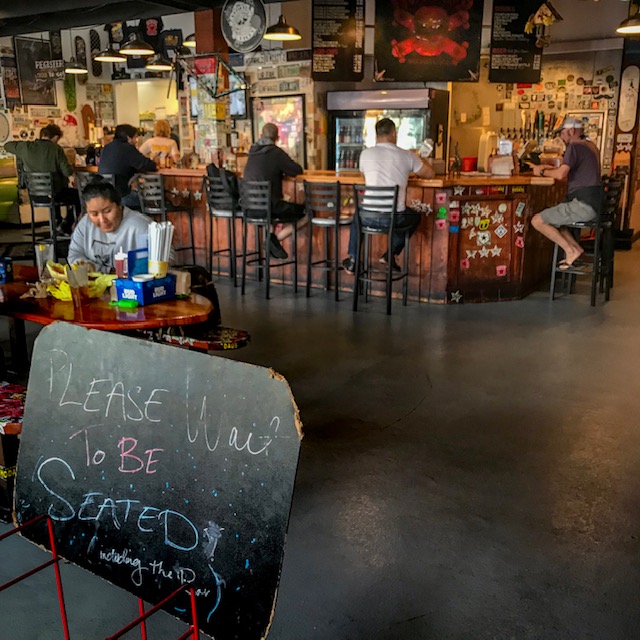 Did you know East Village is home to eight breweries and tasting rooms? That fact snuck up on me somehow. When Little Miss East Village opens soon across from Duck Foot, that will make it nine, and later next year when the Bay City tasting room opens around the corner from Knotty Brewing, that will be ten. That doesn’t include the 10 Barrel Brewing location since it is not craft beer. And maybe something will move into the old Monkey Paw space, too. I’ll post a neighborhood beer tour of East Village in a week or so.

Hodad’s is the latest entry into this group, and it’s a bit of an outlier–both because it is farther from the rest (its location barely counts as East Village) and because of what it is. Hodad’s is a small burger chain with locations in Ocean Beach and Downtown. The OB location was already locally famous when Guy Fieri visited for Diners, Drive-Ins and Dives. Guy definitely came for the “dive” part. The downtown location continues that theme with its bare concrete floor, sticker-covered walls, rough wooden tables and mismatched barstools. So how did Hodad’s make it onto this list? In November Hodad’s opened a brewery, and now they are serving four house beers at their two restaurant locations. The brewery itself, located in Serra Mesa, does not have a tasting room.

I had the pleasure of sampling the beer with Rob, Instagram’s @sdbeertour. Let me rephrase: I had the pleasure of hanging out with Rob, and we sampled Hodad’s beer. It is still the first batch out of the tanks, so I’ve broken my rule of not visiting early in a brewery’s existence, to give them time to get things dialed in. The beers are not dialed in. I didn’t hate them, but none of the four were ones I would pay to drink again in their current form. I do not usually like hefeweizens anyway, but there was a terrible barnyard aftertaste on this one that might have been due to dirty lines or an infected keg. The brown was pretty decent, the Kolsch was crisp and fruity but unexciting, the IPA was piney and crisp but had an extremely thin body.

They don’t offer flights at Hodad’s. I can’t blame them, I guess, since they normally have a line out the door for burgers and they are trying to turn tables. (That said, they do make milkshakes from ice cream, which surely take longer to make and serve than a flight of beer.) Our bartender kindly improvised a sample flight for us since it was not too busy when we were there, with the plastic disposable ramakins they normally use for BBQ sauce. Points for creativity and customer service. You could even say the result suits the theme of the place. After trying all four, Rob and I both ordered a full pour of the brown, which was served in my least-favorite drinking vessel, a Mason jar with a handle. 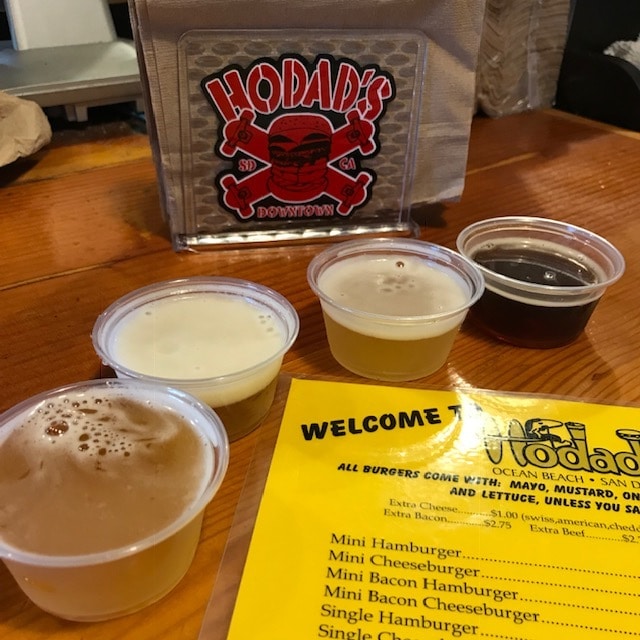 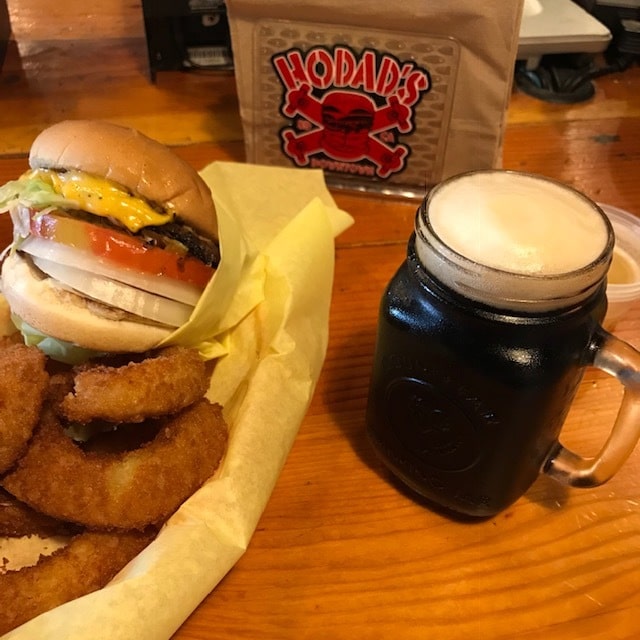 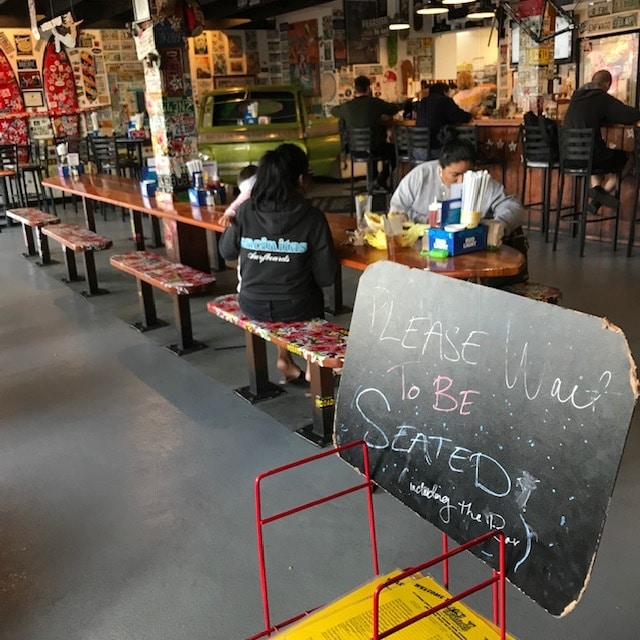 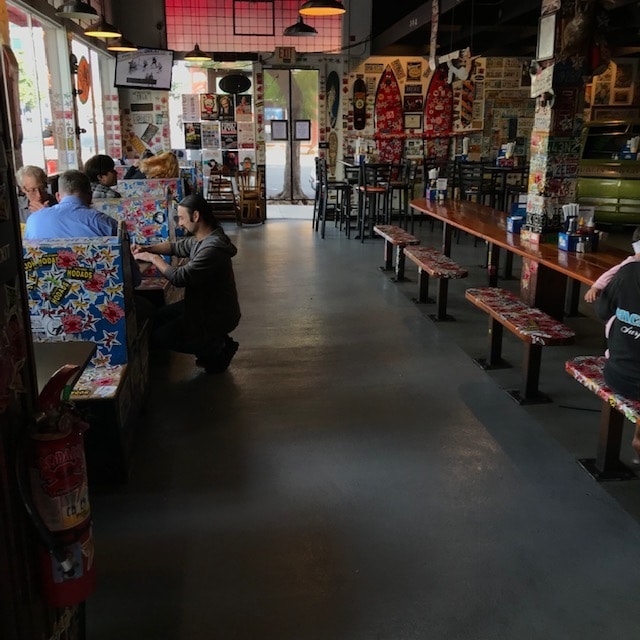 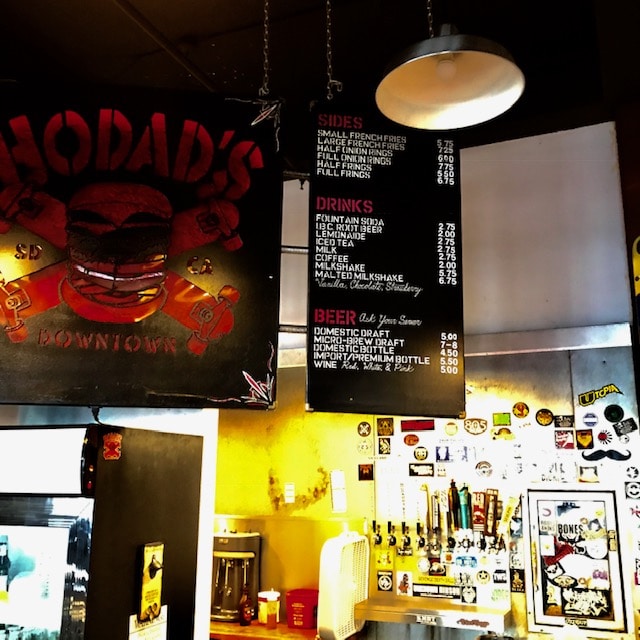 In addition to the house draft beer, Hodad’s offers wine (described on the menu as coming in red, white or pink), bottled beer, and eight other beers on tap. It was a weird tap list, in my opinion, but they must know their clientele: Stella, Bud Light, Firestone Walker 805, AleSmith .394, Karl Strauss Red Trolley, something from Black Plague, Ballast Point Sculpin, and one other I can’t make out in my photo.

One thing to know about Hodad’s is that their burgers are huge. I got a “mini” with onion rings and was still too full by the time I finished. Points for being a good base to lay down before an afternoon of drinking.

I’ll wait a few months before I hit the OB restaurant and will try the beers again then to see if they have improved. In the meantime, if you are in search of great San Diego craft beer, there are plenty of other places in East Village you’ll like a lot more. If you want a beer with your giant burger, this is one place to get it.