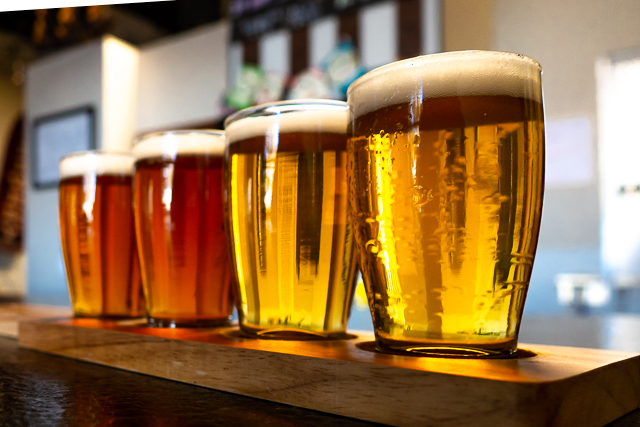 Embarcadero Brewing in National City is also a home brew supply shop. The friendliness and expertise of the staff makes this a great place to go drink beer while you talk about beer. And the beer is good, too. #sdbeer #craftbeer

I took a recent trip to the area south of downtown and dropped into both Embarcadero Brewing and Attitude Brewing, both recent arrivals on the south bay beer scene. My write-up on Attitude came out last week.

Embarcadero is not on the Embarcadero, but is instead (like most other breweries) in a light industrial area. The front is not well signed, so when they are open they put out the beer flags we have all gotten used to seeing outside breweries. Although the outside is unremarkable, it is quite nice inside. There is a comfortable bar with a handful of seats, some tables. The decoration is simple but good, and it includes a wall of brewing supplies. That’s because Embarcadero Brewing started out as a home brew supply shop and just recently added a brewery. That makes them like Home Brewing, Guadalupe Brewing and Bear Roots Brewing.

An important thing that Embarcadero shares with those other combo brewery/home brew shops is friendly and knowledgeable people behind the bar. I happened to be served by the owner/brewer, and he is enthusiastic about beer, brewing, serving people, teaching people about beer and talking about beer. Later some friends of his came in and sat near me at the bar, and I heard him excitedly describing future plans for recipes. It is always great to see someone who has knowledge and passion.

Speaking of sharing knowledge, the website says they are offering a “beginning brewing” class that starts on December 16, and it is just $20 to sign up. Sounds like a great opportunity for any budding home brewers out there.

One of the big plans at Embarcadero is to bust through the wall into the neighboring space. There, they’ll have more seating and will also re-establish their home brewing store so that it is bigger and carries more stuff (since they moved to the new space to start the brewery, they have less space for brewing supplies).

The location is a little off the beaten track but worth the trip. There is enough parking that it isn’t a hassle. Prices are reasonable, and the beers are good. I did a flight but didn’t get around to rating everything because I was chatting.

Embarcadero Pale Ale (5.5% ABV).  Well made. Clear golden, persistent head, balanced flavor. By style it’s a bit hoppier than a standard pale but it doesn’t go all the way to a “San Diego pale ale” that is nearly as hopped as an IPA. Quite good.  3.5/5

Embarcadero Brewing is just 2.3 miles across the Sweetwater River from Thr3e Punk Ales and the other beery goodness on Chula Vista’s 3rd Avenue. You could combine those two with Groundswell Brewing’s Chula Vista tasting room, and Chula Vista Brewery for a nice little south bay beer tour. Don’t forget Bay City Brewing, which is a bit farther south. And there is always Machete Beer House, Third Avenue Alehouse and Bar Sin Nombre to round things out.