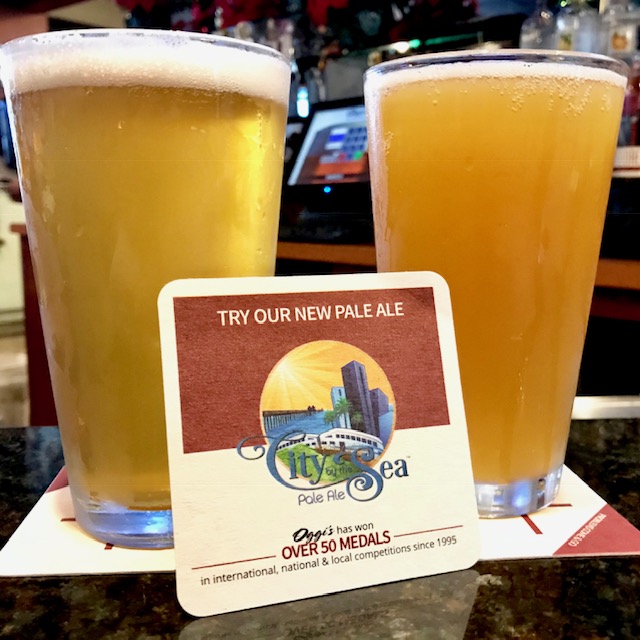 Oggi’s has two new beers, and they are pretty good. This is my first visit to the original, Del Mar, location.

Oggi’s invited me to come try out two new beers and some new food items. I choose the Del Mar Oggi’s location because I had never been there and because, of the eight Oggi’s locations in San Diego County, it is the one closest to my house. (Note that until recently it was nine SD locations: the Chula Vista restaurant closed this fall.)

The Del Mar location was where it all started, too, back in 1990. They’ve kept the location up to date. Although it is almost non-descript from the exterior, the interior is well done. There is plenty of seating and there’s a nice covered patio. The long curved bar was nearly full, and there were lots of customers throughout the restaurant, despite the deluge happening outside. Service was friendly, helpful and efficient given the volume they were dealing with. Everyone I spoke with was very nice. The manager has been there for sixteen years, and the server I spoke to has been there for three years — long tenures in the service industry are a sign of a happy and healthy business, in my experience. That showed, too, in the staff’s jovial conversations with the many regulars, and the fact that the staff referred to each other as family.

As I discovered when I went to Oggi’s Mission Valley, although Oggi’s got its start as a chain of brewpubs in San Diego in the 1990s and was an important part of launching the craft beer movement here, they don’t brew at their pubs anymore. Instead, the family that started Oggi’s launched Left Coast Brewing in San Clemente, where all the Oggi’s beer is now brewed. The only exception is the Carmel Ranch location, which brews some of its own beers. The Oggi’s website and printed materials in the restaurant don’t mention these facts about their brewing situation, but for transparency they probably should.

Oggi’s has won a slew of medals over the years — according to their website, 60 medals, which they say makes them one of the most decorated breweries in the world. Since the brewers, brewing systems and probably the recipes are all different than when they were winning medals regularly, it might seem a bit odd for them to pump up their history so much. As Janet Jackson said, what have you done for me lately? Well, one thing they’ve done pretty recently is that McGarvey’s Scottish Ale won gold at the 2017 LA International Beer Competition and silver at the 2017 Great American Beer Festival. Black Magic Stout won a gold at the 2016 LA International Beer Festival. So those are notable recent success. And now, for the first time in about a year, they are launching new beers. Here’s some of the the text from the press release:

These beers are being launched to coincide with the roll-out of some new food items this winter. Again from the press release:

The new food items are not yet available at the Del Mar location. That’s too bad, as I was really looking forward to the Bahn Mi. I tried two items from the extensive menu. The chicken lettuce wraps came in a huge portion that is sharable or would suffice as a meal. The lettuce was extremely fresh and it came with julienned carrots and crispy won tons. Overall it was good though slightly over-salted. I didn’t think the mustard sauce paired well with it so I stuck with the hoisin-like dip. Then I had a small fig/prosciutto/arugula pizza. It was also tasty and came on a thin crust. The ingredients were all good quality and it made a nice pairing with POG Project because the fig played well with the fruit in the beer. Oggi’s is not high-concept dining but the food I had was well prepared and satisfying. It compares favorably with, say, Pizza Port‘s food.

My first thoughts on the new beers are that they are good additions to the line up. I’m not sure they’ll win any awards in their current formulations, but brewers refine recipes over time and so these could be even better in a few months.

POG Project (Blonde Ale, 4.5% ABV). Opaque and cloudy orange/brown color because of added fruit purée. Passion fruit and guava flavor with a hint of orange (not overly bitter as is too often true with blood orange). Medium mouthfeel. Hop bite on the end with a clean finish. This is tasty and would make a refreshing summer beach beer. 3.5/5

Easy Obsession (Session IPA, 4.5% ABV). A nice session IPA. It has a piney/floral nose with a similar flavor profile that also has citrus and stone fruit notes. Bitterness and sharp carbonation gives a crisp finish that lingers but not unpleasantly. The bitterness is not overpowering. Although the description says it has grapefruit flavors, I didn’t really get that. 3.5/5

I appreciate that Oggi’s has several lower-ABV beers on their list. It is something I wish more breweries would do. When I drink, I want to be able to enjoy several beers.

Many Oggi’s locations offer a good guest tap list in addition to their ten house beers, mostly made up of local craft and non-craft beers. The question then always becomes, why drink the house beer if the guest beer is so good? The Del Mar Oggi’s avoids this dilemma by only offering two non-Oggi’s taps: Alpine and Coors.