Excellent mead and excellent cider under one roof in the “ethanol-topia” that is the Miralani Makers District of Miramar. #beeramar #craftbeer #craftmead #craftcider #cider #mead #sdbeer

When I went to Thunderhawk Alements to do my review last year, I noticed that Serpentine would be opening more or less next door. I later learned that Lost Cause Meadery and a small food company are sharing the space. The whole shebang opened for business near the end of 2017.

It is an interesting business arrangement, with Serpentine as the main tenant and the others as sublessors within the Cidery.

From the customer’s point of view everything feels very integrated, and the companies appear to work together seamlessly. For example, owners from the cidery and the meadery switch off days running both sets of taps, and they treat both equally. 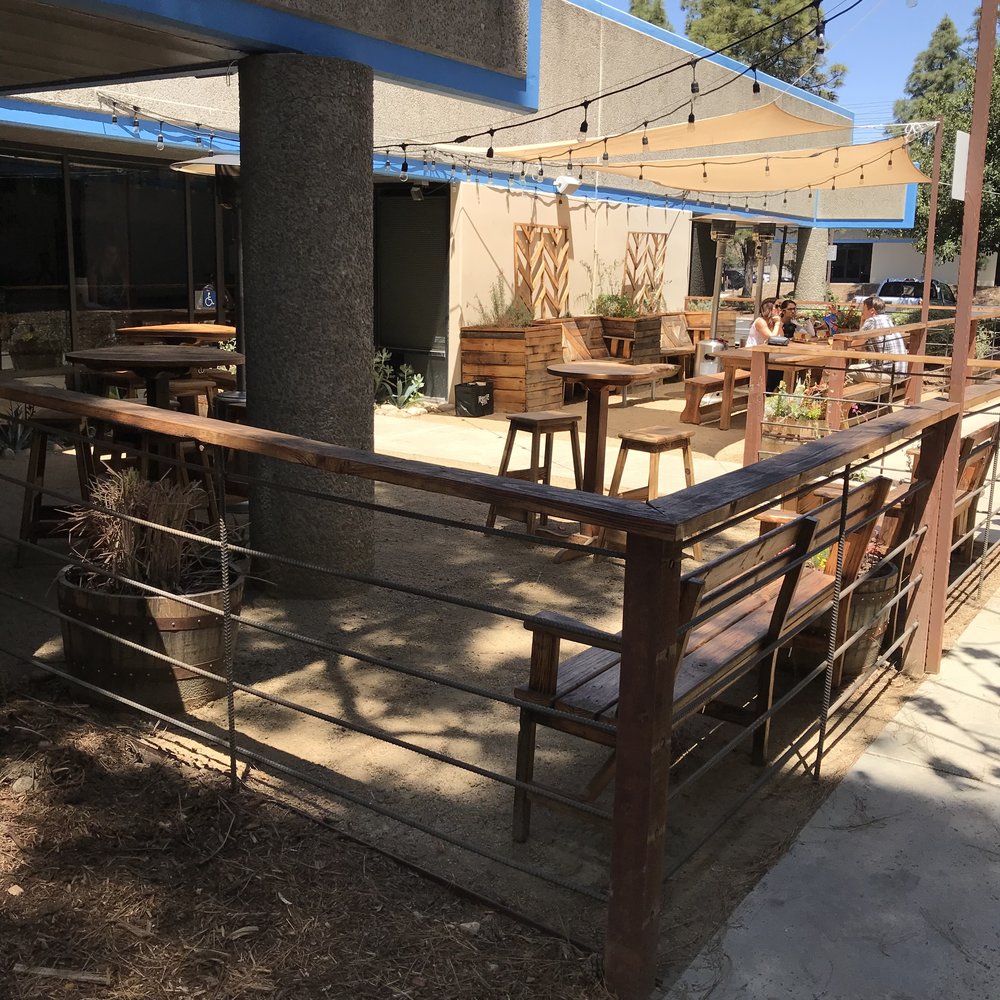 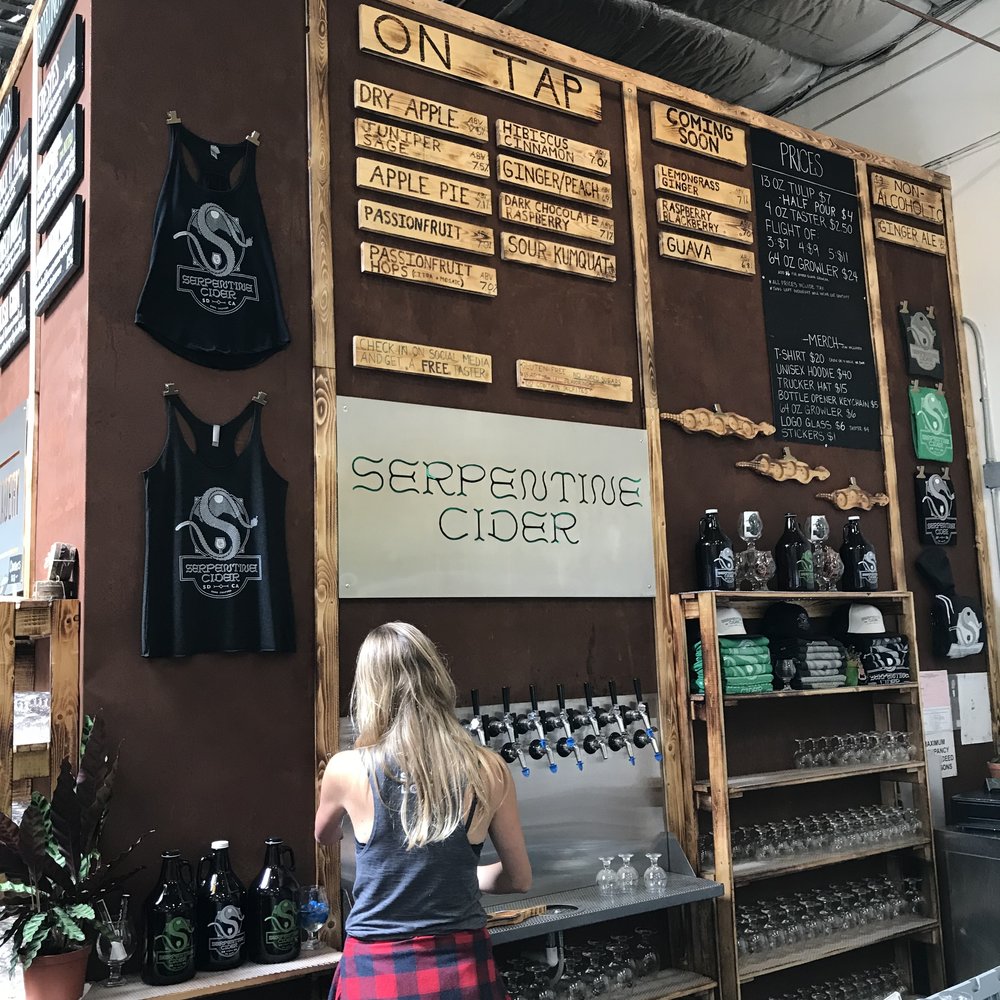 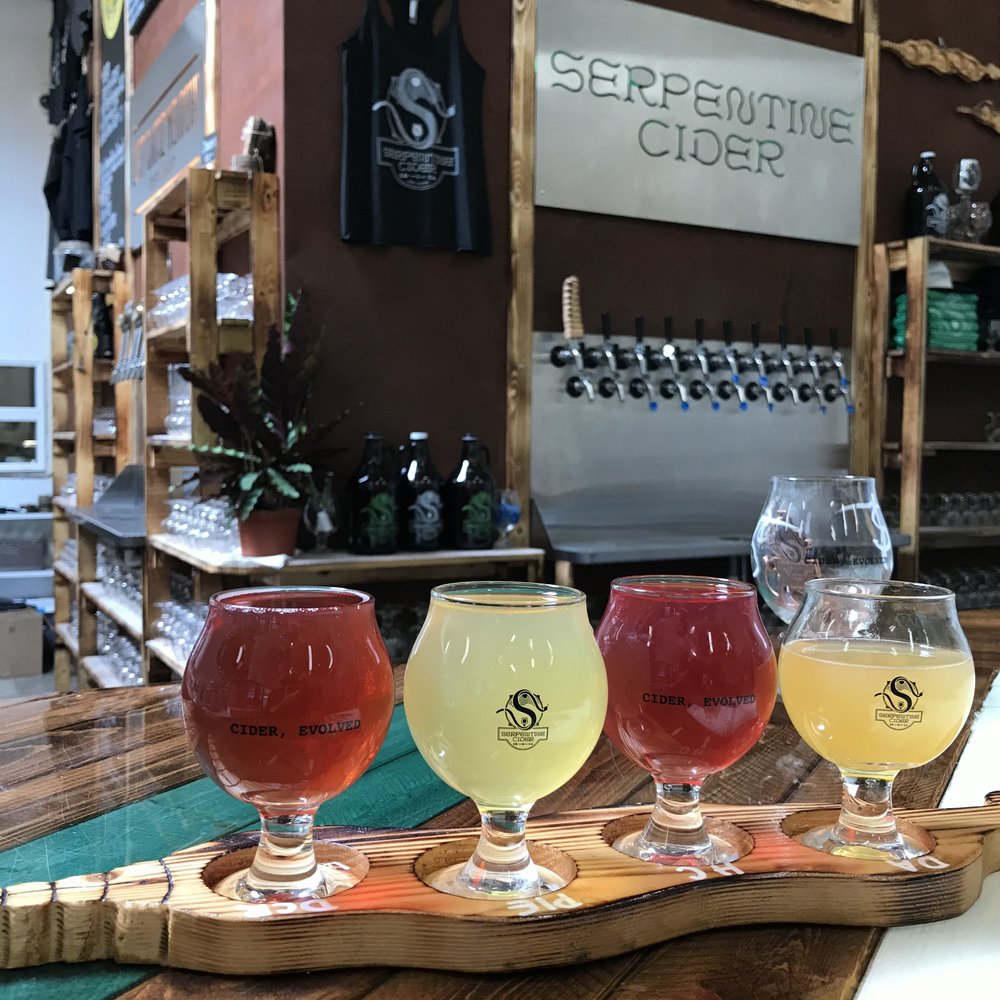 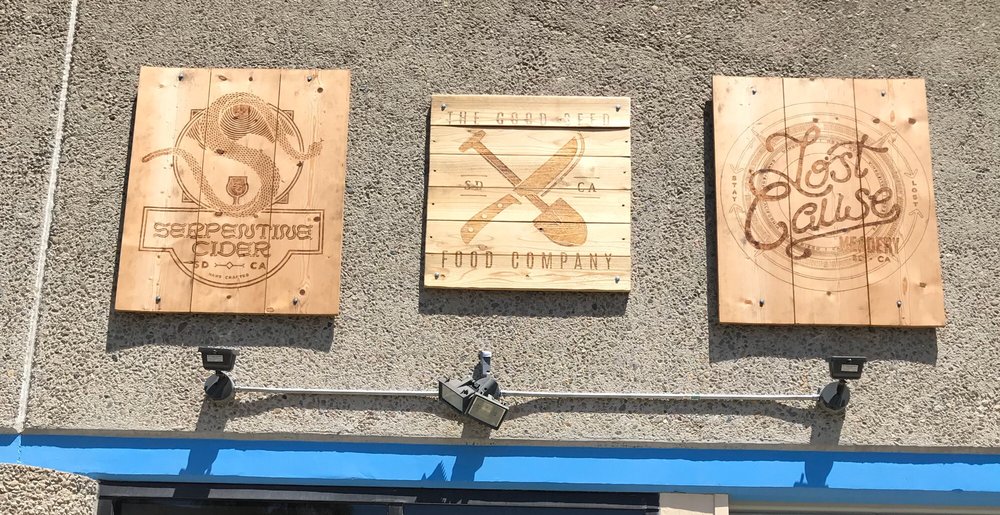 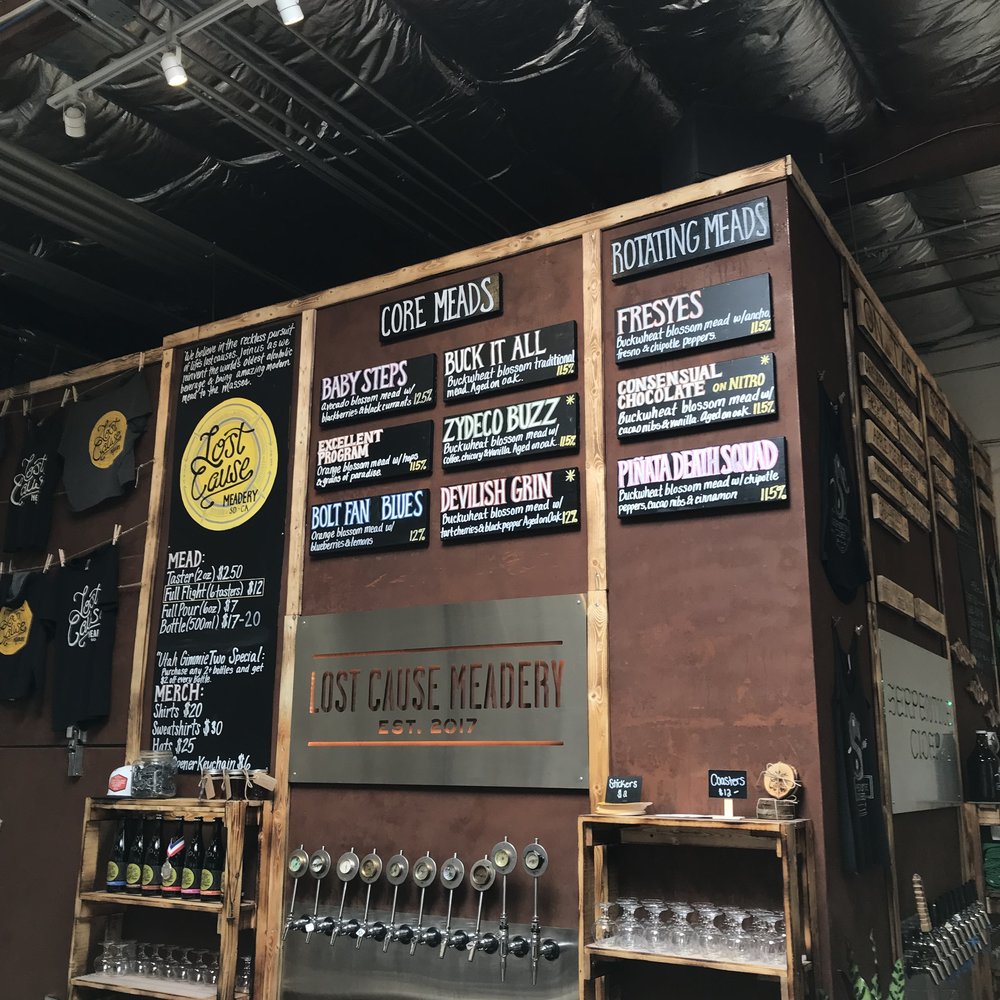 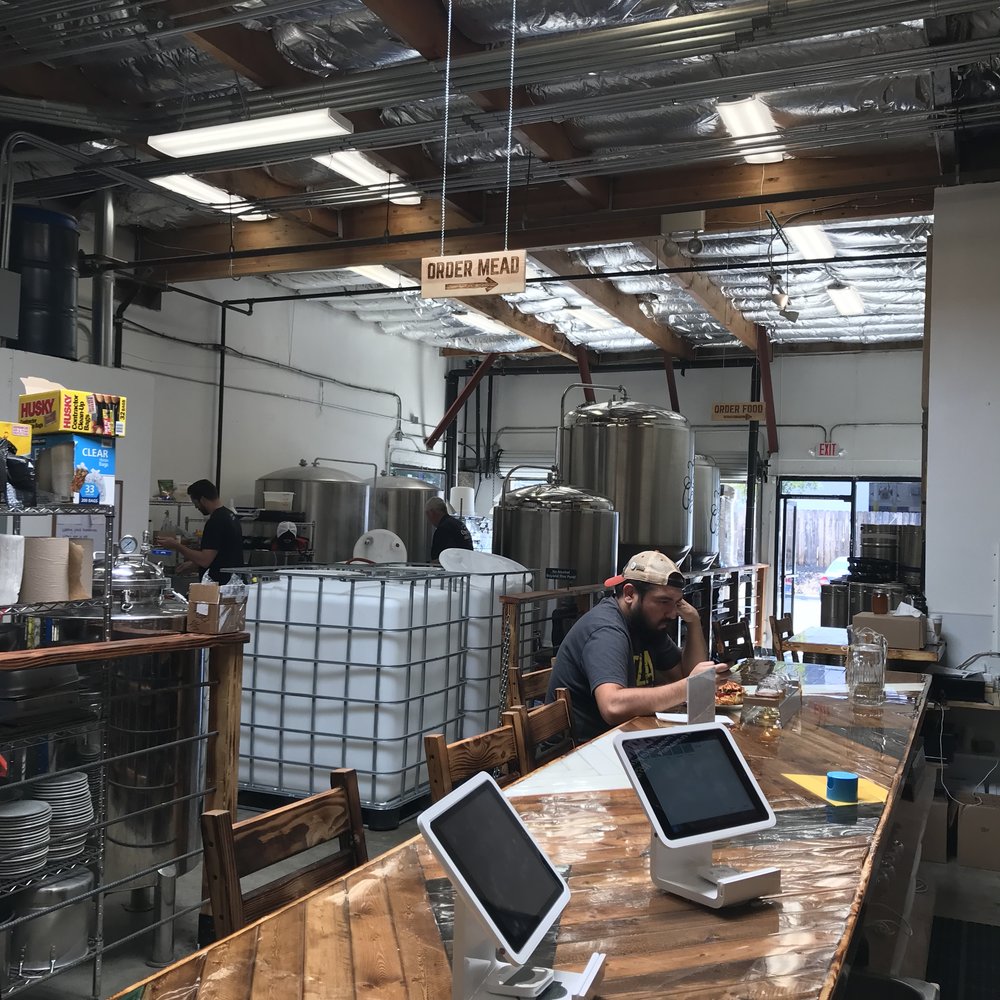 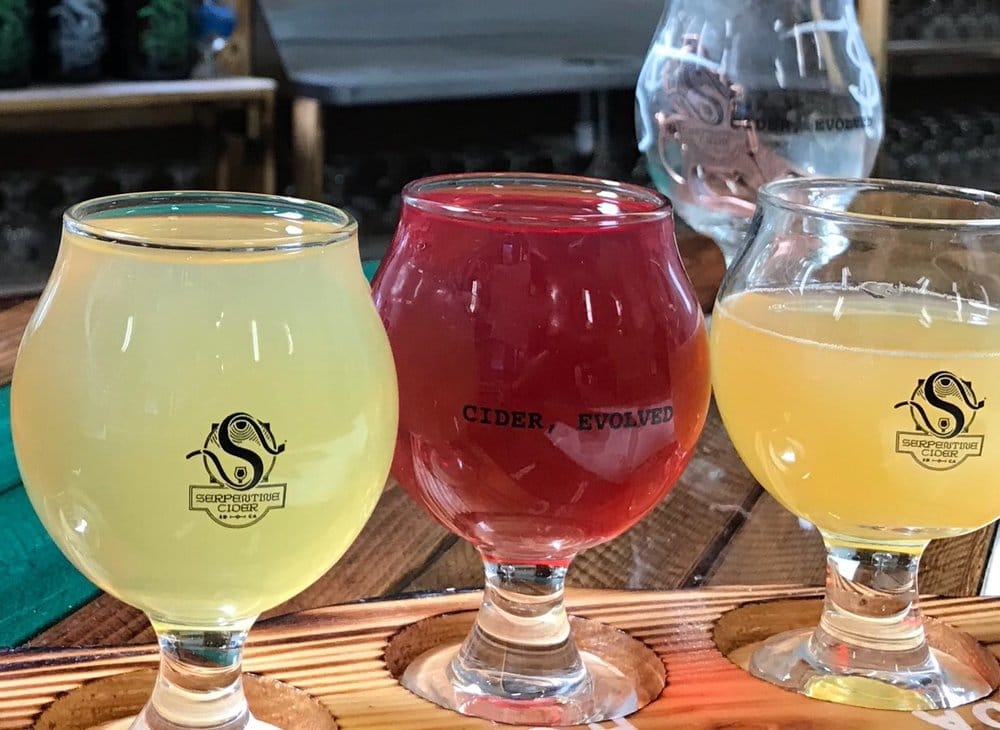 The cider and the mead are on neighboring legs of the L-shaped bar; their respective tanks are barely an arms-length apart from each other on each side of the production area. All three businesses share an excellent patio with a cool sunshade and some trees. The interior is a mix of well-done “tasting room rough woods” and a slightly-more-cluttered-than-usual production/storage area. The kitchen is visible only through a couple of small windows in an area next to the bar, kind of like a food truck.

I don’t have a lot of experience with either cider or mead, so I won’t try to rate or rank what I drank. But boy-o was there some tasty stuff on tap. Whether you are usually a craft beer drinker, a wine drinker or a cocktail drinker, you will enjoy this place. In fact, I met a guy at the bar who has given up craft beer and now only drinks craft cider. Suzanna was an excellent guide for both tap lists, providing plenty of information about each pour, and giving me the background on the place, its businesses, its production methods, and its people. I noticed that every single customer who came in got the same excellent treatment, even when she was busy with cleaning and odd jobs around the space.

Suzanna was such a good rep that I ended up having a flight of cider and a flight of mead. They are interestingly different from each other (apples vs. honey, of course), and both companies make both straight-ahead and “out there” versions of their libations. (If I understood correctly, all the ciders are developed from the same base, which is pretty interesting given how different they are from one another.) All of it was well made, and I enjoyed everything I tried. Some of it was excellent, even: there are a few things I tried that I would put up against the top rank of beers I’ve had in terms of taste, complexity, balance, and enjoyment. Serpentine’s Hibiscus Cinnamon Cider and Lost Cause’s Bolt Fan Blues (a “melomel,” a fruit mead with orange blossoms, blueberries and lemon) were the two standouts for me.

Lost Cause recently won a silver medal for their brew called Devilish Grin at the Mazer Cup International Mead Competition. As Brandon Hernandez put it in WestCoaster, that’s the mead-equivalent of medaling at the World Beer Cup–i.e., it is super-impressive. Especially for a business that has only been fully open for less than six months. But for years now, owners (and spouses) Billy and Suzanna Beltz have been medaling in homebrew mead competitions. (Or should that be “meadaling”? That pun is “gold”: I want credit if they use it for a mead name!) They even have previous wins on the homebrew side of the Mazer Cup. So, their success is built on hard work and lots of practice in addition to talent. Check out the profile of Mr. and Mrs. Beltz from SDVoyager, a neat magazine I stumbled across while preparing this post.

The Miralani “Makers’ District” has been home to quite a collection of craft beverage companies for awhile. In addition to craft beer from Thunderhawk Alements, Align Brewing, Protector Brewery and 2Kids Brewing, this small corner of Miramar is also home to Setting Sun Sake, Swinford Spirits, plus Charlie & Echo urban winery, and now Serpentine Cidery and Lost Cause Meadery. (Unfortunately India Street Winery closed down.) All that is within about a 250 foot radius near the intersection of Miralani Dr and Camino Ruiz, which is truly remarkable. Go another 0.6 mile and you’ll find Montesquieu Winery or Mikkeller Brewing. Of course, that’s all included in “Beeramar”, the stretch north of Miramar Road that runs from roughly the 15 towards the west for 3.25 miles that has an incredible density of craft beer–no fewer than 20 breweries and tasting rooms, not to mention several other craft beverages makers. #ilovesandiego

My First Attempt at Homebrewing Cider