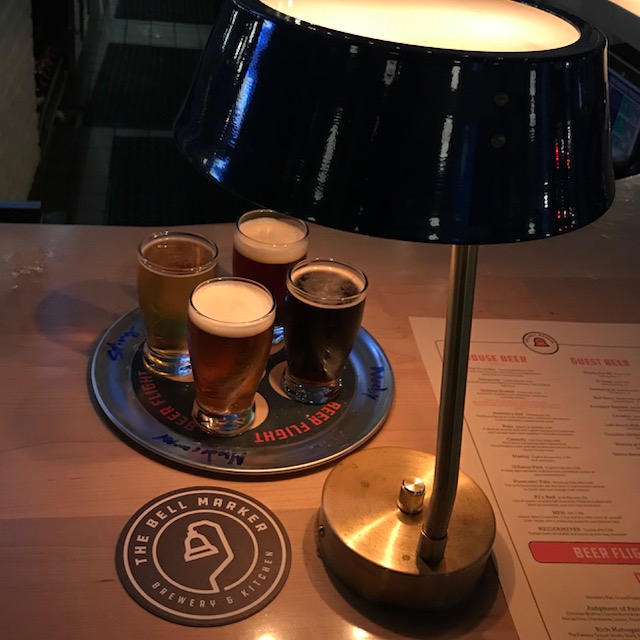 [Note added March 2019: Bell Marker the restaurant has closed and a new operation has taken over, called Owl Drug after the original occupants of the building. Bell Marker the brewery still operates in their part of the space and sells their beer at the location. The arrangement is similar now to how Resident Brewing is co-located with The Local restaurant. In late 2019 it became clear the Bell Marker name had been dropped.]

I went to The Bell Marker to meet Joel from Twitter’s @brewerytravels. He is in town for a few months and is trying to hit as many breweries as he can. And he is hitting it pretty hard! If you see him around, be sure to buy him a beer.

The Bell Marker occupies the space formerly held by The Beer Co. I had never been to it before. The renovation has made it a beautiful space. There is a lot of white subway tile (plus a tile version of the logo) on the walls, a grey tile floor, and a coppery-blond wood bar top with little lamps in it. Pretty fancy. The interior is large, and because of its downtown location it was quite busy. It is a restaurant first, but they do a good job with the house-made beer, too, in addition to having a good guest tap list that includes several good local options.

The large bar has plenty of seating; even though it is large, the two bartenders I saw did a good job of getting to everyone in a reasonable time. They were friendly and gave each patron focused attention even though they were busy. If you ask me, that’s the right way to do it.

They were pouring twelve house beers on my visit. One thing that surprised me about the list was how “middle of the road” it seemed. There are no “out there” beers with weird additives, nor even any extreme styles. For context, there were several pale ales, a couple of not-over-the-top IPAs,  a brown, a stout, a red, a blonde, a hefeweizen, etc.—and only one DIPA. That’s pretty unusual in a San Diego brewery! But it makes sense for the kind of place they are: A restaurant first, one that caters to local business clients and the tourist market, not necessarily the beer geek market.

Everything that I tried was quite good: very well  made, true to style, with no flaws, and tasty. Rojo (red ale), Stingaree (English blonde ale), and Maebe (a brown, and yes that is the correct spelling) were all solid, in my opinion 3.75/5 for each. That is remarkable consistency, which is a good sign about the skill of the brewers. (Expected, since they are both ex-Pizza Port folks.) I also tried Niedemeyer (the DIPA) I but forgot to make notes on it since by then Joel and I were deep in beer conversation.

If you are looking for solid, drinkable beers in a casual but sophisticated environment, this could be the place for you.