My other hobby, in addition to craft beer, is sailing. I’ve been crewing on a boat out of Coronado Keys for Wednesday evening races. Since traffic is so bad at rush hour, I’ve been heading south early; it has been a great opportunity to catch some breweries and do the whole “two birds, one stone” thing. Last week I visited Chula Vista Brewery. A few weeks ago it was Bay Bridge Brewing (after a Saturday race–Bay Bridge isn’t open on Wednesdays). This week it was Novo Brazil and 3 Punk Ales. All of them are good, though they are all very different from one another.

By coincidence the brewer at Novo Brazil, Eduardo Pentagna, found my Instagram account (@CraftBeerIn_SD) last week, so when I dropped in he generously gave me some of his time and guided me on a little tour of the facility. They were canning Ipanema (an IPA); that was interesting to watch. I saw the brew tanks in operation. And of course I experienced the tasting room. The space is large and well put together, with a degree of polish and sophistication not always present in warehouse-based breweries and tap rooms. They went to pains to make things look good inside and outside the building. And I love a toucan mascot (maybe it is good associations from Saturday morning cartoon cereal ads.) By the way, I had never been out to eastern Chula Vista before–I thought it was a nice area. 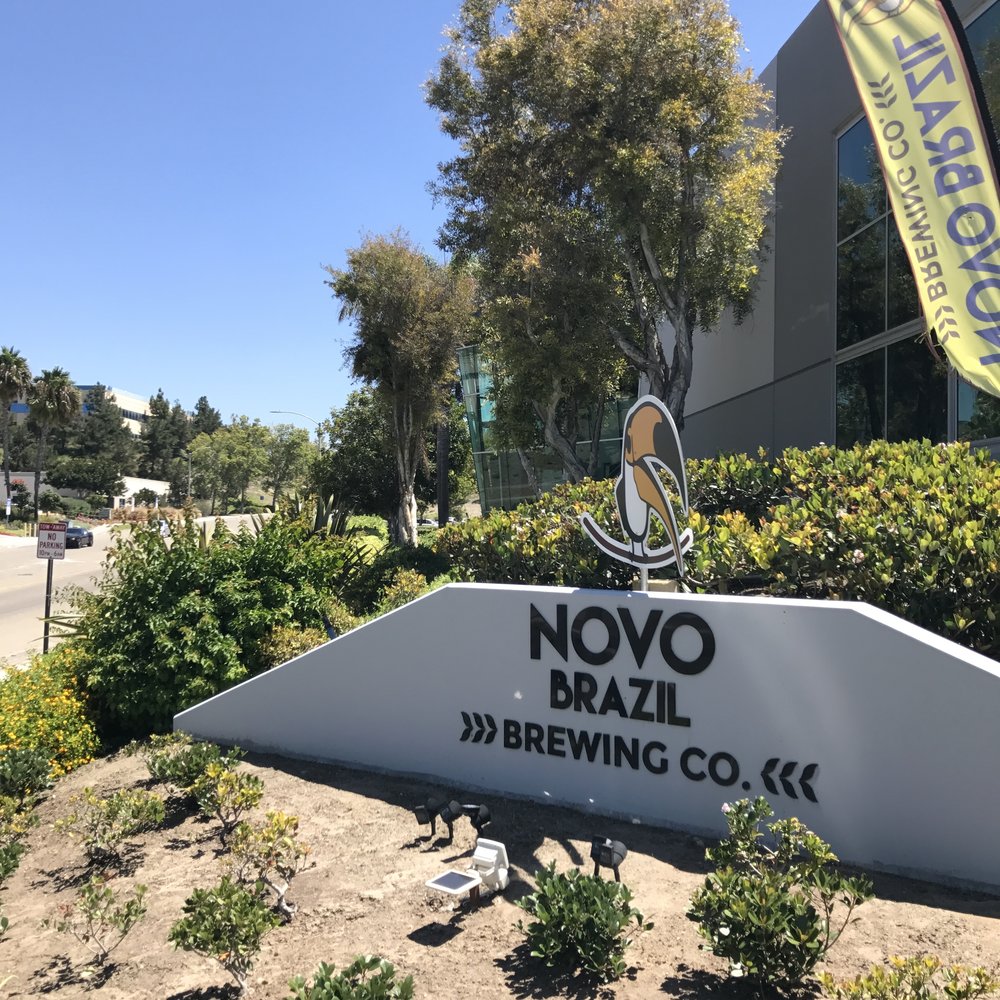 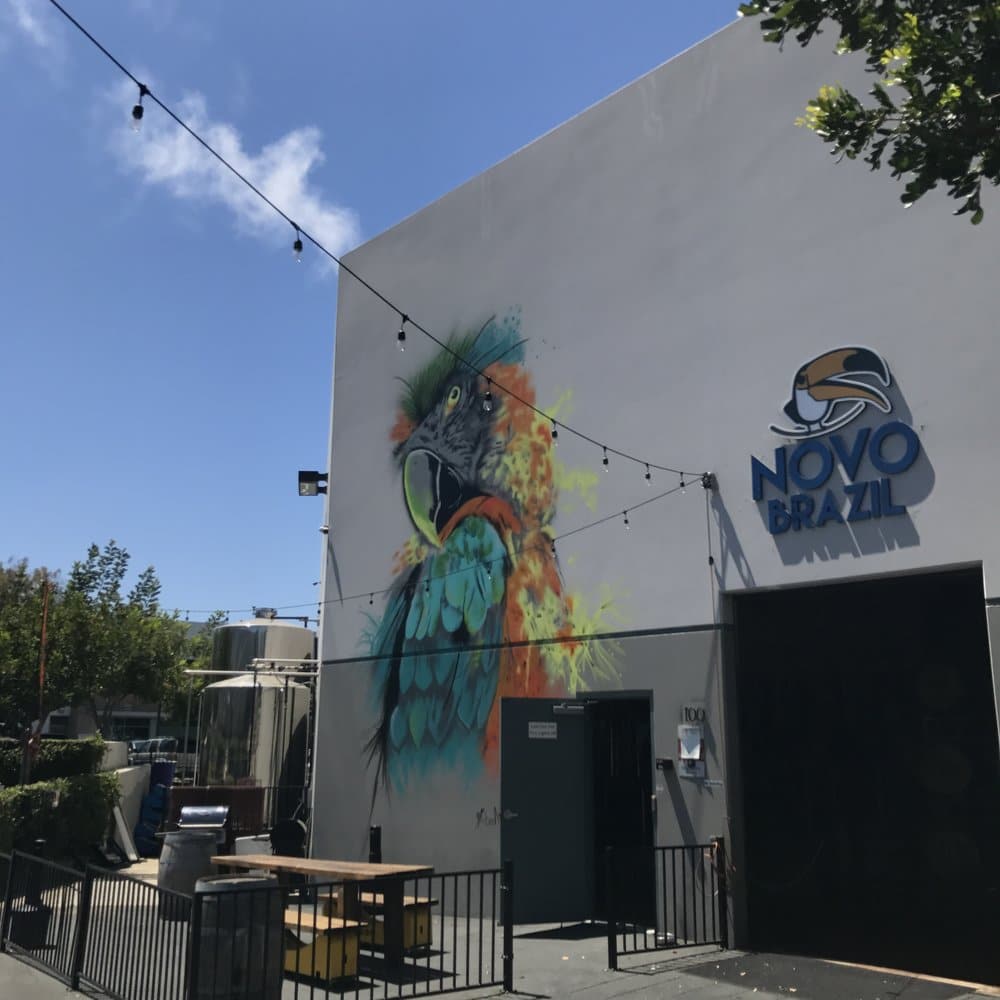 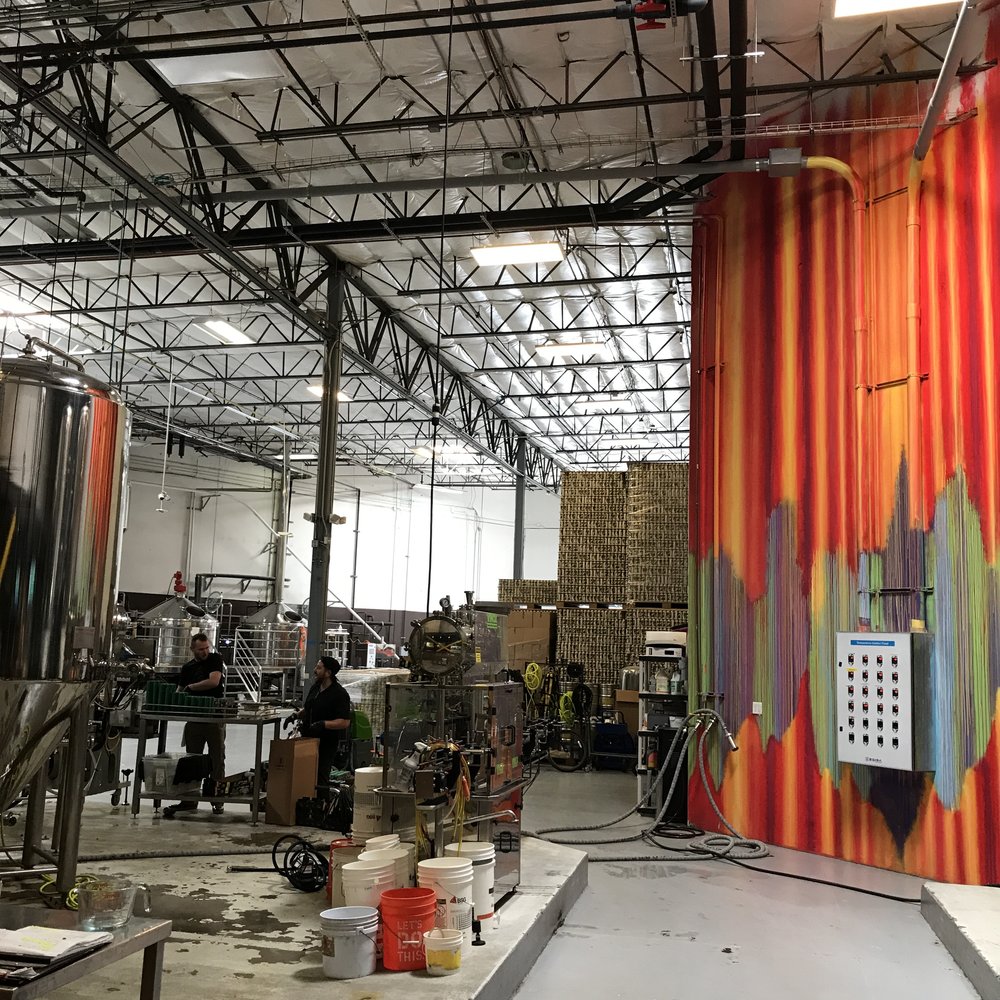 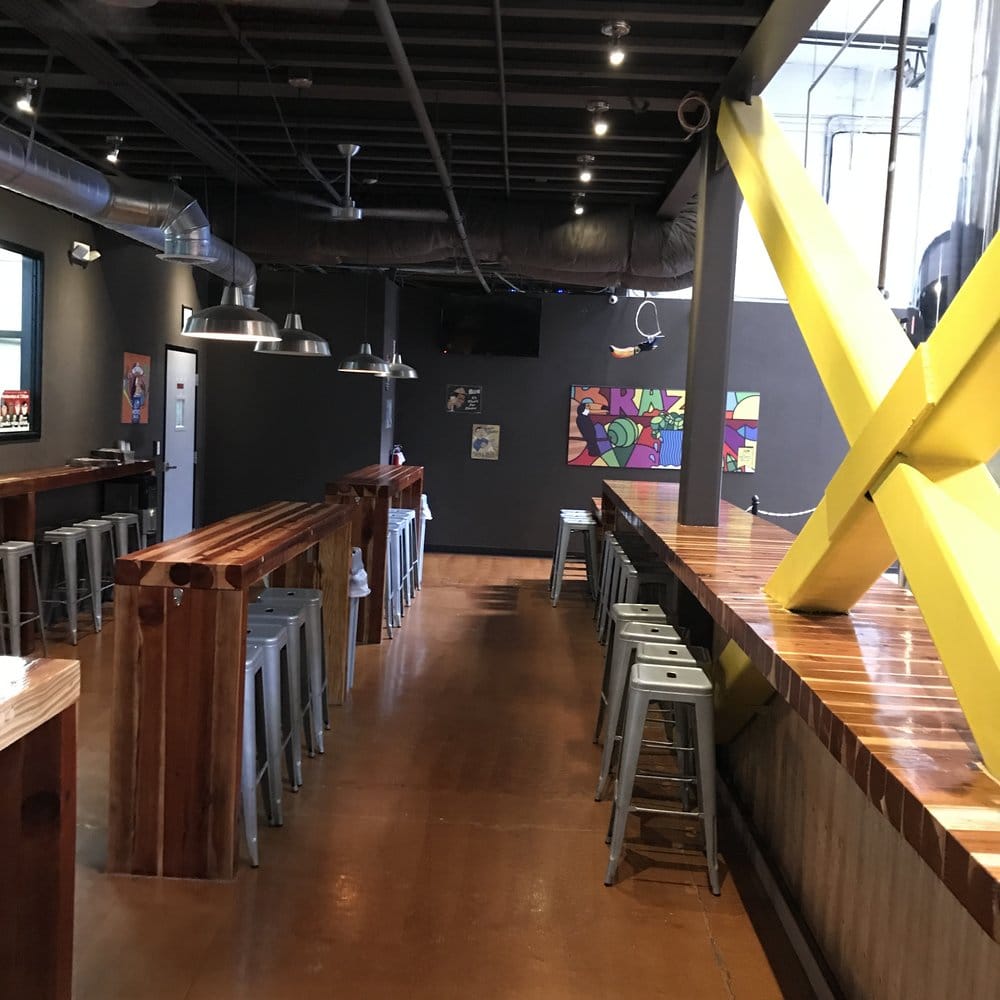 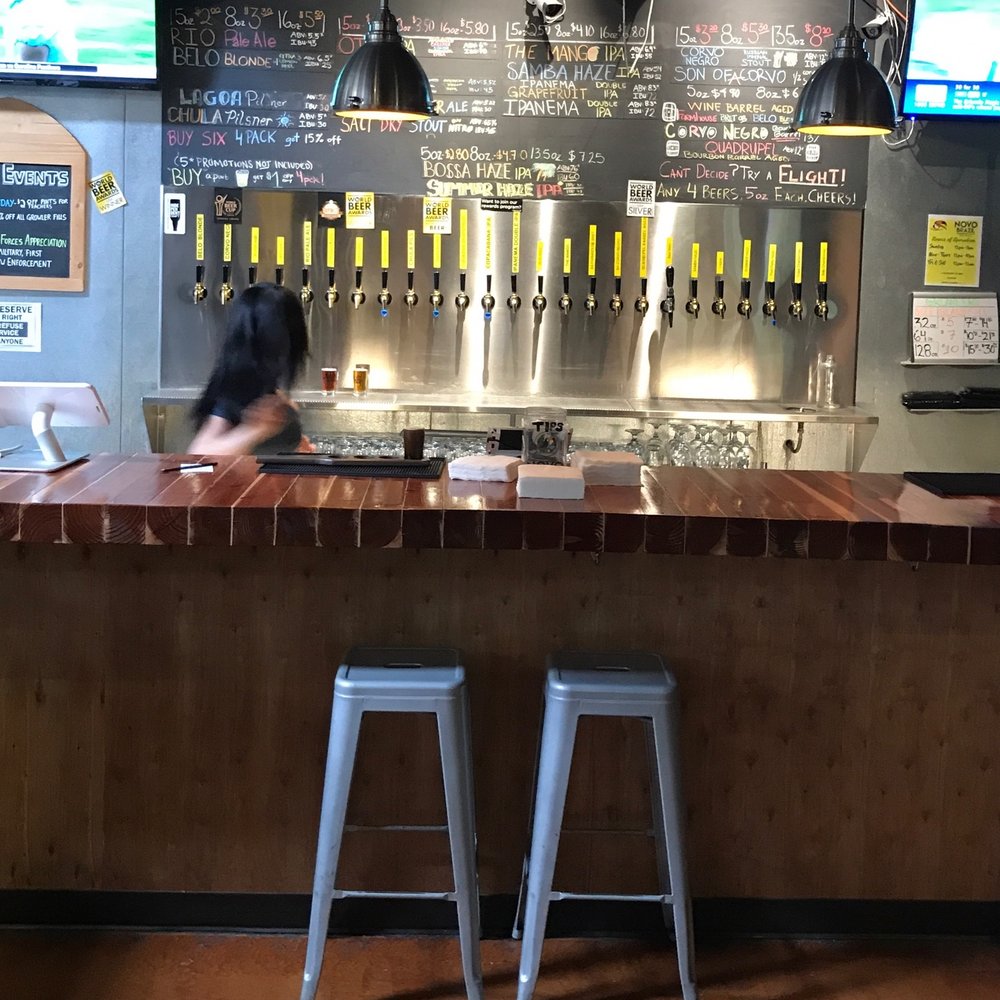 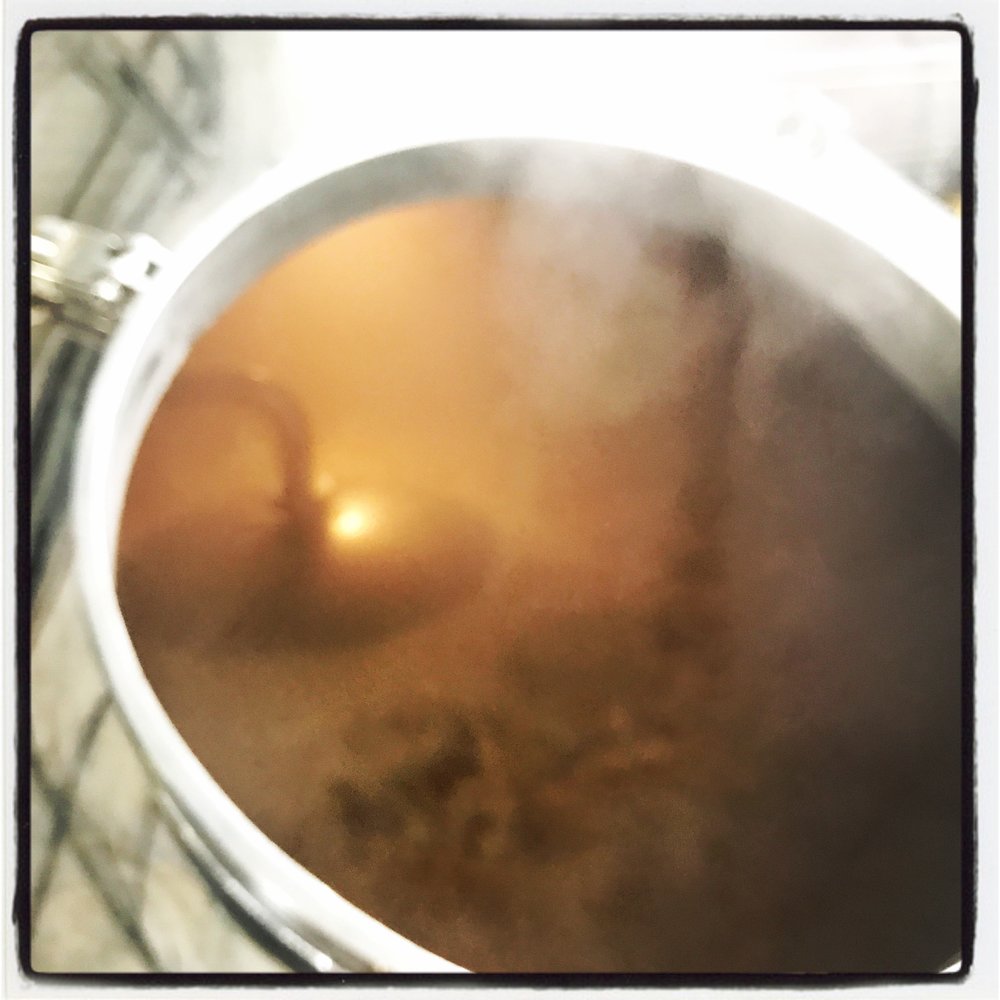 In addition to the flight I bought, Eduardo and the beertender gave me samples of several other beers. There was nothing I disliked, and several I tried that were very good. All of it was well made. Novo Brazil has won several awards at various beer competitions over the last couple of years.

Ipanema (Double IPA, 8.6% ABV). This is a very good DIPA off the tap; Eduardo also gave me a taste directly off the tank of a new batch on which he had tweaked the recipe. It was ridiculously fresh, of course, but I think the new recipe is even better than the already very popular old version.  3.75/5

Mulata (Red Ale, 5.2% ABV). This not a traditional red (to me, it tasted thinner, earthier, and lacked the edge of spice that I associate with reds) but it is tasty and drinkable. (Descriptions and ratings on Untappd seem variable–I’m not sure if that is the difference between draft and cans, different batches, or different raters.)  3.25/5

Wine Barrel Aged Brett (Chardonnay barrel aged IPA with brettanomyces yeast). This is not something I would have ordered on my own, but it was really interesting and I was glad to have gotten a sample. Chardonnay is an unusual choice for a barrel, but it really works with this malt/hop profile and the yeast choice. There is a sour note (stronger on the nose than the palate, I found), medium mouthfeel, light carbonation, and in the background a touch of wine oxidation. The aging knocked down the hops in the IPA, of course, but there was still a slight bitterness on the finish that rounded things out nicely. it was refreshing and would make a great summer afternoon beer, especially if you are into sours. There is a related farmhouse/saison on the menu that is similarly good.  3.75/5

Saci (Dry Irish Stout, 6.6% ABV). An unusually thin/light stout. Not my preference but there’s nothing bad about it.  3/5

Corvo Negro (Russian Imperial Stout, 12% ABV). Balanced and sweet with an alcohol bite; notes of coffee, chocolate and roasted malts. The fumes are delicious even on the third breath. There is a barrel-aged version I wish I had tried.  4/5

The tasting room is comfortable and has plenty of seating. There is a small patio outside, as well. The service was excellent and the beertender really knows her beers. Novo Brazil has various weekly specials and events; check their website for the latest information. Pro Tip: If you need an oil change and you also want to try the “two birds, one stone” thing, drop your car down the block at the Castrol place then take the short walk to the brewery for a flight while you wait. If the brewery seems like it is too far away, the good news is that you can find Novo Brazil in cans.