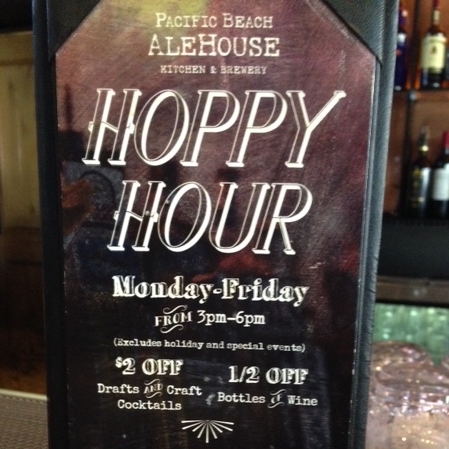 Pacific Beach AleHouse is a brew pub about 200 yards from the beach. Its a nice spot, but the house beer is “okay” rather than “good.”

Located near the very popular Pacific Beach, the PB Ale House is a brew pub and restaurant. Their brewing operation (housed just around the corner from the pub) is supplemented with a good tap list of guest beers, a full bar and an extensive menu. $2 off drafts and cocktails for “Hoppy Hour.”

Law Street Lager (session beer, 4% ABV).  This was drinkable but unremarkable. Yes, you could drink several, but why? If you want Bud, drink that; if you want craft beer, try something different.  2.5/5

The bartender and the rest of the staff were good: friendly, competent. The interior is clean, well-designed and comfortable. There’s a pleasant outdoor patio. Being 200 yards from the beach is nice except that parking in the area is not easy. If you have already parked and have enjoyed the beach for a while, this would be a great place to stop in for a cool one and a meal out of the sun. There are plenty of TVs, too, for sporting events. (On the day of my visit it was Olympic synchronized swimming, which may be the strangest “sport” in the world.)

Slomo Saison (4.5% ABV).  This is most definitely a Belgian style beer–very forward yeast flavors. The rest, however, tastes thin.  3/5

I wanted a snack and ended up with a very disappointing cheese flatbread from the “Hoppy Hour” menu ($9): The crust was very plain and it was also a bit under-cooked. The mozzarella, parmesan, tomato sauce and fresh basil were individually decent-to-good quality but somehow didn’t meld together in a pleasing way. I don’t mean to be too harsh, but I’ve had some better frozen pizzas.

Kate Session IPA (4.8% ABV).  This is what beer ABV used to be, standard, before craft brewers started hitting us over the head with the high alcohol beers that led to the recent movement to make more session beers.  It is smooth, very drinkable, but not exciting.  It is not very hoppy, which perhaps defeats the expectation that a craft IPA should have some bite.  3.25/5

I happened to sit next to a guy who moved to San Diego right when the craft beer movement was getting started here, and he’s been following it closely the whole time.  He explained that the management recently changed at PB Ale House, and there is a new brewer.  By his account, the new guy hasn’t yet gotten to the level the previous brewer had established for PB Ale House, so it isn’t as good as it was.  (The old brewer moved to Colorado to brew there, he told me.)  It was a bit intimidating to be sitting next to someone who is a beer and San Diego craft beer expert when I was doing just my second tasting on my quest.

Rockfish Red (6.5% ABV). Mmmm. This one is good. Notes of coffee, almost a porter taste with a slightly sharp finish. This would be my regular pint if I drank here often.  4/5

Soledad Stout (7.2% ABV).  It has a thin start with more developed smoky, coffee and chocolate flavors toward the middle and end.  To me, it tastes more like a porter than a stout, and it didn’t have the head you expect in a stout.  3.5/5

Overall, this place is worth coming to if you are already nearby for some other reason; I wouldn’t make a special trip just for this. All five of the house beers I tried were “okay,” not quite rising to the level of “good”. A common theme was that they all were a bit thin, lacking depth. None was offensive by any means, but I wouldn’t seek them out. The Rockfish Red was my favorite. PB Ale House has a quite good guest tap list, and so things like Alpine Duet (which I had at the end of my visit on my seat mate’s recommendation) vastly outshone their own offerings. It strikes me that there is little point in going to the trouble of brewing your own beer if it doesn’t rise to the level of good, especially if you serve much better guest beers. Now, I understand that it takes a while to dial things in (I’m sure that will be the case with this blog, for example!), so I’ll check back with this brew pub and update my evaluation in a few months. I live pretty close anyway. Quality control, though, should be their first priority: if the batch is no good, dump it out, don’t try to sell it anyway!

I also review on Yelp: <https://www.yelp.com/biz/pacific-beach-alehouse-san-diego>