How Many Breweries in San Diego? August 2019 Edition 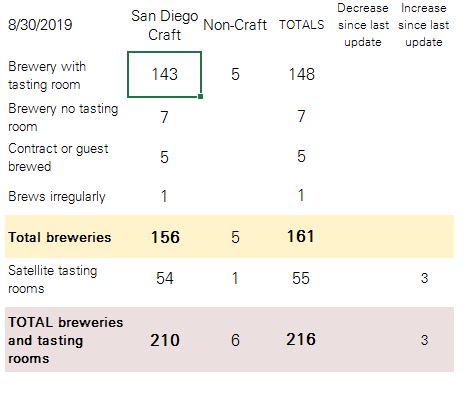 Here is THE LIST of breweries and tasting rooms, in a conveniently sortable spreadsheet.

Pure Project’s first tasting room, Pure at the Park in Banker’s Hill, had their grand opening on the weekend of August 2.

Modern Times’ latest tasting room is The Invigatorium. In East Village, co-located with a few other food and beverage companies, this location’s focus is MT coffee, but several beers are on tap, too.

As far as I can remember, this is the first time since I started this monthly update that there were no announcements of new breweries in planning. Don’t worry, there are still plenty on the way. See below.

2Kids Brewing, part of the Miralani Makers District, announced in mid-August on social media that after failed lease negotiations they will be closing permanently after their sixth anniversary celebration at the end of September. A few months ago, the same landlord [Can someone please send me the name?] made it impossible for Align Brewing to sell their business, scuttling a family dream to move to Hawaii. The landlord was part of the issue in Benchmark Brewing’s closure, too (Fenton, in that case). And several Brewery Igniter tenants (also Fenton) have told me that their rent is so high relative to the capacity of the pre-installed brewing systems that it is extremely difficult to brew enough to save enough to move out, even though that’s what the Igniter is supposed to be for. (Rawley frrom Rouleur Brewing most recently detailed this situation for me. Rouleur has since announced a 15 month plan to move out and build a brewery of their own by fall 2020.)

According to an announcement in West Coaster, URGE Oceanside will be closing down its whiskey bank/bar/second brewery for house brand Mason Ale Works. This coincides with opening a new instance of the eatertainment venue URGE Common House, this new one to be opened in Temecula. Mason Ale Works recently expanded brewing capacity at the San Marcos URGE Common House, so the brewing equipment at Oceanside will no longer be needed.

A recent post on AmericanCraftBeer.com summarizes the mid-2019 data on national brewery density. It is an interesting analysis, though it does not account for volume of production sold out of state (which increases the dollars-per-capita for states like Colorado), tourists who help drink the beer, etc. For comparison, while San Diego has 5.2 breweries per capita, nine entire states, let alone cities within those states, have higher brewery density than that. California is only at 2.6 breweries per capita. There’s still plenty of room for growth.

That doesn’t mean everything is universally rosy: some breweries are finding it difficult to compete, as Ian Anderson reported in San Diego Reader.

Fresh off opening their Oceanside tasting room in summer 2019, Kilowatt Brewing will open a second “speakeasy” space adjoining their current Kearny Mesa brewery. It will serve tiki-themed drinks as well as beers. The whole thing is a temporary affair since Kilowatt will need to relocate soon: The strip mall they are in is due to be demolished in fall 2020.

A project announced almost two years ago, Kno Beverage House, now simply Beverage House, is still in progress despite having originally planned to open more than a year ago. However, I recently received email confirmation that this place will serve craft beer but will not have a brewery of its own—the person who wrote to me said he wasn’t sure how everyone got that idea. I’m pretty sure it was this, which says Santa Ana’s Cismontane Brewery (part of the ownership) will brew some of its beers in Escondido. That, apparently, was either a misconception or a plan that didn’t come to fruition. The upshot is (-1) to the In Planning List.

My current estimate, then, is that there is a high chance that four or five new breweries will open before the end of 2019, and six to nine new tasting rooms.