Their OB satellite tasting room is more polished, but the beer is still great at Helm’s Kearny Mesa brewing facility.

<Helm’s sold to Two Roots Brewing, who closed this tasting room but maintain the one in Ocean Beach. This site is now just a production brewery, with a focus on making beers with marijuana additives.>

I was the lone customer on an early Friday afternoon at the Kearny Mesa brewing facility, a warehouse space in a commercial center (what a surprise) nicely “decked” out with ship’s wheels, navigational lights, posters of ships, and other maritime-themed paraphernalia. The long space is open fore and aft (to use the applicable nautical terms) with parking “berths” on both sides. The light and air coming from the two ends of the room makes for a pleasant atmosphere. The bartender was friendly and helpful, though once I ordered my flight and I “dropped anchor” at a table near one doorway so I could take some pictures, he headed off to clean some brewing equipment. By his account, I had beaten the crowd by a couple of hours and the place would fill up around 5pm once people got off work. That suited my mood, actually, and I enjoyed sitting alone at the rough table, reading through the new edition of the San Diego Brewer’s Guild Map and entering my beer ratings on Untappd. (Though I did find several things wrong with the SDBG map, as I explain here.) 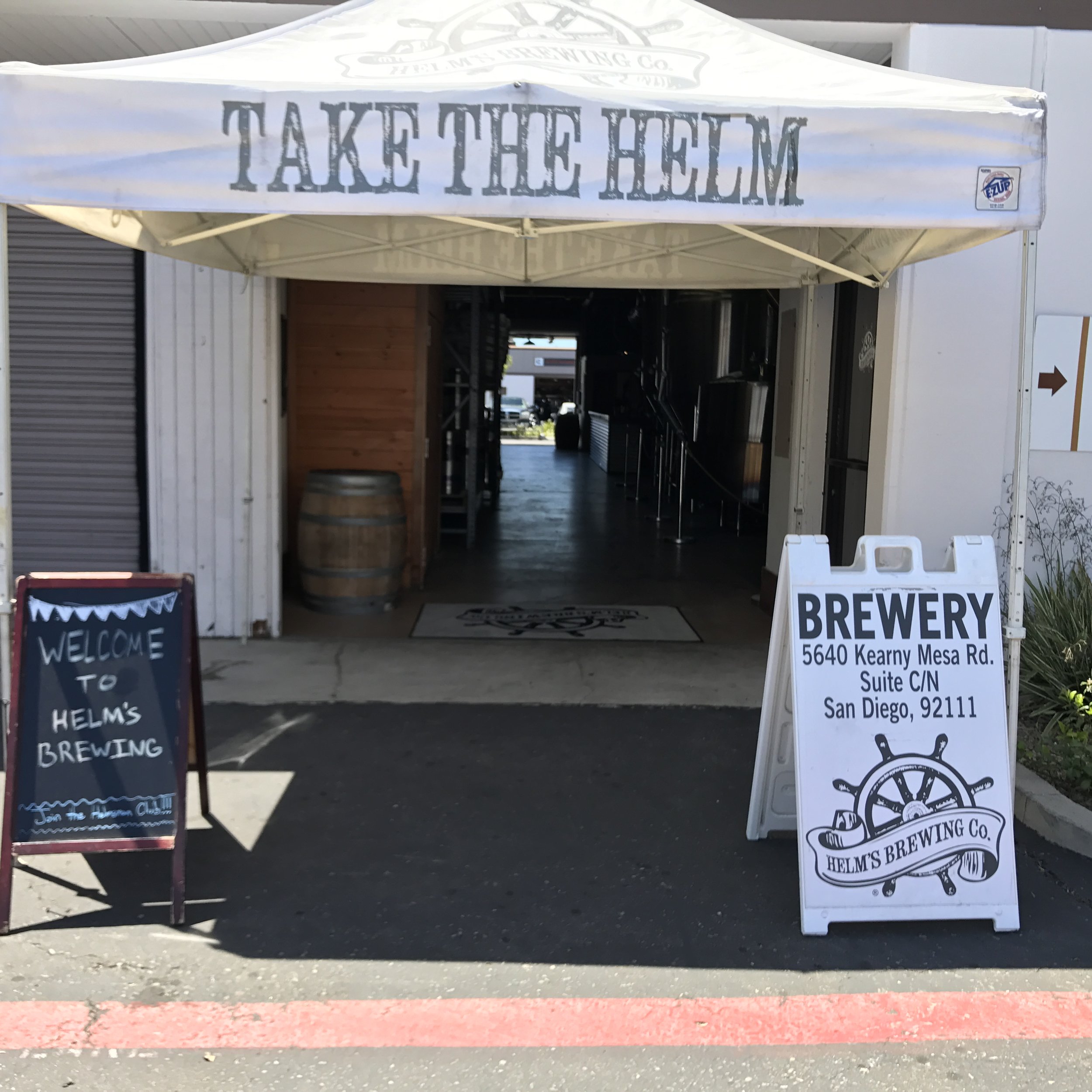 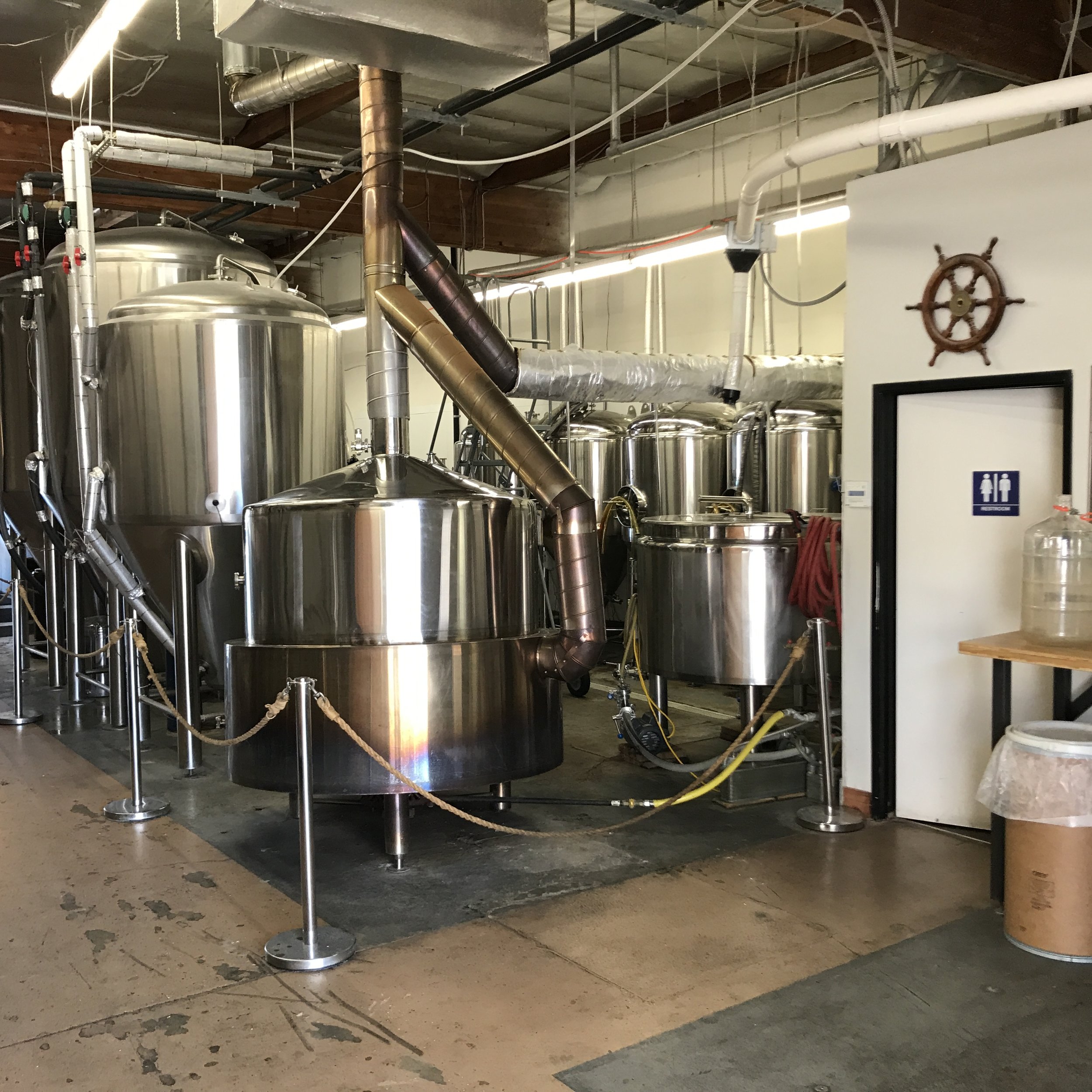 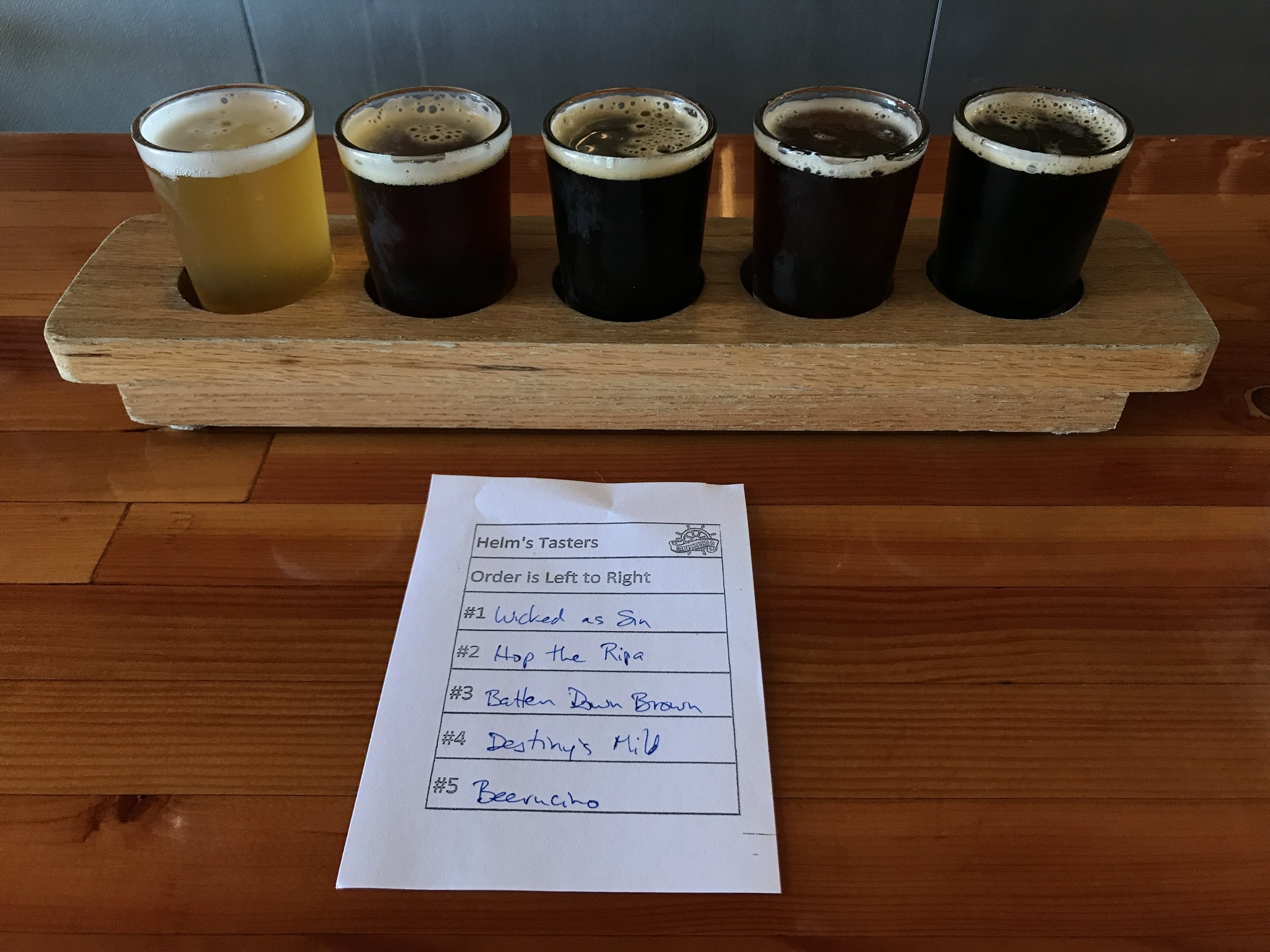 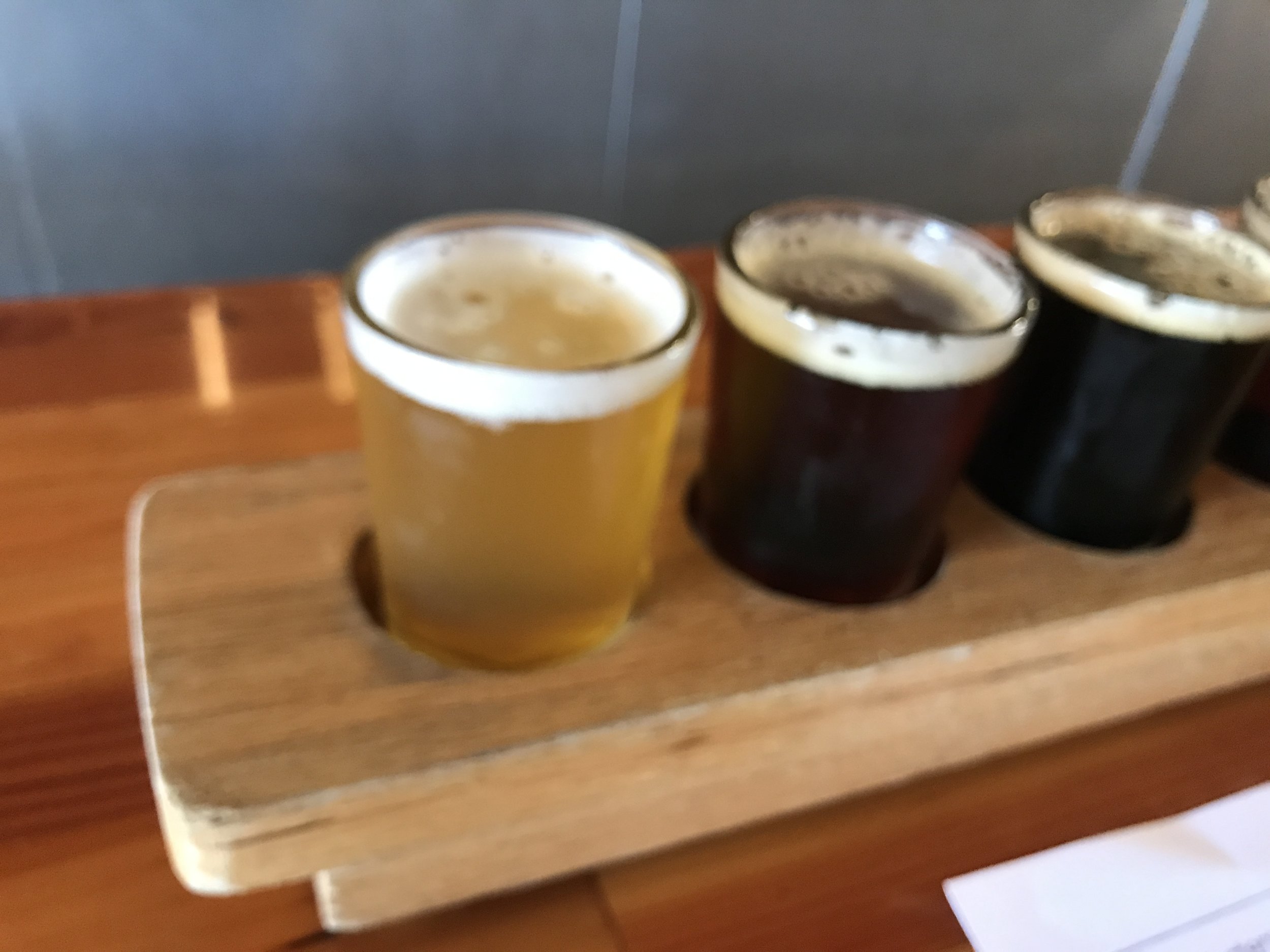 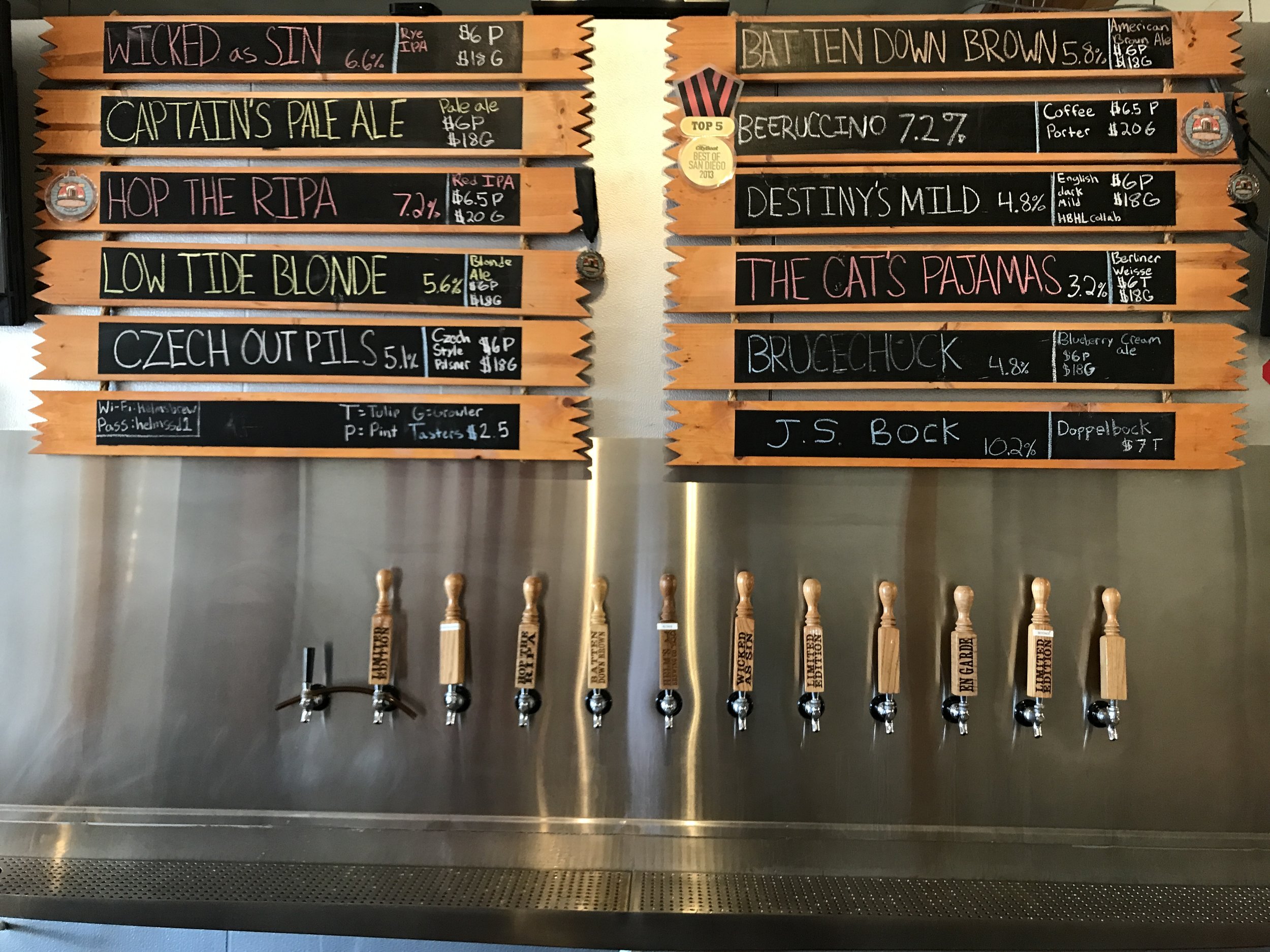 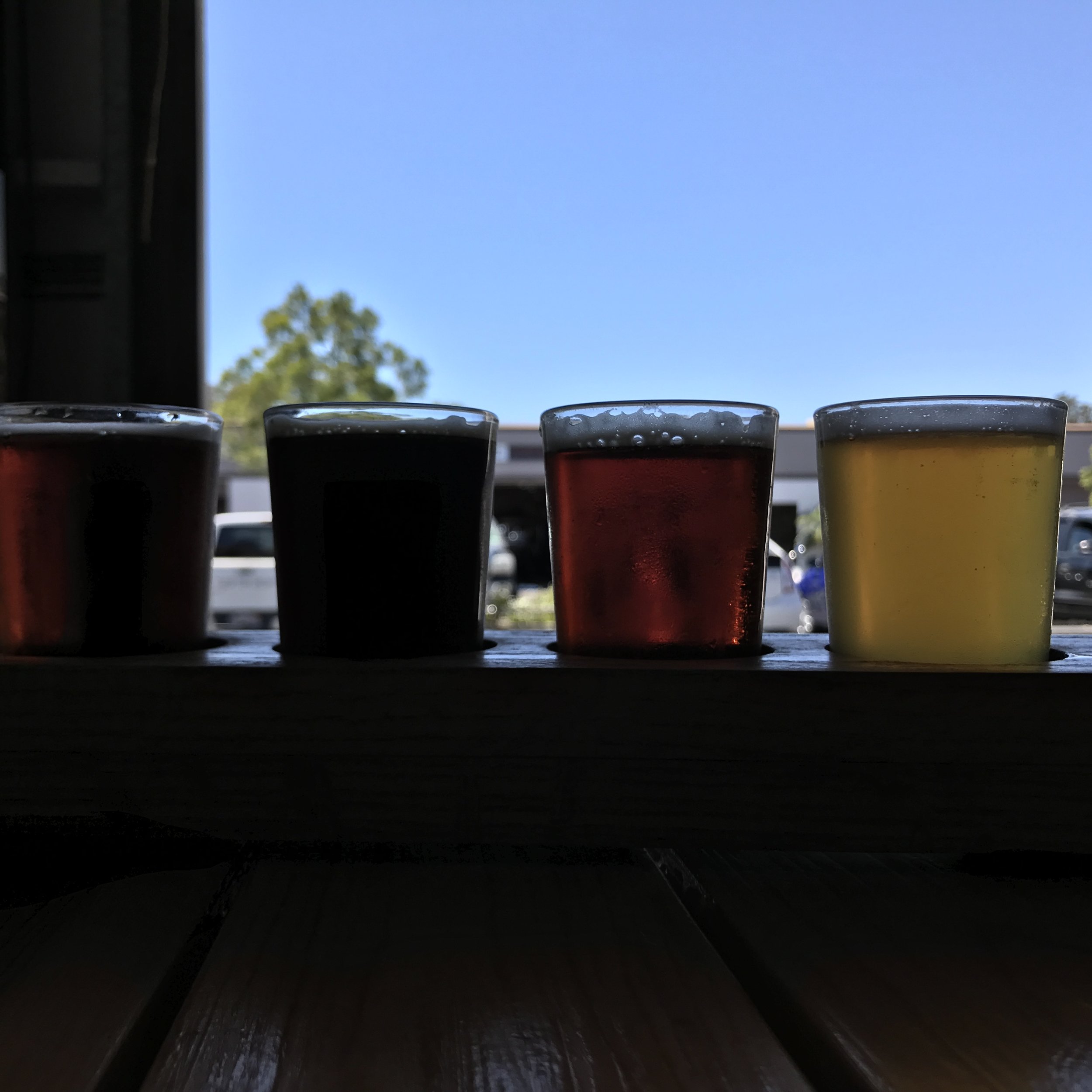 It was a bit tricky to find the place–I drove past it and had to double back, but eventually I saw the pop-up canopy emblazoned with the Helm’s logo set up in front of the doorway and knew I had found safe harbor. (Sorry, I just can’t stop.)

They were pouring 11 beers, so I got to try about half of them. After rating my five tasters, I checked Untappd and it turns out that three of the five I had tried before, when I visited the Helm’s Brewing Ocean Beach tasting room, reviewed here. On two of those three beers, my ratings were just slightly lower this time as compared to that previous occasion, and on the third beer it was just slightly higher. (The net change was -0.25 stars out of 11 stars for three beers, so, pretty consistent.) The change represents either my different mood on the two days, the fact that this time I was getting the “first runnings” from the tap as the lone customer, or perhaps the development of my palate (I have sampled more than three hundred beers since then: that was my 13th brewery review, this was my 92nd). Or, more likely, it just represents “rater unreliability,” my own inability to attach accurate numbers to my beer experiences over time.

Wicked as Sin (Rye IPA, 6.6% ABV). Rye IPAs always make me happy. This one has just a hint of rye, and the background IPA is piney, earthy and sharp. I like Mike Hess’s Habitus better, but this is very drinkable. 3.25/5

Hop the RIPA (Red IPA, 7.2%). A highly hopped Irish red. Sweet malts play against a sharpness and the floral/earthy/juicy hops. 3.25/5

Batten Down Brown (American Brown Ale, 5.8% ABV).  There’s a good toast on the malt. A slight sharpness is balanced by toffee sweetness. A good brown.  3.5/5

Destiny’s Mild (English Mild Ale, brewed as a collaboration with Hoppy Beer Hoppy Life, 5.4% ABV). I have been seeing more milds around town, and it is a trend I approve of. I’d like to see the ABV turned down a notch on this one, but overall it is balanced, with a soft mouthfeel and a flavor dominated by lightly toasted malts.  3.5/5

Beerucino (Coffee Porter, 7.2% ABV). Helm’s “flagship” beer, if it has one. While not as intense as something like Alesmith’s Speedway Stout, this is very flavorful and very drinkable. With dark roast malts, it comes across as very balanced: the coffee flavor is present but not dominant. The mouthfeel might be a bit too thin; maybe it would be better on nitro. 3.75/5

Overall, Helm’s beer is very good and I would love to have more of it. I’ve been hampered in getting more of it because lately I’ve mostly been available to go to breweries early in the week, but Helm’s Kearny Mesa location is only open Thursdays, Fridays and Saturdays. Given their location in a slightly out-of-the-way commercial park, perhaps that is a good business decision. Speaking personally, I wish they were open more days–something I could say about most of the breweries in San Diego. If it were my place, I’d also put in better signage near the street and a few more tables. But those are quibbles. While I found the Helm’s Ocean Beach satellite tasting room to be a better place to drink beer (for location, decor, comfort and crowd), the beer itself is worth coming for and the brewing location is perfectly comfortable.