Amplified E-Vil is going to be a VERY popular place: #craftbeer, food, coffee, full bar, open early and late, ambience, service, location…all excellent. This might be the new “place to beat” in downtown San Diego.

“Amplified E-Vil” is one of the coolest abbreviations I’ve come across. Amplified’s COO Michael Craig came up with it by accident when compiling a company memo. I don’t think I’ve seen anyone use “E-Vil” for “East Village” before, but I bet it will get a lot of use from now on. I’d buy merch with that on it, for sure. 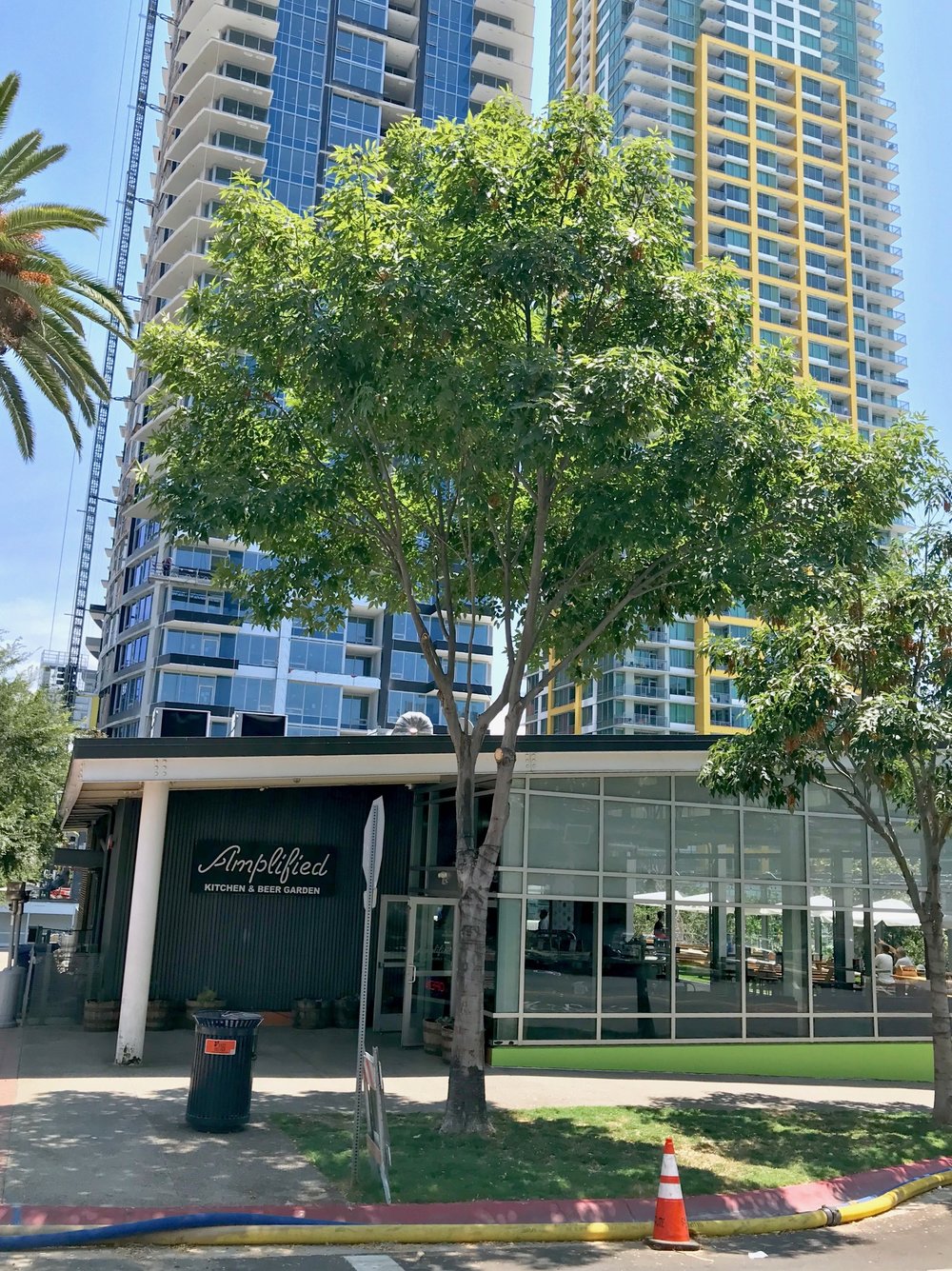 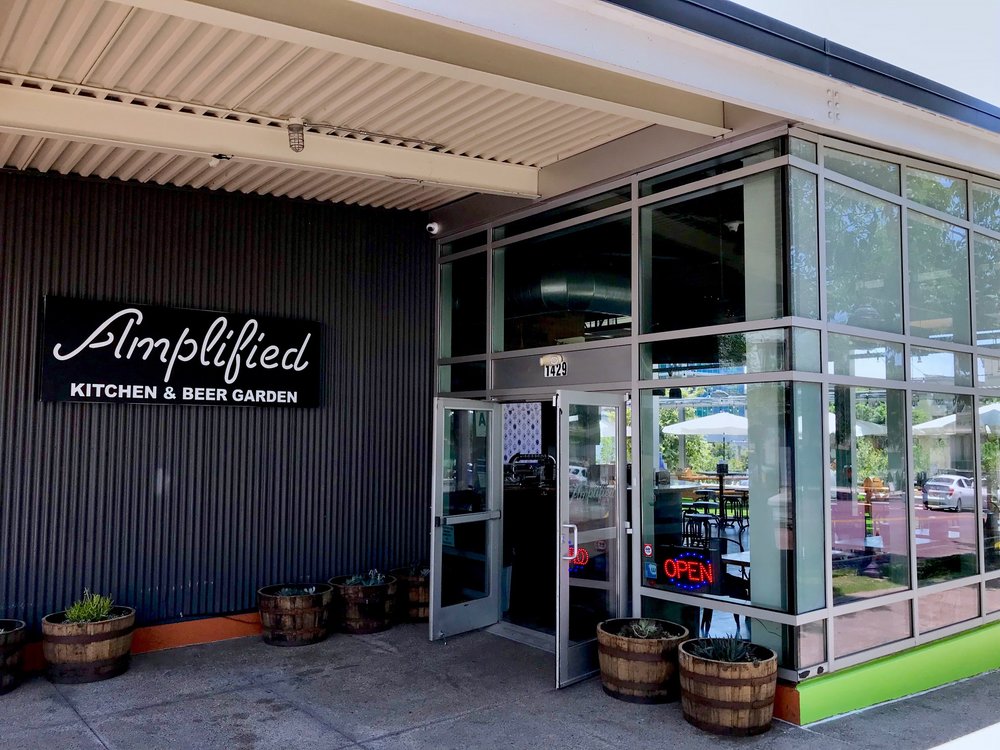 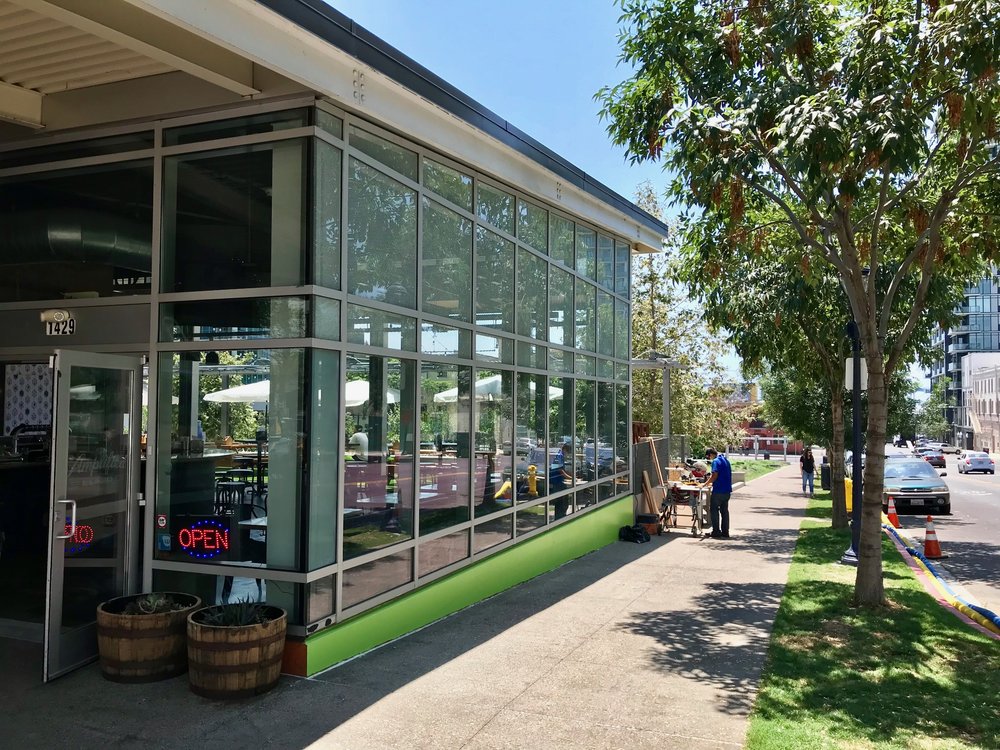 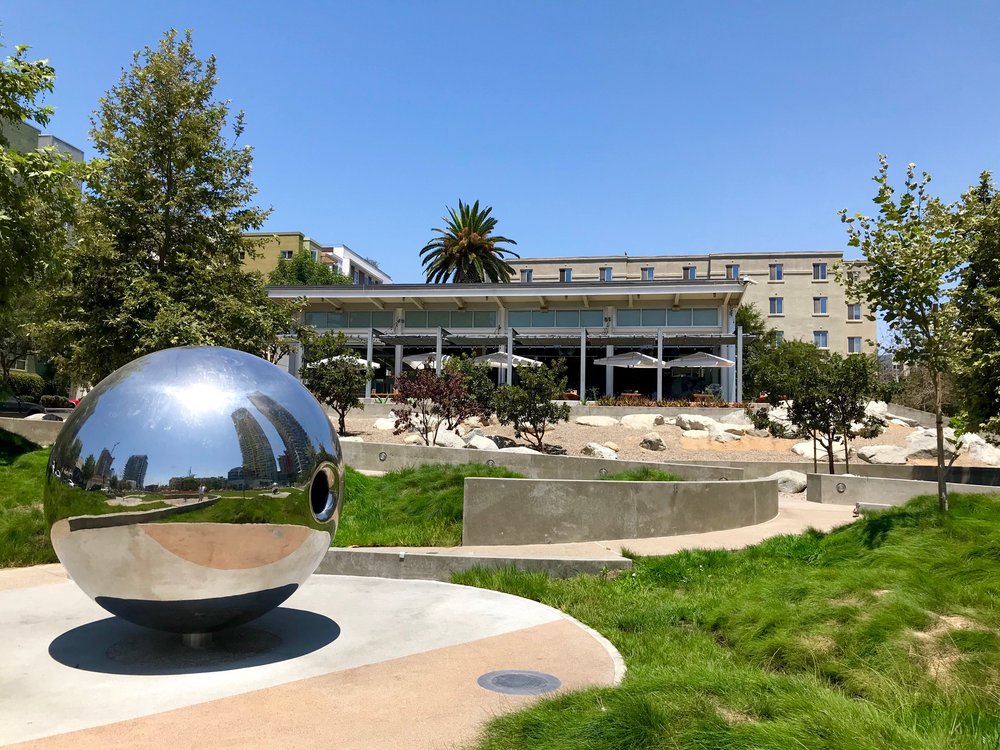 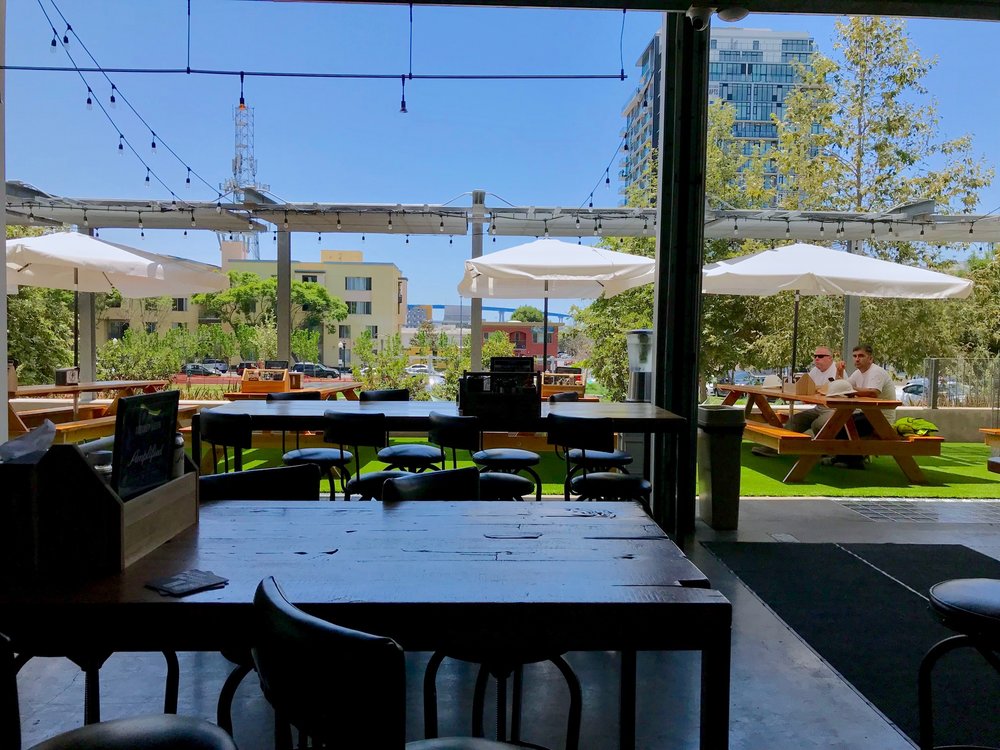 The new space is excellent. There is a lot of glass and concrete, high ceilings, and the whole front side opens out to a lovely view of Fault Line Park. (Get up close to the shiny silver spheres, they hum.) Picnic tables with umbrellas on the patio and long communal tables on the inside provide plenty of seating. There are two bars: one for coffee right when you walk in, and another on the other side of the wall for beer. I forgot to count the bar seats, but it is something around ten.

Since Amplified is a very well established brewery, originally started in Pacific Beach and then expanded to the Miramar Brewery Ignitor where all their beer is now brewed, they opened with a full beer menu. They were offering 26 of their own beers on draft, one of their bottled beers, plus three guest beers on tap.  Looking at the website, I see they have since added several more guest taps. In a gesture of good neighborliness, several of them are from nearby breweries such as Half Door, Resident and Knotty Brewing. There is also a full bar if you are in the mood for a cocktail.

Amplified’s beer leans IPA, Belgian and lager by style–and definitely leans high-ABV by composition. I saw 7 IPAs on the menu (NEIPA to WCIPA, with DIPAs of each kind), two hoppy pale ales, 6 Belgians of various varieties (golden ales, dubbels, tripels, and quads, oh my!) and then 5 lagers. Besides the barrel-aged quad, the only typical “dark” beer on the menu when I visited was a Russian Imperial Stout. Only nine of the beers on the menu, five of them the lagers, were below 6% ABV; 12 were 7.5% or higher. A 16oz pour ranges from $6 to $7.50, with the very strongest beers at $8 for 8oz. A flight of four 4oz pours in large snifter glasses comes in a cool electric guitar-shaped flight tray for about $10.

A black IPA is a relative rarity these days, so when I saw TWO on the menu I knew I had to have both to compare them. Neither blew my socks off, but both were good. Into the Void (Black IPA, 8.9% ABV) has a solid malt backbone with plenty of roasty flavor and a prominent bitter finish. I rated it 3.5/5. Next up was N.I.B. (Black IPA, 8% ABV), which is sweeter and less bitter than Into the Void, with a softer overall impression. I like this one a little better for drinkability and rated it 3.75/5. But both are high ABV so be careful! Before that I had tried Off the Record (Belgian Strong Golden Ale, 8.8% ABV). This is a variant of a golden ale called Gold Record, brewed with Belgian yeast. It is a well-made and well-balanced beer. If you like the style, you will like this beer. I wish I had had the non-Belgian variant to compare the two. I rated it 3.5/5. I ended my session with Big Muff (American Barleywine, 9.5%). I’m not usually a barleywine fan but this one is good. Toffee sweetness, a cherry-like note, a little ABV heat. Balanced but intense: 4/5 in my book. To get a fuller/fairer representation of Amplified’s beer overall, you would need to explore their IPAs. I’ve recorded twelve different Amplified beers on Untappd, and most of them were IPAs. The tastes span nearly two years, so I’ve changed and no doubt they’ve changed in that period, but at least in my experience they are generally on the high end of average, perhaps a touch inconsistent, with a few outstanding and unusual brews. Others who drink Amplified more regularly might have different opinions, and I’d love to hear them. 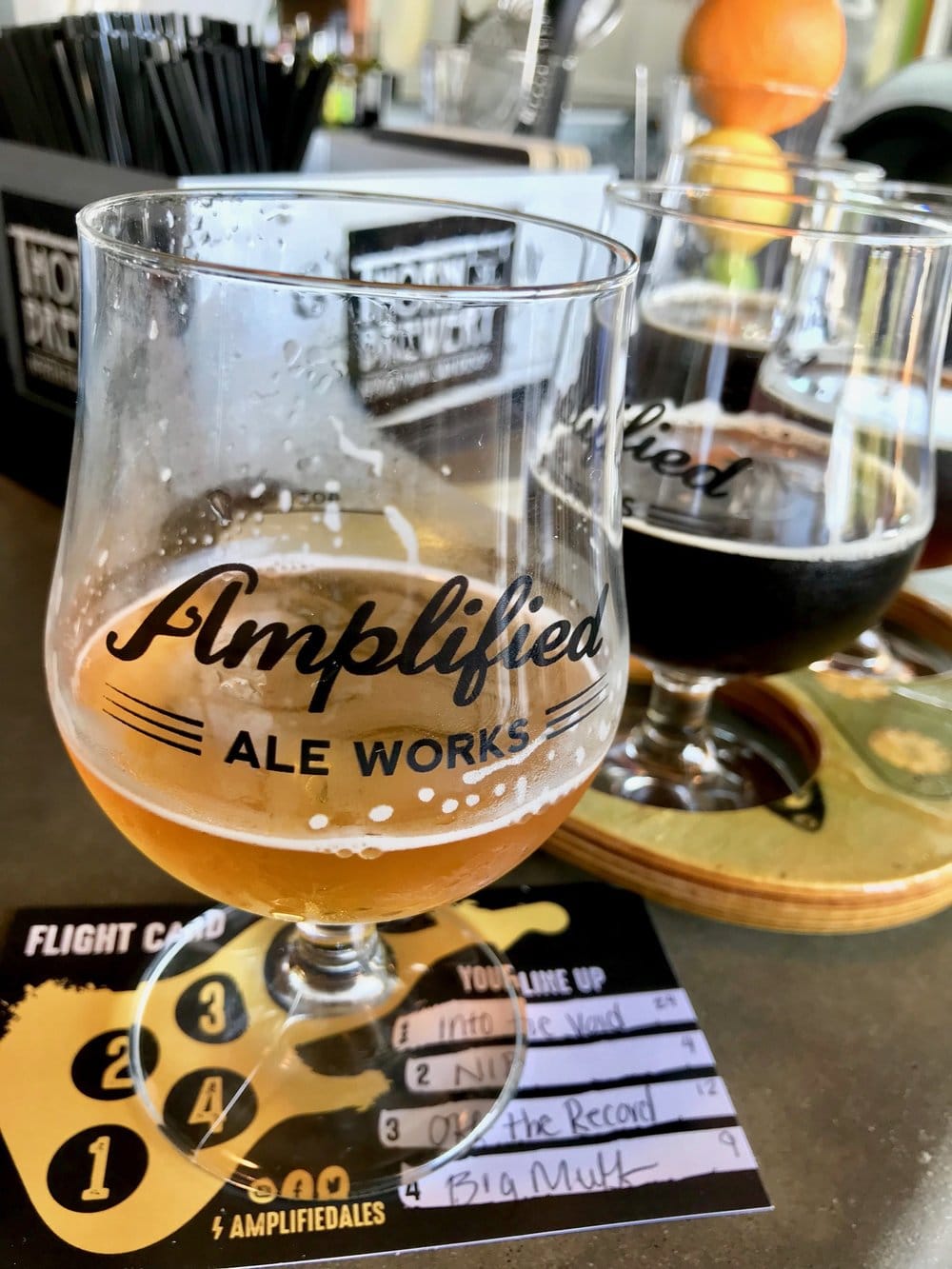 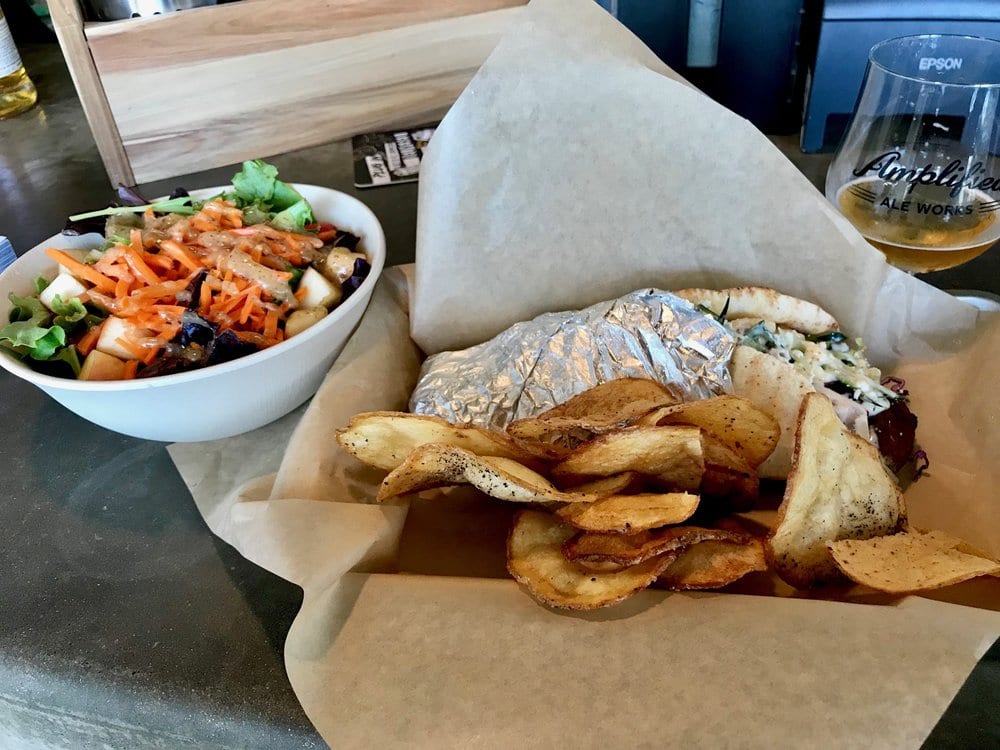 Amplified’s food program also is fully-formed. Their kitchen in Pacific Beach has long been well known for solid food and decent prices. Like the original location, a big chunk of the menu in E-Vil is doner kebabs, the perfect food for eating while drinking. I got mine (falafel) with house made kettle chips and a side salad–that combo is certainly big enough to share. The ingredients were fresh and delicious. My only slight complaint was that the 94% humidity on the day of my visit took the crispness out of the chips, but there’s not much they could have done about that. Because of food and coffee, they are going to be open unusually long hours for a tasting room: open at 7am on weekdays, 8am on weekends, and closing at midnight most days, 2am on Fridays and Satudays. (Obvs, check their website for updated hours.)

Service was a stand-out, too. Immediately upon entering I was offered an enthusiastic and friendly greeting. The woman at the coffee counter very helpfully explained what was where (coffee in front, beer in back, order at the bar and they bring it to you). I got attention as soon as I sat down at the bar, and the bartender was helpful in guiding me through the process of ordering a flight and my food. I had pleasant interactions with several of the employees, who all seem to like each other and to enjoy working there, which in my experience is usually a sign of a well-run operation. The COO stopped to chat and has even already followed up by email. They are doing things properly in terms of taking care of customers, in a way that a lot of local breweries could learn from.

It is not all roses, of course. The E-Vil neighborhood (see, even I can’t stop using that abbreviation) is like a refugee camp and a shining futuristic sci-fi city co-existing on top of each other. There are, to San Diego’s eternal shame, many people living on the streets here. We can and should do much better to take care of the least fortunate in society. All of that is check-by-jowl with brand new construction of many high rise luxury apartment and condo developments. No doubt, once those developments are completed and occupied, their residents will love Amplified E-Vil. It was a smart choice to open where they did. But the City and the State need to do more to meaningfully address homelessness in order to make the area as economically viable as it should be and as attractive to residents and visitors as it has the potential to be. My mission for Amplified, should they choose to accept it, is to be a leader in the local business community in advocating for those meaningful solutions.