How Many Breweries in San Diego–May Edition 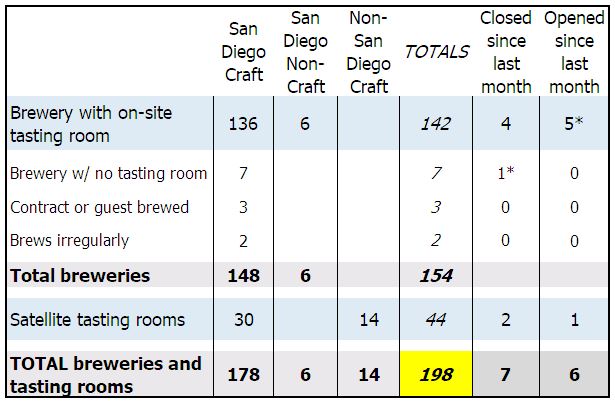 Monthly update on state of #SanDiego #craftbeer. 7 closings & 6 openings in last 5 wks. Most of that related to @GreenFlashBeer foreclosure. Net result: There are now 148 craft breweries in San Diego County, 6 non-craft breweries & 44 tasting rooms/brew pubs for total of 198.

My head is spinning! After a couple of months of relatively little activity, during the past five weeks there have been A LOT of openings and closings–including, of course, the near-panic-inducing foreclosure and purchase of Green Flash. More on that in a minute (as if you needed to hear more about that).

That brings the grand total to 198 (234 including everything in planning), a net decrease of 1 operating venue, and a net decrease of 2 planned venues. Those innocuous-seeming net numbers are the result, though, of a total of 6 closings, 1 category reassignment, 5 re/openings (including the category reassignment), and the addition of 3 planned projects I had been previously unaware of (Duck Foot East Village, Melvin East Village and Mason Tap Works Carmel Valley).

Here is THE LIST as of 4/30/2018. In my humble opinion, this is the best, most accurate list of open and planned breweries and tasting rooms in San Diego.

So here are the details of changes since my March update. Hold on to your hats.

#1 Green Flash closed its Cellar 3 tasting room as part of a retrenchment. The move turned out to be a harbinger of more to come. It seems likely a new or existing brewery will be interested in taking over the space. (Counts as -1 tasting room.)

#2 Green Flash was foreclosed on by its bank after being unable to make payments on the loan for their new Virginia brewery. That brewery was put up for auction (the equipment has been purchased now). The bank sold Green Flash and its remaining assets to a new private-equity-firm-owned corporation, WC IPA LLC, which continues to operate the San Diego brewery and tasting room. Details of how everything transpired are still somewhat unclear, and a lot of people are suspicious of whether it was all honorable–the new CEO was a former board member, GF shareholders including the founder of Alpine were all stiffed, etc. There was no time gap between the closure and the re-opening under the new owners. (Counts as -1 brewery and +1 brewery.)

#3 & #4 As part of the Green Flash sale, the original Alpine Brewing Company was dissolved. Both Green Flash and Alpine are now brands of the new corporation, WC IPA LLC. That’s not a big change in the sense that Alpine was already owned by Green Flash.  Whether it leads to a change of approach or quality remains to be seen. The brewery and pub in Alpine, CA, are both still operating as before. But, technically, both closed down and then immediately reopened under new owners. (Counts as -1 brewery, -1 tasting room, +1 brewery and +1 tasting room.)

#5 After less than a month under new owners, Oceanside Ale Works is again closed. That was quick. A record, perhaps?  (Counts as -1 brewery.)

#9 California Wild Ales’s tasting room was open to the public on the weekends of April 21 and April 28, and social media says they will be open on the weekend of Cinco de Mayo. Social media posts and word from visitors is somewhat in conflict about whether CWA will typically be open weekends or just on a “pop up” basis. In any case, I have moved them to the active brewery-with-tasting-room list, from the brewery-with-no-tasting-room list. I might need to adjust later. And you should check Facebook to see if they are open before trying to visit. (Their website says nothing about opening hours.) I had an entry in my list for a planned satellite tasting room in North Park for CWA, but given what I know at the moment, I’ve decided to delete that entry.   (Counts as -1 brewery-with-no-tasting-room and +1 brewery-with-tasting-room. That’s the asterisk in the chart.)

I had almost added an entry for Gaudalupe Brewing in Carlsbad finally having a public tasting room—whoever runs the Twitter handle for SD Brewers Guild told me it was open. But, nope. Still just a growler fill location, with occasional events, and the home brew store. HOWEVER, I believe I have a scoop in telling the beer world that Guadalupe IS opening a tasting room in downtown Vista. I heard from the owners via Facebook that construction is already underway and the plan is to open that location in summer 2018.

Speaking of downtown Vista: holy craft beer concentration, Batman. On May 5, one of my sentimental favorites, Bear Roots Brewing, will be opening their first satellite tasting room in downtown Vista. I haven’t added them to the active list yet, but mentally “add one” to the totals above. When you go to Bear Roots, have the Bear Cookie: It is hands down the best peanut butter stout in San Diego County. Yes, I do know that is a bold claim. Trust me.

The gorgeous Imperial Beach Bikeway project has hit a snag and the building is up for sale. As reported in West Coaster, this puts Coronado Brewing’s plans for a brewery, tasting room and distillery on the site somewhat into question, though reports indicate that the project may still move ahead as planned. As the Magic 8-Ball says, though, the future is hazy (and in this case I don’t mean in the IPA-related way).

The next month or so should be pretty action-packed: Several of the places on the planned lists seem to be quite close to opening. Duck Foot East Village, Mikkeller Little Italy, Barrel Rescue, and Council Santee–all are potentially open very soon. By some reports, the tasting room downtown for non-San Diego craft brewery Melvin Brewing could open soon, too, but that company has been experiencing a huge backlash for its handling of recent sexual harassment accusations and its bro culture, so we’ll see what happens (and whether they will be welcomed in San Diego given everything that has come out about them).

The fact that the number of open locations has stayed at 198 despite the major changes described above is further proof of the point I made in a piece I wrote at the end of March 2018 about craft beer closures/re-openings. That post was the most-read that I’ve had on this blog, which made my monthly traffic the highest it has ever been, too. Thanks to everyone who was interested!