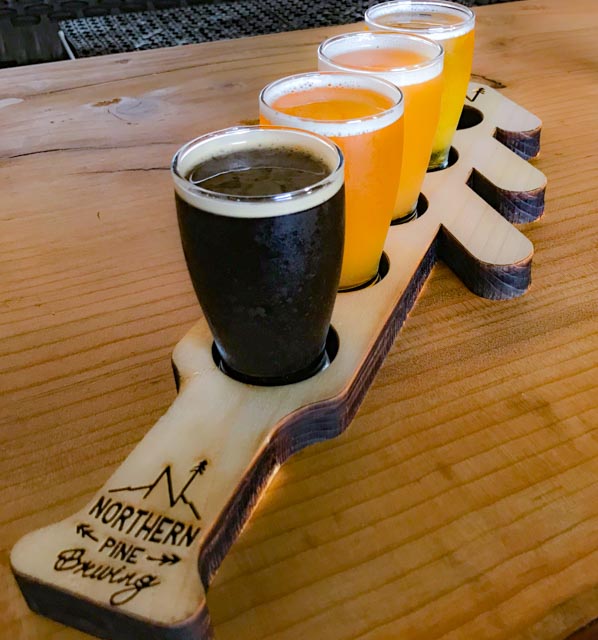 Northern Pine Brewing in Oceanside offers a good location, a well-designed interior, good service, food, and beer that is well-crafted right out of the gate. #craftbeer #sandiego

The Northern Pine Brewery in Oceanside has been in the works for a number of years. They’ve had a brand and an internet presence for as long as I’ve been in San Diego, at least, and had done various home brew-type events to build a following. Now they are finally open. They wisely choose to co-locate with a southern barbecue company, so you can get (really good) food here, too. By the way, the Northern Pine name comes from the partners’ Oregon roots, so there is a “north and south” thing going on between that and the barbecue.

The room is big and open, with lots of light coming in from the doors and large open window. The barbecue place is on the left as you come in, and the bar takes up most of the wall opposite the door. The main room is filled with low communal tables, and the brewing system is tucked off to the right. Someone on Twitter thought a picture of the place looked like a school cafeteria, but it really doesn’t resemble that in person. It is a comfortable, well-decorated room. The bar is an impressively chunky piece of tree, and the feature wall above the taps is made from split logs.

I had very good service when I was there, a little after lunchtime on a weekday, both at the bar and at the barbecue place. In addition to walking me through the beer menu and talking a little about the brewery, the bartender recommended the deviled eggs, which I thought were excellent. My only qualm about the food-beer combo is that barbecue can overwhelm your palate with spiciness and rich flavors, so maybe beer tasting should come before rather than after eating here.

I visited just a couple of weeks after their opening, so they didn’t yet have their full slate of beers available. What I did get to try was very well made and flavorful, miles ahead of where most breweries are when they first open. In that respect they remind me of another already-awesome-on-opening-day place, Protector Brewery in Miramar.

S.M.A.S.H. (Single Malt and Single Hop Pale Ale, 6.5% ABV). This will be a series of different malt/hop combos rather than a consistent single recipe. This first batch, I heard from the bartender, was a bit of an accident. It was a brew day and they were sent Northern Brewer Hops by mistake; they decided to make it anyway. I don’t recall ever having Northern Brewer Hops (not in this sort of application at least, a very hoppy pale ale). It is very different, and interesting. But I’m not sure it is good. Anyway, the next batch will be something else.  3/5

Dark Traditions (Porter, 6.7% ABV). Soft mouthfeel, mild dark malts, with a background smokiness (or is that the BBQ smell that permeates the room?). 3.75/5

While you are here, make sure you visit the bathroom. There’s a fun mural depicting the stages of the brewing process on the walls around the room, that ends just above where you “recycle” the beer and make room for more.

Northern Pine is already good and I have a feeling it won’t be long until we are saying they are very good. All the elements are in place. A good location, a well-designed interior, good service, food, and beer that is well-crafted right out of the gate. Some of the previously existing Oceanside-based breweries will need to put in some work to compete.