This new addition to Barrio Logan’s brewing scene will be popular for its back deck and solid #craftbeer. #SanDiego

I was driving past Barrio Logan and figured that was a good opportunity to drop by and see what’s up at Alta Brewing. Alta has only recently opened, after being in planning and development for a couple of years. In fact, they were still in their soft opening phase when I visited (grand opening Sept. 16).

There are some nice articles about Alta linked from their webpage, so I won’t repeat what’s already been written except to emphasize two points. First head brewer Brett Stampf (who also happened to be working the bar when I dropped in) has a ton of craft brewing experience, and as a result the beers at launch are already good without much work needed to dial them in or create a brand identity. Second, the other partners in the business have engineering and general contracting experience and that shows, too, in the quality of the build-out of the tap room.

While I was chatting with Brett he mentioned that all the artwork and graphic design for the brewery–including the bull’s head mural in the tasting room and the logo–were the products of female artists. The logo was actually the first commercial work of homegrown San Diego talent.

As for the mural, look closely at it and you’ll see it isn’t a copy of the logo but instead is an original take that includes the key ingredients of beer–water, barley, hops and yeast–symbolized from top to bottom through the middle of the bull’s skull. 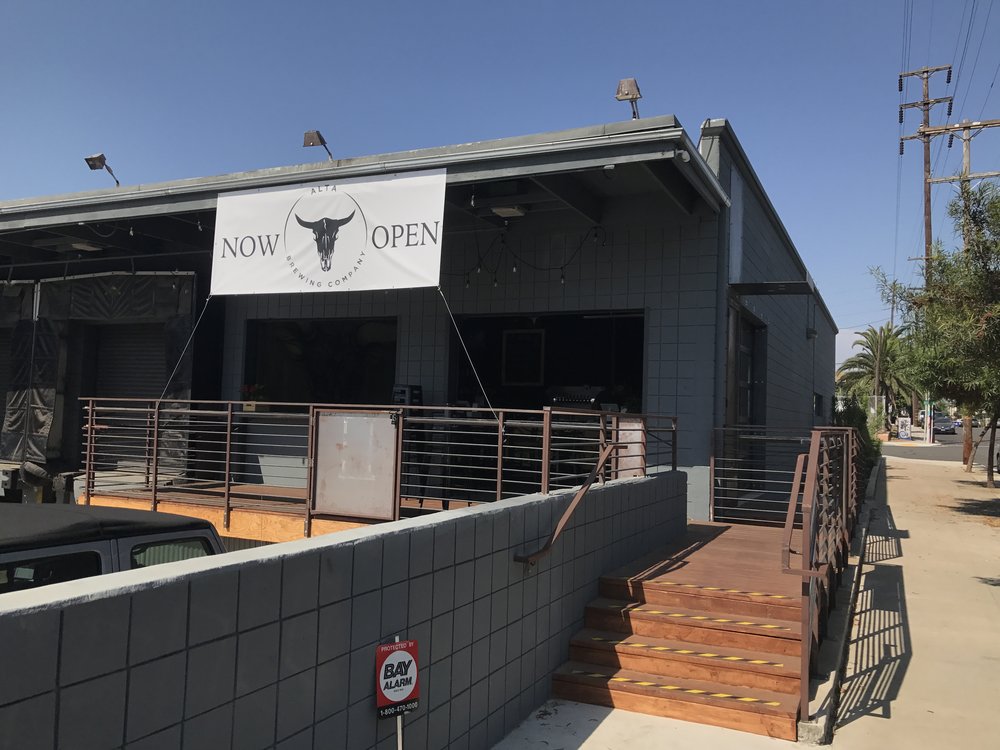 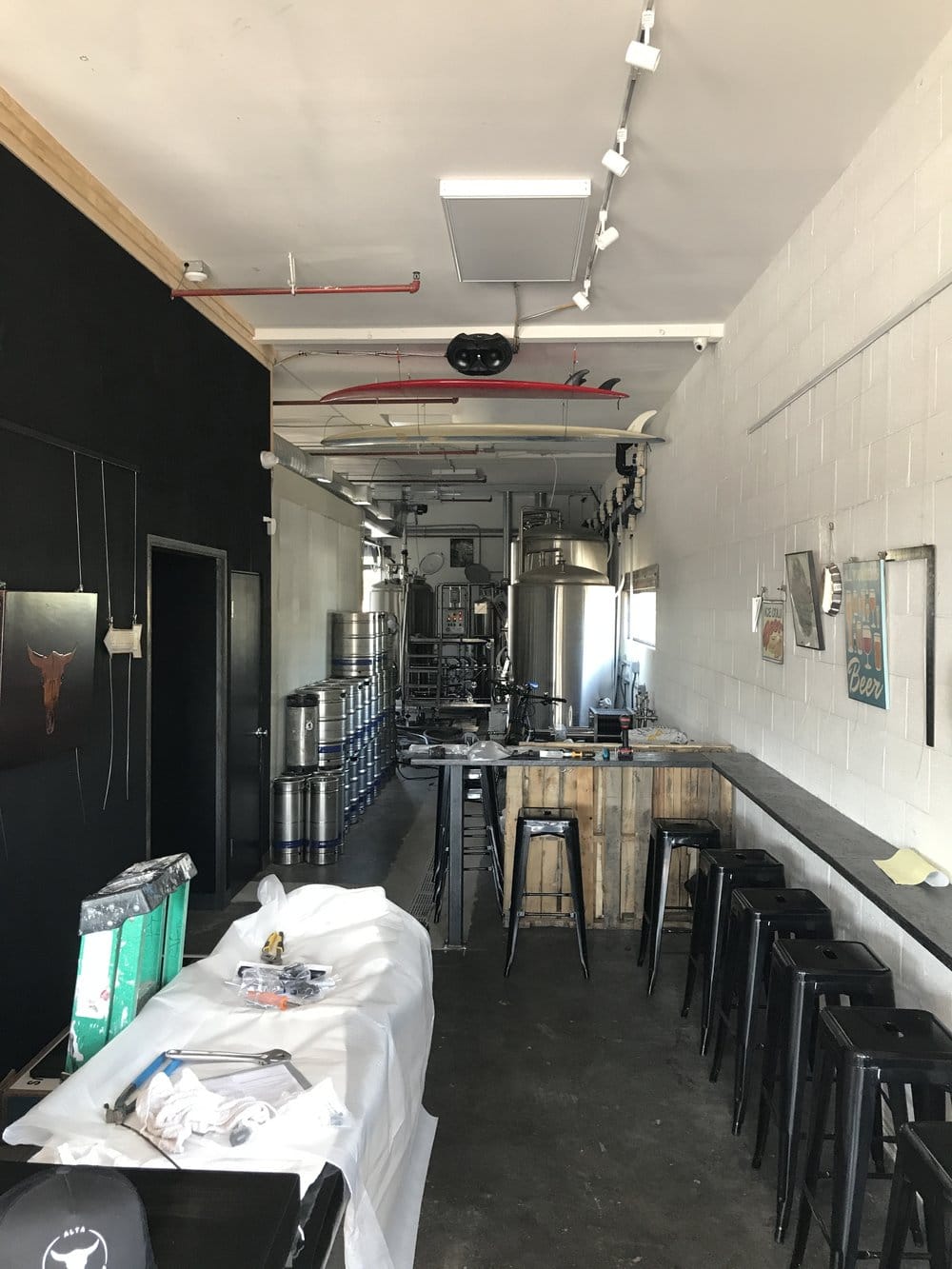 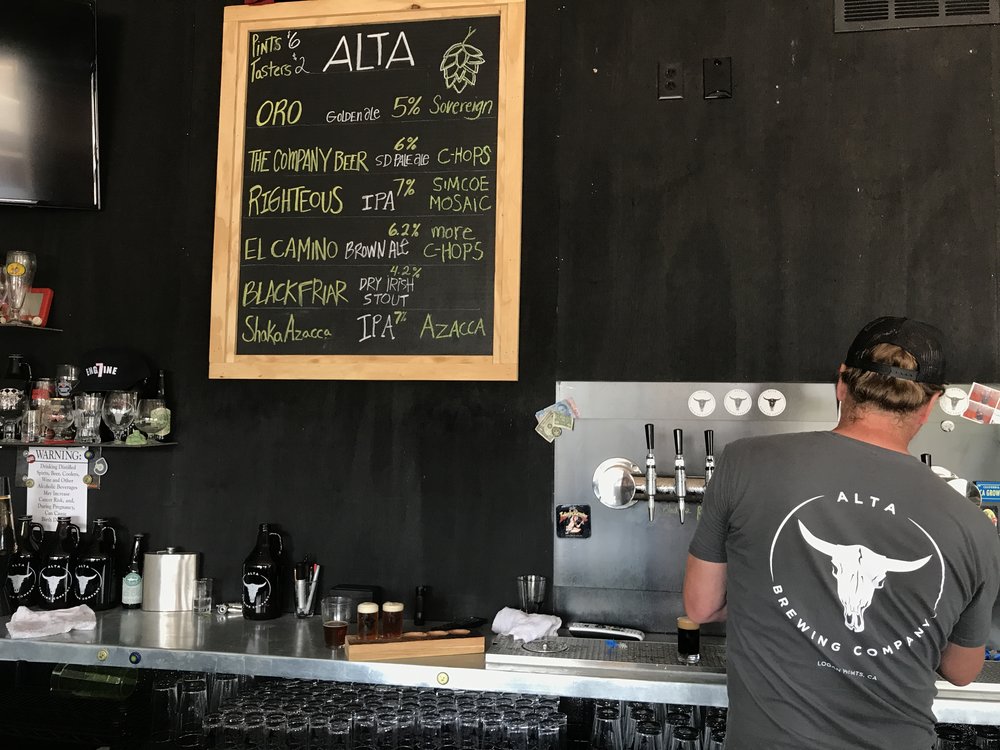 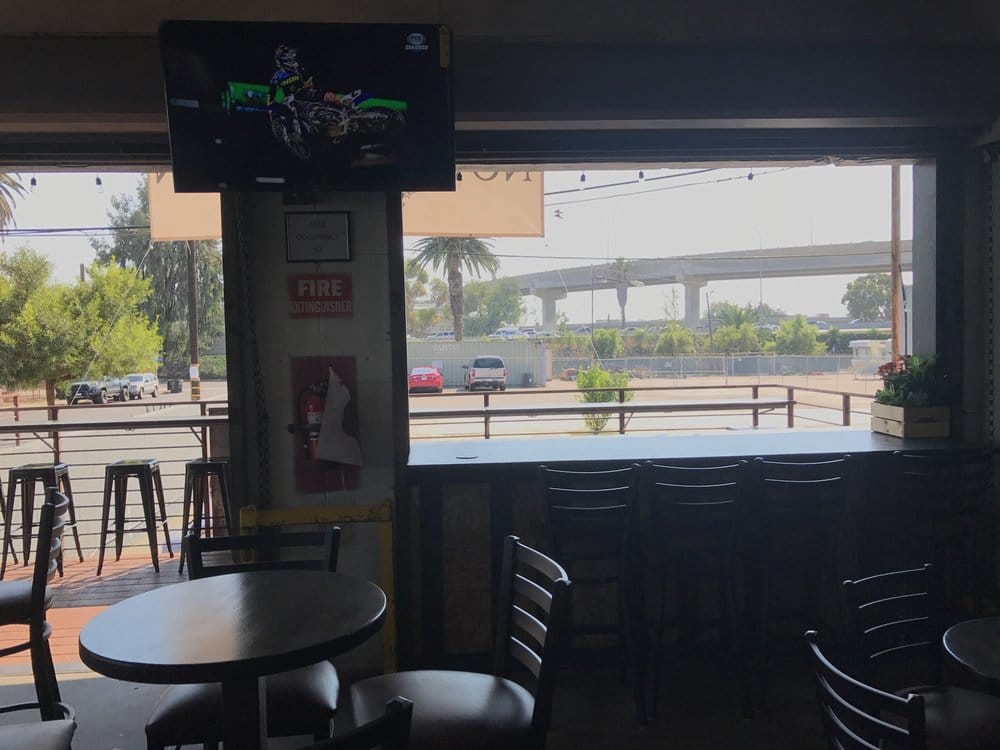 Alta is not far from the Iron Fist Brewing Barrio Logan tasting room. As you drive under the highway to enter the neighborhood, you’ll see the famous Chicano Park murals. You’ll notice that the neighborhood is a mix of a lot of things–small houses, restaurants, shops, old warehouses, and a big pink church. Alta is located on the back side of an old building that has been repurposed as a cultural hub for the area, with an art gallery and other spaces, called Bread & Salt. It doesn’t look like the sort of area in which you would find a brewery, and that’s probably a good thing. There is parking on the street and in a small lot behind the building. (Watch out as you are crossing the alley to the parking area, there’s a blind corner and locals using the alley as a shortcut aren’t expecting pedestrians.)

The tasting room is open on two sides, which brings in a lot of light and air (unfortunately that also brings in the noise from the highway that is a few hundred yards away). It looks great, predominantly blacks and browns with iron and stainless steel accents. There are seats at the bar, at a counter in one of the garage door windows, at high tops inside, at a beer rail along one wall, and there is a back deck. Overall the place is large enough and nice enough to be comfortable, yet small enough to feel special.

Since they aren’t “officially” open yet, I won’t give detailed beer ratings but will wait a few months for that. I will say that the four beers I tried (a pale, a golden, a brown and a stout) are all well-made and tasty. There is a little dialing-in to do, I think, but these will be popular beers. They are pouring six beers now, with a couple doubled on nitro, and they will expand their offerings in the coming months.

Thorn Brewing tasting room should open soon in Barrio Logan, and the little diamond of deliciousness formed by Thorn, Iron Fist, Alta, and Border X will be complete. It is just a 0.9 mile walk to go to all four!