How Many Breweries in San Diego? October 2018 Update 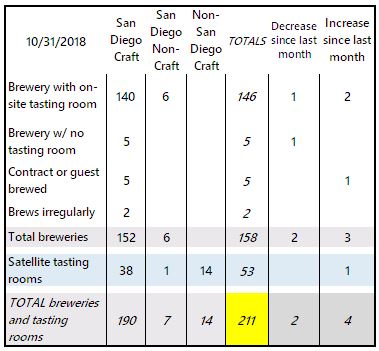 Since my September update, one brewery closed and two breweries opened. One tasting room opened. San Diego has a total of 158 breweries plus 39 tasting rooms and 14 non-San Diego craft brewpubs for a total of 211 locations, a net increase of two over last month.

A couple of weeks ago, a San Diego Reader article mentioned five recently-opened breweries—two of which make their appearance here for the first time. That article starts with the claim that brewery openings have been happening at a slower pace than last year, but according to my data that is not true. Since the beginning of 2018, nineteen breweries and nine tasting rooms have opened in San Diego (including four re-openings under new owners). That’s twenty-eight locations in forty-two weeks or 0.67 per week. There could be as many as eight additional new breweries and three more tasting rooms by the end of 2018, which would be 0.75 openings per week. In 2017, it was twenty-eight new breweries and seven new tasting rooms, or 0.67 per week. So, currently the pace is the same as last year or perhaps even a bit higher.

Creature Creature opened in El Cajon at the beginning of October.

The Modern Times “Far West Lounge” tasting room and restaurant in Encinitas soft-opened on 10/22. I’ve been already and will write it up soon. Spoiler alert: It is excellent.

Helia Brewing (not to be confused with well-established La Mesa operation Helix Brewing) soft opened in Vista on 10/10, and had a grand opening event on 10/13.

Speaking of Helix Brewing, “Sourworx” opened on 10/20 in a building nextdoor to their original brewery, tasting room and beer garden. It houses fermenters, a beautiful second tasting room with more indoor seating including at the elegant new long bar, and a barrel-aged sour beer program. This is an enlargement of the existing “brewing campus” rather than a new location, since it is all connected and has just has one entrance. I went to the grand opening and will soon post about it here. Spoiler alert: It is awesome.

Speaking of sour beer, Toolbox Brewing, beloved by sour and “milkshake” IPA fans, closed its doors suddenly on 10/14/2018. There was a well-attended farewell weekend. Their equipment was reported as up for sale.

According to a West Coaster article on 10/8/2018, Dos Desperados Brewery has taken over the space next door to their San Marcos location to expand. The space next door was Prodigy Brewing, a craft brewery that had no tasting room. According to a message I got from Dos Desperados on Twitter, Dos Desperados is now contract brewing the Prodigy beers and those beers are still being distributed. It is an unusual case since you could call it a brewery closure—but the space has already been reopened by another company and the original brand is still available. I’ve moved Prodigy from the “craft brewery no tasting room” to the “contract brewed” category. But perhaps it is more accurate now to treat it just a second brand of a single brewery, like Hop Concept is a brand of Lost Abbey, Owl Farm and Booze Brothers, or Arrogant Brewing and Stone. I’ll have to think about it.

In a move I don’t understand, Absolution-by-the-Sea, which just opened in January, has already rebranded as CAVU Brewing (same company, beers, location, etc.).

Little Miss Brewing is expecting to open their East Village tasting room, right across the street from the excellent Duck Foot East Village, around the end of November, according to a post on their Facebook page. Melvin Brewing should be open a couple of blocks away soon, too. Is East Village the new North Park of craft beer?

West Coaster announced that Epic Wings N’ Things is a brewery in planning for 2019 in Escondido, continuing the trend of local beer-friendly restaurant chains getting into brewing for themselves.

Another restaurant/brewery giant is planning a concept in San Marcos, to be called My Yard Live. See the West Coaster article for all the details. Expected opening mid-2019.

Temucula-based Black Market Brewing will open a 10-barrel brewpub in the College East neighborhood next to SDSU.

Pure Project will open a tasting room in Bankers Hill in mid-2019. This is very exciting news for serious beer fans.

Prohibition Brewing has taken over the space (but not the equipment) of the former Fallbrook Brewing and will install a tasting room and restaurant there.