How Many Breweries in San Diego? November 2017 Update 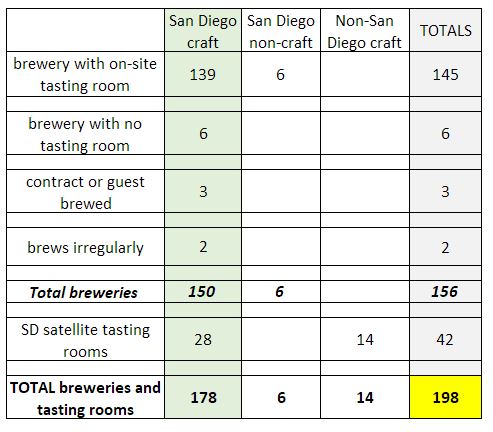 November 2017 San Diego beer update: 10 new breweries and tasting rooms since mid-Sept brings the total to 198, an increase of 25 in the last 7 months, and nearly 50 in the last year. #craftbeer #sdcraftbeer #SanDiego

It has been a busy six weeks in the San Diego brewing scene! By my count ten new breweries and tasting rooms opened, and two breweries closed. San Diego now has:

Since my last monthly update, 11 San Diego breweries won 14 medals at the 2017 Great American Beer Festival. That’s a great result. Congratulations to all the winners. And congratulations to all of us San Diego craft beer drinkers for getting to drink such great beer! (The count is 15 if you include Mother Earth’s medal, but that beer was brewed at their Idaho facility.)

One of those GABF winners isn’t really even “open” yet: SouthNorte Beer Co. won a bronze medal in Specialty Beer for their Agavamente. SouthNorte is currently guest brewing at Coronado Brewing Company, and apparently plans to open their own facility in the future.

Partly because of this unusual situation with SouthNorte, this month I’ve created a new subcategory in my list: Contract or guest brewed beers. This subcategory includes Oeuvre Artisan Ales (guest brewed at Intergalactic) and High Point brand beers (contract brewed by Mission Brewery exclusively for the Bluewater Grill chain including a new Carlsbad location). I struggled to categorize Bluewater (brewery? brewpub? tasting room?) and this new category resolves some of my difficulty on that score. However, things remain fuzzy: All but one Oggi’s location now has all their beers contract brewed by Left Coast in San Clemente: for now, I’ve left those Oggi’s in the “Non-San Diego Craft Tasting Room” category, but it is admittedly not a good fit. BJ’s is the other member of that category: they are craft, they operate their own breweries, but they don’t brew in San Diego.

Speaking of Coronado Brewing Company, their recently acquired sub-brand (like how Green Flash took over Alpine a while ago), Monkey Paw Brewing, was also a GABF winner: ESSA was a silver medalist in the English Style Summer Ale class. Coronado is a double winner by association, I guess you could say.

This was an active month of openings, closings and mergers.

If you are curious about the differences between my list and the West Coaster Magazine brewery list, here they are (as of the date of publication of this post): WC has SouthNorte sharing an entry with Coronado Brewing’s Bay Park facility; WC does not have Oeuvre Artisan Ales on their list; WC has a second Ballast Point location in Miramar (“Trade Street”: to me, it is just an extension of the one facility); WC hasn’t yet taken Wiseguy off the list; WC’s list doesn’t yet mention the Rough Draft satellite at UCSD; WC doesn’t yet list the Second Chance North Park location as open; and WC still has the Little Miss Ocean Beach project listed as in planning, though as WC reported elsewhere, that project is dead. WC still has O’Sullivan’s listed as open, and Savagewood doesn’t yet appear in the list. By coincidence, those additions and subtractions exactly cancel out, so West Coaster’s 156 operating breweries is the same number as I have this month, though we categorize things differently. (WC is where I get much of my information; they just haven’t updated their brewery list in about a month so it hasn’t yet caught up to their reporting.)

On the eve of the San Diego Brewers Guild’s annual San Diego Beer Week Guild Fest that starts on Friday, November 4 (and, oh, boy, am I excited!), it is worth pausing to note that 27 of San Diego’s 156 breweries (17.3%, or more than 1 in 6) are not SDBG members.

For the record, I have now completed 153 reviews: two locations have since closed, one was a BJs, one was an Oggi’s, one was a cidery. So 148 of those reviews count toward completing the 184 locations currently on my list. But 6 of those do not have tasting rooms and 2 are brewing very inconsistently. So I have about 30 places left to hit–plus any news ones that open before I finish my quest. The driving distance and opening hours of the locations on my “to do” list are conspiring to make it very difficult for me to get to the remaining places, which is why I haven’t been posting many new reviews lately.