How Many Breweries in San Diego? January 2020 Edition 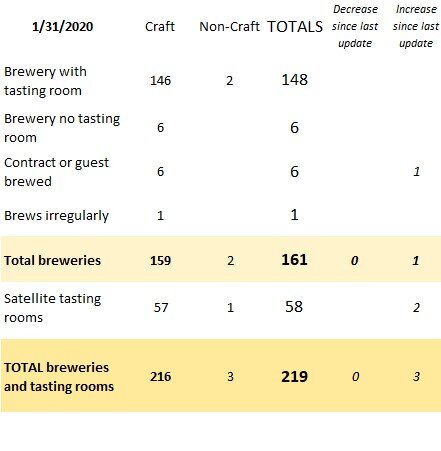 There are now 159 craft and 2 non-craft breweries in San Diego County ( net +1), 57 craft and 1 non-craft tasting rooms (net +2), for a grand total of 219 locations (net +3). Four new locations set to open later this year were announced in January 2020, bringing the total number of projects in planning to 44 (27 tasting rooms and 18 breweries, about 14 of which I judge to have a good chance of coming to fruition in 2020.

January did not quite manifest the flurry of openings I had been expecting. Those projects are all still coming, just a little later than hoped. There were no closures in January 2020.

Booze Brothers held the Grand Opening of their Oceanside tasting room on January 24, 2020.

In surprising news, West Coaster has updated their list of breweries for the first time in ten months! (wink) Their February 4, 2020, update only has seven errors, so that’s a big improvement over the 50+ errors I counted in fall 2019. (wink) But, to be fair, they have simplified their task considerably by leaving out the 57 satellite tasting rooms that make up about a quarter of San Diego craft beer locations., plus they got rid of their “in planning” section. Most unfortunately, they have deleted the history log that was one of the best features of their list over the years. I’m not really criticizing them—I know how difficult and time consuming keeping up a list is, and my list is largely parasitic on their news coverage. But I’ve offered to help them keep their list updated on several occasions, and while we have seemed to agree to move forward on a couple of occasions, they don’t follow through. For the record, in case they are reading, the offer is still on the table.

West Coaster announced two new projects in mid-January. Amplified Ale Works has purchased a new space in Lemon Grove that will be both a production brewery and a tasting room, and when that is ready (likely by summer 2020) Amplified will move out of their Miramar Brewery Igniter location.

By the way, this means that four of the soon-to-be nine Brewery Igniter locations are looking for tenants: one of three in North Park, one of two in Miramar, and two of two in Oceanside. At the moment both Igniter locations in Calrsbad are occupied, but Rouleur has stated their intention to move out at the end of their lease term, February 2021. Is the Igniter model going to survive?

We knew this was in planning, but now it is definitely happening: Lost Abbey has purchased an old church in East Village and will turn it into a tasting room before the end of 2020.

Tap Room Beer Co. has been “coming soon” to North Park for ages, but they are now hiring for back-of-house so it must be close.

Black Plague Brewing of Vista will be opening a satellite tasting room in North Park—their plan is to open in May 2020.

The many fans of Carlsbad’s Burgeon Beer Co. will be excited to learn that they are opening a satellite tasting room in Little Italy—with beer, wine, and an on-site kitchen by Good Seed Food Co. They aim to open in late summer 2020.