I love the smell of hops in the evening.

Green Flash invited me to a tasting/pairing/branding-reveal at their brewery in Sorrento Valley a few weeks ago. It was a great time. Speaking of Sorrento Valley, be sure to check out my beer tour of the seven breweries and tasting rooms in that under-appreciated part of San Diego.

I haven’t been to the brewery in ages, since before the foreclosure/sale in spring 2018. Back then beer Twitter was, like, “Le Freak-ing out” about the situation. (Why has that phrase not caught on?) Things seem to be stable now, a year later, with signs of growth coming. Nothing crazy has happened to Green Flash or their brand Alpine. While the previous owners clearly made some bad business decisions and treated their partners and investors poorly, I haven’t heard that the current owners have done anything improper or questionable. In fact, my impression is that they are working hard to put the company back on a solid footing, to keep people employed and to stay local and independent of big beer. Beer quality seems to have increased, and they seem to be making smart business decisions. 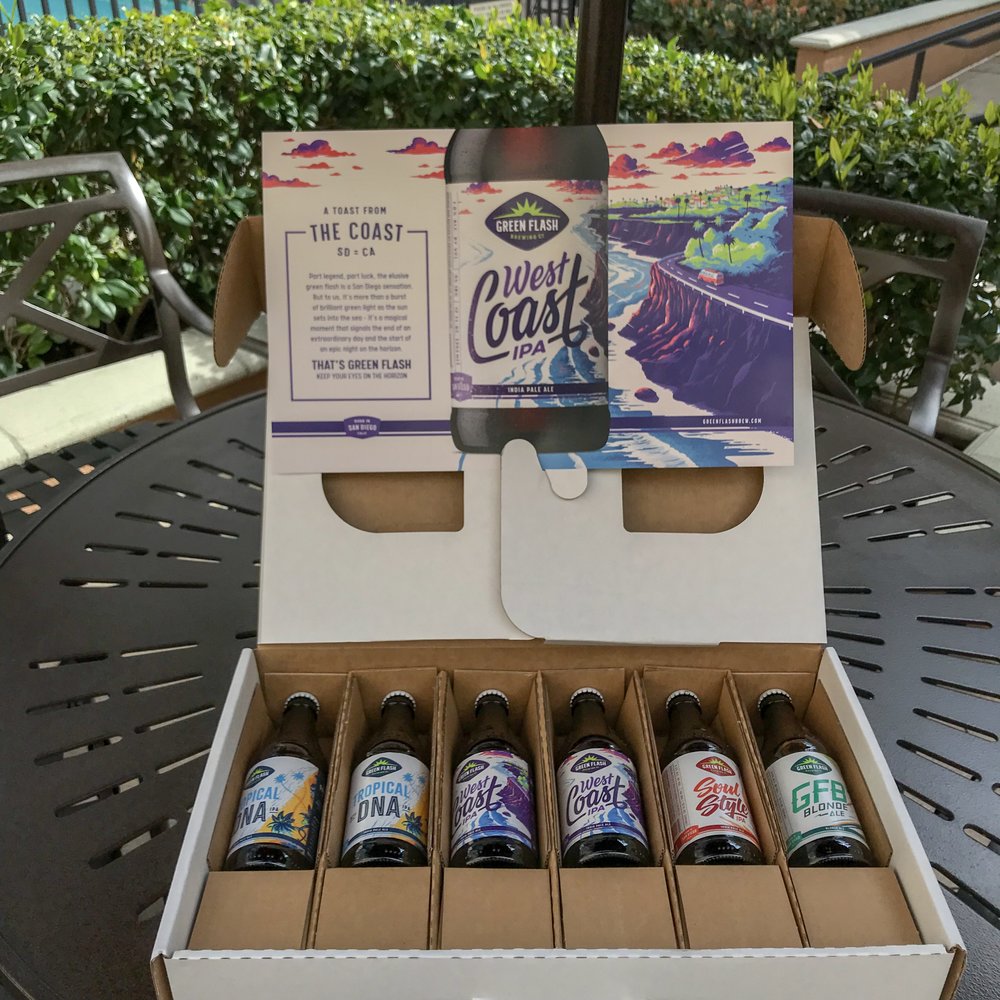 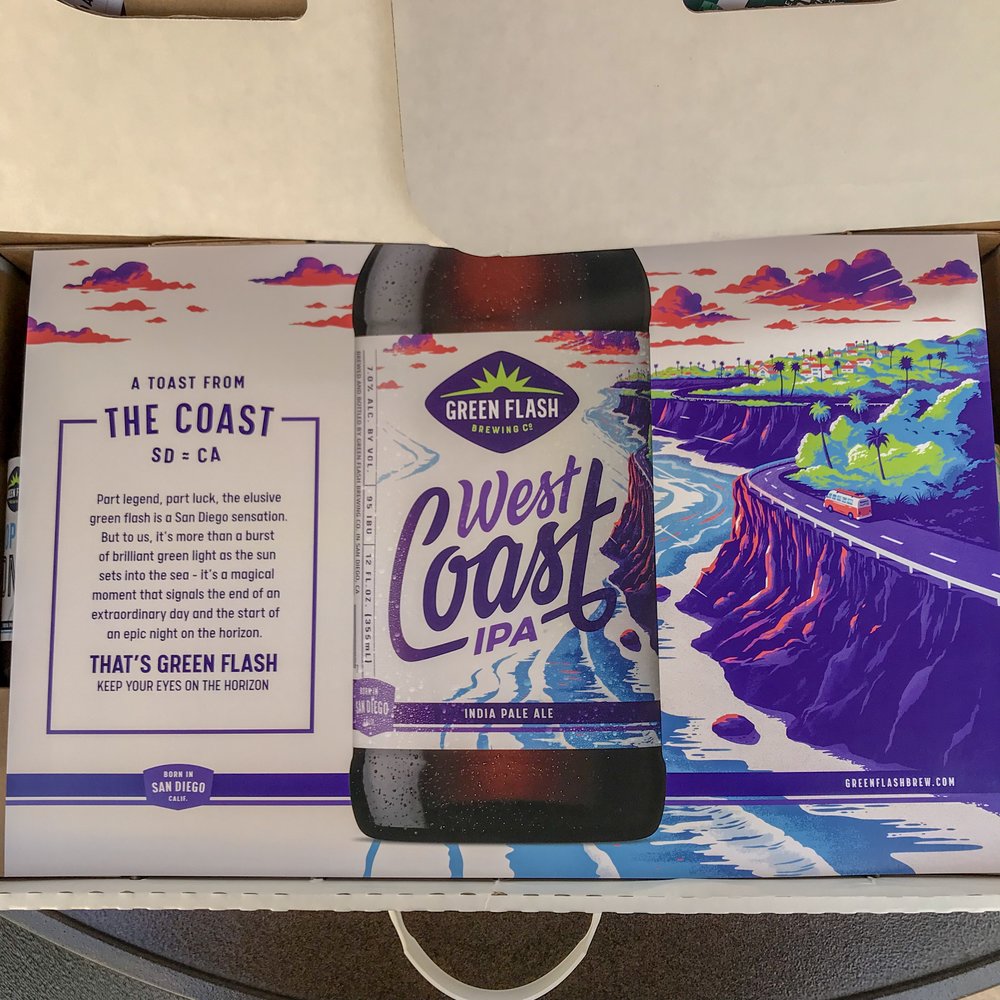 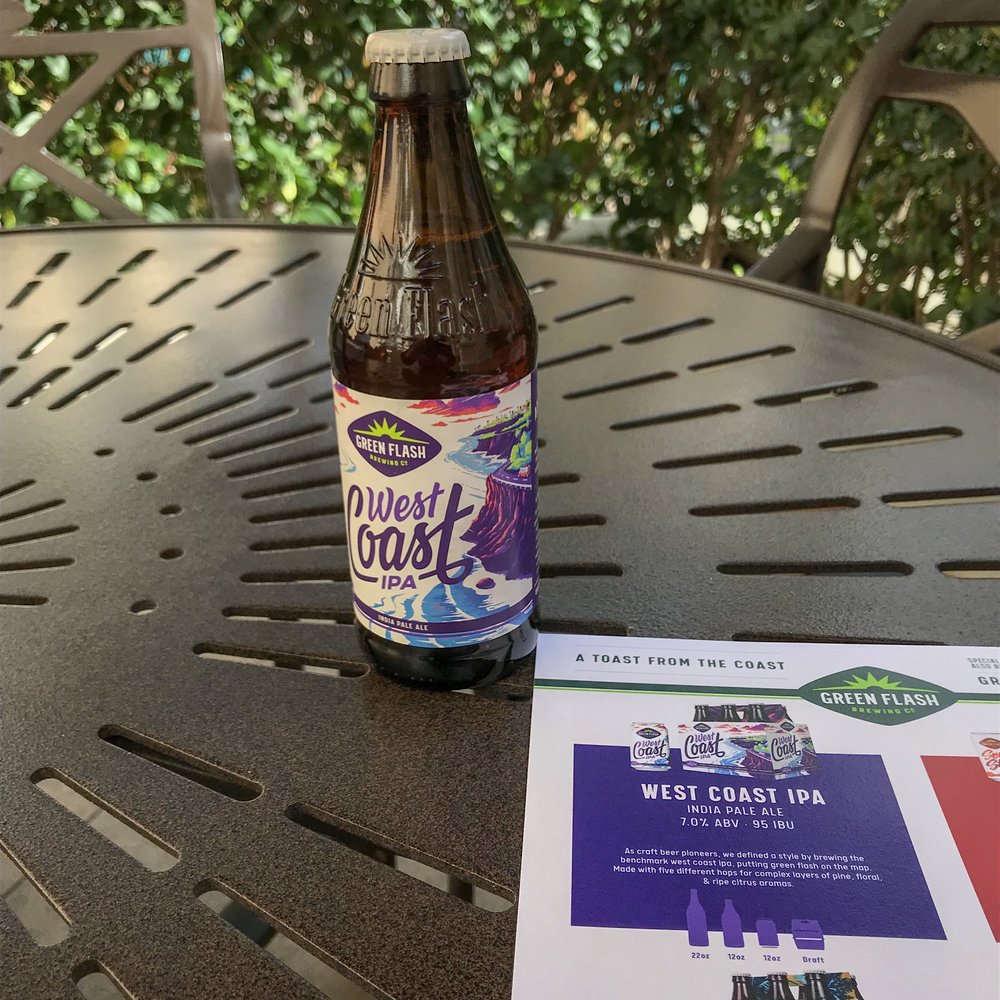 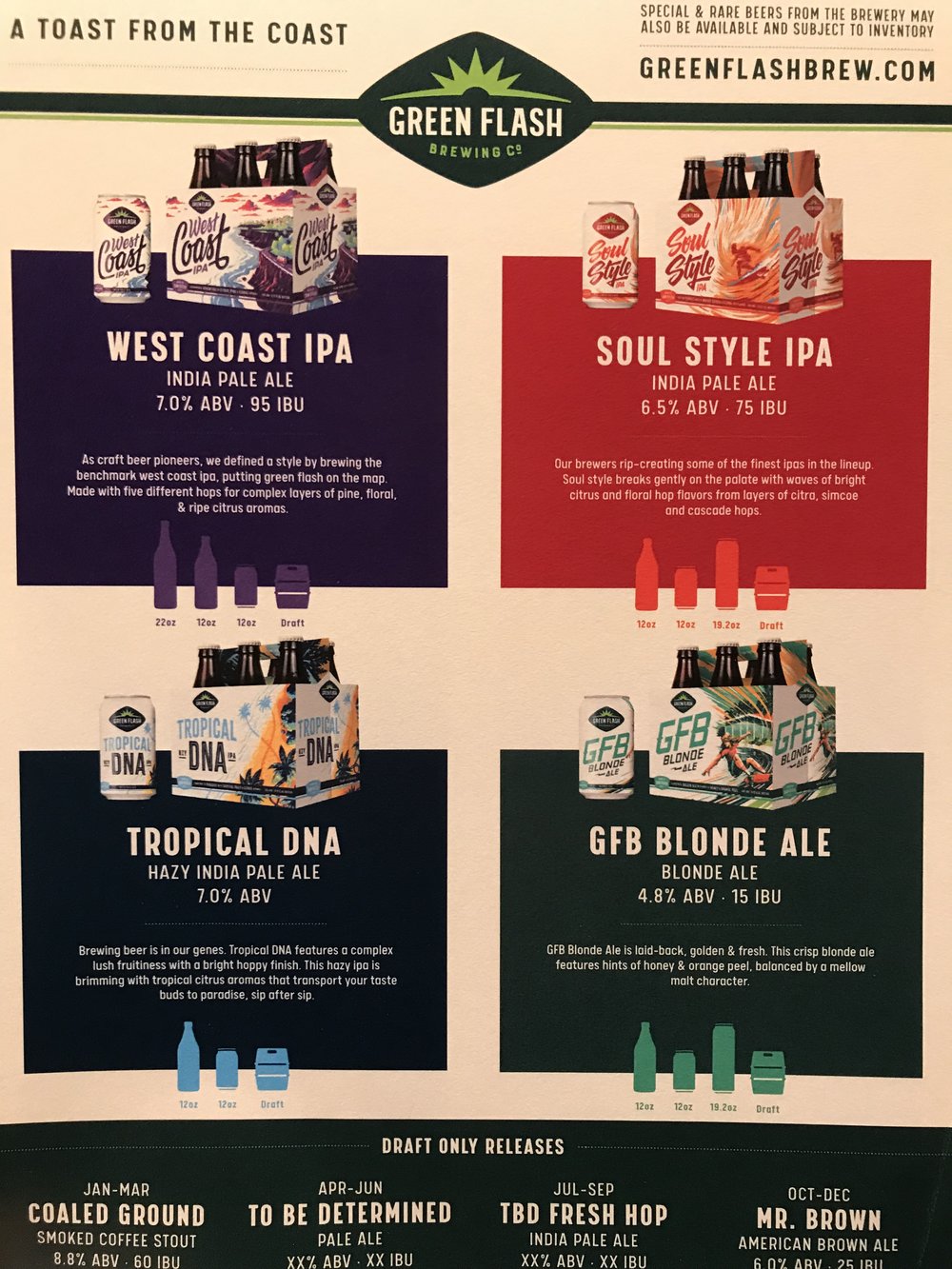 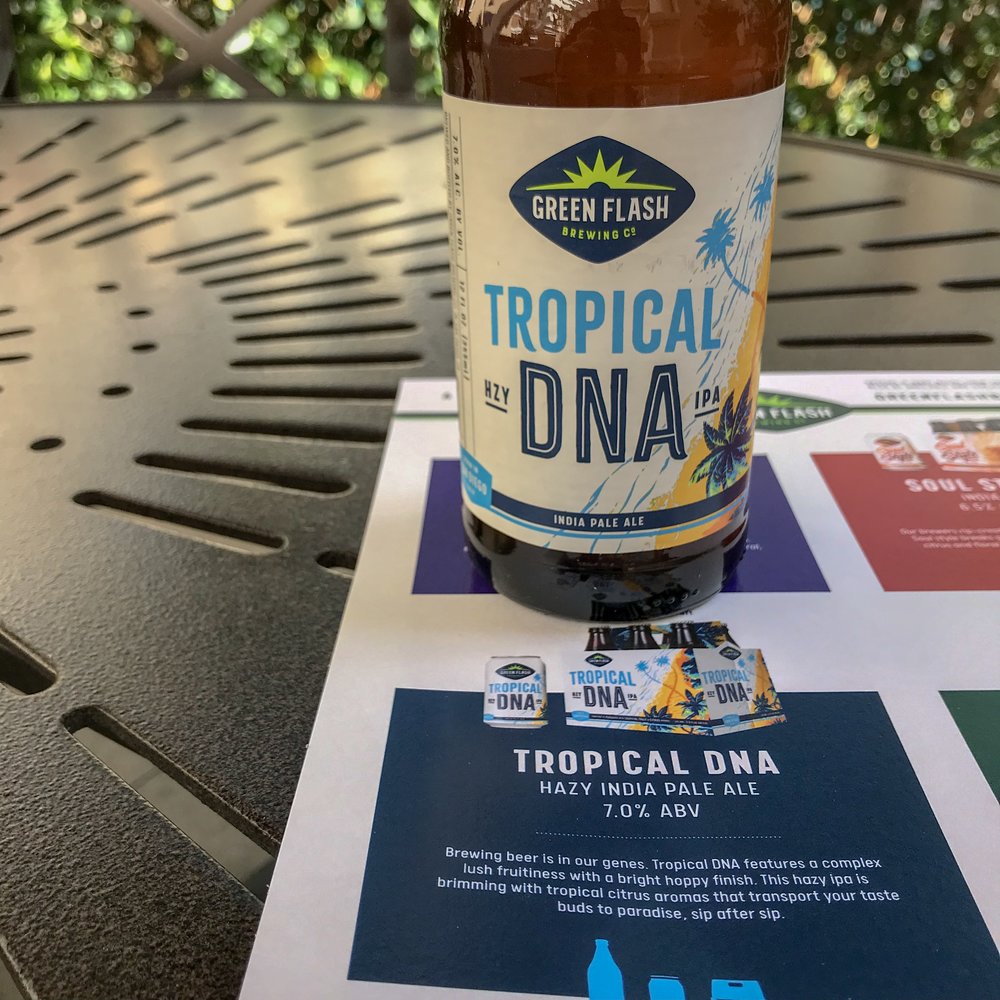 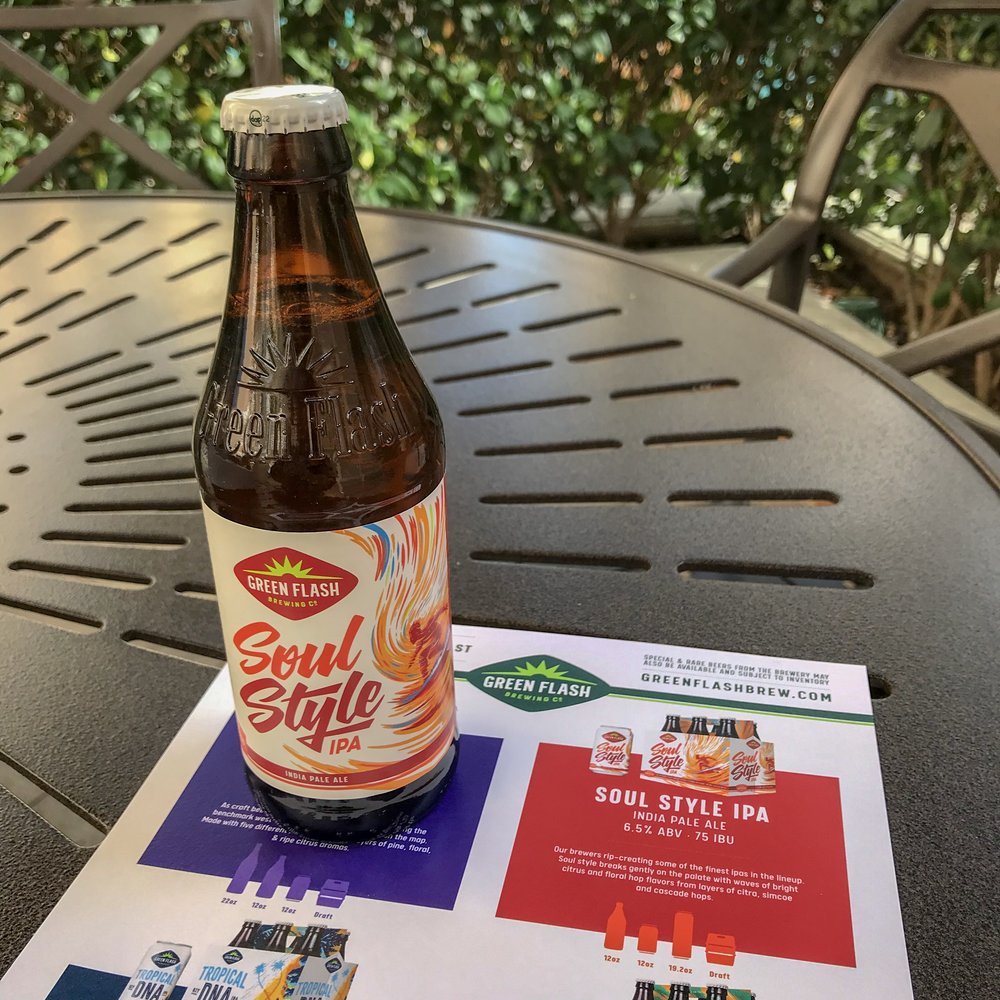 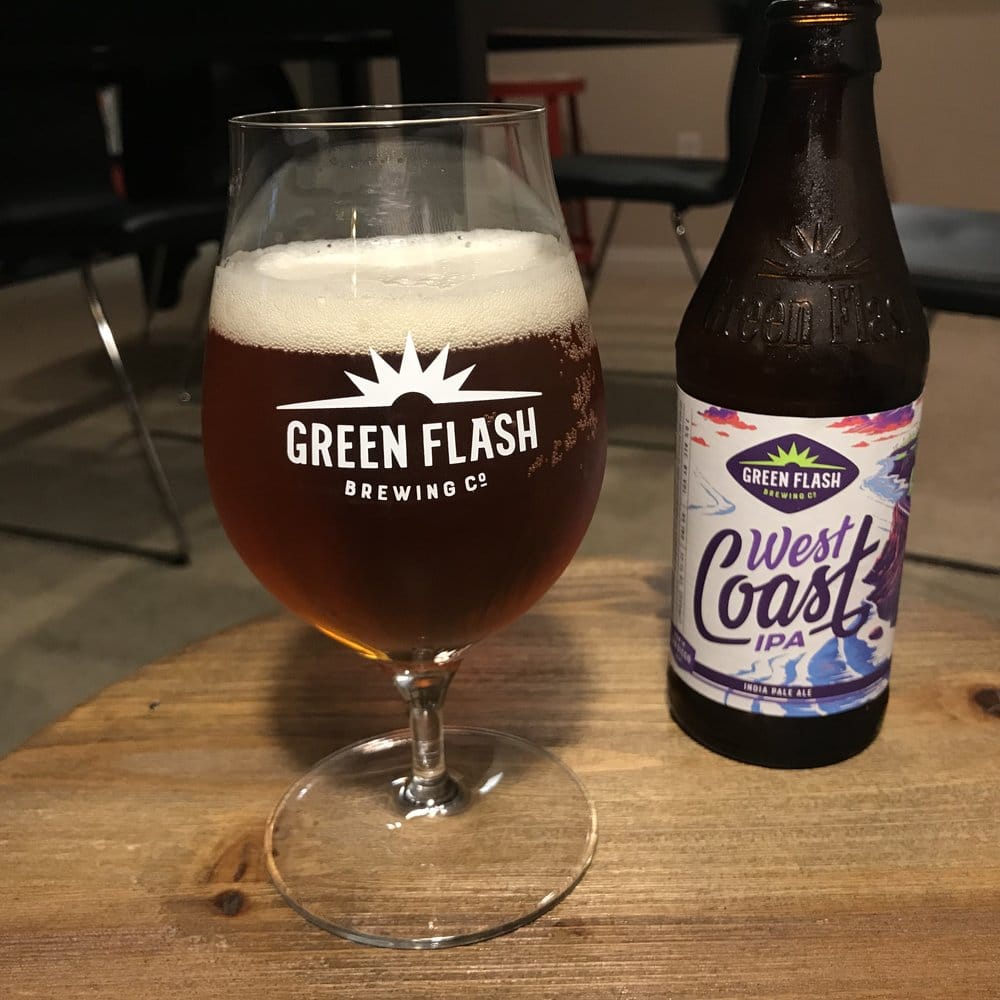 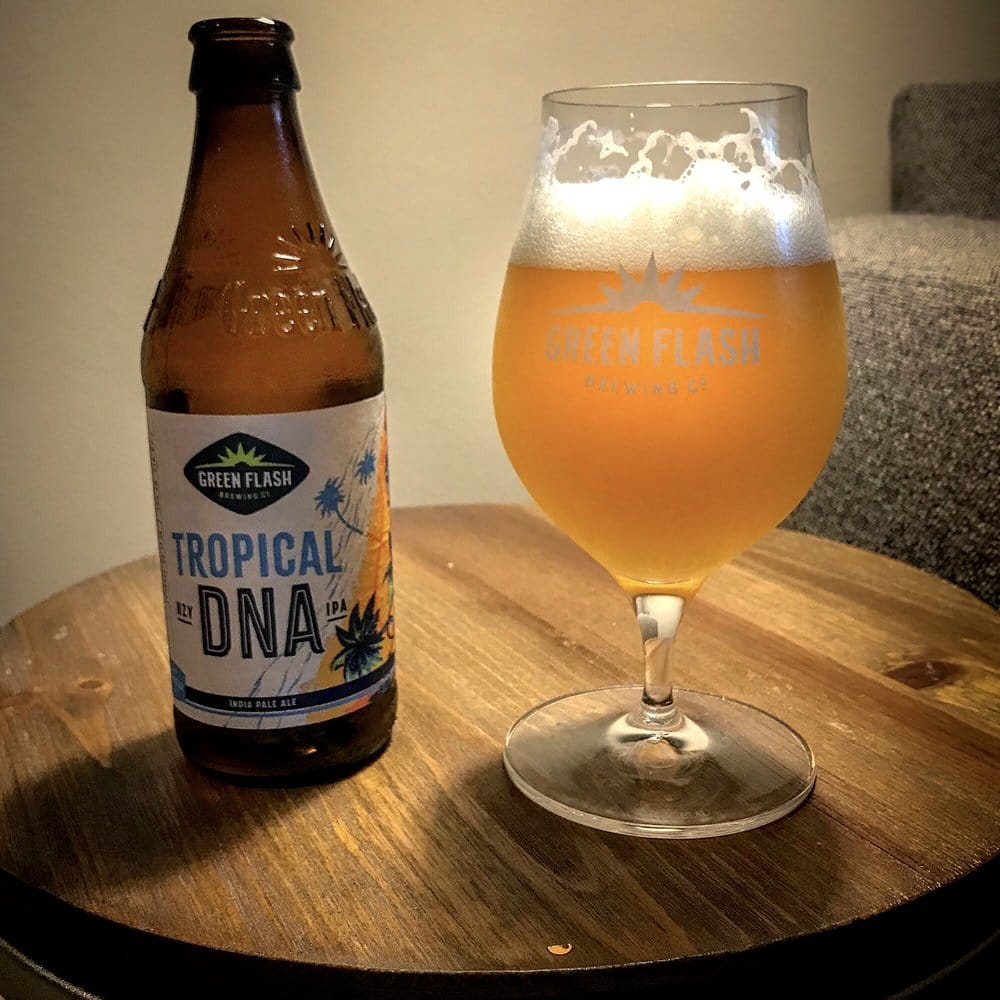 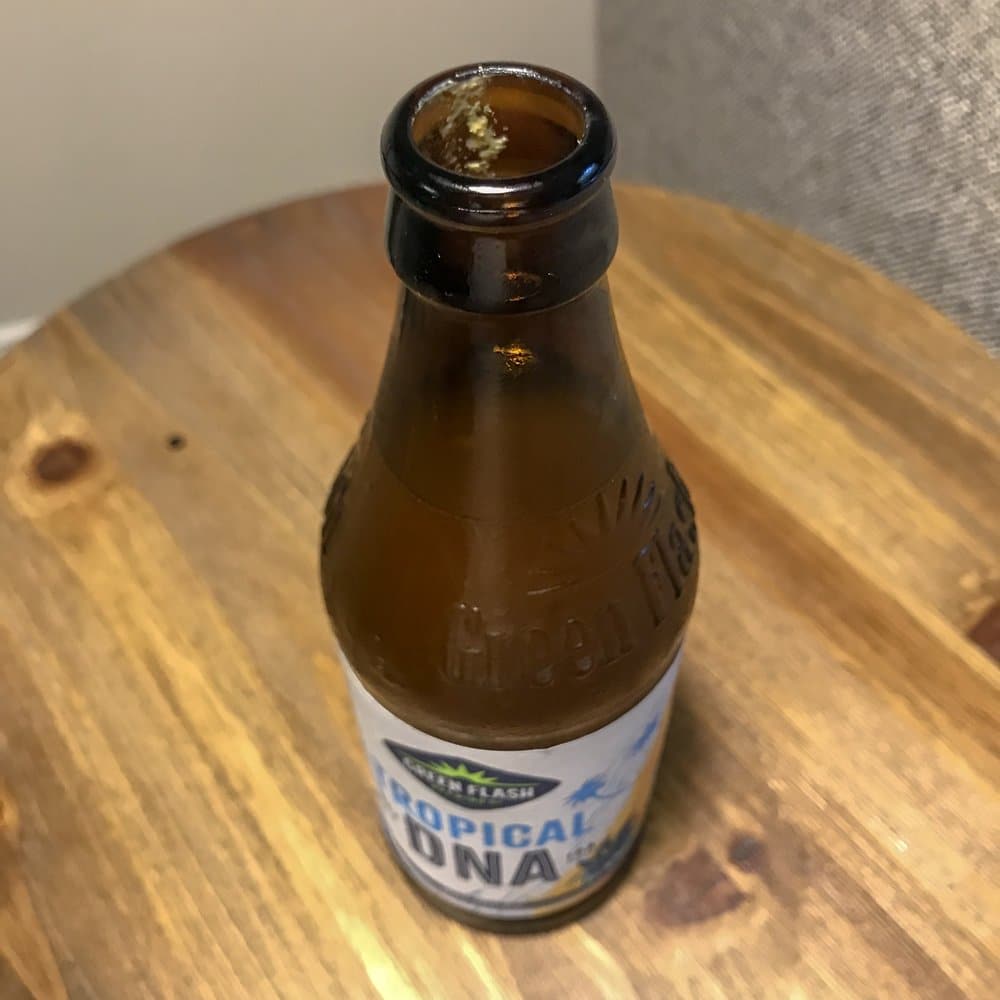 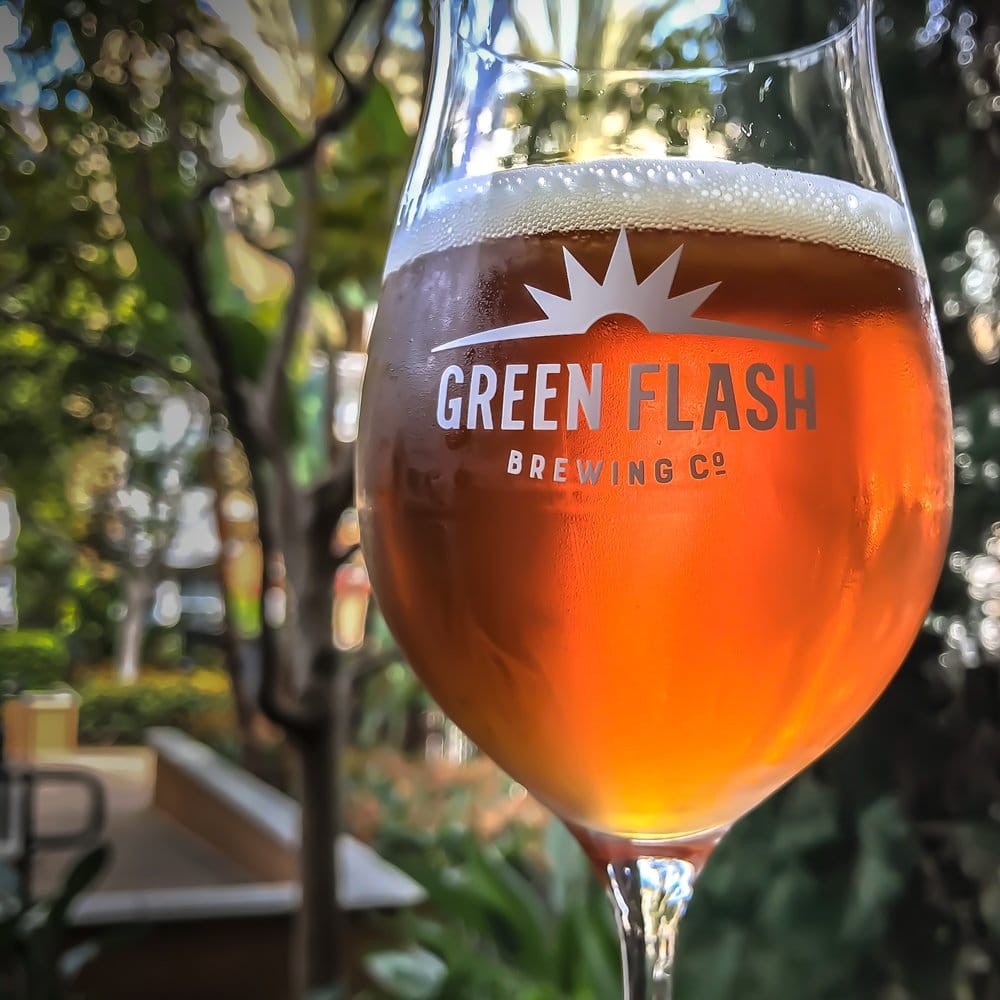 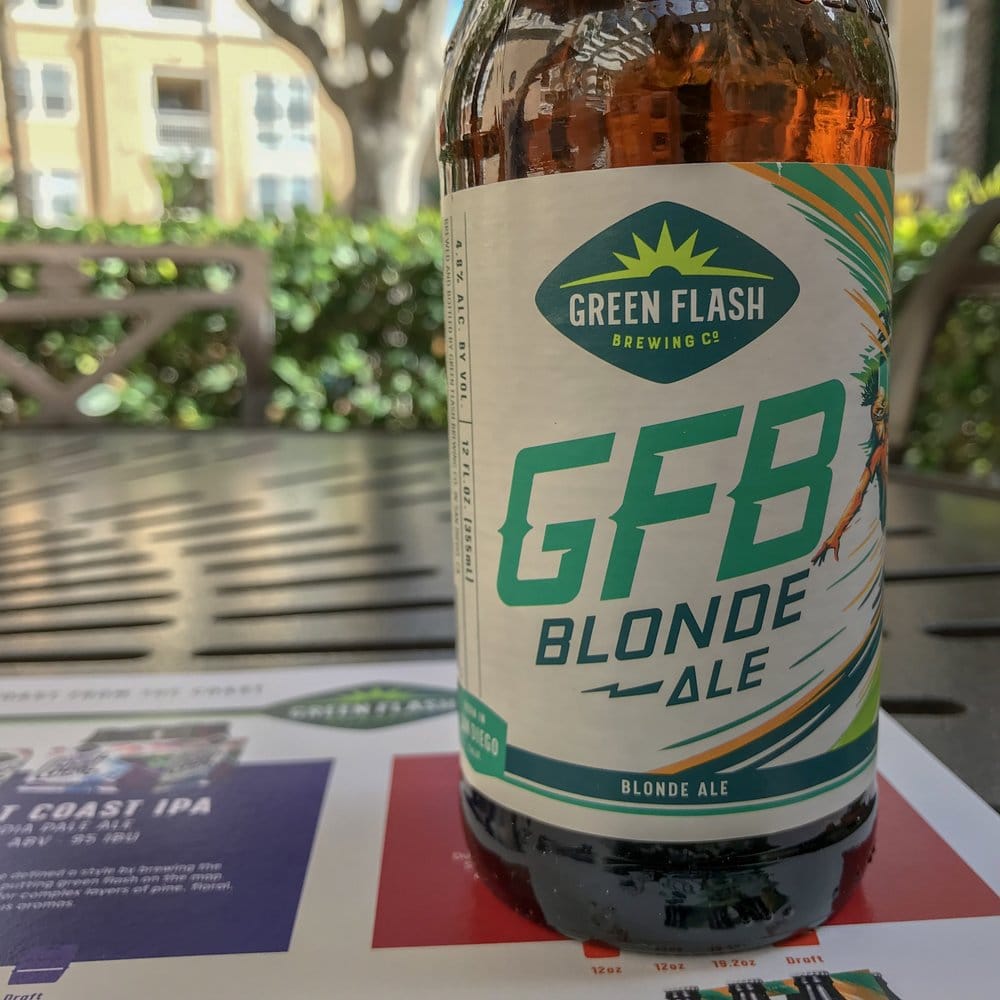 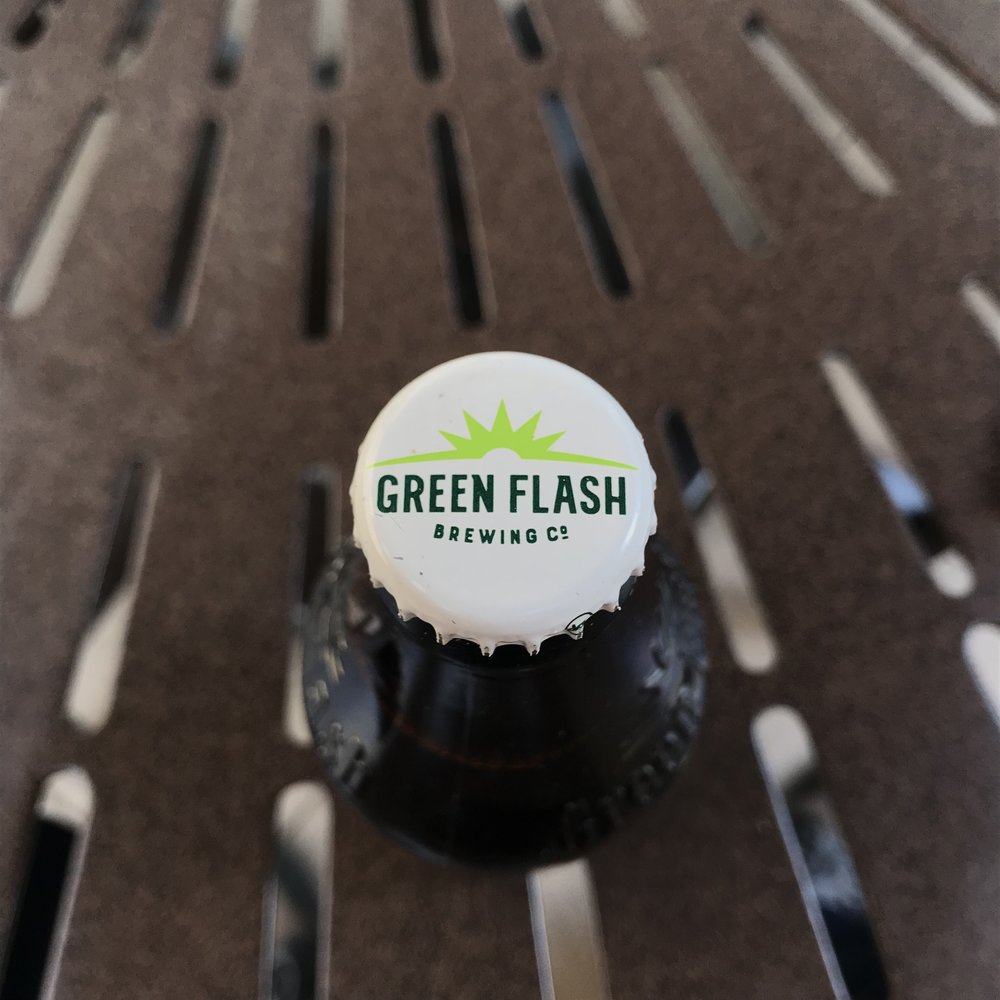 On the night of my visit, the tasting room was busy even besides the event I was attending. There was a good vibe from the crowd and the staff. There was an air of excitement in the place and patrons seemed happy to be there. Beer Twitter’s angst (over whether GF still counts as independent even though it is owned now by a private equity firm and is headed by an ex-AB InBev employee) was not in evidence.

After checking in for the event, they offered me a “walking around beer,” one of my favorite parts of a brewery tour. I had a sample of the Resilience just to compare it to other examples I’ve had around town (it was good). Then I had an IPA that wasn’t on our agenda for later in the evening (also good).

It has been so long since I’ve been to this location I can’t be sure, but it felt like they have added some additional seating near the entry and a few more tables and rails to stand at in the main room. My initial reservations about the bar staff on my original visit in 2017 were completely overturned on this occasion: This time, I received quick, friendly and informative service from two different bartenders while waiting for the special event to start.

The head brewer, Erik Jensen, gave us an informative and entertaining tour of the facility. The brewing operation is a lot bigger than I had consciously realized. After the tour, we got to try each of the four new core beers, which were paired with some delicious small bites. The CEO, Matthew Taylor, and several others spoke about the current status of the brewery, its plans, and this new branding launch. I was impressed with the enthusiasm, pride and knowledge evident in all of them. They clearly care about making Green Flash the best it can be. (And given the CEO’s comments, I am nearly certain that Green Flash is not the target of acquisition by a marijuana company as had been rumored a few weeks ago on social media.) All in all Green Flash treated us very well, and gave us six beers to take home, plus a glass and a shirt.

The focus of the night was sampling the four beers in the new core: West Coast IPA, Tropical DNA (hazy IPA), Soul Style IPA, and GFB Blonde Ale. In addition to these core beers, GF will add rotating special release beers. They are soon transitioning to cans for the core beers (cans and bottles both, I think I understood).

I didn’t ever try West Coast IPA in its original formulation back in the day (they stopped making it in 2013, a year before I moved to California), so I can’t say whether this new one is really the old recipe. I can say it is a good beer. Fruity/floral, bitter but not killer, maltier than most contemporary IPAs but balanced and tasty. Overall, I rate it 3.75/5, which is to say very good but not outstanding. That might be perfect for a core beer that is supposed to appeal to a wide audience. However, I’m not sure this beer is one that will bring new drinkers to the brand—hazebros will dismiss it as too malty, and new-to-craft people will think it is too bitter. But perhaps folks who haven’t had it for awhile will come back for the nostalgia and stay for the quality.

The new bottle shape is cool, kind of retro. I’m torn re: the art for West Coast IPA—it looks good but I feel like a non-beer person would assume it was grape soda or a wine cooler. (The colors in the other packaging don’t lend themselves to that interpretation, they are clearly beer.)

The other non-hazy IPA, Soul Style, is a real winner in my book, and my favorite of the night. I rate this one a 4/5, and if I saw it on tap somewhere I wouldn’t hesitate to order it.

The blonde, GFB, is a solid example of the style. The nose is fruity/malty. There is an interesting lemony/citrusy note on the finish. Blonde is a style I don’t find particularly exciting, so for me it is a 3.25/5 even though it is well made. Your mileage may vary.

The hazy IPA, Tropical DNA, comes in my favorite packaging of the group. It lives up to its name. Prominent tropical fruit and citrus on the nose and palate with a pleasingly bitter finish. Quite tasty. It is not as hazy or juicy as hazebros typically want, but it is very good for a mass-market version of the style. 7% ABV. 3.75/5

I had been hesitant about Green Flash since the change of ownership last year, but this event changed my perspective. I think they are on the right track. Check them out and let me know what you think.