How Many Breweries in San Diego? February 2020 Edition 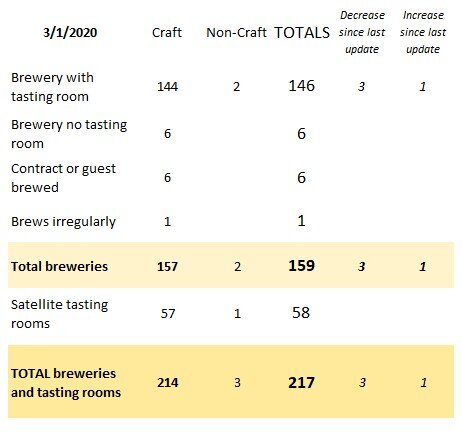 Here is THE LIST of breweries and tasting rooms. (As always, it is an Excel spreadsheet that is kept up to date whenever changes are announced, and you can sort it on business type, food, neighborhood, membership in SDBG, and date originally opened.)

By my count, 23 of the 157 craft breweries on The List are NOT members of the San Diego Brewers Guild—that’s almost 15% of local breweries you are missing if you are relying just on the SDBG list or map.

TapRoom Beer Co. finally soft-opened its North Park brewery in mid-February. It has been a long time coming. The anticipation has made people excited to visit. The photos I’ve seen look awesome.

On March 2, we learned of the finalization of the sale of Ballast Point Brewing that makes it a craft brewery again according to the Brewers Association definition. I have been counting those three San Diego brewery locations as craft since the sale was announced last fall, so no change to the list but now it is official: Ballast Point is Craft Again.

Melvin Brewing, in East Village, suddenly ceased operations on February 17, 2020. It is a gorgeous space with a kitchen and good-sized brewery: someone should jump on it right away.

Papa Marces Cerveceria announced on February 21 that it would cease operations on February 25, citing a lack of funding and the loss of its lease, according to West Coaster.

By the way, this means that 5 of the 9 Brewery Igniter spaces are looking for tenants (1/3 in North Park, 1/2 in Carlsbad, 1/2 in Miramar, and 2/2 in Oceanside), plus one more brewery (Rouleur in Carlsbad) projected to move out in about a year. Is the end looming for the Brewery Igniter model, or will Fenton realize it is over-charging for those spaces before they are all empty?

On March 2, Rock Bottom Brewery’s parent company closed the La Jolla location down (along with several others around the country).

Before you get too worried, there have only been three brewery closures in 2020 so far, which is very similar to last year and amounts to less than 2% of all breweries, and an equal number of locations have opened in this period, with many more announced for the near future.

Bay City Brewing has announced that their anticipated satellite tasting room/venue/pizza restaurant will open in East Village (around the corner from Knotty Barrel) in mid-March.

No date announced yet, but Hannegan’s House, in the South Bay area, has been posting to social media about its rapid build-out progress. They have a sign and a draft system now at least, so one can guess that this craft beer and craft ice cream business is within a couple of months of opening. Last year, based on the minuscule amount of information I had at the time, I had judged that they were not likely to open this year—I’m happy to be wrong. So, currently, there are at least thirteen more projects in planning that I judge to have a high likelihood of opening in the remainder of 2020.

West Coaster reports that financially-challenged Barrel Harbor Brewing in Vista will sell to home-brew-hero Nick Corona. The sale is set to close at the end of April and Corona’s Five Suits Brewing is currently planned to open in late May or June. It seems like an optimistic timeline, but I’ll keep you posted.

More good news: Co-Lab, a venture that in some respects imitates the Brewery Igniter, has signed up tenants Breakwater Brewing, a Wild Barrel Brewing spin-off called Barrel & Stave (the name is way to similar to nearby Stave & Nail) and a new location for Laguna Beach Beer Co. West Coaster’s article on it here.