How Many Breweries in San Diego? February 2018 Update. 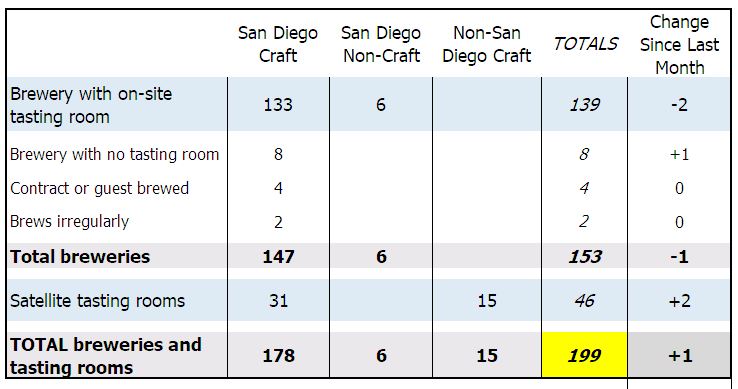 February 2018 monthly update of the best and most accurate list of #breweries and #tastingrooms in #SanDiego. #craftbeer #beer

Here is The List of all the breweries and tasting rooms in San Diego County.

This was an odd month of shuffling the deck chairs. Two breweries were removed from The List: one will reopen later in a new location, one was moved to the “brewery no tasting room” category and will move back to the “brewery with tasting room” list when their new location opens. Two satellite tasting rooms opened in the last 30 days: one entirely new, one in the location of a recently-closed brewery that will itself become a brewery soon. The result is a net increase of one location over last month’s total. Details below.

As mentioned last month, the end of 2017 saw four closings. But it was only a temporary fluctuation and now San Diego’s beer scene is back on a growth trajectory. In fact, two of the places that closed around the beginning of the year have already reopened or announced plans to reopen. We already knew that one of the former owners of Oceanside Ale Works has announced that he will reopen in the same location, likely under the name Irrational Ales. Now, La Jolla Brewing, which closed (suddenly, as it appeared from the outside), has reopened (just as suddenly) as Absolution by the Sea. Absolution by the Sea currently counts in The List as a non-San Diego Craft Brew Pub (similar to BJ’s, for example) since the new owners are currently shipping beer from the Absolution production brewery in Torrance, CA. Soon, though, Absolution will begin brewing in the La Jolla location and this location will become a San Diego Craft Brewery (according the categories I’ve created for The List).

The previously-announced closing of San Diego Brewing Co.’s North Park location has come to pass. The plan is to open a new brew pub soon, hopefully to coincide with the company’s 25th anniversary later this year.

Another North Park Brewery Ignitor tennant, Eppig Brewing, has now opened their second location, a tasting room on the waterfront next to a marina in Point Loma. It has already proven to be a big hit even though it is still just in a “soft opening” phase. It is getting a ton of social media action, probably because the photos of “beer with boats” are hard to beat; also, of course, because the beers are really good.

I was chatting recently with a bartender at the Mike Hess Miramar tasting room in the original brewery that has not been brewing for quite awhile. There have been new tanks sitting in the back for nearly a year and nothing has been happening. Now, a plan has emerged to renovate the location to create a more comfortable tasting room with a longer L-shaped bar, more and nice seating, and a new brewing set-up. Hess is waiting on construction permits and soon will get under way. The Miramar location will focus on brewing the smaller batches of specialty beers, allowing the North Park location to brew full-speed-ahead on the killer core line up the distribution of which keeps increasing. (Full disclosure: As I write, I am drinking a Mike Hess Habitus Rye IPA, one of my very favorite beers in the whole world.)

Because of their respective evolving and unusual situations, both Mike Hess Miramar and Absolution by the Sea now have two entries each on The List now: existing tasting room/non-San Diego Craft Brew Pub, respectively, and breweries in planning, each. That double-counting inflates the total numbers a bit (well, 1%), but it seemed the only logical way to get all the info into The List.

A similar duplicative case is Acoustic Ales, which currently has two entries on the list, too. A few months ago I had heard that Acoustic wanted to vacate their location next the airport and build a new brewery. I just noticed online that their tasting room next to the airport is now closed while they build a new one in North County. I don’t know whether they are currently brewing, or where, but I left them in the “brewery no tap room” section of The List for now since they do seem to be putting out new beer for distribution. And I have added them to the “brewery in planning” section as well. Latchkey Brewing is ready to start brewing at the old Acoustic Ales facility as soon as it is vacated, with plans for a renovation of the tasting room

The Depot Springs project in La Mesa was officially spiked in January. The building (apparently 70% finished), brewing equipment, and brewery license have all been put up for sale. We’ll see if any investors are interested in this very ambitious project. La Mesa is also served by Bolt Brewery‘s production facility and tasting room, and Helix Brewing, which just announced an expansion into the neighboring building.

I am currently aware of 26 breweries in planning and 10 tasting rooms in planning. If they all come to be (highly unlikely, admittedly), San Diego County will then have 232 beer locations (accounting for the three duplicate entries in The List right now). Currently, the number of operating locations sits (again) at 199.