How many breweries in San Diego? December 2018 edition 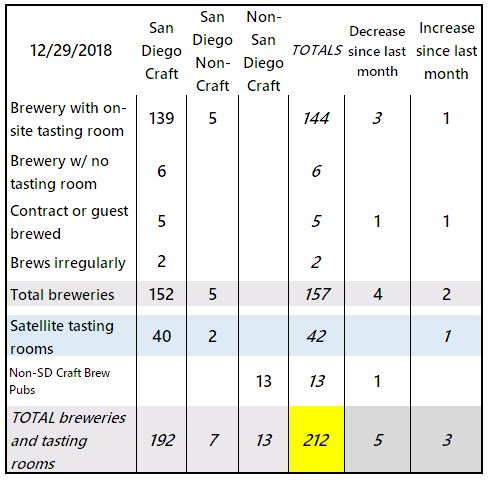 Despite the sad closing of two Council Brewing locations, Acoustic Ales not having current production, and a scare for Benchmark Brewing, the opening of Double Peak Brewing in San Marcos and the start of contract-brewing-while-it-builds-out for Harland Brewing means San Diego craft beer saw only a net decrease of 1 brewery in December 2018.

In a few days I will publish my analysis of San Dieigo craft beer in 2018. For now, here’s the regular monthly update. We stand at 152 craft breweries (-1 net compared to November), 5 non-craft breweries (-1 but that is book-keeping not a loss this month; see below), 42 tasting rooms (+1 for book-keeping, no real change) and 199 SD beer locations in total (-1 net). Overall, counting all locations (including SD and non-SD, craft and non-craft), there are currently 212 beer locations in the county (net -2). Deletions from THE LIST this month were Council Kearny Mesa, Council Santee, Acoustic Ales, and Oggi’s Chula Vista. Additions to the list this month were Harland Brewing and Double Peak Brewing. Ballast Point Scripps Ranch was moved from the non-craft SD brewery category to the non-craft SD tasting room category.

Near the beginning of December 2018, the San Diego beer community was shocked to hear two pieces of bad news. Groundswell Brewing, famous for their GABF-winning “Beer Flavored Beer”, had run into a rough patch and announced on social media they were seeking an investor or buyer for a cash infusion to hang onto their Grantville brewery. A couple of days later, Council Brewing announced they had decided to close down, shuttering both their original Kearny Mesa brewery/tasting room and their not-even-a-year-old brewery/tasting room in Santee. Hearts were broken to see Council go, and to see Benchmark in trouble.

Council’s final weekend was well attended. Even before that farewell weekend, they had made an offer to sell their large stock of bottles for $5 cash each and to donate the proceeds to the SoreEyeSudsMas food drive. Counci ended up donating over $14,000 to the cause, which is an impressive amount any time and is impressively selfless when their business was ending.

Benchmark has staved off closing their Grantville headquarters, thanks in part to the community rallying around and buying tons of their beer (to the point that in mid-December they had almost no beer left in stock; they’ve got plenty again now at both tasting rooms). Their lawyer played a big part, too, negotiating a deal with their landlord that will enable them to stay at their Grantville headquarters for the foreseeable future. Buy more of their beer and help them get back on solid ground.

Harland Brewing has begun operations. So far, they are contract brewing their beers at Bitter Brothers. They are in the process of building a brewery in Scripps Ranch, and a tasting room in Del Mar, both of which are scheduled to open in spring 2019.

I’ve heard that Latchkey Brewing has terminated its contract brewing arrangement with Acoustic Ales. According to communication via social media, Acoustic Ales north county brewery that was supposed to open in 2018 is still in “TBD” status but they are now saying it will open in 2019. For now I’ve removed them from my list as an active brewery.

The Oggi’s location in Chula Vista closed down this fall, somewhere around October from what I’ve seen online. Except for the Carmel Mountain Ranch location, the Oggi’s brewpubs around town don’t brew on site any more and are instead supplied by San Clemente’s Left Coast Brewing (owned by the same family that franchises out Oggi’s locations). That means we are down one non-SD craft brewpub.

Two changes to this month’s numbers are really the same change and are really from months ago, I just didn’t know till now. Ballast Point moved all brewing operations (and brewing and office staff) from their Scripps Ranch location to the main Miramar brewing campus. The Scripps Ranch location still functions as a tasting room and kitchen, but it is no longer a brewery. That’s -1 non-craft brewery and +1 non-craft tasting room.

Gravity Heights will open in Serrento Valley in January 2019.

Kairoa Brewing is launching in January 2019.

Similarly, 13 Point Brewing in Lemon Grove has started brewing and in November posted that they hoped to open before the end of the year but said they would not open before they were fully satisfied with their beer quality. (Good sentiment, but I’m eager to visit.)

The Mike Hess Imperial Beach tasting room is scheduled to open in January 2019, though final dates have not been announced yet.

I am aware of a total of eightteen breweries and fifteen satellite tasting rooms that are in planning. I judge about 30 of those 33 projects to have a high chance of actually opening in 2019. That would represent 15.1% growth over the current 199 craft beer locations in San Diego County. We’ll see if that comes true, and how many closures happen along the way.

In 2016, several news outlets around town announced that Mission Brewery was opening a tasting room in Pacific Beach. That project did not and will not happen. I heard from the brewery that they briefly considered a Torrey Pines location, too, but it also fell through. So, that one is removed from the tasting-room-in-planning list.

Mike Hess Brewing had been planning to set up a new brewhouse at the Miramar tasting room for some time. It is their original brewing location but it has just been a tasting room for several years. They changed direction, though, and sold the brewhouse that was sitting there idle to AleSmith. As part of the deal, Mike Hess will guest brew one small batch per week at AleSmith. That’s -1 brewery-in-planning but no change to existing breweries or tasting rooms.