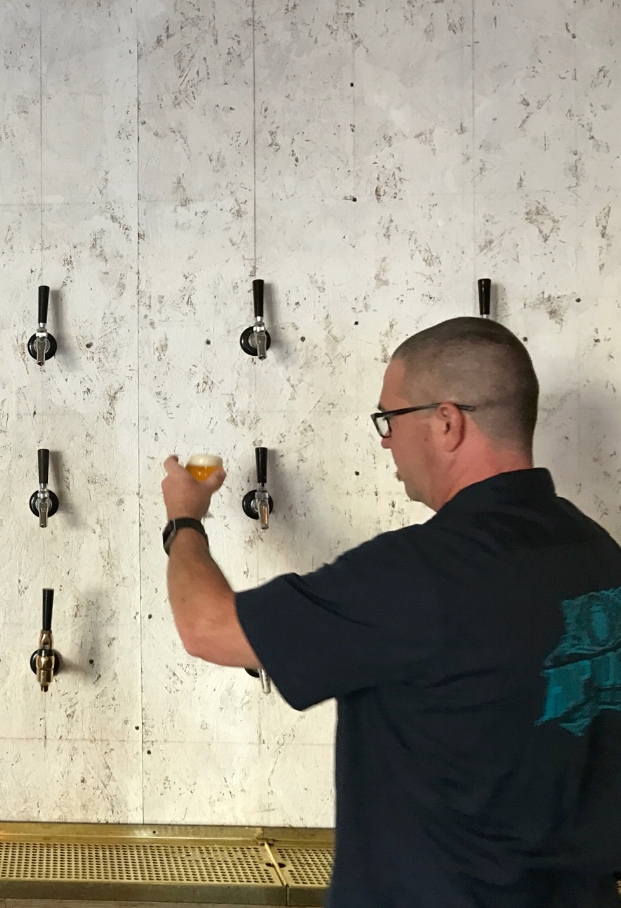 Located inside The Homebrewer on El Cajon, Home Brewing Co. is a tap room that makes some great beer, and the people who work there are eager to share their craft beer knowledge.  RECOMMENDED

Home Brewing Co. is the tasting room inside The Homebrewer, one of San Diego’s best-loved brewing supply stores. Although this place started as and still does most of its business selling home brew equipment and ingredients, they also pour up to 18 taps of beer they make on site. They often do “split barrel” work to showcase for home brewers (and beer lovers in general) what differences ingredient or technique alterations make to beers–for example, what two different hop varieties can do in the same base beer. It is a cool way to learn quickly. Home brewers will also be pleased that Home Brewing is “committed to open source brewing”: they post all of their recipes and brewing notes online at homebrewingco.com.

Every beer I had here was good; some of them were very good. But the best part is that the wonderful people who work there are eager to talk about brewing, their store and the SD brewing scene. They are generous with their time and their knowledge. From the plaques on the wall, it looks like all of them have some level of Cicerone certification.

Parking in North Park is no picnic, but by some miracle I got the parking meter directly in front of the store. Try parking north rather than south of El Cajon for more options, but beware that El Cajon and Kansas St is one of the deadliest intersections in the city for pedestrians. As your mom told you, wait for the light and look both ways. Crossing six lanes in darkness, particularly under the influence, is not to be undertaken lightly!

In addition to the tasters I ordered, while we were chatting founder George Thorton let me try a couple of splashes of some other things. I don’t normally like gose or sour beers in general, but theirs is light, crisp, almost champagne-like and refreshing—still not my thing but certainly the best of that style I’ve had. I wish they had had more of their Schwarzbier; I got the very smallest taste right at the end of the keg (and it was still good).

Talking with George and Scott, who works there, was awesome. I asked Scott if he knew how much caffeine gets into a coffee beer and though he didn’t know he went and asked the other people working on the home brew side and came back with the recipe so we could know for sure. (There’s one ounce of whole beans in five gallons of beer, so even if all the caffeine was extracted from the beans, the beer wouldn’t be very caffeinated. Just delicious.) George and I traded opinions about which craft breweries we are liking right now, talked about the terrible homelessness problem downtown, reminisced about childhood Star Wars memories, discussed the impact of successful craft breweries “selling out,” and he casually taught me a lot about the beers I was sampling. George is the instructor for SDSU’s Beer Styles course—now I’m even more eager to take some classes from SDSU’s Business of Craft Beer certificate program.

Caffeinator (Dopplebock with coffee, 8.6% ABV). The addition of Modern Times coffee to their doppelbock brings it to a whole new level. The coffee flavor and aroma is prominent without being overwhelming: you can still taste the malty backbone of this beer. 4.25/5

Sharks with Lasers (IPA, 6.4% ABV). This one was less aggressive than I was expecting given the name and menu notes. The hops aromas hit me even as my bartender was putting down the glass in front of me. It pours clear golden and tastes “juicy.” Lovely.  3.25/5

Lost Luggage (American Porter, 5.6% ABV). I was caught up in conversation and forgot to make notes on this one, but it was good.

Harvey the Bunny (Dry Stout, 4.2% ABV). Ditto. I liked the stout a bit better than the porter.

It’s a Stout! (10% ABV). With apologies to Admiral Ackbar. This was creamy, smooth, roasty and tasty. There were some raisin/brandy notes on the finish. 4/5

It is pretty rare for me to find a place where I can rate more than one beer at 4 or higher. That tells you the quality at Home Brewing Co. is great.

The tap room is small but has several seats at the bar and a few chairs and tables. Further enhancements to the room are in the planning stages. I hope they keep the Star Wars memorabilia.

I have to thank my readers, Chad and Chris, for pointing out to me that Homebrewer contains the Home Brewing Co. tap room and for encouraging me to visit. They were right: Home Brew Co. is run by great people who brew great beer.

West Coaster Magazine did a piece on Home Brewing Co. in 2015.