How Many Breweries in San Diego? October 2019 Edition 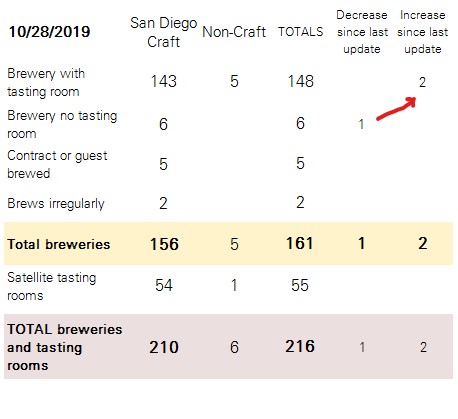 In October 2019, one brewery opened (Eppig in Vista) and one brewery changed categories from “no tasting room” to “with tasting room” (Harland in Scripps Ranch). There are now 156 craft and 5 non-craft breweries in San Diego County (net +1), 54 craft and 1 non-craft tasting rooms (no net change), for a grand total of 216 locations (net +1).

Eppig Brewing hosted an industry night on October 9, 2019, and soft-opened their new Vista production facility on October 11. That’s +1 brewery, but it is a temporary bump until their original North Park location closes in December. Here’s my blog and Coast News column about this excellent new location.

Harland Brewing opened a tasting room at their Scripps Ranch brewery on Monday, October 21. No net change here, it just moves categories from “brewery no tasting room” to “brewery with tasting room.” I visited during their first week, and they are already very good.

Pure Project confirmed that their second tasting room is on track to open in Carlsbad in spring 2020. I recently went to their first satellite tasting room, Pure at the Park, and loved it. With Eppig, that’s two Brewery Igniter success stories. More to come with Rouleur?

Lost Abbey’s new satellite tasting room (their second after The Confessional in Cardiff) will open in the lovely San Elijo Hills Towncenter (technically part of San Marcos) on November 1, 2019. Be excited, this one will be a great spot in a great area. They are also finalizing a lease on a tasting room in downtown San Diego’s East Village, probably to open in about nine months.

On Nov. 8, 2019, Dogleg Brewing will soft open next door to the new Eppig location in Vista, just down the block from Helia Brewing. That will make a nice little brewery crawl. And even before November begins we know that the November list will be +2.

I met Douglas Hasker at the Eppig industry night. He is the famous lager expert who brewed at Gordon Biersch for 29 years before it shut down in summer 2019. He told me that Puesto Cerveceria, in the old GB location in Mission Valley and where he will again be head brewer, is on track to open soon, probably October or November and certainly before December. He has a few test batches on the go now.

Cismontane Brewing Co. of Santa Ana recently appeared on the San Diego Brewers Guild’s list of members. I did a little digging and DMing, and they are part of the ownership group of Beverage House (originally announced as Kno Beverage House) in Escondido. I’m still gathering info on whether this will count as a non-San Diego craft tasting room, a bar, or something else. It will open “soon” according to a DM.

According to an email, Bay City’s East Village tasting room should be open before the end of 2019.

Together with TapRoom and Hoponymous Brewing, I count four breweries and two tasting rooms highly likely to open before the end of the year.

Not “soon,” but coming: Pizza Port will open another brewpub, this one in Imperial Beach. This project was announced in West Coaster on being in early planning stages as of the end of October 2019. So maybe opening summer 2020?

What Does SCOBY Do? JuneShine Hard Kombucha, Scripps Ranch