How Many Breweries in San Diego? March 2019 Edition 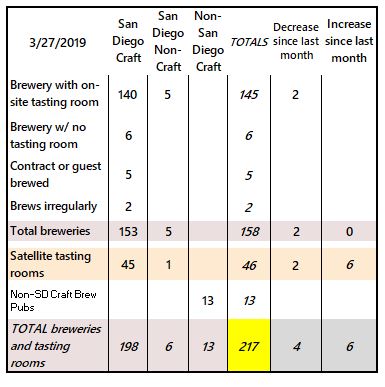 Monthly SD brewery update: February saw no changes, but March has NINE additions and deletions to the list of breweries and tasting rooms. There are now 198 SD craft locations and 6 SD non-craft. From the available info, I predict an additional 29 locations by the end of 2019.

February 2019 had zero changes over January—no openings, no closings. March, however, was a busy month: three new tasting rooms added, and two breweries and two tasting room deleted. Cleaning up the list, I’ve changed the way tasting rooms for guest/contract breweries are listed, which creates the impression of two new tasting room locations though they have actually existed for a long time. San Diego County is now home to 158 breweries, 46 satellite tasting rooms, and 217 beer locations in total (net +1 over January). In addition seven new projects have been announced in the last two months. I expect about 29 more locations to open before the end of 2019.

NEW FEATURE: The LIST of breweries and tasting rooms is now available as a sortable spreadsheet.

(1) Mike Hess Brewing is in soft opening at their third San Diego tasting room, in Imperial Beach. Hess now has five locations including the brewery in North Park, the original location in Miramar, plus tasting rooms in Ocean Beach, in Imperial Beach, and in Walnut Creek, near San Francisco. They make some of my favorite beer (hello, Habitus Rye DIPA!). The new location is just off the beach, offers tacos and a large outdoor area with games, and it is kid- and dog-friendly.

(2) SouthNorte beers are now available at the main Coronado Brewing location in Bay Park (technically Bay Ho, but no one seems to use that name). This one is a serious challenge to my classification system. Skip to the next paragraph if you don’t care about such details. I count SouthNorte as a “guest brewing company” since, while they are owned by Coronado Brewing Company and brew on CBC equipment in Bay Park, they are a separate company. Their brewmaster, Ryan Brooks, makes their flagship beers in San Diego, but has also opened a second SouthNorte brewing operation in Tijuana, at the Telefonica Gastro Park where they do smaller batch beers. All of SouthNorte’s beer is excellent, by the way: their Agavamente Mexican lager with hibiscus and agave nectar deservedly won a GABF medal within months of the creation of the company. Anyway, SouthNorte isn’t just a brand of Coronado, as Hop Concept is a brand of Lost Abbey, or as Owl Farms is a brand of Booze Brothers, since it functions independently. Hence, I call it a permanent guest brewery, at least as far as the San Diego location goes. But how do I categorize the new tasting room situation? A guest brewery with a tasting room? A new tasting room in an existing tasting room that happens to be the location of the guest brewing? A guest brewery’s guest satellite tasting room? Hell, I don’t know! I’m just going to continue to count it as a guest brewery and and a satellite tasting room. It is duplicative in a way, but will cease to be so if SouthNorte ever moves into its own brewery (and keeps handles at Bay Park).

(3) Knotty Barrel in Rancho Peñasquitos soft opened on March 11, 2019. In addition to a full kitchen and a full bar, this will serve as a tasting room for Knotty Brewing of East Village.

Considering the SouthNorte case has made me think more about the contract breweries in general. High Spot Beer Co. is the house brand for Bluewater Grill. I have added the Carlsbad and Coronado restaurants as satellite tasting rooms for this brand. It is not a perfect arrangement, but the case is similar to Hodad’s, Ketch and SouthNorte, so for consistency I’ve made this change.

The swift and vicious internet backlash to a tone-deaf/racist Facebook post from the owner of Reckless Brewing has caused him to decide to close at the end of March. You can see Beth Demmon’s illuminating post on the subject here.

Barrel Harbor is closing their tasting room/tabletop gaming space next to At East games in Miramar. Apparently they’ve been operating at a loss there since they opened in 2016. West Coaster has a piece about it here.

The Ballast Point Scripps Ranch location has had its farewell party in mid-March and the tasting room has closed. Brewing ceased there last year. JuneShine Kombucha is moving in to that location this spring/summer.

Align Brewing in the Miralani Makers District is up for sale. In a special announcement on Instagram the owner/brewer explained that he is moving to Hawaii to start a production brewery with an existing Hawaii-based brewery (no details announced yet) and that May 11, 2019, would be the Align 2nd Anniversary/Farewell Party. Align is there up for sale. (There had been a recent news item that Align was considering a new production brewery in San Diego, but that plan either changed or was misreported.)

I count seven new announcements of soon-to-open breweries and tasting rooms since January. That brings the total to 36 projects in planning, about 29 of which seem likely to open before the end of 2019. It is going to be a busy nine months!

Original 40 will open a brewpub in North Park; the January announcement I saw said that would happen in March, though a social media post I saw hints that it might be more like mid-April.

Beerfish, a craft-beer-focused seafood restaurant in North Park is going to challenge my classification system, too, since they are opening a brewhouse on site but will operate it with a rotating cadre of guest brewers. It is an intriguing concept, though I am slightly concerned about consistency and quality if brewers don’t have a chance to learn the system. I think I’ll just count them as a brewery-with-tasting-room and put a note in the comments section.

Invoak Brewing and Blending has started gathering barrels of wort to age in its Miramar facility, but it likely won’t be serving those beers until 2020. The business model seems to be similar to the smash-hit Horus Aged Ales, but focused on sour beers.

Creative Creature will open a tasting room in East Village, co-located with Red Hat Coffee. The West Coaster article announcement said they would be open later this year.

West Coaster says Two Roots Brewing is planning a tasting room in East Village, but I have been unable to find any details about it.

The Karl Strauss project in Santee passed a major hurdle when they made a deal with a local environmental group that had been objecting to the plans. A functioning brewery on that site is probably at least two years away, however.

Little Miss Brewing is looking for a site in La Mesa for their fourth tasting room.

The Black Market Brewing brewpub should be open soon in the College area near SDSU. The latest info I can find is an Instagram post where they say, “hopefully April-May.” Black Market is another challenge to my classification system since they are actually based in Temecula. But they plan to brew at this location so they will count as a San Diego craft brewery, just like CAVU and Melvin that are also headquartered outside of San Diego County. By the way, Black Market has three GABF medals since opening in 2010, including in gold in the Hazy DIPA category last year, one of the categories with the largest number of entries.

Guadalupe Brewing’s tasting room in downtown Vista must be almost open by now? They must feel like they are living Zeno’s Paradox of Motion, always getting closer but never crossing the finish line.

Harland Brewing has been posting stories to Instagram of the build out of their (huge!) warehouse space and the installation of their (very large) brewing system. The brewery is being constructed in Scripps Ranch and looks like it should be ready by summer. Their beer is already being contract/guest brewed and is in distribution at bars in the area.