How Many Breweries in San Diego? May 2019 Edition 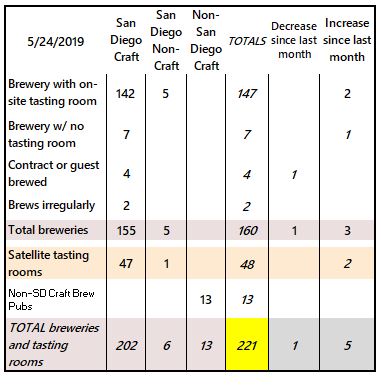 MAY UPDATE: 14 pieces of news related to brewery and tasting room openings and closings in San Diego from the last seven weeks. Breweries = 160 (+2), tasting rooms = 48 (+2) for a total of 208 (plus 13 non-SD craft brewpubs). #craftbeer #sdbeer #sandiegobeer #instabeer

I didn’t post an April update. There was just one April opening: The downtown Vista tasting room for Guadalupe Brewing is finally in operation. I’m happy for them, it took awhile. (That’s plus one tasting room.)

NEW FEATURE: The LIST of breweries and tasting rooms is now available as a sortable spreadsheet.

Apparently I Missed One

According to a West Coaster article in mid-May, Prohibition Station, a tasting room of Prohibition Brewing, has been operating in the former Fallbrook Brewing spot since February. I had heard that was in the works, but didn’t realize it was already open. (That’s plus one to the tasting room list.)

Temecula’s Black Market Brewing opened their College East brewpub near SDSU in late May. (Plus one brewery.)

Harland Brewing Co. has started (as of May 23) brewing at their Scripps Ranch brewery. The tasting room there will open later this summer, and there are also plans to open another tasting room in Del Mar later this year. (This is one brewery open, one contract brewery closed.)

Carlsbad Brewing Company opened the weekend of May 24 in the Bressi Ranch neighborhood of Carlsbad. I had never even heard of this brewery, so I was surprised. This is the brewery for Acoustic Ales, which has been without a location since they moved out of their spot at the old Mission Brewery Plaza a couple of years ago. CBC and AA will be two brands of one company, like Port Brewing and Lost Abbey.(Plus one brewery, though technically the brewery will not be operating until later this year: they are still brewing AA beer at their old location and CBC beer is not yet for sale. But this location is also an excellent craft beer bar with an extensive guest tap list and bottle list.)

Not newly opened, but newly rebranded: the former Helm’s Brewing tasting room in Ocean Beach has finally been re-branded to Two Roots Brewing (who purchased Helms in spring 2018). Sorry, none of the Two Roots’s cannibis-infused beers are available at this location, even though that would be very “on brand” for Ocean Beach; only at legal dispensaries.

Stave & Nail is a venture by the head brewer at San Marcos’s Rip Current Brewing, and will be located right next door. Good write up from West Coaster here. They were due to open for the Memorial Day weekend (i.e., today), but I see no online confirmation of that fact. Stave & Nail is a curious case, but one that is getting more common, of a location that ages and blends beer, but does not make its own wort. Or in this case, the owner is the brewer next door at Rip Current, and will be making wort there for aging at Stave & Nail…trying to come up with “true” categories is impossible! According to the website, once they do open, they will only be open one weekend per month.

Original 40 posted to social media that they will be opening their North Park brewery in June.

Another new venture for Vista: Dogleg Brewing will open in the same building as Eppig’s new production facility (later in 2019?).

Prohibition Brewing seems to be on a tear. In addition to their Fallbrook tasting room and their silver medal at the San Diego International Beer Competition, they are planning to open an additional tasting room later this year, location TBD.

Little Miss Brewing has selected a La Mesa location for their next tasting room.

Bolt Brewing has announced that they will also open a new tasting room (with restaurant and full bar) in West La Mesa, the city where their brewery already located. No indication of opening date yet, but they are already operating the space as a bar so perhaps renovations and rebranding won’t take too long.

I am presently aware of 21 brewery projects and 18 tasting room projects in planning for San Diego County, and based on the information I have available, I estimate that twenty or even thirty of those will open before the end of 2019.

I attended the Rhythm and Brews fest in Vista at the beginning of May. Great time, write up here. While there, I chatted with one of the owners of San Diego Brewing Company. Their original plan had been to open a second brew pub after they closed their North Park satellite in 2018, but while that is a long term goal they will probably pursue, there are no plans in progress yet. So I’ve removed that entry from the “In Planning” section of THE LIST.

Not Closing After All

Align Brewing put themselves up for sale a couple of months ago, in anticipation of the owner-brewer and his family moving to Hawaii. They planned to make their May 11th 2nd Anniversay party also a farewell party. Before that, the landlord threatened to shut them down altogether. I’m not sure what has happened since, but they stayed open, the party happened, it wasn’t a farewell, and they continue to operate.