How Many Breweries in San Diego? August 2018 Update 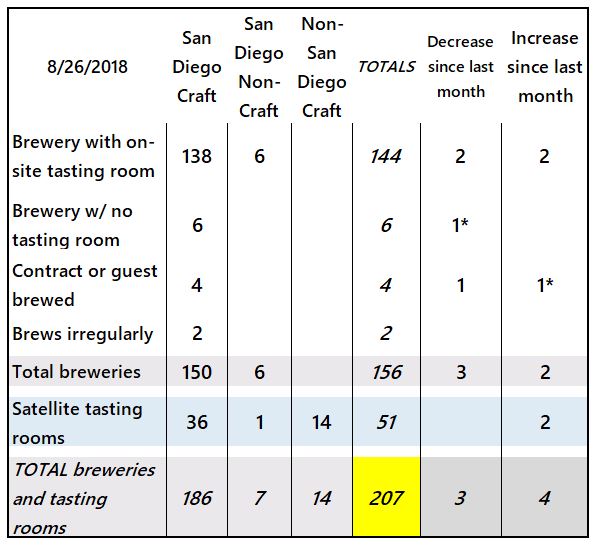 This month turned out to be surprisingly active. The overall total has increased by one location:

The complete LIST of beer locations is here. There are 150 craft breweries plus 6 non-craft breweries for a total of 156. There are 37 satellite tasting rooms (1 is non-craft) and 14 craft brew pubs where the beer is produced outside of San Diego County. The grand total is 207.

Intergalactic Brewing closed their doors at the end of July.

ChuckAlek Independent Brewers closed down their Ramona brewery at the end of July. (The North Park Biergarten will be open until September.)

I exchanged messages with the owner and learned that Oeuvre Artisan Ales, which was guest brewed at Intergalactic, is closed. He is pursuing another business until the opportunity is right.

Ketch Brewery in Kearny Mesa is soft opened. Their beer was served nextdoor at the Brigantine on a “pop-up basis” in July and August.

Until now I hadn’t counted the Oggi’s Express on the campus of SDSU as a location, but I should have. It is a satellite tasting room for a non-San-Diego-craft-brewery. So there is an increase of one in that category, but it has actually been open a long time.

I had had Acoustic Ales listed as a brewery with no tasting room, but that was incorrect. At least according to what I can gather, they are still building out their north county brewery/tasting room, and their beer (sold on tap and packaged) is contract brewed by Latchkey (the facility Acoustic used to operate).

Attitude Brewing in Barrio Logan appears to be very close to completing their tasting room build out.

This month I learned of two local breweries with multiple projects planned. First, Novo Brazil will open a brew pub at a second location in Chula Vista; according to feedback I got from West Coaster, this is apparently in addition to the upcoming National City location announced in January. Novo Brazil was number 8 on the Brewers Association list of fastest growing breweries in 2017, and it looks like they are continuing to grow at a rapid rate this year. They are the contract brewers for the recently released Xteca Mexican-American Lager, too.  Second, Ketch Brewing (mentioned above as a recently-opened brewery) will open two Ketch Grill & Taps tasting rooms in the near future: Point Loma very soon, and North Embarcadero in late summer 2019. Owned by the local Brigantine restaurant group, Ketch will supply house beers for 14 Brigantine locations. (Till now, their Brigantine Big Brew was contract-brewed by Karl Strauss, something I had never been aware of so there is no change to the list of contract brewed brands as a result.)

Three Frogs Brewing was announced as planning to open in Santee.

SouthNorte, which till now has been guest brewing on Coronado’s equipment in Bay Park, opened a pilot brewery and will serve their beers in Tijuana. Most of their brewing will still take place at Coronado’s Bay Park production brewery.

According to my records, there are 23 breweries in planning and 10 tasting rooms in planning. As far as I can tell, almost all of those are likely to come to fruition within the next year or two. That will bring us to a whopping total of 240 locations!