Pizza Port is good. But it should be great. #craftbeer #sandiego

I’ve now been to all four Pizza Ports in San Diego (there’s another one in San Clemente, too). I feel like there should be an Untappd badge for that.

The Carlsbad Village location of Pizza Port reminds me of a cross between the large, open Pizza Port Bressi Ranch spot (which is also the production brewery location) and the cosy, beachy original Pizza Port Solana Beach location. Two brick walls, really high ceilings with exposed wooden beams, a few video games, surfer art, lots of long communal tables filling the room, a brewing system visible, plus a long bar. It is a lively yet comfortable space. There are no pretenses to “interior design.” (Although the roof’s support columns ARE wrapped in rough rope–in an effort to resemble a pier piling, I think.) It is just a place to eat pizza and drink beer while you hang out. I have to say I was a little underwhelmed with the cleanliness of the place. The beer tanks, for example, were covered in streaks and marks, and the floor of the brewing area was very dirty.

I had a small “pizza of the month.” Great price ($10 or so) and I liked it. It was genuinely spicy, which isn’t always the case with supposedly-spicy pizzas. The quality of ingredients is good, but not as good as, say, Papa John’s. Imagine if Pizza Port’s pizza was as good as Tribute Pizza in North Park? They could take over the world.

As for beers, I got a flight of things made on-site in Carlsbad, then a pint of a red ale.

Cloudy with a Chance of IPA (6.5% AV). Tending dank with an earthy undertone, not very bitter. Light straw color. Not bad. Just not exciting.  3.25/5

Swami’s IPA (6.8% ABV). I had forgotten I’d had this before. It is pretty good! If it seems subtle for a West Coast IPA, that’s because this is one of the originals, from before the big hop bomb exploded. It tends piney on the finish, clean and refreshing. 3.75/5

For those who don’t know, in keeping with Pizza Port’s surfing theme, the beer above is named after Swami’s Beach, a famous surf spot that is in turn named after a nearby new-age meditation center. But the can still manages to have a probably-racist cartoon of a snake-charmer on the label. I vote for a complete overhaul of Pizza Port’s can art and graphic design in general. It is cluttered, hard to read, and dated.

My experience of the service was mixed. Even though the place wasn’t very busy mid-afternoon on a Tuesday, I had to stand at the register a long time (without being acknowledged) to order my pizza because the person taking orders was also making pizzas. She was frazzled but friendly by the time I did get to talk with her. When the pager went off and I went to pick up my pizza, the two workers at the window talking with each other and didn’t even look at me until I made a move to grab what I assumed was my pizza from among the meals waiting on the counter. The first bartender I interacted with was helpful with getting me a flight of beers made at this location; she checked on me once, then I didn’t see her again. I had to flag down the other bartender who came on shift to order another pint (he didn’t come see me at the end of the bar, even though my glasses were empty for quite a while), and then I couldn’t flag him down to pay and had to walk over to where he was. Patrons closer to the center of the bar seemed to get better service. 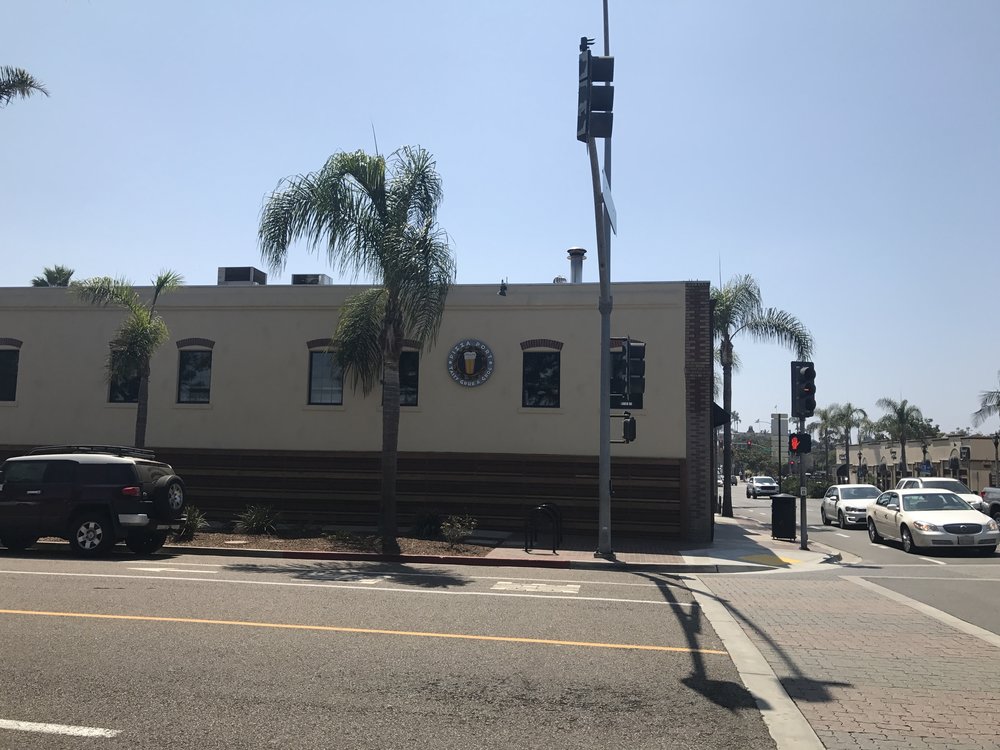 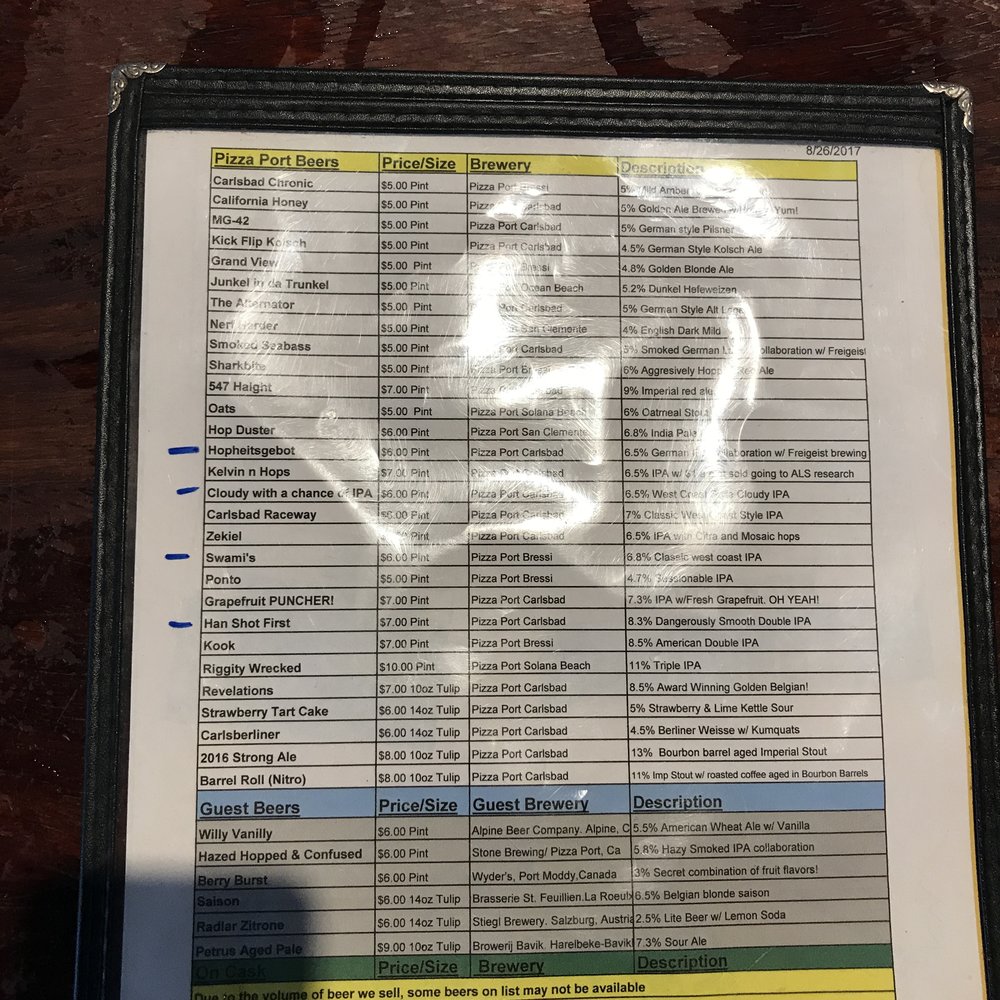 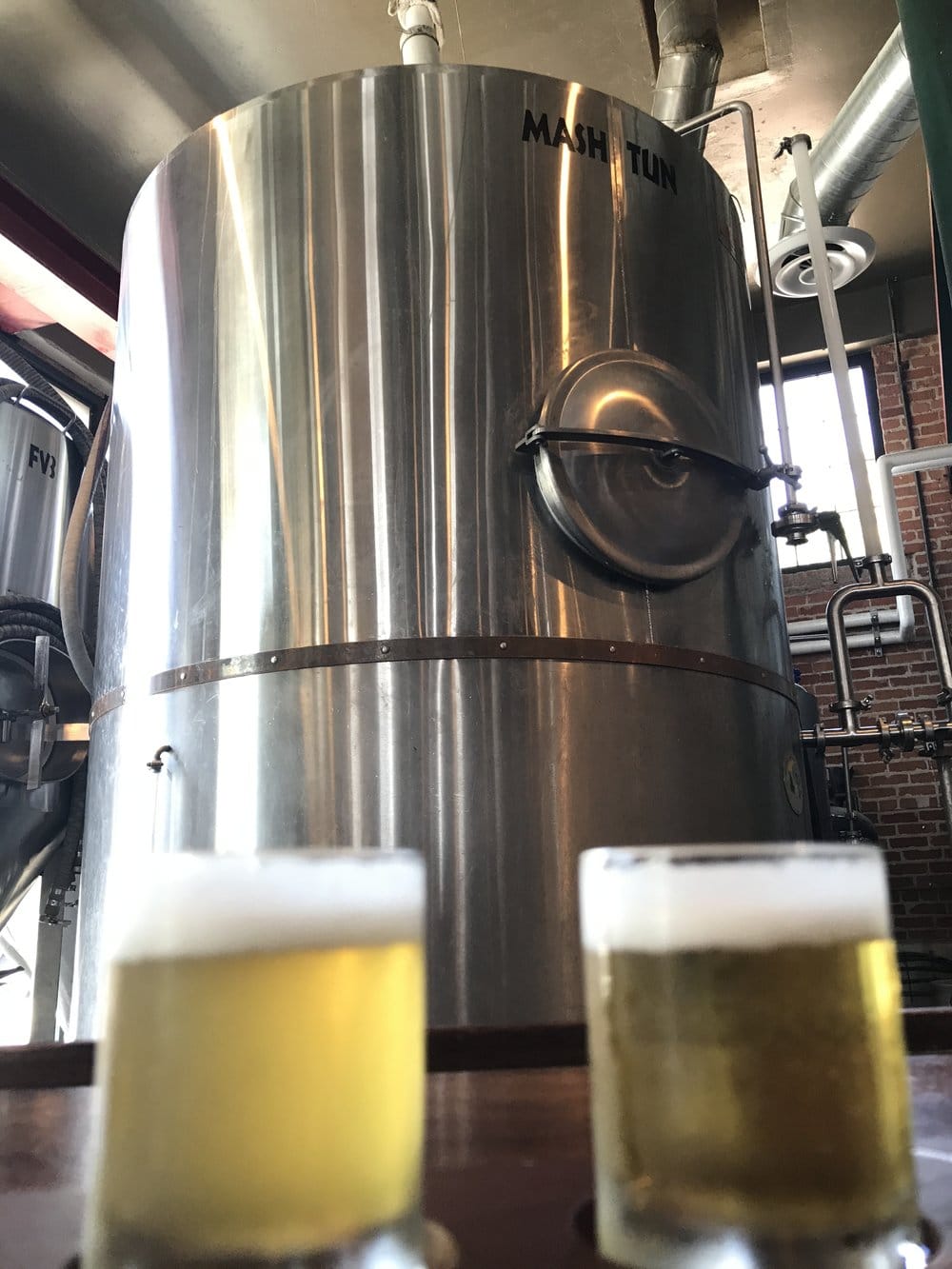 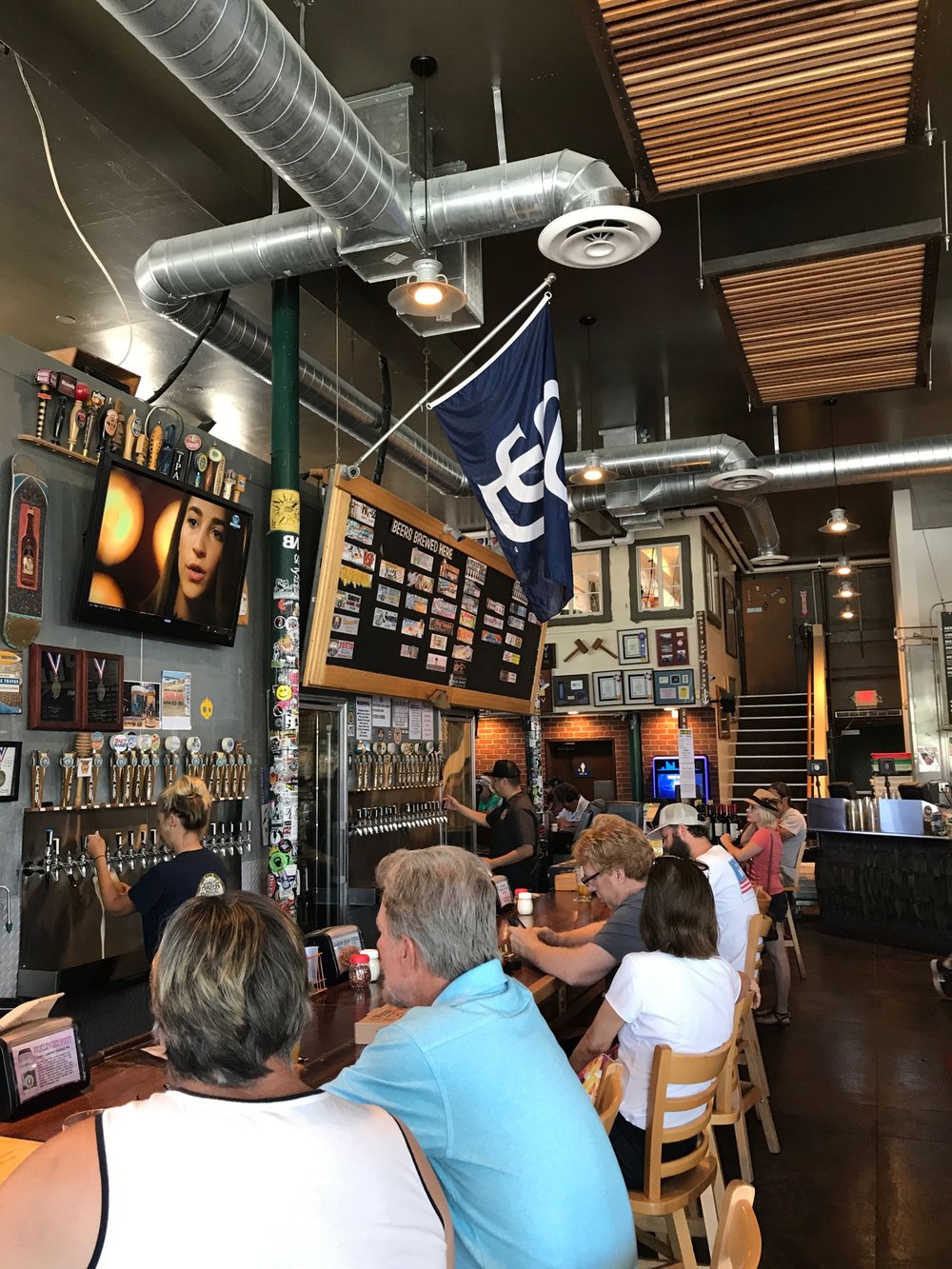 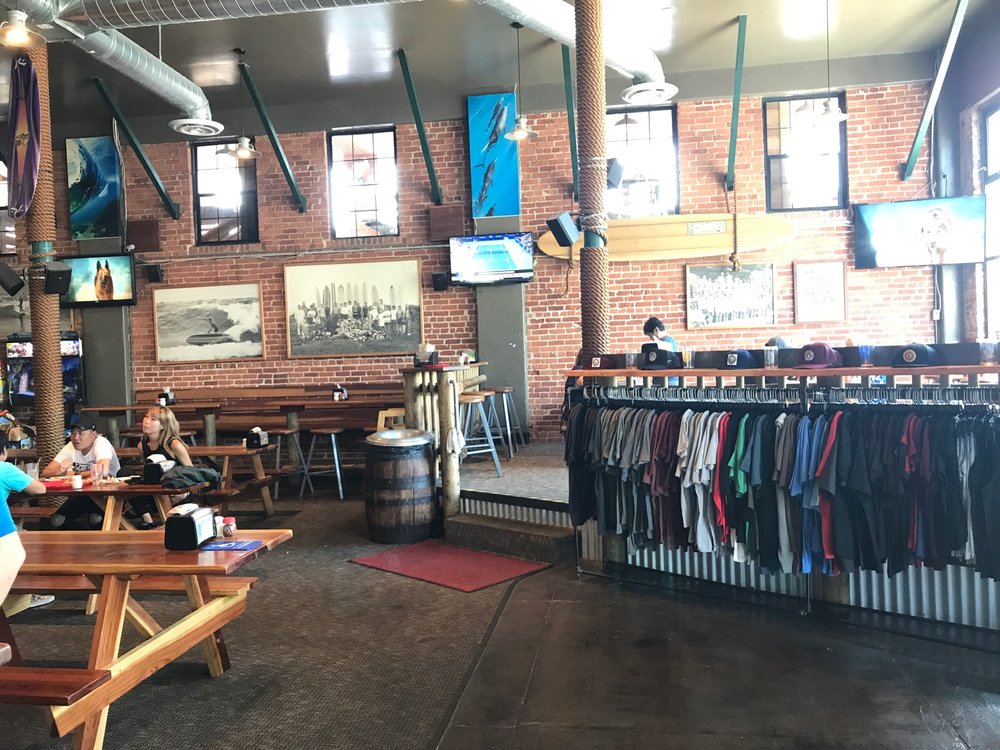 I like the feel of the Carlsbad Village. As with any beachy area, you’ll struggle to find parking. I ended up in the lot for 83 Degrees, which is kitty-corner to Pizza Port. (When I parked I thought 83 was a grocery store or something–turns out it is a beer-centric gastropub.)

My overall feeling–now that I’ve been to all the Pizza Port locations in San Diegoand have had their beer in cans and on draft at other locations, too–is that Pizza Port is good but they should be a lot better. I’m not sure if the brand is “tired” or resting on its laurels. And there are a lot of laurels (Pizza Port Carlsbad won “Large Brewpub of the Year” at the Great American Beer Festival in 2009. 2010 and 2011, for example). But a brewery chain with the history, success, loyal following and market position of Pizza Port should be great, not just good. At the moment, Pizza Port more closely resembles Oggi’s than Karl Strauss. (That’s a relevant comparison set because they all started around the same time.) There’s something that seems a bit amateur about the operation (service, cleanliness, interior design, graphic design, and the merchandise display all fall under that heading for me). Part of the problem, as I see it from outside, is that they have a way of doing things that served them well when they were starting out, but they seem not to have adapted and changed with the times and the way the modern craft beer scene has evolved. No doubt they are still making good money–beer and pizza near the beach is bound to do well no matter what. If it were my company, though, I would up the level of service, give the locations a face lift/modernization, cut the beer menu in half (there’s no point serving house beers that aren’t as good as the guest beers), increase the quality of the pizzas, re-do the graphic design aesthetic and work on consistency across the locations. To be clear, I’m not saying Pizza Port is bad. It is good. But it is only good when it should be great.