How Many Breweries in San Diego? December 2019 Edition 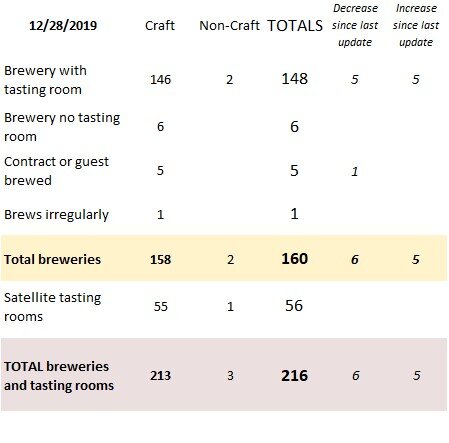 With ELEVEN changes to the list, Dec 2019 has to be one of the most active months ever in #sdbeer. #SanDiego saw 4 #breweries change categories, 1 open and 2 close. 160 breweries + 56 tasting rooms = 216 locations, one less than Nov. Look for SEVEN additions in early 2020!

There are now 158 craft and 2 non-craft breweries in San Diego County ( net -1), 55 craft and 1 non-craft tasting rooms (net +0), for a grand total of 216 locations (net +1). These small net changes mask one of the most active months for openings, closings and changes of status.

This means San Diego’s second largest brewery, and historically an extremely significant brewery for the craft beer and homebrewing scene, is once again a craft brewery. Technically, the sale hasn’t closed yet, but as soon as it does (as of Dec. 11, my latest info is March 2020), Ballast Point will be owned by a small, independent craft brewery and will qualify under the Brewers Association definition of craft brewery. But I’m going to shift them to the craft category now.

If you haven’t heard the slightly disturbing-sounding phrase “craft-on-craft action,” get ready, you will. As I mention here, breweries are trying all kinds of things to thrive in the current competitive environment.

In welcome news, Barrel Harbor Brewing is back from the dead. They have sold some of their equipment to clear their tax and other debts, and leased enough of it back to keep operating their Vista location. The re-opening party was on December 12, 2019. (+1 brewery with tasting room)

In early December, Fourpenny House in La Mesa announced their impending closure. On Dec. 22, a social media post said that day was to be their last. Their brewer had already moved on to 13 Point Brewing. (-1 brewery with tasting room)

Add to this, closure of Eppig Brewing’s North Park location (-1 brewery with tasting room) now that they have completely moved to their new (large and beautiful) Vista facility.

When Alta Brewing announced their closure last month, I should have also deleted the tasting room in planning that had been announced for them earlier this year. I’ve done so now.

Speaking of craft-on-craft action (see, I told you you’d hear that phrase again), here’s an announcement that would have caused a much bigger splash had it not been announced the very same day as the Ballast Point news. Latitude 33 Brewing has sold their brewery to Local Roots Hard Kombucha. According to the press release, Latitude 33 will now brew for distribution at Green Flash under an alternating proprietorship arrangement. But they will continue to operate the tasting room in Vista and to brew small batches on the pilot system there. It is a category-busting move that is nearly impossible to fit into my list, not to mention that it smacks of desperation even though apparently their Blood Orange IPA was the best selling San Diego canned beer at retail in June of 2019. I think this arrangement also says something about Green Flash, which clearly has a large amount of excess capacity if it can take on the production of Latitude 33—they sold their brewery because the 35,000 barrels they can produce there wasn’t enough to keep up with demand. Sandiegoville.com had the story (well, the press release) first. The Latitude 33 tasting room that had been in the works for the Continental Hotel downtown has been scrapped (-1 tasting room in planning; no other change to THE LIST just because I can’t figure out how to categorize it).

Lost Abbey announced the launch of their fourth brand, Tiny Bubbles, a gose finished with Brettanomyces in cans, aimed to be an alternative to hard kombuchas and hard seltzers. This is also an example of craft-on-craft action, since Lost Abbey bought the Tiny Bubbles brand from another craft brewery.

One of SouthNorte Beer Co.’s formerly-minority owners has bought out the original stakes of Coronado Brewing and the former CEO of Coronado who recently became president of AleSmith: John Gallegos is now majority owner. SouthNorte will continue to be contract brewed at Coronado’s Bay Park brewery under head brewer/part owner Ryan Brooks, so there is no change to THE LIST.

2020 looks like it will open with a bang: At least these seven locations are expected to open early in the year:

Prohibition Brewing will soon open their third location: the original brew pub is in Vista, the first tasting room is in Fallbrook and the second tasting room is about to open in Escondido. (West Coaster didn’t give a date but made it seem immanent.)

An Instagram follower sent me photos from The District in the Eastlake neighborhood of Chula Vista with signs announcing “Chula Vista Brewery coming soon”. That’s exciting news for them. I confirmed with CVB that this will be a second brewery with tasting room for them, and they will have a kitchen on site.

Long anticipated TapRoom Beer Company will finally open their brewery/tasting room/restaurant in University Heights in mid/late January according to a DM.

West Coaster reports that Beverage House in Escondido is also nearing completion. We’ve heard that several times over the last several years. And it still isn’t clear if that location will be a tasting room for Cismontane Brewing even though they are among the backers.

Puesto Mission Valley, along with house brewery Puesto Cerveceria, was originally planned to open in fall 2019. A Dec. 5 post on their Facebook page now says they will open in early 2020.

Ebullition Brewing has a new restaurant and tasting room opening in Bressi Ranch “very soon” according to social media posts, but there’s no indication if that means days or months.

Bay City Brewing had intended to open their East Village tasting room by the end of 2019, which I guess means it will be open early in 2020.