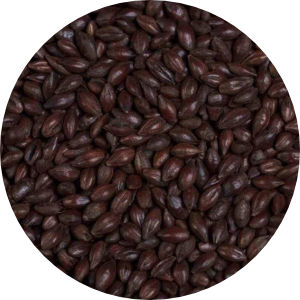 Black malt (sometimes called black patent malt) is made from fully-modified pale malt, containing around 5% moisture that adds an acird or bitterness to your brew. Black malt primarily gives a highly roasted flavor, that carries some bitterness and acidity. Like all dark grains, black malt is an acidic malt. A mash of black malt only would yield a pH value under 4. In beers that use a substantial amount of it, adding carbonates - either from calcium carbonate (chalk) or sodium bicarbonate (baking soda) to your water may be needed to keep the mash in the proper range.

Black malt is made from fully-modified pale malt, containing around 5% moisture. The malt is then placed in a roasting drum and rehydrated and kilned at 221–233 °C (420–450 °F) for up to four hours. Black malt actually has a 6% moisture content that is higher than most other specialty grains. The moisture content gives the malt some added stability while it quickly cools the malt.

Unlike pale malts, black patent malt is nearly sterile. Some commercial breweries, in fact, use black malt (or black malt flour) in their fermentors rather than the mash tun.

These are the common ranges that we've seen with Black (Patent) Malt over the years. Each manufacturer can have slightly different qualities, so these ranges are based on a combination and average.